From Ars Technica by Jennifer Ouelette

The so-called "Draupner wave" was recorded by an oil drilling platform in 1995.
In 1995, a powerful rogue wave slammed into an offshore gas pipeline platform operated by Statoil in the southern tip of Norway.
Dubbed the "Draupner wave," it generated intense interest among scientists, since the platform's various sensors and instruments provided precise details about the wave's dynamics.
Rogue waves had long been considered a myth, so those readings—combined with damage to the platform consistent with a wave some 84 feet high—provided crucial evidence for the phenomenon

The phenomenon of rogue waves, which researchers have recreated in testing tanks, can now be predicted for the first time and has been found to be triggered by two waves crossing over at the key angle of 60 degrees
source : FloWave Ocean Energy Research facilty (Edimburg Univ)

It wasn't long before scientists were attempting to recreate rogue waves in the laboratory, the better to understand the mechanisms behind how they form in the first place.
Now a team at the University of Oxford in England has successfully recreated the "Draupner wave" in a circular water tank, according to a new paper in the Journal of Fluid Mechanics, shedding further light on the mechanisms that produced it.
Bonus: the wave profile bears a striking resemblance to The Great Wave off Kanagawa, a famous 19th-century woodblock print by Japanese artist Katsushika Hokusai.

Close-up of the event, taken from Paul Taylor's paper.

"The measurement of the Draupner wave in 1995 was a seminal observation initiating many years of research into the physics of freak waves and shifting their standing from mere folklore to a credible real-world phenomenon," said co-author Mark McAllister of the University of Oxford.
"By recreating the Draupner wave in the lab, we have moved one step closer to understanding the potential mechanisms of this phenomenon."

A rogue wave is usually defined as a wave that is 2.2 times taller than the average waves around it.
They are notoriously difficult to predict and can appear quite suddenly, making them very dangerous to ships and deep-sea drilling platforms.
In 1978, a supposedly "unsinkable" cargo ship called the MS München was lost at sea.
Analysis of the floating wreckage that was recovered indicated a powerful rogue wave (possibly more than one) was the most likely culprit.

Rogue waves can also form in lakes, like Lake Superior's "Three Sisters" phenomenon (three large waves hitting a ship one after the other before the first wave can clear).
This is believed to have caused the sinking of the SS Edmund Fitzgerald, immortalized in a 1975 ballad by Gordon Lightfoot.

Despite numerous anecdotal eyewitness accounts about rogue waves, there wasn't any hard scientific evidence for them, so such claims were dismissed as myths or legends.
In fact, a French naval officer in 1826, Jules Dumont d'Urville, reported seeing a 108-foot-high wave in the Indian Ocean and was roundly ridiculed by physicist François Arago for his trouble.
At the time, scientists didn't think waves could be higher than 30 feet.

In the early 1960s, the National Institute of Oceanography reported measuring a 67-foot wave, cited in a seminal 1964 paper by Laurence Draper on the subject.
"Modern research has confirmed that such monsters can occur, and that wave heights can exceed by an appreciable amount the maximum values which have been accepted in responsible circles," Draper wrote.

But scientific evidence was still mostly lacking, until a rogue wave was recorded slamming into a platform in the North Sea in 1984.
Satellite and radar imagery over the past few decades further confirmed that rogue waves are very real.

Rogue waves are a combination of the energy of several ordinary waves focused into one spot.
Early lab attempts to recreate rogue waves used long, straight wave tanks and relied on paddles or similar mechanical means to create different kinds of waves.
Those experiments revealed that not just any chance combination of multiple waves is sufficient to produce a rogue wave.
Rather, the waves start out with roughly the same dominant wavelength, but a small perturbation will make one wave a bit higher than the others.
This causes the waves behind it to speed up, while the waves in front slow down.
Energy piles up in a positive feedback loop until the wave with the initial perturbation "goes rogue."

Still images of the reconstruction of the Draupner wave,
showing plunging breaking that gives an upper limit to how high a wave can get.

Reconstruction of the Draupner wave, this time shown breaking along the confluence of the crossing waves, producing a jet with both plunging and upward motion. 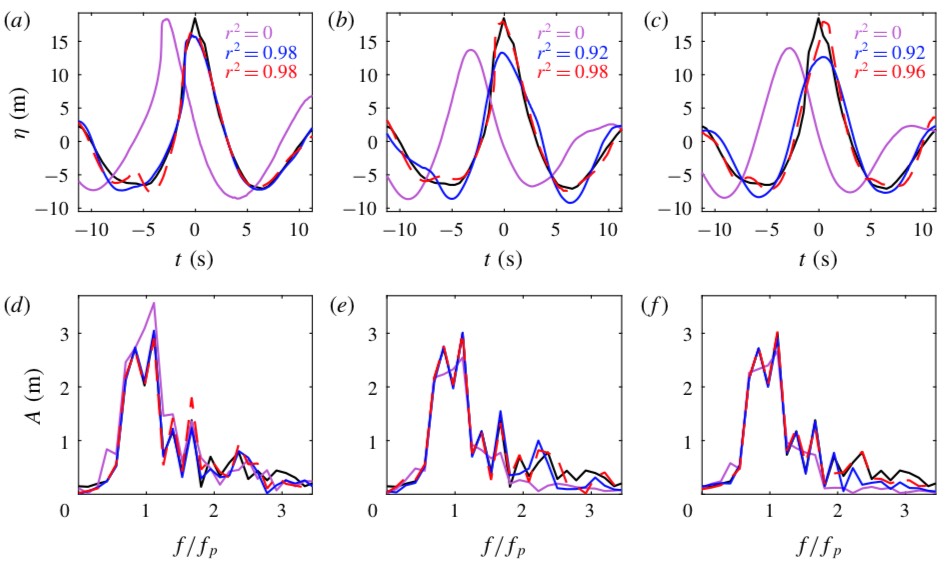 The black lines denote real measurements from the Draupner platform in 1995.
The red dashed lines are the final experimental results in the lab.
DOI: Journal of Fluid Mechanics, 2019. 10.1017/jfm.2018.886 (About DOIs).

But ocean waves are not produced by mechanical means; they're the result of wind interacting with the surface of the water.
And it's tough to recreate those precise dynamics with long, straight water tanks.
So in 2017, physicists built at large, ring-shaped water tank (5 meters in diameter) at the University of Turin in Italy, using fans to blow air over the surface to simulate wind.
They observed the same "self-focusing" effect in the rogue waves produced in the tank.

In this latest experiment, the Oxford scientists generated two sets of waves in a circular water tank at the University of Edinburgh and made sure they crossed each other at various angles, the better to recreate the conditions under which the Draupner wave had formed.
In these conditions, the wave doesn't break like you'd normally expect.
Wave breaking usually serves to limit a wave's maximum height, but that limiting factor doesn't occur when waves cross each other at large angles.

The sweet spot turned out to be an angle of 120 degrees: when the groups of waves crossed at that angle, they formed a wave that scaled neatly with the height and length of the Draupner wave (albeit at 1/35th the size of the original). 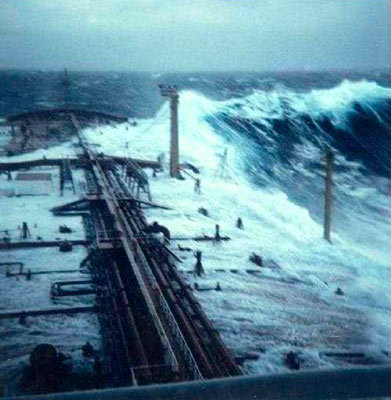 This rare photo of a rogue wave was taken by first mate Philippe Lijour aboard the supertanker Esso Languedoc, during a storm off Durban in South Africa in 1980.
The mast seen starboard in the photo stands 25 metres above mean sea level.
The wave approached the ship from behind before breaking over the deck, but in this case caused only minor damage.
The mean wave height at the time was between 5-10 metres.
courtesy ESA

All this research matters, because a better understanding of how powerful rogue waves form could help scientists make better predictions as to when they are likely to occur.
That means ships and offshore drilling platforms can be better prepared for such an event.
"Not only does this laboratory observation shed light on how the famous Draupner wave may have occurred, it also highlights the nature and significance of wave breaking in crossing sea conditions," said co-author Ton van den Bremer.