The final resting place of the USS Lexington, a World War II-era aircraft carrier, has been discovered 76 years after it was sunk in the Coral Sea, more than 500 miles off the coast of Australia.
One of the first aircraft carriers ever built by the U.S., the Lexington sank during the Battle of the Coral Sea in May of 1942.
The ship went down with 216 crew members and 35 aircraft.
But 2,770 crewmen and officers were rescued by awaiting U.S. ships.
The Lexington was the first aircraft carrier to be sunk in history.
The Battle of the Coral Sea stopped an important Japanese advance on Australia and New Guinea, and one month later the Battle of Midway permanently turned war in favor of the U.S.

From National Geographic by Elaina Zachos

The U.S.S. Lexington has finally been found, decades later and thousands of feet underwater.

The crew of Research Vessel Petrel (R/V Petrel), the exploration ship of billionaire and Microsoft co-founder Paul Allen, discovered the wreckage of the World War II-era aircraft carrier Monday.
It was found about two miles below the surface of the Coral Sea and more than 500 miles off the eastern coast of Australia. 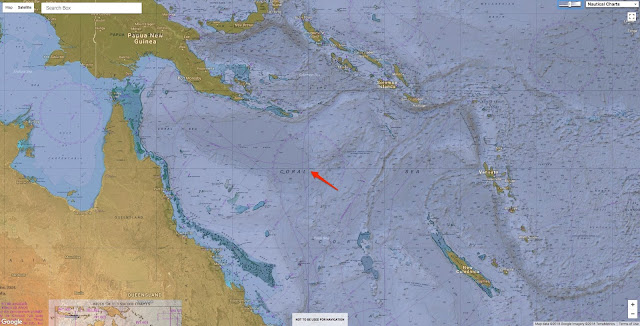 Position of the shipwreck in the GeoGarage platform (AHS nautical chart)

The Lexington is one of the first aircraft carriers built by the U.S.
It went down in 1942 with 216 crewmembers and 35 aircraft on board, and it's finally been found.

Anti-aircraft artillery helped the U.S.S. Lexington in battle against Japanese ships.
The aircraft carrier, "Lady Lex" was found more than 3,000 meters below the surface, resting on the floor of the Coral Sea more than 500 miles off the eastern coast of Australia.

Allen is the son of a WWII veteran, and the R/V Petrel team had been planning to locate the Lexington for about six months after they were given coordinates for where the sunken ship might be.
For this, they retrofitted their 250-foot vessel, originally deployed to the Philippine Sea in 2017, with subsea equipment that can reach depths up to three and a half miles.
(Read: "How Microsoft Billionaire Found Largest Sunken Battleship")


“Lady Lex” went down with 35 planes. So far, #RVPetrel has found 11 of them. Here’s a look at two Douglas TBD-1 Devastators, resting on top of each other, and a close up of a Grumman F4F-3 Wildcat. https://t.co/19CuqvopwB pic.twitter.com/FEWZYD0iEo
— Paul Allen (@PaulGAllen) March 6, 2018

"We're dealing with an environment out here that is very harsh," Robert Kraft, Allen's director of subsea operations, told media.
"It's thousands of meters deep and it's very unpredictable. We're putting, you know, a lot of electronics and high voltage down in very deep waters and sea waters where it shouldn't belong, and so that always presents challenges."

First commissioned as a battlecruiser, the Lexington was launched as an aircraft carrier in 1925.
On May 4, 1942, the ship fought with the U.S.S. Yorktown against three Japanese carriers in the first carrier-on-carrier battle in history.
The Lexington sustained multiple hits from bombs and torpedoes until succumbing on May 8.
A secondary explosion had set uncontrollable fires raging through the vessel, triggering the call to abandon ship.
The U.S.S. Phelps delivered the final torpedoes that finally sank the ship.
(Read: "Wreckage of WWII-Era Warship U.S.S. Indianapolis Found After 72 Years")

With U.S. ships nearby, 2,770 crewmen and officers were rescued from the doomed vessel.
Among them was the captain and his dog Wags, the ship's ever-present mascot.
This episode was the first aircraft carrier casualty in history. 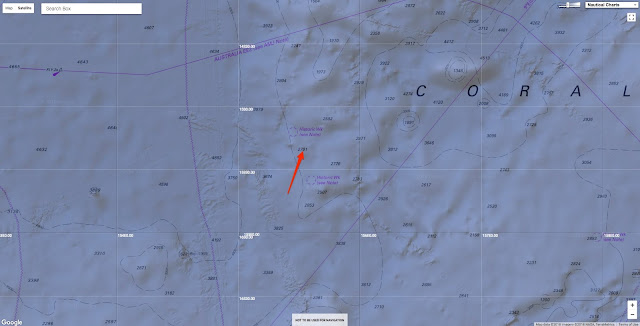 Several ships went under along with the Lexington.
The U.S.'s Sims, Neosho, and Yorktown succumbed to the waters.
The Japanese carrier Shōhō also went under, and the fleet carrier Shōkaku sustained significant damage.
The Battle of the Coral Sea halted a Japanese advance, and it also marked the first time two dueling ships never came within sight of each other.

Allen's other expeditions have yielded discoveries.
His team helped to find the U.S.S. Ward in November 2017, U.S.S. Indianapolis in August 2017, and the U.S.S. Astoria in February 2015.
He also helped to find the Japanese battleship Musashi and the Italian destroyer Artigliere in March 2015 and 2017, respectively.
(Read about how the billionaire's 300-foot yacht allegedly damaged protected coral reefs.)

Underwater footage shows the large guns and blast shields the carrier once brandished, as well as some airplanes strewn about the ocean floor.
Three-quarters of a century submerged underwater has taken a toll on the once-seaworthy vessel, but it is doubtlessly a notable historical and archaeological find
"It's kind of all this effort you've put in has paid off and for me, personally, I feel a bit of relief and I look forward to the next part of it, which is exploring the wreck," pilot and researcher Paul Mayer told media.
"And then very soon after that, I look forward to going and looking for the next one."