Tracking recent environmental changes, with 10 essays prepared by an international team of 63 scientists from 13 different countries and an independent peer-review organized by the Arctic Monitoring and Assessment Programme of the Arctic Council.
see NOAA

One of the ways our planet manages its heat budget is by storing solar energy in the oceans.
In recent years, the Arctic has been taking in more than its usual share of heat energy, which could be bad news for our steadily warming planet.

This latest dire climate update was presented by NASA scientists here at American Geophysical Union meeting on Dec. 17.
The map above was made using heat-sensing, satellite-borne instruments that measure the rate of solar radiation change.
In the Arctic, the rate of heat absorption has increased by more than 10 Watts of energy per square meter since 2000. In some areas—like the big red blob representing the Beaufort Sea north of Alaska—this rate has increased as much as 45 Watts per square meter. 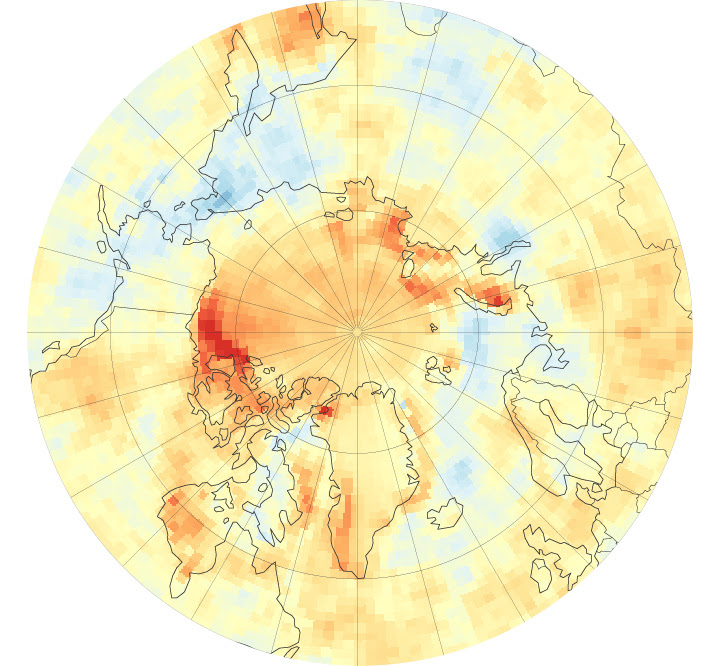 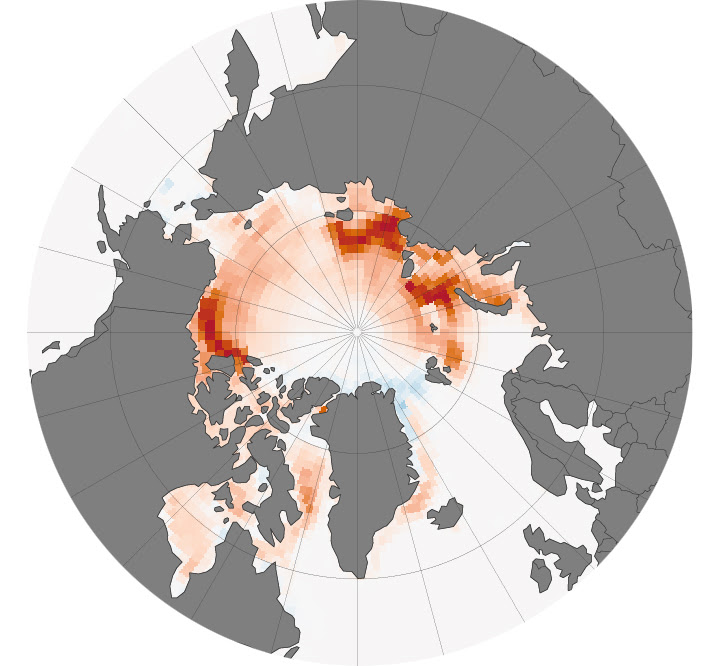 The Arctic Ocean is absorbing more of the sun's energy in recent years as white, reflective sea ice melts and darker ocean waters are exposed.
The increased darker surface area during the Arctic summer is responsible for a 5 percent increase in absorbed solar radiation since 2000.
Image Credit: NASA Goddard's Scientific Visualization Studio/Lori Perkins

Not all of the sun’s energy sticks around on Earth.
Different land surface types bounce it off back into space, while others absorb it. Ice, snow and clouds are really reflective.
Water varies, depending on the angle of the sun.
For the past 15 years, NASA has been using a satellite sensor called CERES (on three different satellites, Terra, Aqua and Suomi-NPP) to calculate how much solar energy is being absorbed versus bounced back into space.

Every summer, the Arctic ice cap partially melts away, and freezes again in the winter, covering more or less (OK, mostly less) the same area it has in the past.
But, because recent years have had record levels of sea ice loss, a lot of that winter ice is barely a year or two old, and less than 6 feet thick.
When summer comes back around, this thin ice melts quickly, exposing the ocean below to solar radiation.
Since 1982, the average onset of the annual summer melt season has moved up by seven days.

As scientists continue to monitor the Arctic for changes in the face of climate change, they recently discovered some staggering new information - temperatures in the region are rising twice as fast as anywhere else on Earth, a new NOAA-led report says.
(Photo : NASA/Kathryn Hansen)

This creates a solar radiation feedback loop.
The thin ice melts earlier in the summer when the sun is higher in the sky, which exposes the heat-sinking ocean surface to collect even more solar radiation.
This causes a feedback loop, as more heat is absorbed into the ocean, which in turn causes more melting.
Currently, the average temperatures in the Arctic are rising twice as fast as the rest of the globe.

In addition, the researchers originally thought the loss of sea ice would result in more clouds forming over the Arctic, which would make up for some of the lost sea ice by reflecting back sunlight (the rest of the world’s oceans are covered by clouds much of the time).
However, the cloud cover isn’t filling in, and is in fact being quite unpredictable.
This is contributing to the overall rate of solar energy absorption.

Atmospheric scientist Jennifer Kay of the University of Colorado, a collaborator on this research, says it’s too soon to use CERES data to confirm any long term climate trends.
“Climate is usually considered to be a 30 year average,” she said at a press conference.
As CERES has been collecting Arctic solar energy data since 2000, this research is only about halfway done.
Posted by geogarage at 1:29 AM