A giant squid is capturing the imaginations of scientists in Japan. Squids are one of the ocean's most mysterious creatures.
Little is known about how they live but these still photos taken from the world's first moving images of a giant squid show the creature in its natural habitat hundreds of meters under the ocean.
The video was shot last July near Japan's Ogasawara islands, 620 miles south of Tokyo.
It shows a three-meter-long cephalopod. Zoologist at Japan's National Museum of Nature and Science Tsunemi Kubodera led the 40-day expedition.


Scientists and broadcasters said Monday they have captured footage of an elusive giant squid roaming the depths of the Pacific Ocean, showing it in its natural habitat for the first time ever. 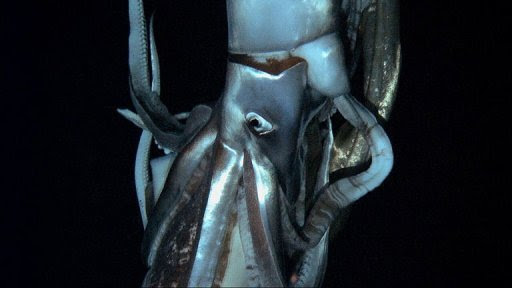 Screen grab from footage captured by NHK and Discovery Channel taken in July 2012 shows a giant squid in the sea near Chichi island.
The squid was spotted at a depth of 630 meters using a submersible in July, some 15 km east of Chichi island in the north Pacific Ocean.

Japan's National Science Museum succeeded in filming the deep-sea creature at a depth of more than half a kilometre (a third of a mile) after teaming up with Japanese public broadcaster NHK and the US Discovery Channel.

A giant squid has been videotaped in its deep-ocean habitat for the first time.
This is an excerpt from Discovery Channel's Monster squid: the giant is real, which premieres on January 27, 2013 at 8PM ET/PT as the season finale of Curiosity.
The scientists and filmmakers undertook 55 submersible dives, totaling 285 hours, some at depths greater than 3,000 feet, to capture this encounter with a giant squid, estimated to weigh 600 pounds.

The massive invertebrate is the stuff of legend, with sightings of a huge ocean-dwelling beast reported by sailors for centuries.
The creature is thought to be the genesis of the Nordic legend of Kraken, a sea monster believed to have attacked ships in waters off Scandinavia over the last millennium.

A Zoologist at the Smithsonian Institution shares the history of the Kraken.
(other video)

Modern-day scientists on their own Moby Dick-style search used a submersible to descend to the dark and cold depths of the northern Pacific Ocean, where at around 630 metres (2,066 feet) they managed to film a three-metre specimen.
After around 100 missions, during which they spent 400 hours in the cramped submarine, the three-man crew tracked the creature from a spot some 15 kilometres (nine miles) east of Chichi island in the north Pacific. 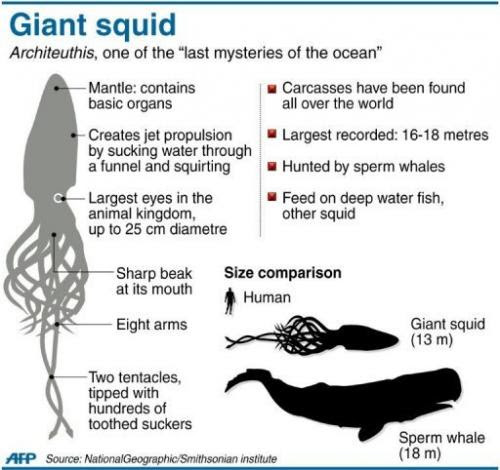 Graphic fact file on the giant squid.
Scientists say they have succeeded in filming the elusive deep-sea creature in its habitat for the first time.
(Architeuthis show to approximate scale next to the Shinkai 6500, a famous 31-feet-long Japanese manned research submersible : image)

NHK showed footage of the silver-coloured creature, which had huge black eyes, as it swam against the current, holding a bait squid in its arms.
For Kubodera it was the culmination of a lengthy quest for the beast.
"It was shining and so beautiful," Kubodera told AFP.
"I was so thrilled when I saw it first hand, but I was confident we would because we rigorously researched the areas we might find it, based on past data."
Kubodera said the creature had its two longest arms missing, and estimated it would have been eight metres long if it had been whole.
He gave no explanation for its missing arms.
He said it was the first video footage of a live giant squid in its natural habitat—the depths of the sea where there is little oxygen and the weight of the water above exerts enormous pressure. 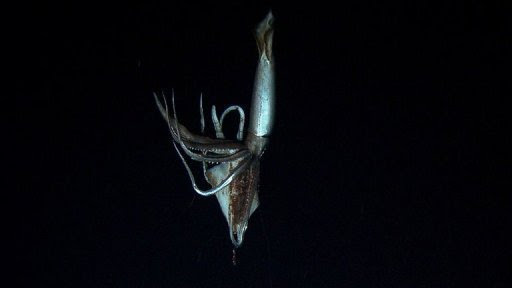 Screen grab from footage captured by NHK and Discovery Channel in July 2012 shows a giant squid holding a bait squid in its arms in the sea near Chichi island.
Scientists used a submersible to get them into the depths of the Pacific Ocean, where at around 630 metres they managed to film the giant squid.


Kubodera, a squid specialist, also filmed what he says was the first live video footage of a giant squid in 2006, but only from his boat after it was hooked and brought up to the surface.

"Researchers around the world have tried to film giant squid in their natural habitats, but all attempts were in vain before," Kubodera said.
"With this footage we hope to discover more about the life of the species," he said, adding that he planned to publish his findings soon.
Kubodera said the two successful sightings of the squid—in 2012 and 2006—were both in the same area, some 1,000 kilometres south of Tokyo, suggesting it could be a major habitat for the species.
The giant squid, "Architeuthis" to scientists, is sometimes described as one of the last mysteries of the ocean, being part of a world so hostile to humans that it has been little explored.
Researchers say Architeuthis eats other types of squid and grenadier, a species of fish that lives in the deep ocean.
They say it can grow to be longer than 10 metres.
NHK said it and the Discovery Channel are scheduled to air special documentaries on the find later this month.