NO CRUISESHIP apart from Costa Concordia has come into close proximity with Giglio
in the last six months, according to an analysis of Automatic Identification System data
by Lloyd’s List Intelligence.
Higher size image
From Llloyds

But cruise line insists Friday’s deviation from route was unauthorised.

EXCLUSIVE analysis of Lloyd’s List Intelligence tracking data shows that Costa Concordia sailed within 230 m of the coast of Giglio Island on a previous voyage, slightly closer to the shore than where it subsequently hit rocks on Friday.

The wreck of Costa Concordia has been added to OpenSeaMap
The cruiseship, which capsized off the Italian coast, had previously changed course to get closer to Giglio on the night of August 14 last year — for La Notte di San Lorenzo, the night of the shooting stars, owners Costa Cruises have said.

Speaking at a news conference on Monday, the company’s chief executive officer, Pier Luigi Foschi, stressed that the decision was taken under the authorisation of the local martime authority and the permission of Costa, after the route was reviewed.
He also claimed that the vessel was never closer than 500 metres from the coast at any pont in the voyage.

Corrected track of Costa Concordia showing why captain might have thought he was safe
“As can be seen in this picture are the two AIS signal recorded immediately before and after a rocky area.
[The} Ship is between the two signals [but whether it actually] followed this route is not fully known…
Of course, Marine VDR (Voyage Data Recorder – Black Box), except for the records [are still unavailable]
This [new information has been interpolated by using the accident rate [speed of ship as revealed by AIS] , route, bow direction, the radius of rotation and by evaluating the effects of wind [prior to the collision].
According to this last situation, [his ship had entered into] danger [to] the ship where the rocks near the eastern side of the pass…where he thought was clear water…”

New calculated tracks from ShippingExplorer AIS data overlayed
on Garmin BlueChart maps (source : Gemi Trafik)Master is reported as admitting he misjudged his turn to the north
to run parallel the coast.

The route taken on January 13, however, was described by Costa Cruises as a deviation from the pre-planned route to make a manoeuvre that was “unauthorised, unapproved and unknown to Costa”.

Both routes passed within a few hundred metres of each other and the tracking data, obtained through Lloyd’s List Intelligence proprietary land based AIS receivers, proves that the vessel would have been less than 200 m away from the point of collision when it took the previously authorised route.
The route also took the vessel far closer than the 500 metres claimed by Costa Crociere.

Satellite picture from Digital Globe (17/01/2002)
Meanwhile, the UK Hydrographic Office has issued a statement, declining to comment on whether Costa Concordia was using one of its charts.
However, UKHO has confirmed that Italian charts of the area around Giglio are available on a larger scale than the 1:300,000 charts it issues.

Although this might seem to be a technical matter, the master of the vessel, who is under investigation for suspected manslaughter, has blamed the casualty on the cruiseship hitting an uncharted rock.
This could make charts critical to the case for the defense, should the master face a criminal prosecution.

This picture released on Wednesday, January 18, 2012 by the Italian Space Agency (A.S.I.) was taken on Saturday, January 14, 2012, about nine hours after the luxury cruise ship Costa Concordia ran aground off the island of Isola del Giglio, Italy.
It shows the hulk of the ship (bright spot, bottom center) surrounded by rescuers and investigators' boats.
Satellites are being used to monitor the area while authorities are preparing to remove the fuel from inside the vessel.
(AP Photo/ASI)
No rock is shown on the UKHO chart at the position in which Costa Concordia sank.
The UKHO said: “This is a regrettable incident where life was lost and a full investigation will be undertaken by the Italian maritime authorities. A report will be published following that investigation.
“The UKHO expects that the report will contain information about the chart or charts used by the vessel at the time of the incident, and also expects the report to describe what features were present on the charts being used.
“The UKHO does not wish to prejudice the investigation, and so will not enter into speculation about which chart may have been in use by the vessel at the time of the incident. 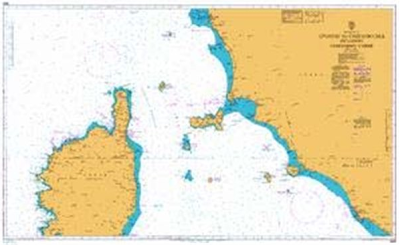 BA 1999 Livorno to Civitavecchia including Northern Corse
“The UKHO’s most detailed paper chart of the area in which the vessel grounded is Chart 1999 at a scale of 1:300 000, which is up to date for all relevant information known to the UKHO. It should be noted that this small scale chart is considered to be unsuitable for close inshore navigation.
“Larger scale paper charts, produced by the Italian hydrographic service, are available. The official digital charts are Italian with larger scales available.” 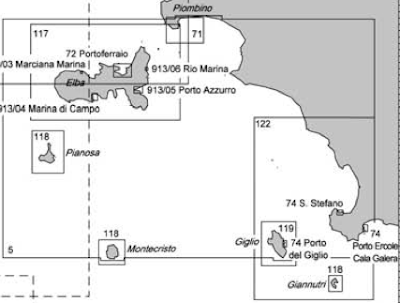 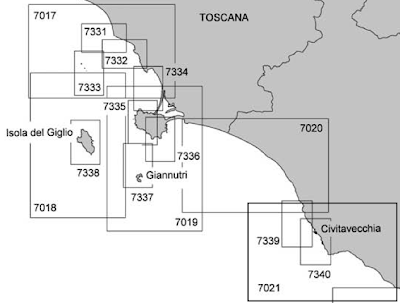 Nautical maps available at the IIM