For the first time, astronomers have found water on a comet that's a chemical match for water on Earth, a new study says.
The discovery backs up theories that water-rich comets helped fill ancient Earth's oceans.

Planet-formation models indicate that early Earth was much too hot to sustain liquid water on its surface, making the origin of Earth's oceans a mystery.
So scientists speculated that our planet's surface water came from comets that slammed into Earth once the planet had cooled.

This theory was dealt a serious blow in the 1980s, however, due to measurements of the ratio of normal to "semiheavy" molecules—the D/H ratio—in comet water.
In a semiheavy water molecule, one hydrogen atom (H) is replaced with a heftier version called deuterium (D).
All water in nature has a D/H ratio, and since deuterium is a very stable atom, this ratio can go unchanged for eons.
Since the 1980s researchers have found that several comets in our solar system have D/H ratios that are very different from that of Earth's water.

Those results indicated that, at best, only about 10 percent of Earth's water could have come from comets, with the rest probably coming from water-rich asteroids, explained study leader Paul Hartogh, an astronomer at the Max Planck Institute for Solar System Research in Germany. 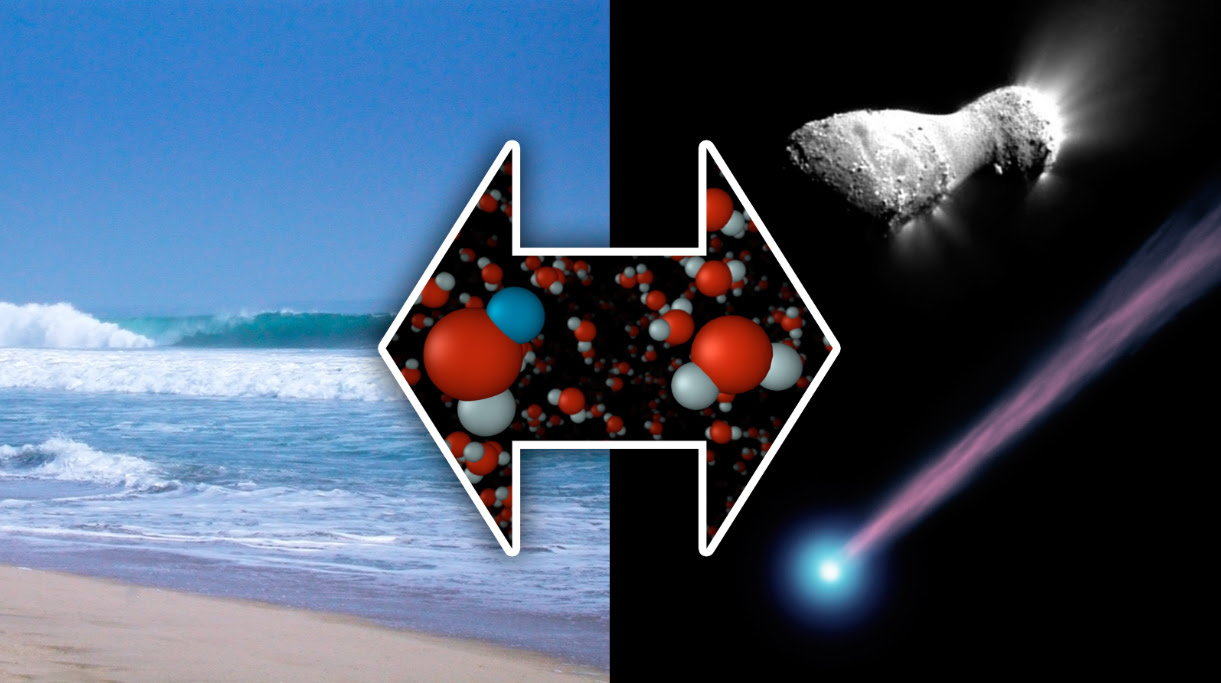 Measurements from the Herschel Space Observatory show that comet Hartley 2, which comes from the distant Kuiper Belt, contains water with the same chemical signature as water in Earth's oceans.
The findings may help explain how Earth’s surface ended up covered in water. CREDIT: NASA/JPL-Caltech/R. Hurt
Kuiper Belt Comet a Match

In the new study, Hartogh and his team used the European Space Agency's Herschel Space Observatory to examine the D/H ratio of the comet 103P/Hartley 2.
The results show that Hartley 2's water is very similar to that of Earth.
(See pictures: "First Close-ups of Peanut-Like Hartley 2.")

Hartley 2 is a so-called Jupiter family comet, because its orbit takes the comet close to the orbits of Jupiter and the other gas giants.

Importantly, computer simulations suggest that Hartley 2 originated from the Kuiper belt, a region beyond the orbit of Neptune that is filled with comets and other icy remnants from the formation of our solar system.
This would suggest that the larger group of comets that helped form Earth's oceans originally came from the Kuiper belt. (Related: "Three New 'Plutos'? Possible Dwarf Planets Found.")

By contrast, the comets with D/H ratios that didn't match Earth's are thought to have originated in the Oort cloud, a reservoir of billions of comets that astronomers think exists far beyond the Kuiper belt.

Finding a comet that's a match for Earth suggests more such matches may be out there, which means much more of our planet's water could have come from comets after all, Hartogh said.

But exactly how much is still unclear and will require further studies.
"We cannot give a number," Hartogh said.
"In principle, all of Earth's water may come from comets. However, it is still possible that a large—or the largest—fraction came from asteroids."