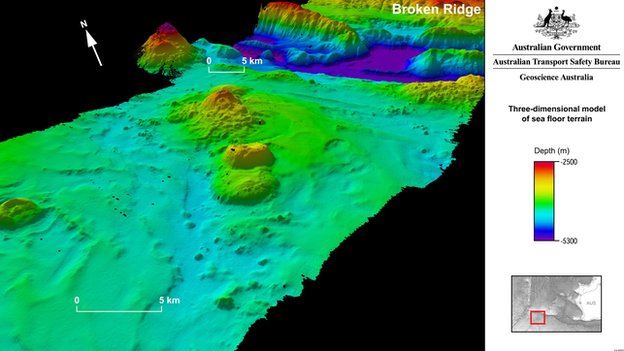 The floor of the ocean is dotted with the remains of extinct volcanoes, known as seamounts

From BBC by Richard Westcott


The team looking for missing flight MH370 has released detailed images of the seabed - revealing features such as extinct volcanoes and 1,400-metre depressions for the first time.
The collection of data from one of the most secret parts of the world is a by-product of the search.
Until now there were better maps of Mars than of this bit of the sea floor. The Malaysian Airlines plane vanished without trace on 8 March with 239 people on board.
Twenty-six countries have helped look for the Boeing 777, but nothing has ever been found.
The aircraft was flying from the Malaysian capital, Kuala Lumpur, to Beijing. 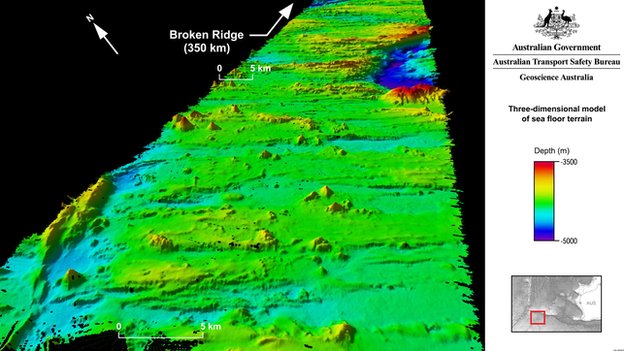 There are also depressions on the seabed, some as deep as 1,400 metres 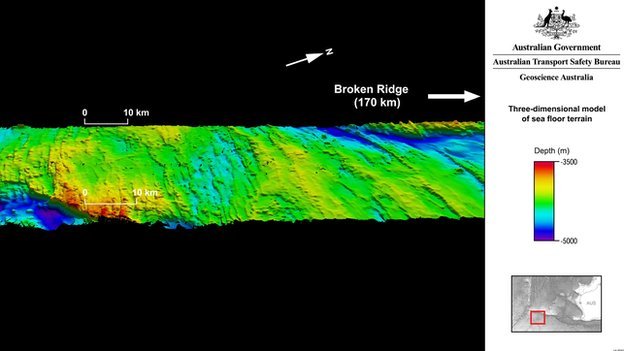 The team at the Australian Transport Safety Bureau (ATSB), which is leading the hunt for the plane, is using sonar to map the new "priority" search area, at the bottom of the Southern Indian Ocean.
After that they will deploy two or three deep-sea vehicles to begin the painstaking, inch-by-inch seabed search for wreckage.
The "priority" area is based on the only piece of hard evidence investigators have, which is a series of brief, electronic "hellos" between the Boeing and a satellite.
It is the equivalent of your mobile phone buzzing next to a loud speaker because it is checking in with a ground station, even when you are not making a call.
But those "hellos" don't give an exact location, just a very rough idea, so the smaller, "priority" area is still 60,000 sq km (23,200 sq miles) - an area roughly the size of Croatia. 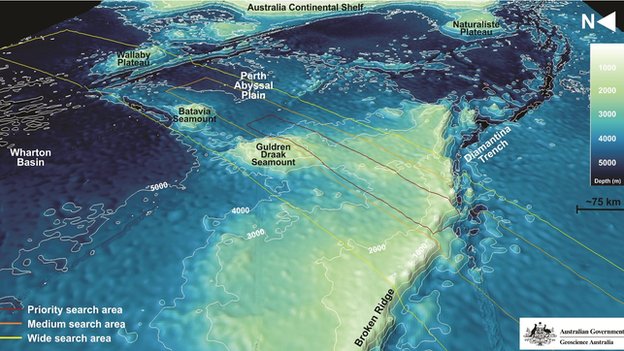 However, the data is not designed to pick up the aircraft, as the resolution is too coarse.
Simon Boxall from the National Oceanography Centre says that despite this, it does provide a detailed look at the seabed.
"Those 'bumps' on the sea floor in the flat, featureless plains to the south of Broken Ridge are each bigger than Ben Nevis.
"Five kilometres (3 miles) across and typically rising 1.5km (0.9 miles) from the sea floor. The terrain of the area around Broken Ridge makes the European Alps look like foothills," he said.
Making sonar maps is vital to ensure the team does not crash its deep-water vehicles into ridges and volcanoes. The equipment is pulled along the sea floor by a 10km armoured cable.
Snagging that cable could damage the kit, or even cut it free, so the maps help them avoid any obstructions.
The deep sea search vehicles have sonar that can pick out odd lumps, cameras that can double check if that lump is wreckage or just a rock and an electronic nose that can smell aviation fuel in the water, even if it is heavily diluted.

The operation to find flight MH370 is the most complex search in history.
They may find clues within months.
Or they may never find the aircraft.