From CSMonitor by Noelle Swan

The search for Malaysia Flight 370 is complicated by the wide spread of ocean garbage, much of which looks just like plane crash debris in satellite images.

It’s a wing.… It’s a seat cushion.… It’s an icebox lid?
The search for missing Malaysia Airlines Flight MH370 has turned up a lot of debris.
Unfortunately, so far at least, none of it appears to belong to the missing Boeing 777.

Vast quantities of trash bobbing around the ocean have made the Sisyphean search for wreckage from Flight 370 all the more complicated.

In the weeks since the March 8 disappearance of the plane, searchers have darted about the Indian Ocean, following evolving analyses of radar data and potential clues offered by satellite imagery.

Unfortunately, garbage floating on the ocean waves looks an awful lot like plane debris, says Malcom Spaulding, a former oceanography professor at the University of Rhode Island who has been involved in search and rescues since the 1970s.
“We essentially have had satellite-based images that give us tantalizing information that there might be a debris field,” says Mr. Spaulding. “But we don’t know whether anything in the debris field is associated with the accident.”

A picture taken off a computer monitor shows a piece of unknown debris floating just under the water that was spotted by a Royal New Zealand P-3 Orion while searching for missing Malaysia Airlines Flight MH370 in the southern Indian Ocean, Monday, March 31, 2014.
The Orion crew could not identify the object and has sent images of it for analysis to the Rescue Coordination Center and Australian Maritime Safety Authority (AMSA).
Rob Griffith, Pool — AP Photo


One of the major problems is that the ocean is littered with similar debris fields that resemble the expected scatter pattern of a crash, says Seattle oceanographer Curtis Ebbsmeyer, who studies sea-bound trash.
“Everything that humanity does is reflected in the debris out there,” Mr. Ebbsmeyer says.
Household garbage, remnants of space shuttle rocket boosters, spilled contents of shipping containers, and lost fishing equipment traverse the globe on the oceans’ currents, he says.

The region’s currents run from the Cape of Good Hope across the Indian Ocean to the Western Australian coast, and north toward India before doubling back to Africa near Ethiopia and returning to the Cape of Good Hope, he says. It takes about three years to complete the circle.
Ebbsmeyer likens the ocean and it’s currents to a mixing bowl filled with cake batter.
“If you just stir slowly, you are going to wind up with patches of powdery stuff,” he explains.
“We’re all used to [electric mixers], but the ocean is basically like your wooden mixing spoon going slowly.”

In this file imagery taken by the Thaichote satellite on March 24, 2014 and released March 27, 2014 by Geo-Informatics and Space Technology Development Agency (GISTDA), a part of about 300 objects floating in the Indian Ocean near the search area for the missing Malaysia Airlines jetliner are shown.
Anticipation has repeatedly turned into frustration in the search for signs of Flight 370 as some of the objects spotted from planes in a new search area west of Australia have turned out to be nothing more than garbage.
(AP Photo/Geo-Informatics and Space Technology Development Agency)

As a result, the ocean accumulates patches of debris.
Some are massive and become islands unto themselves.
“Above each garbage patch, there are winds that circle around and push the debris into the center,” he explains. “It’s the winds that drive the ocean, but they can’t mix it so they basically just collect it.”

The largest of these floating garbage dumps is the Great Pacific Garbage Patch, which is located about halfway between Hawaii and San Francisco.
Scientists have found that birds living on Midway Island in the middle of the Pacific Ocean are eating that garbage.
Scientists discovered a piece of wreckage from a 1944 plane crash in the stomach of an albatross in 2004.

An observer on a Japan Coast Guard Gulfstream aircraft takes photos out of a window while searching for the missing Malaysia Airlines Flight MH370 in Southern Indian Ocean, near Australia,
Tuesday, April 1, 2014.
Bad weather and poor visibility caused the search to be called off early with the coast guard plane only completing one of its three 210 nautical mile legs.
Rob Griffith, Pool — AP Photo

Scientists identified a similar patch in the Southern Indian Ocean in 2010.
There are also hundreds of “little nano garbage patches” floating around the Indian Ocean, Ebbsmeyer says.

Every time satellites find a new debris patch, searchers have to establish “ground truth,” essentially hop in a boat and head to the area to confirm that what the satellite depicted is as it appears.
If they can find it, that is.
Frequently, by the time boats can get to the new area, the objects spotted on the satellite image have floated away or sank.

Last week, a French defense contractor satellite spotted a debris field containing 122 objects, including a 75-foot-long piece of something that commentators surmised could be the wing of a plane.
Searchers systematically trawled the area but turned up nothing.

While large portions of wrecks have been recovered in the past – search teams recovered the tail fin of Air France Flight 447, which crashed into the Atlantic Ocean in 2009 – more often, planes disintegrate into small pieces when they hit the water, says Robert Benzon, a former National Transportation Safety Board investigator who led the 1996 investigation into the crash of TWA flight 800 in the Atlantic Ocean.
“The TWA plane plunged into the ocean from 13,000 feet and the wings shattered. They were in hundreds of pieces,” he says.
“Anything’s possible, but a piece that large would surprise me.”

That leaves the question, What was that 75-foot-long object?
It could be any number of things, Ebbsmeyer says.
“A typical cargo container is 40 feet long and it will float for up to 9 months. It could be a yacht that’s turned over,” he speculates. “Sometimes there are rocket launchers that go into the ocean.”

Assuming the plane did break into small pieces, the debris field is probably spreading wider and thinner with each passing day.
Ebbsmeyer estimates that the debris patch is probably more than 20 miles in diameter and spreading, based on his studies of container spills.
“The debris is going to become less concentrated and harder to spot,” he says.
“There’s no doubt that pieces of plastic from this wreck will float for decades, but they’ll become just part of all the other plastic which is not identifiable.”

Even if search teams are able to recover floating debris, chances are it is not hovering in place directly above the wreckage.
Finding the main debris field and the flight recorder could take additional weeks of searching with automated underwater vehicles (AUV), Spaulding says. 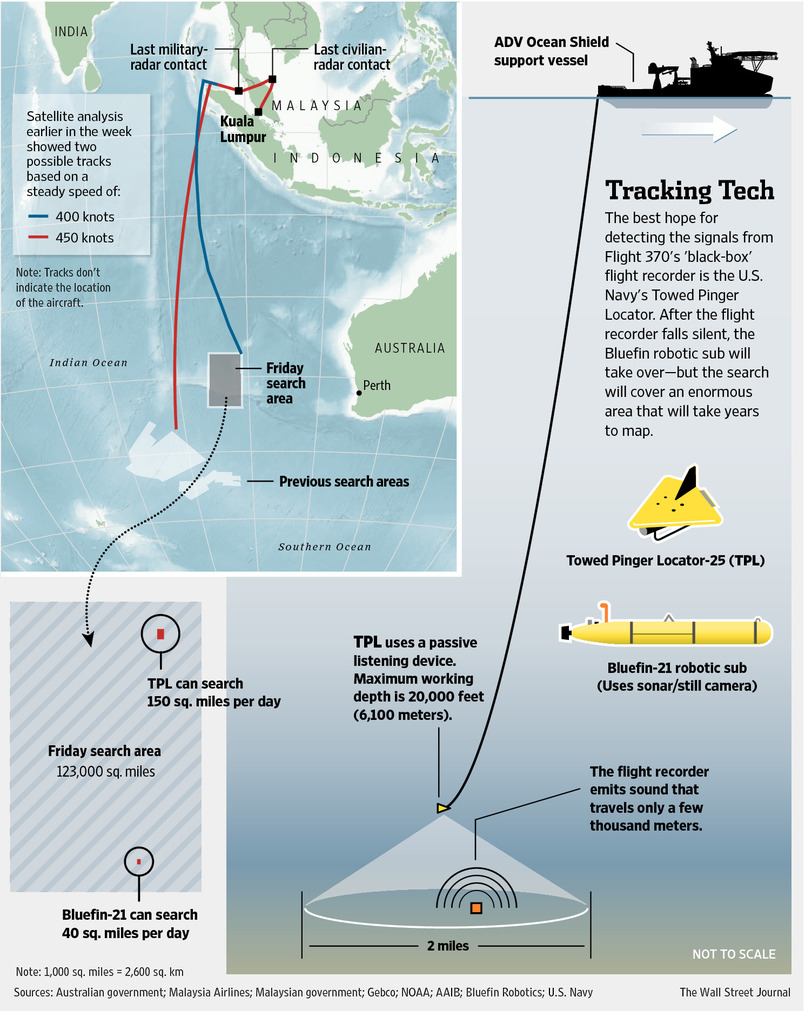 The US Navy’s Bluefin-21 AUV can help provide searchers a view of the sea floor using side scan sonar technology.
However, the ocean floor can be just as littered with debris as the sea surface, NTSB’s Mr. Benzon says.
When searching for TWA Flight 800, “we found a lot of stuff on the bottom of the ocean here that had nothing to do with the accident, including wrecks from other crashes,” he says.
“The bottom of the ocean a lot of times isn’t as clean as everybody thinks it is. Even when they get down there, they may have their work cut out for them.”