Greenwich Mean Time. A time of change: A change in time.

From The Guardian by Rebekah Higgitt

As the clocks change from GMT to British Summer Time, Rebekah Higgitt looks at the history of Britain’s standard time
Rebekah Higgitt is one of the curators of Ships, Clocks and Stars: the Quest for Longitude (11 July 2014-4 January 2015), a forthcoming exhibition at the National Maritime Museum marking the tercentenary of the first Longitude Act, and which includes the story of the Nautical Almanac and the development of marine timekeepers.


It has become something of a tradition on this blog to mark the biannual change of the clocks and, although I no longer work at the Royal Observatory Greenwich, it’s a habit that sticks.
This time, as we say farewell to it until the autumn, it seems a good opportunity to reminisce about Greenwich Mean Time.*
* Our standard time is now in fact Coordinated Universal Time (UTC), derived from International Atomic Time but as close as darn it to GMT.

Why Greenwich time? And what’s mean about it?

Mean time is clock time.
It is a regularised, idealised version of solar time that is tracked not by the apparent motions of the Sun, observed by shadows on sundials, but by a mechanical device that splits the solar day into equal parts.
Mean time ticks away at the same pace no matter the season.
The difference between the two is described by the equation of time.

Establishing the relationship between mean solar time and apparent solar time only really became possible, or useful, with the arrival of the pendulum clock in the 1650s.
This made the mechanical clock, for the first time, a scientific instrument.
Christiaan Huygens, who developed the first prototype pendulum clock in 1656, was able to produce reasonably accurate tables of the equation of time in 1665.

However, it fell to John Flamsteed to publish tables in 1672-3 that tackled the problem in what became the standard way.
He provided the formula by which apparent solar time could be converted into Mean Time.

Just a couple of years later, Flamsteed was appointed the first Astronomer Royal and moved into the newly built observatory in Greenwich.
There, he and his patrons had installed state-of-the-art pendulum clocks by the best clockmaker available, Thomas Tompion.
With observations of the Sun and the help of his tables, Flamsteed set these clocks to the local time: Greenwich Mean Time.
Greenwich time became important because there were people measuring it and because other people made use of astronomical observations based on it.
Flamsteed’s catalogue of stars, which was to become a standard reference work for the following decades, listed their positions based on Greenwich time. 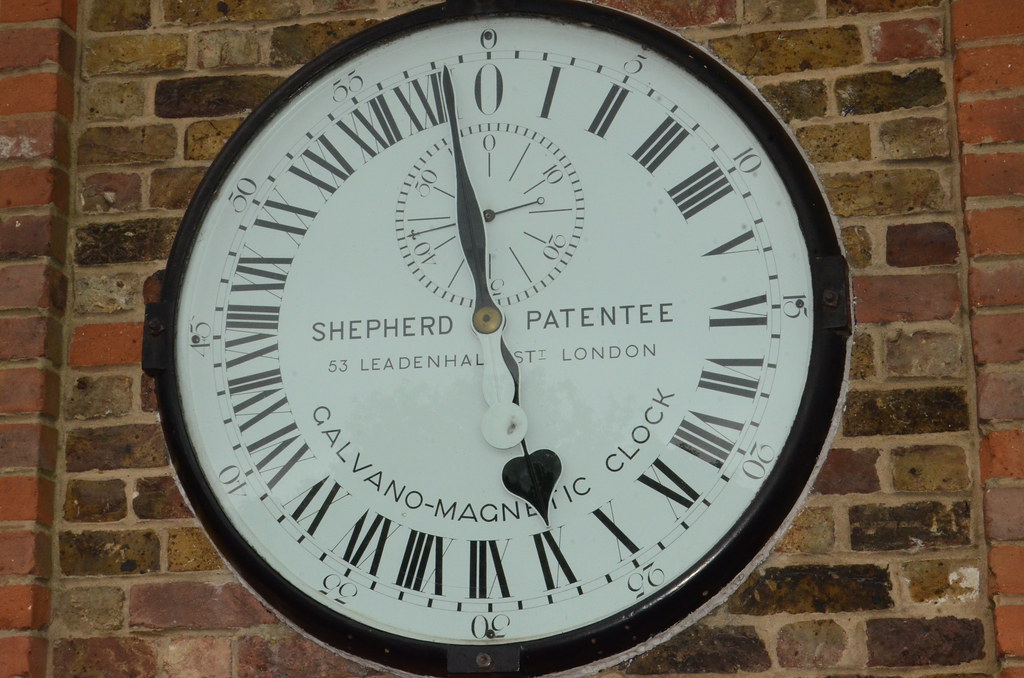 It was one of Flamsteed’s successors, Nevil Maskelyne, Astronomer Royal from 1765 to 1811, who did most to ensure that GMT mattered to more than just astronomers.
Under his initiative, observations made at Greenwich were processed into tables that could be used by navigators and cartographers to establish positions at sea or on land.
This was the Nautical Almanac, first published for the year 1767.

Surveyors of the Royal Navy and the Ordnance Survey relied on data that was based on observations made at Greenwich, meaning that their charts and maps used Greenwich as a reference point.
More precisely, this was the meridian (north-south line) on which the chief telescope at Greenwich was mounted.
The Greenwich meridian thus became a prime meridian for British mapping, and east-west position was measured from there.
To establish longitudes it was necessary to know the difference between local time and GMT.
This could be worked out with astronomical observations and the tables of the Nautical Almanac and, increasingly, with chronometers set to GMT.

The move of GMT from the specialist worlds of astronomy, navigation and surveying into civilian life was down to the increasing role of technologies and cultures that demanded standardization.
The arrival of railways made timetabling a necessity.
Telegraph systems made it both desirable and possible to know what time it was elsewhere.
Factory work made production and payment dependent on timekeeping.

GMT became “Railway Time” in the 1840s, and Britain’s legal standard time in 1880. Despite what you’ll often read, it did not become an international standard in 1884.
In that year an international conference did recommend the adoption of the Greenwich meridian as the world’s reference point for time and longitude, but it was just a recommendation.

What actually happened as a result of the International Meridian Conference, and what did not, is a story for another post.
See you back here on 26 October.