How scientists are cleaning up rivers using grasses and oysters 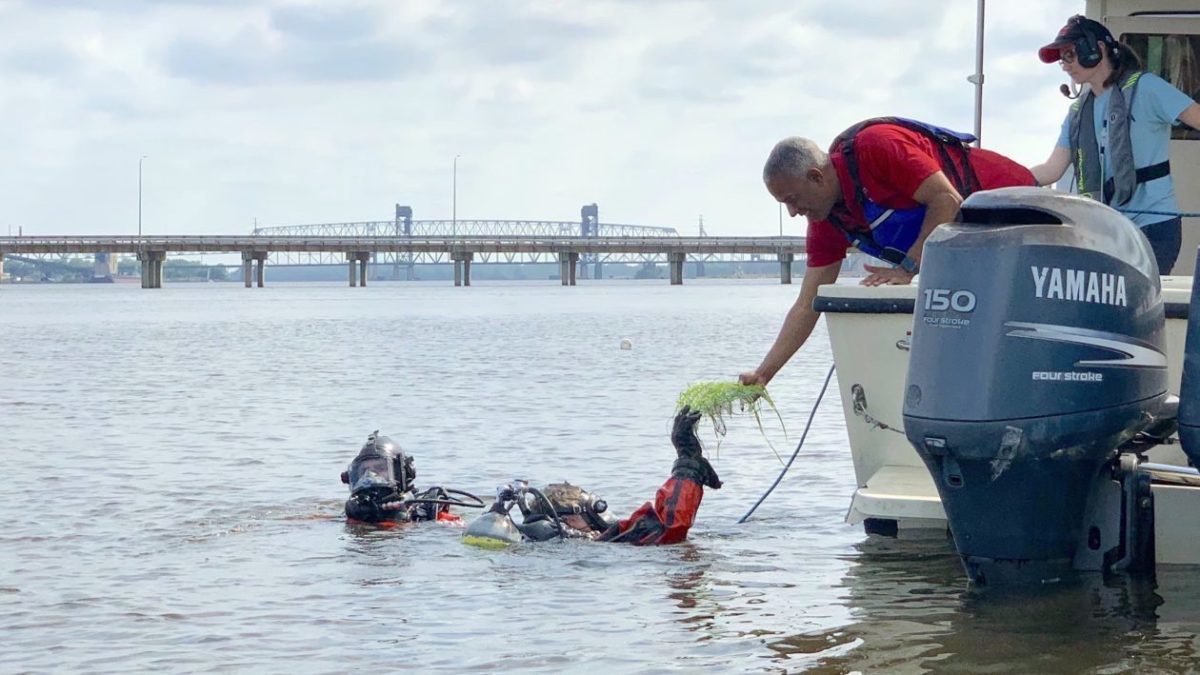 Camden Mayor Vic Carstarphen hands a flat of wild celery to an EPA diver for transplant.
Katerine Rapin
From e360 by Katerine Rapin

In the Delaware River and other waterways across the US, conservationists are restoring aquatic vegetation and beds of bivalves to fight pollution.

This story originally appeared on Yale Environment 360 and is part of the Climate Desk collaboration.

On a recent summer morning near Camden, New Jersey, two divers from the US Environmental Protection Agency hovered over a patch of sediment 10 feet below the surface of the Delaware River.
With less than two feet of visibility in the churning estuary, they were transplanting a species crucial to the ecosystem: Vallisneria americana, or wild celery grass.
One diver held a GoPro camera and a flashlight, capturing a shaky clip of the thin, ribbon-like blades bending with the current.

Watching the divers’ bubbles surface from the EPA’s boat was Anthony Lara, experiential programs supervisor at the Center for Aquatic Sciences at Adventure Aquarium in Camden, who had nurtured these plants for months in tanks, from winter buds to mature grasses some 24 inches long.

“It’s a little nerve-racking,” he said of releasing the grasses into the wild, where they could get nudged out by a competing plant or eaten by a duck.
“But that’s life.”

This was the first planting of a new restoration project led by Upstream Alliance, a nonprofit focused on public access, clean water, and coastal resilience in the Delaware, Hudson, and Chesapeake watersheds.
In collaboration with the Center for Aquatic Sciences, and with support from the EPA’s Mid-Atlantic team and the National Fish and Wildlife Foundation, the alliance is working to repopulate areas of the estuary with wild celery grass, a plant vital to freshwater ecosystems.
It’s among the new, natural restoration projects focused on bolstering plants and wildlife to improve water quality in the Delaware River, which provides drinking water for some 15 million people.

Such initiatives are taking place across the United States, where, 50 years after passage of the Clean Water Act, urban waterways are continuing their comeback, showing increasing signs of life.
And yet ecosystems still struggle, and waters are often inaccessible to the communities that live around them.
Increasingly, scientists, nonprofits, academic institutions, and state agencies are focusing on organisms like bivalves (such as oysters and mussels) and aquatic plants to help nature restore fragile ecosystems, improve water quality, and increase resilience.

Bivalves and aquatic vegetation improve water clarity by grounding suspended particles, allowing more light to penetrate deeper.
They also have exceptional capacity to cycle nutrients—both by absorbing them as food and by making them more available to other organisms.
Thriving underwater plant meadows act as carbon sinks and provide food and habitat for scores of small fish, crabs, and other bottom-dwellers.
Healthy bivalve beds create structure that acts as a foundation for benthic habitat and holds sediment in place.

“Why not take the functional advantage of plants and animals that are naturally resilient and rebuild them?” says Danielle Kreeger, science director at the Partnership for the Delaware Estuary, which is spearheading a freshwater mussel hatchery in southwest Philadelphia.
“Then you get erosion control, water quality benefits, fish and wildlife habitat, as well as better access for people.” 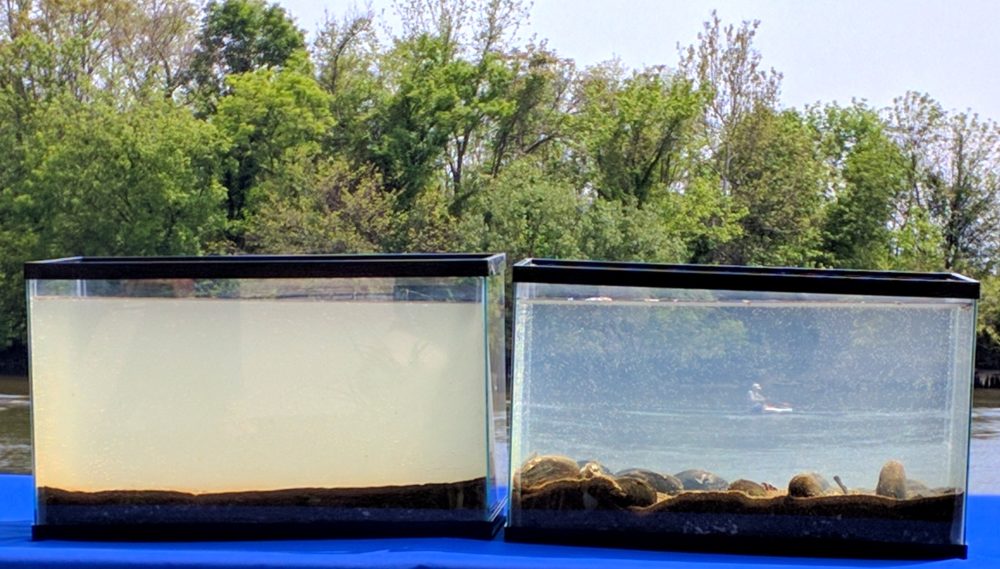 Murky river water is filtered by mussels in the tank on the right.
PARTNERSHIP FOR THE DELAWARE ESTUARY
One hundred miles north of Philadelphia, the Billion Oyster Project has been restoring the bivalves in New York Harbor since 2010, engaging more than 10,000 volunteers and 6,000 students in the project.
Oyster nurseries are being installed in Belfast Lough in Northern Ireland, where until recently they were believed to have been extinct for a century.
And a hatchery 30 miles west of Chicago has dispersed 25,000 mussels into area waterways, boosting the populations of common freshwater mussel species.

Underwater vegetation restoration projects have been underway in the Chesapeake Bay and Tampa Bay for years, and more recently in California where seagrass species are in sharp decline.
(Morro Bay, for example, has lost more than 90 percent of its eelgrass beds in the last 15 years.) The California Ocean Protection Council’s 2020 Strategic Plan to Protect California’s Coast and Ocean aims to preserve the mere 15,000 acres of known seagrass beds and cultivate 1,000 more acres by 2025.

Scientists stress that these projects must be implemented alongside strategies to continue curbing contaminants, mainly excess nutrients from sewage and fertilizers, flowing into our waterways—still the most critical step in improving water quality.
After several decades of aquatic vegetation plantings in the Chesapeake Bay, for example, scientists say that the modest increase of plants is largely due to nature restoring itself following a reduction in nutrient pollution.

And any human intervention in a complex ecosystem raises a host of compelling concerns, such as how to ensure sufficient genetic diversity and monitor competition for food and resources.
Scientists say that, in many cases, they’re learning as they go.

Still, in areas where the natural environment is improving, bringing back bivalves and aquatic plants can create a lasting foundation for entire ecosystems.
And restoration initiatives are an active form of stewardship that connects people to their waterways, helping them understand the ecosystems we depend on for our survival.

Until five years ago, the extent of wild celery grass beds in the Delaware estuary was a bit of a mystery.
Many scientists didn’t think the water quality was suitable, and since the estuary contains a lot of sediment and roils with the tides, the plants weren’t visible in aerial imagery.

But in 2017, EPA researchers started surveying by boat to detect submerged vegetation and were surprised to find the plant thriving in parts of a 27-mile stretch of the Delaware River from Palmyra, New Jersey, past Camden and Philadelphia, to Chester, Pennsylvania.
That’s the only section of the river designated by the Delaware River Basin Commission as unsafe for “primary contact recreation”—activities like jet skiing, kayaking, and swimming. 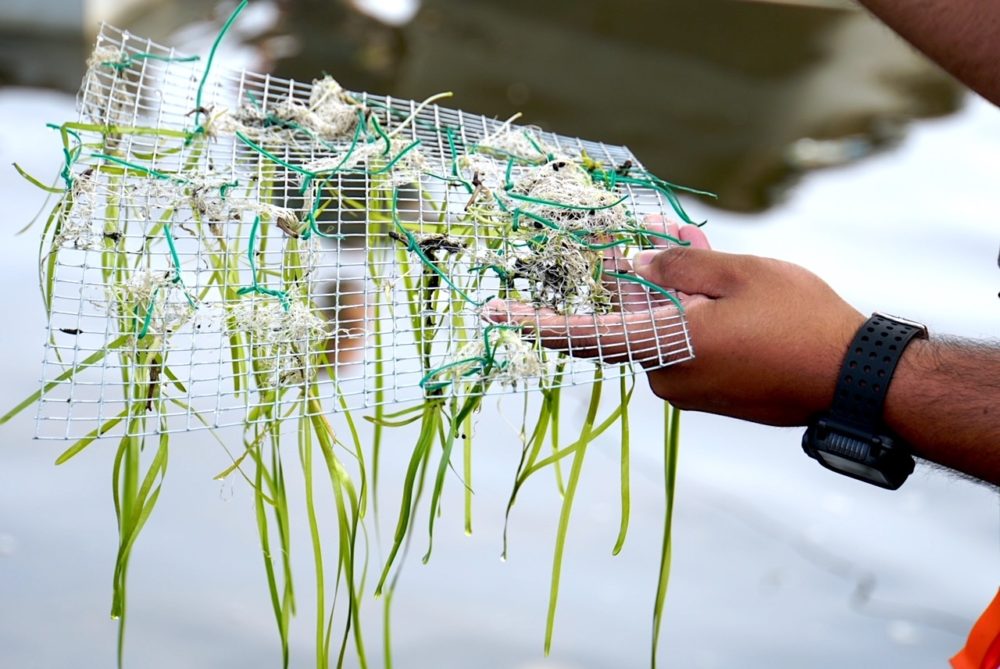 Celery grass that will be transplanted to the Delaware River.
OLIVIA LIU / UPSTREAM ALLIANCE
The discovery of healthy grass beds was exciting, says the EPA Mid-Atlantic region’s senior watershed coordinator Kelly Somers, because the plant is an indicator of water quality.
The EPA’s research, accessible via online maps, has been especially helpful for the Upstream Alliance’s restoration work, says founder and president Don Baugh, because most of the research on wild celery grass is from other places—primarily the Chesapeake Bay.
The restoration of wild celery and other aquatic plant species has been underway there for more than 30 years.

Among the Chesapeake’s experts is Mike Naylor, aquatic biologist for the Maryland Department of Natural Resources, who, back in the 1990s, was pulling National Archives images of the Chesapeake Bay to find out what bay grass beds looked like in the 1930s and ’50s.
When combined with similar research by the Virginia Institute of Marine Science, he found that at least 200,000 acres of underwater vegetation flourished in the bay in those decades, dropping to about 38,000 by 1984.

When I talked to Naylor in mid-July, he had just been out with volunteers from the ShoreRivers group harvesting redhead grass (Potamogeton perfoliatus)—enough to fill the back bed of a pickup truck, which will yield a couple gallons of seeds for replanting, he says.

In recent years, scientists on the Chesapeake Bay have switched from transplanting adult plants to direct seeding, which is far less resource-intensive and laborious.
“You can spread tens of acres of seeds in one day with just three people,” Naylor says.

More efficient techniques combined with site selection informed by accumulated data on plants’ requirements could significantly boost the success of restoration efforts.
Still, scientists agree that the modest increases in seagrass growth over the last 30 years are mainly due to natural repopulation following improvements in water quality.

“In the Chesapeake Bay, the thing that has led to wide-scale [aquatic vegetation] recoveries is nutrient load reductions,” says Cassie Gurbisz, assistant professor in the environmental studies program at St.
Mary’s College in Maryland.

Excess nutrients—mainly nitrogen and phosphorus from sewage and agricultural runoff—are among the biggest detriments to water quality.
And it’s a problem that bivalves can help address.
The Billion Oyster Project, which has restored oysters at 15 reef sites, is working to determine how oysters affect—and are affected by—water quality.
The project’s goal is to restore 1 billion oysters to New York Harbor by 2035. 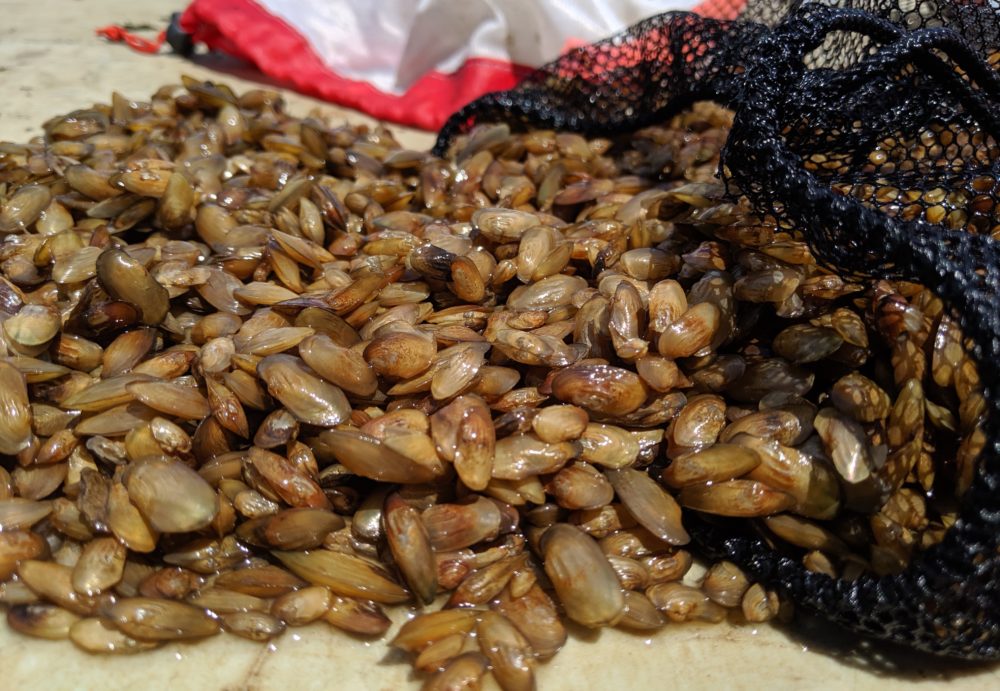 Juvenile alewife floater mussels cultivated in a hatchery.PARTNERSHIP FOR THE DELAWARE ESTUARY
A 2017 pilot project in the Bronx River Estuary studied the cleaning capabilities of the marine ribbed mussel.
Researchers estimated that 337,000 adult ribbed mussels floating in the estuary could sequester 138 pounds of nitrogen in their tissues and shells in six months.
As it eats, a single mussel can filter up to 20 gallons per day, remove excess nitrogen both by assimilating it into their shells and tissues and burying it in the sediment as waste.
Because they’re especially sensitive to poor water quality, freshwater mussel species are among the most endangered groups of animals.

“In some watersheds, the reasons why they went away are still there, and so they’re not really yet restorable,” says Kreeger of the Partnership for the Delaware Estuary, which has been researching freshwater mussels in the region for 15 years.
The reasons include habitat destruction caused by dredging or filling, sedimentation or siltation from runoff, and climate change factors like warming water and increased stormwater runoff.

“In many areas, water quality has come back enough and habitat is stable enough that you can rebuild,” says Kreeger.
The partnership’s proposed hatchery and education center would have the capacity to propagate 500,000 native mussels each year.

Kreeger says the hatchery team is working on biosecurity and genetics preservation plans to address the concern that releasing large numbers of hatchery-raised mussels could dilute genetic diversity and introduce diseases in the wild.

“Propagation or restoration projects should maintain the current genetic makeup and diversity and should not disrupt the natural and evolutionary processes,” says Kentaro Inoue, research biologist at the Daniel P. Haerther Center for Conservation and Research at Shedd Aquarium in Chicago.
He’s working with the Urban Stream Research Center’s hatchery—which has released about 25,000 mussels into Chicago-area waterways—to analyze DNA samples from restoration sites.

The key issue is that many propagated animals have exactly the same maternal genetics.
(The first 24,000 juveniles released by the hatchery were the progeny of just four mother mussels.)
The center is working to mitigate some of these concerns by tagging their mussels so as not to propagate animals with the same genetics in a subsequent season.
Even still, “We need to conduct more post-release monitoring after releasing hatchery-reared juveniles into the wild,” says Inoue.