A deep dive into risks for undersea cables, pipes 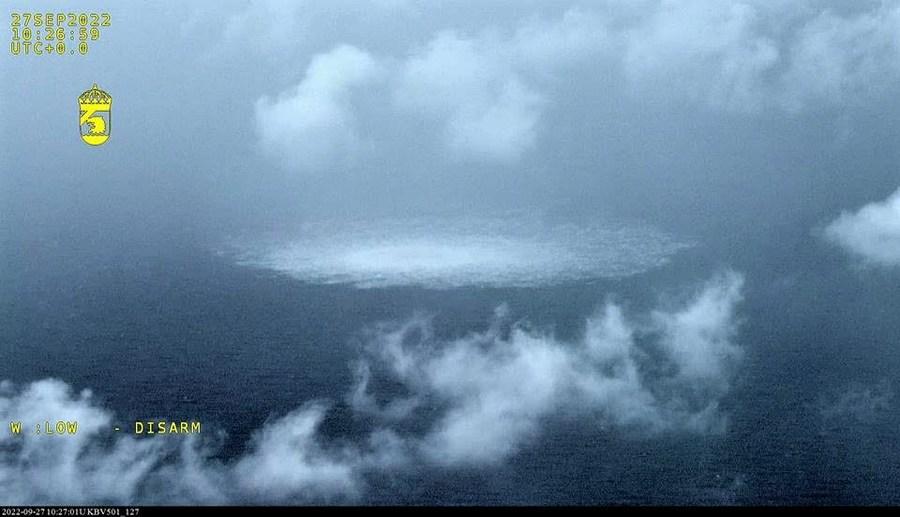 A large disturbance in the sea can be observed off the coast of the Danish island of Bornholm Tuesday, Sept. 27, 2022 following a series of unusual leaks on two natural gas pipelines running from Russia under the Baltic Sea to Germany have triggered concerns about possible sabotage.
The suspected sabotage this week of two gas pipelines that tied Russia and Europe together is driving home how vital yet weakly protected undersea infrastructure is vulnerable to attack, with potentially catastrophic repercussions for the global economy.
(Danish Defence Command via AP, File) (Uncredited/Armed Forces of Denmark)
From The Washington Post by John Leicester


Deep under water, the pipes and cables that carry the modern world’s lifeblood — energy and information — are out of sight and largely out of mind.
Until, that is, something goes catastrophically

The suspected sabotage this week of gas pipelines that tied Russia and Europe together is driving home how vital yet weakly protected undersea infrastructure is vulnerable to attack, with potentially disastrous repercussions for the global economy.

It isn’t known who detonated explosions, powerful enough to be detected by earthquake monitors across the Baltic Sea, that European governments suspect were the cause of multiple punctures in the Nord Stream pipelines.
The leaks released frothing torrents of methane, a potent greenhouse gas. 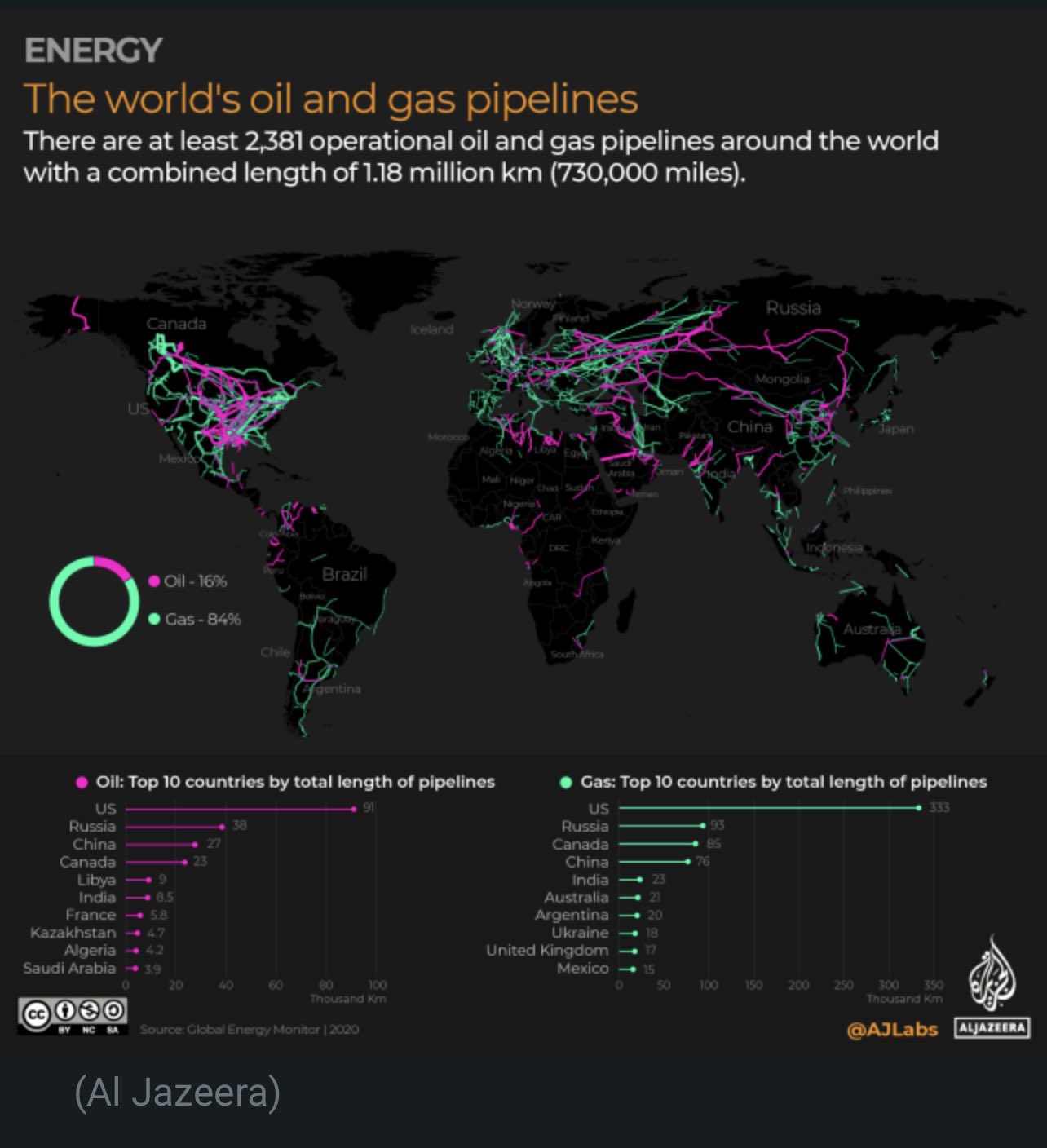 The Kremlin has denied involvement, calling suspicions that it sabotaged the pipelines “predictable and stupid.”

Analysts found that hard to believe, saying that gas-producer Russia seemingly had most to gain from driving up market prices with such a strike and to punish Europe, by creating fear and uncertainty, in retaliation for its switching to other gas suppliers because of the Kremlin's invasion of Ukraine.

Because underwater sabotage is harder to detect and easier to deny than more readily visible attacks on the ground and in the air, the blasts also seemed to fit Russia’s military playbook for “hybrid war.” That’s the use of an array of means — military, nonmilitary and subterfuge — to destabilize, divide and pressure adversaries. 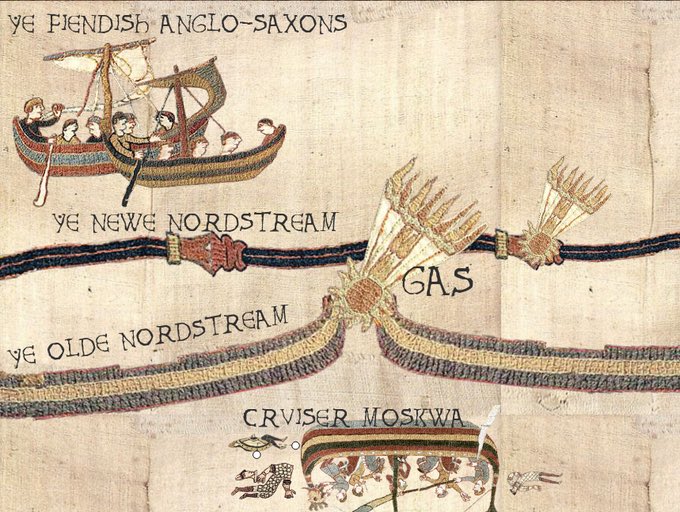 More than 1.3 million kilometers (807,800 miles) of fiber optic cables — more than enough to stretch to the moon and back — span the oceans and seas, according to TeleGeography, which tracks and maps the vital communication networks. 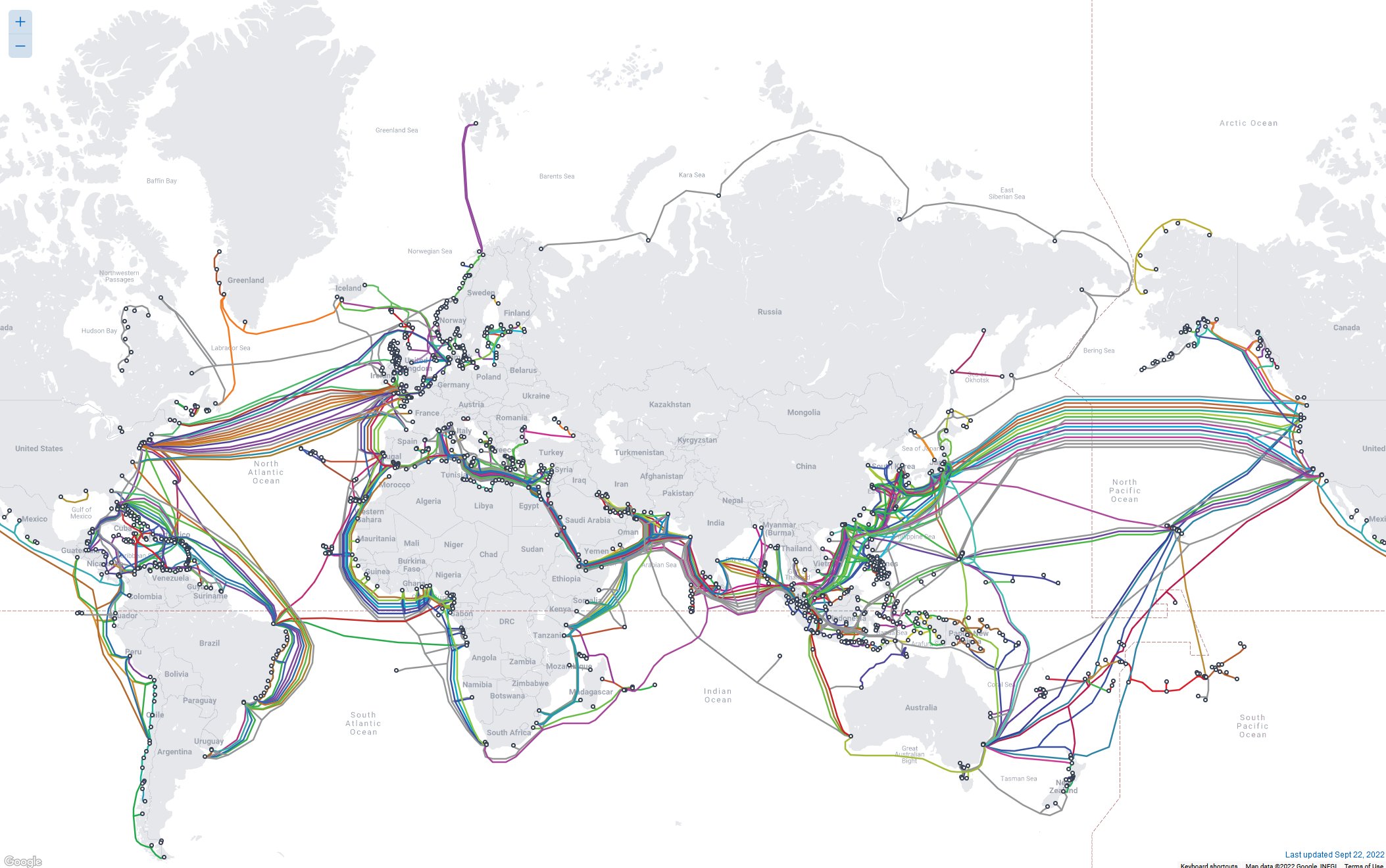 The cables are typically the width of a garden hose.
But 97% of the world’s communications, including trillions of dollars of financial transactions, pass through them each day.

Without them, modern life could suddenly freeze, economies would crash and governments would struggle to communicate with each other and their troops, British lawmaker Rishi Sunak warned in a 2017 report, laying out the risks before he became the U.K.’s Treasury chief.

Power cables also run underwater.
Lithuania alleged in 2015 that a Russian naval ship repeatedly tried to hinder the laying of an undersea power cable linking the country to Sweden. Lithuania’s energy minister was quoted as saying he regarded Russia’s actions as “hostile.”

HOW VULNERABLE ARE THEY?

The gas pipeline blasts showed that striking seabed infrastructure and escaping seemingly undetected is possible, even in the crowded Baltic Sea.
Relatively shallow, with lots of maritime traffic and unexploded bombs on its floor from both world wars, the sea is viewed as a challenge to navigate undetected.

Even the Kremlin agreed it seemed unlikely to be the work of amateurs.
“It looks like a terror attack, probably conducted on a state level,” Kremlin spokesman Dmitry Peskov said Thursday.

Dozens of breakages each year to submarine communication cables, often caused by fishing vessels and anchors, testify to their fragility
Their locations on the seafloor aren’t secret, they’re not robustly protected by international law and it doesn’t take vast expertise or resources to damage them, Sunak’s report said.

“Our infrastructure is fragile,” said Torben Ørting Jørgensen, a retired admiral with the Danish navy. The Baltic gas leaks “have sharpened our attention on these vulnerabilities being the internet, power cables or gas pipes,” he said.

Internet giants such as Amazon, Facebook parent Meta, Google and Microsoft have been among those driving the spreading web of cabling, with ownership stakes in a growing number of subsea cables.
That avoids the need to spend taxpayer dollars on laying the networks.

But because private firms don’t think about national security as broadly as governments do, they have not been alert to the “aggressive new threat” to cables from places like Russia, Sunak’s report said.

Industry voices are now calling for more to be done.

“Given the critical importance of undersea cables to global communications, as well as their vast economic and social impact, protection of these vital assets should be an imperative,” said Chris Carobene, vice president at undersea cable-laying company SubCom.

He called for governments and “key stakeholders” to work together to “ensure that protection is a priority for new and existing systems” and to draw up a clear set of “risk mitigation processes around cable systems.”
Submarine cable installations in the telecom, power and seismic industries have similarities and differences.
But there is a common thread in every submarine cable lay: you need accurate real-time control over the position and bottom tension of your cable as it lands on the seabed.
This video discusses a proven method for achieving this control being used by over 75% of the telecom cable ships in the world.
WHAT CAN BE DONE?

After the Cold War, nations in the NATO military alliance shrank their anti-submarine warfare forces, trimming defense budgets and judging the threat from Russia diminished.

“The ability of many Western nations to reliably detect, track, deter, and counter Russian undersea activities has atrophied,” said a 2016 study, “Undersea Warfare in Northern Europe,” that was led by Kathleen Hicks, now No. 2 in the U.S. Defense Department.

Retired French Vice Adm. Michel Olhagaray, a former head of France’s center for higher military studies, said Western nations “allowed themselves to fall asleep” and that they must now throw themselves into better protecting undersea cables and pipes that Russia has identified as both vital and vulnerable.

They “certainly have fallen behind,” Olhagaray said of Western defenses against undersea attack.

“The ocean floors are a far more important and obvious domain” than exploring space, he added. “Rather than going to Mars, we should be better protecting the infrastructure.”