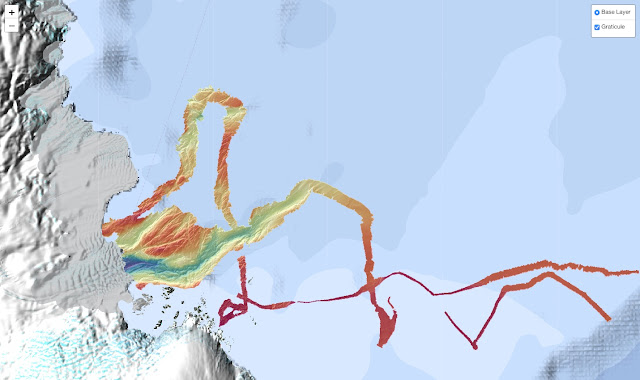 The 2300 metre-deep, 2000 metre-wide and at least 55 kilometre-long valley, extending from underneath the Vanderford Glacier into the ocean, was mapped using Nuyina’s multibeam echosounder, which uses sound to build a visual picture of the sea floor. 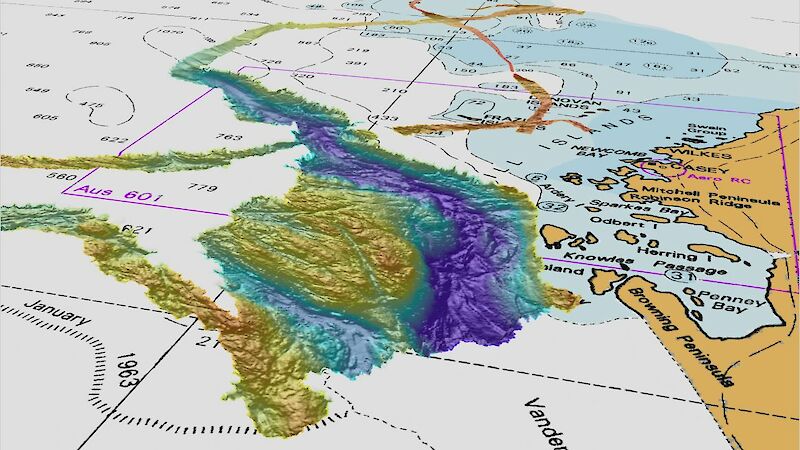 A false-colour image of the valley mapped using RSV Nuyina’s multibeam echosounder, extending from beneath the Vanderford Glacier into the open ocean.
The purple colour represents the deepest point mapped, which reaches to 2300 m.
False colour
image: Geoscience Australia.
Chart: Hydrographic Material reproduced with permission of The Australian Hydrographic Office © Commonwealth of Australia 2022 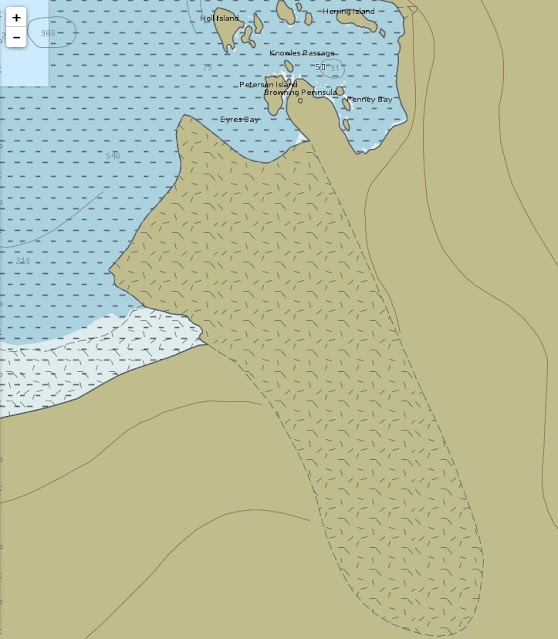 Australian Antarctic Data Centre Manager, Dr Johnathan Kool, said the raw ‘bathymetry’ (seabed depth) data from the valley and other features mapped during Nuyina’s voyage, has been cleaned and processed and can now be used for research.
“Through AusSeabed, the Australian Antarctic Division and other partners are contributing jigsaw pieces to fill in the Australian seabed puzzle, which researchers and policy-makers can then use to meet their needs,” Dr Kool said.
“For example, our Southern Ocean and Antarctic seabed bathymetry provides information about habitat that can be used in managing Southern Ocean fisheries, or in research planning – such as where to deploy seabed instruments to study krill.”

Dr Kool said that when the multibeam echosounder sends pings of sound towards the seabed, some of the soundings reflect off ice and organisms in the water, or penetrate down in to the seabed.
The roll and heave of the ship also sends depth soundings off in different directions.
“Rather than a perfect line of data, you end up with a cloud of dots, and experts, sometimes referred to as ‘dot zappers’, have to manually remove the dots that shouldn’t be there,” he said.
Geoscience Australia’s Director of National Seabed Mapping, Dr Scott Nichol, said the AusSeabed team was now working towards automating this process to provide a standardised product.
“We are really pleased to have been working alongside the Australian Antarctic Division to deliver the first seabed map from RSV Nuyina,” Dr Nichol said.
“It really is a stunning dataset that I know will be widely used by the science community.”
Users can access the processed data through the Australian Antarctic Data Centre’s web service, which allows them to obtain the information they need without having to download large datasets.
Detailed discoveries
The Vanderford Glacier’s valley is the first of many exciting new discoveries anticipated, as RSV Nuyina collects seabed soundings during transits between Australia and Antarctica and on dedicated marine science voyages.

While there have been hints of what lies beneath in previous surveys near the glacier and elsewhere, RSV Nuyina brings a level of detail to seabed mapping that was not previously available.
“Nuyina’s high definition mapping capability brings certainty to our data – it is going to turn what we think is down there into what we know,” Dr Kool said.

Data from AusSeabed also feeds in to global seabed mapping initiatives, such as the Nippon-Foundation-GEBCO Seabed 2030 project, which aims to develop a definitive map of the world’s ocean floor by 2030