Climate change: Can an enormous seaweed farm help curb it? 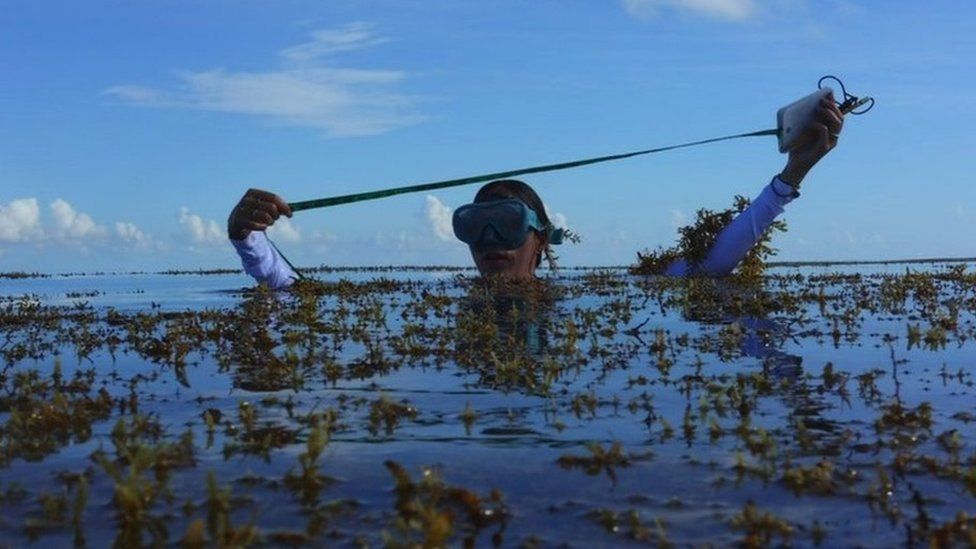 Imagine a huge seaweed farm the size of Croatia floating in the South Atlantic between Africa and South America.

Spinning in a natural ocean eddy, it sucks a billion tonnes of carbon out of the atmosphere every year and sinks it to the ocean floor out of harm's way.

Far-fetched? Maybe.
But a British businessman plans to have this up and running by 2026.

Scientists say reducing the world's emissions probably won't be enough and that carbon capture will be crucial to limiting global warming.
But carbon capture schemes have so far been relatively low-scale and seen limited success.

If they are going to work, they need to be bold, big, and attractive to investors.

Businessman John Auckland believes he has just such an idea.
He wants to exploit what he calls "the wondrous properties" of the floating seaweed sargassum.
He's confident his Seafields floating farm will draw sufficient CO2 from the air to moderate the effects of climate change, while also earning its backers carbon credits.

At 55,000 sq km (21,200 sq miles) Auckland is thinking big.
It needs to be vast to put a dent in the fifty gigatonnes of carbon dioxide we pump into the atmosphere every year.
A gigatonne is a billion tonnes: the amount of carbon Auckland's mega-farm aims to capture annually. 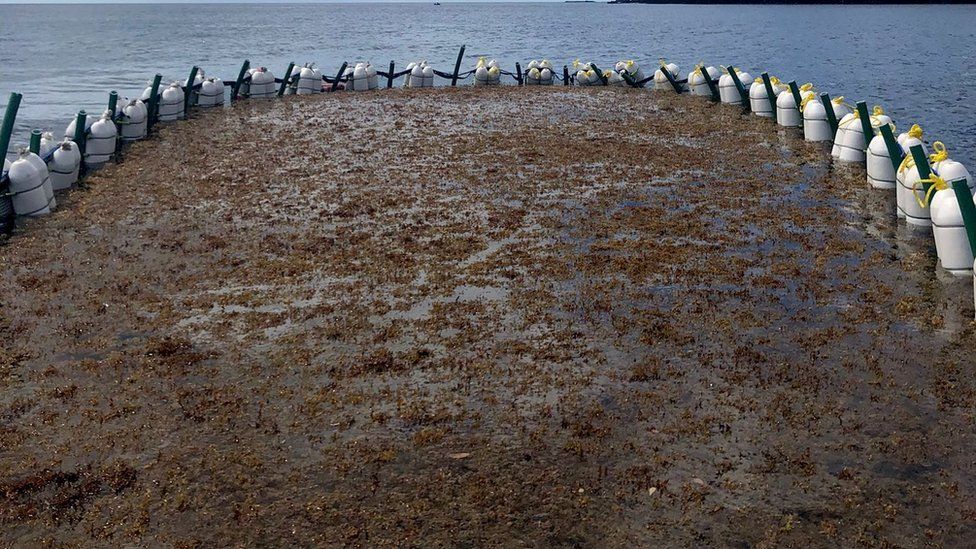 Testing whether sargassum seaweed can be contained in the open ocean
The project is currently road-testing its technology in the Caribbean and Mexico, and is inspired by the ideas of Prof Victor Smetacek, a marine biologist.
Described by Seafields as their Scientific Founder, he has long been fascinated by the potential to grow seaweed in enormous rotating ocean currents known as gyres.
"They collect all kinds of stuff in the middle," he says.
"The best known examples, of course, are the plastic garbage that is accumulating in the middle of the subtropical gyres."

In the same way these giant eddies trap islands of floating plastics, Seafields plans to hem in its crop of sargassum.
"The gyre just stops the sargassum from escaping," explains John Auckland.
"As long as we create the right conditions for it, it will only grow there.
If any escapes from our farm, it will just die off or just fail to continue growing." 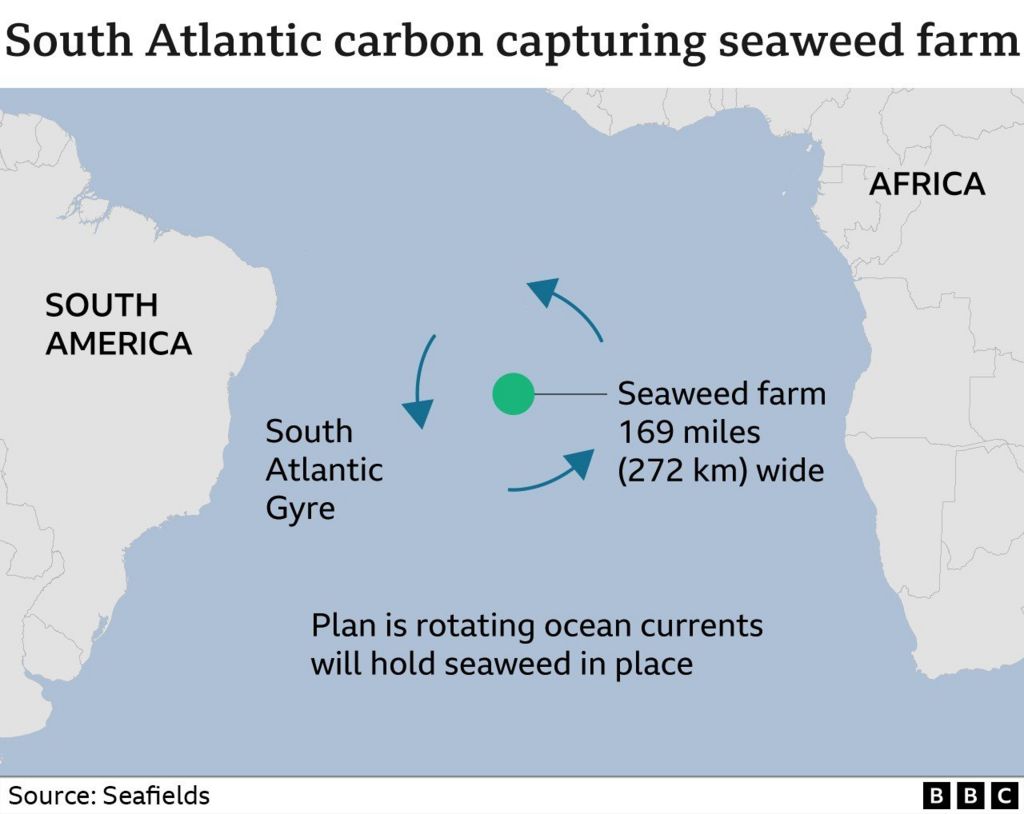 He had better be right.
Sargassum has plagued the Caribbean's tourism industry for decades.
When it washes up on the coast, its rot gives off a foul stench.
Not the best setting for relaxing on a beach towel.

But Seafields is confident this will not happen with their seaweed.
It says any that escapes from the farm should be starved the nutrients the team plans to syphon up from the ocean depths to feed their crop.

Because of evaporation from the subtropical sun beating down on it all day, the surface water trapped in gyres is very salty and low in nutrients.
It is why Prof Smetacek calls gyres "the oceans' deserts".

Yet, as these deserts slowly turn, they glide over a colder, nutrient rich ocean layer that the professor wants to draw to the surface to sustain the sargassum.

"If you were to connect the nutrient rich, deep water with pipes," explains Prof Smetacek, "bring that water up from the bottom and let it warm up, then it will flow up by itself and continue flowing forever." 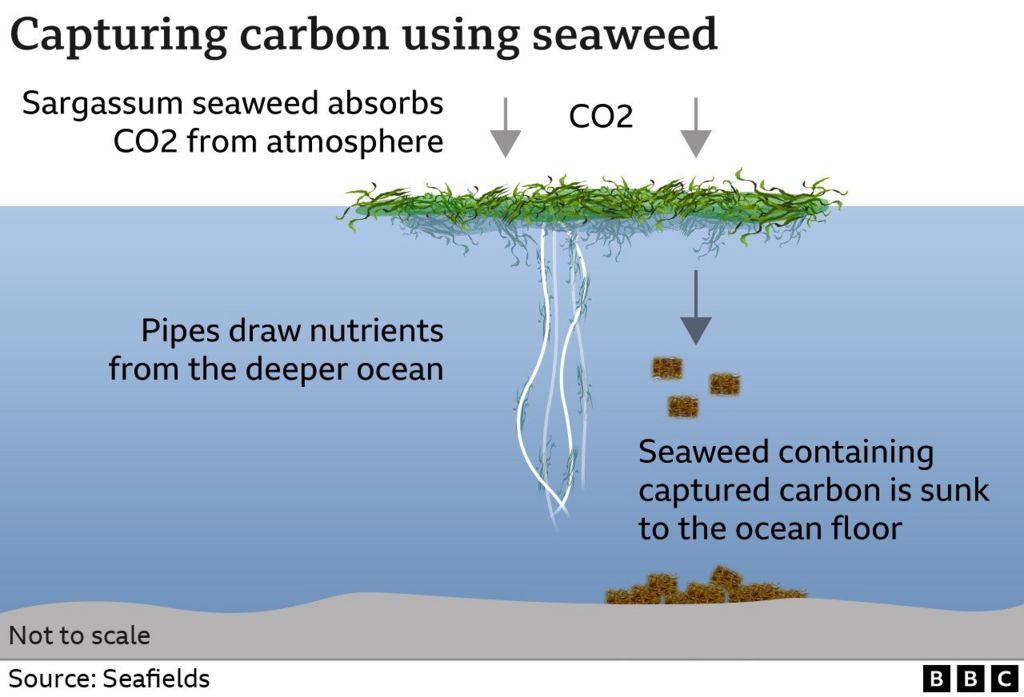 The team is testing their technology in early 2023.
It will be a nail-biter.
While first theorised back in 1956, the salt fountain has successfully been recreated, but nowhere near the enormous scale Seafields plans.

If the salt fountain does work to scale, Prof Smetacek predicts a bumper crop of sargassum.
"They have enormous growth rates.
They double their biomass every 10 days," he says.
"The good thing about seaweed is that you can harvest it with a combine harvester."

Prof Smetacek envisages floating harvesters will bale the crop up and then send it down to the inert depths of the sea floor, where there is so little oxygen the bales will not rot.
The carbon they contain will remain fixed in the seaweed's structure.
Tests are ongoing, but the team envisages they can sequester captured carbon for hundreds, perhaps thousands of years. 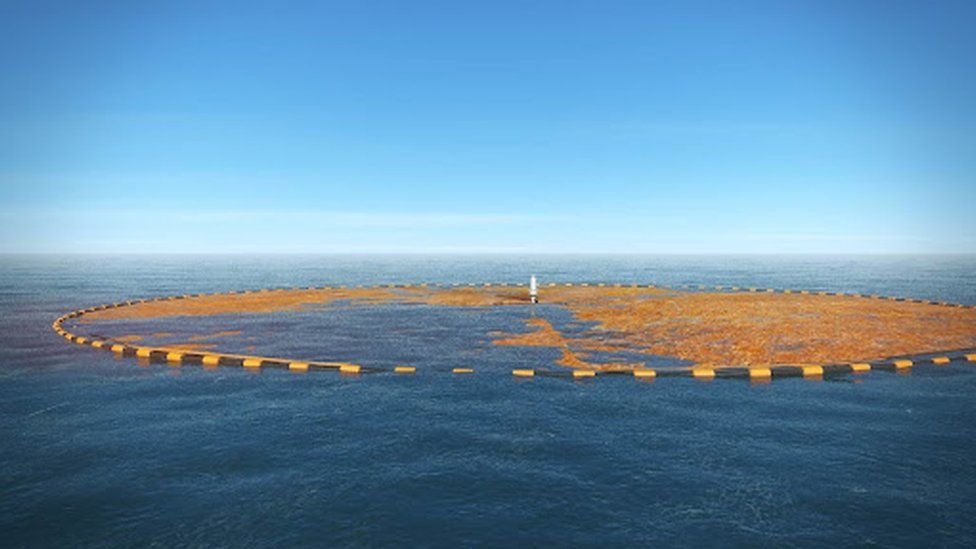 A computer-generated image of a floating Sargasum farm
Seafields' financial backers hope sargassum will float money their way too.
They plan to sell credits for captured carbon on the world's carbon markets.
These credits allow businesses like airlines that cannot easily cut their emissions, to buy up carbon reductions made elsewhere.

Carbon market critics complain the onward rush to monetise CO2 capture has led to backers overselling technologies that eventually fall short of their stated aims.
Which begs the question: will Seafields' promising plan in the laboratory actually work when released into the wild?

Dr Nem Vaughan, associate professor in climate change at the University of East Anglia says: "I'm a boring scientist, [I'd want] more data, more research, before I'd wholeheartedly say that you're going to get that kind of gigatonne-scale removal happening."

Dr Vaughan is also worried about a scheme that itself could have profound impacts on biological systems.
Can Seafields contain so much potentially damaging seaweed out in the South Atlantic? Is the salt fountain robust enough to weather all conditions?
"People wouldn't be very happy," she says, "if tonnes of plastic tubes got set adrift by a big Atlantic storm like we've just had".

She says there are less technologically challenging ways of giving nature a nudge, such as growing more trees and hedgerows and protecting habitats such as peatlands that naturally hold carbon.
But, first and foremost, she says: "We need to not stick it [CO2] up there.
Just leave the fossil fuels in the ground, team.
It's an awful lot easier to just leave it in the ground than it is to try and capture it once it's out."

John Auckland concedes some elements of the process aren't yet proven, but believes it's worth the gamble.
"I see far more risky things on a daily basis that investors are willing to put their money into," he says.
"We can actually make significant gains in solving the climate crisis.
You can't not take this risk, because if everyone thought that way, no-one would be working on solutions of this scale."
Links :
Posted by geogarage at 1:43 AM