By cultivating seaweed, indigenous communities restore connection to the ocean 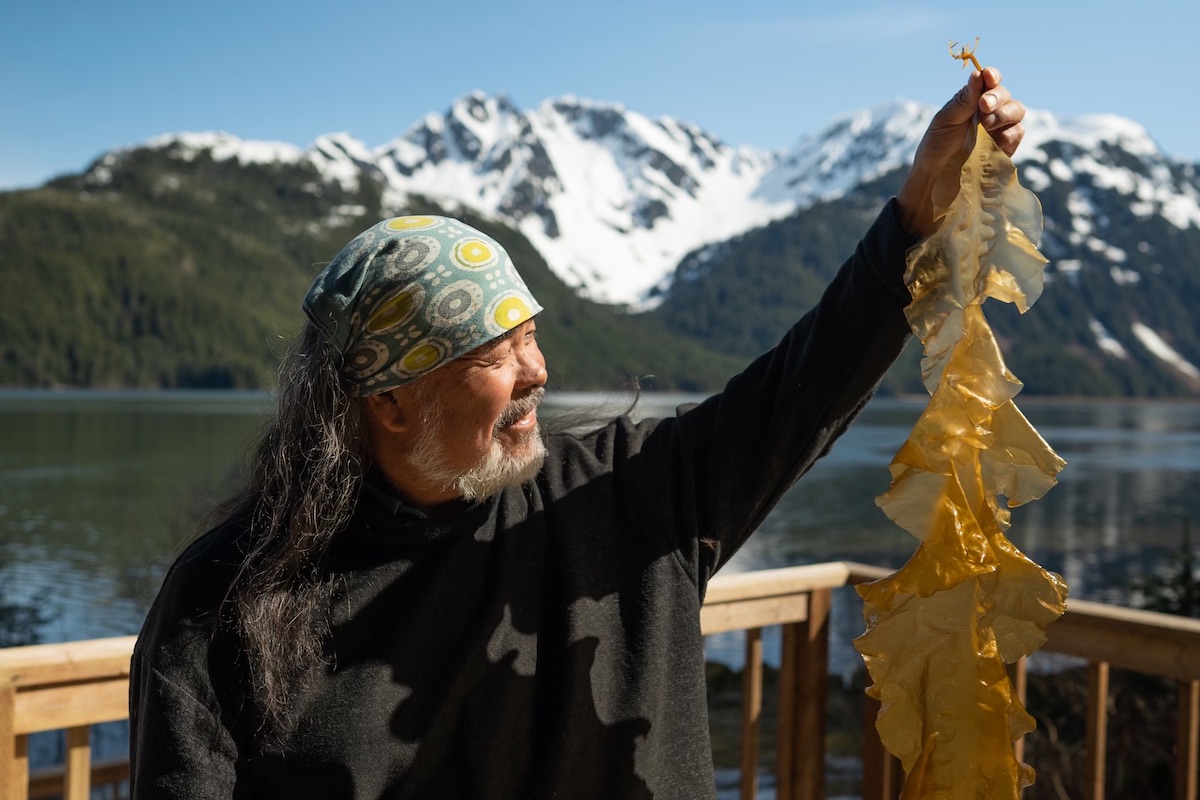 From Mongabay by Claudia Geib

For the uninitiated, the first mouthful of the Hawaiian red algae known as limu kohu (Asparagopsis taxiformis) may be an unpleasant one: intensely iodine-rich and bitter, with all the marine intensity of an oyster but none of its sweetness.
O‘ahu resident Malia Heimuli doesn’t have the ‘ono for it, the Hawaiian word for when something tastes good.
But she says the older people in her life can’t get enough.

“I’m not used to the taste, but my grandma and mom are like, ‘gimme that any day,’” Heimuli says with a laugh.

There’s a reason for that generational divide, and it’s one that Heimuli knows well.
Over the last 50 years, limu kohu, along with many of the 60-plus species of seaweed grouped together in Hawai‘i as limu, became less common on the islands’ shores, the result of changing environmental factors.
With less limu available, many among the most recent generation of Native Hawaiians grew up without learning the culinary, medical and spiritual uses of these algae.

But that’s changing, in Hawai‘i and around the world.
Heimuli is the coordinator of a community group called Limu Hui — a partnership, or gathering, around limu.
Based out of the community environmental nonprofit Kuaʻāina Ulu ‘Auamo (KUA), Limu Hui seeks to both restore the health of Hawai‘i’s limu species, and pass on the ancestral knowledge of limu held by elders to the next generation. 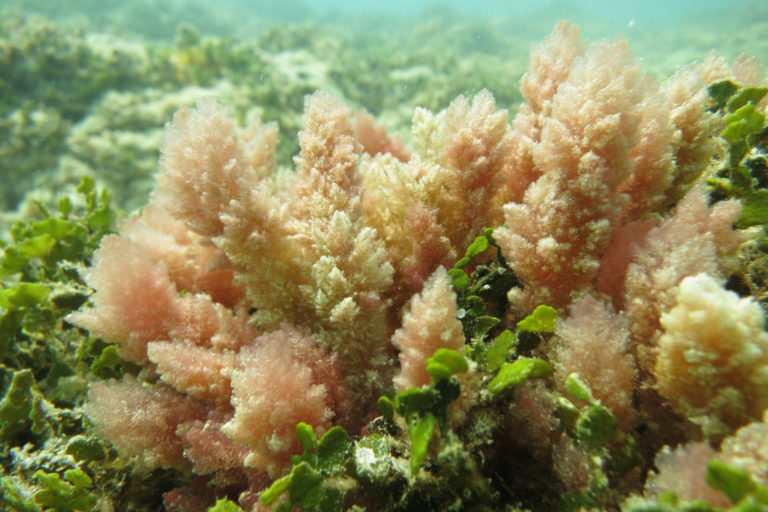 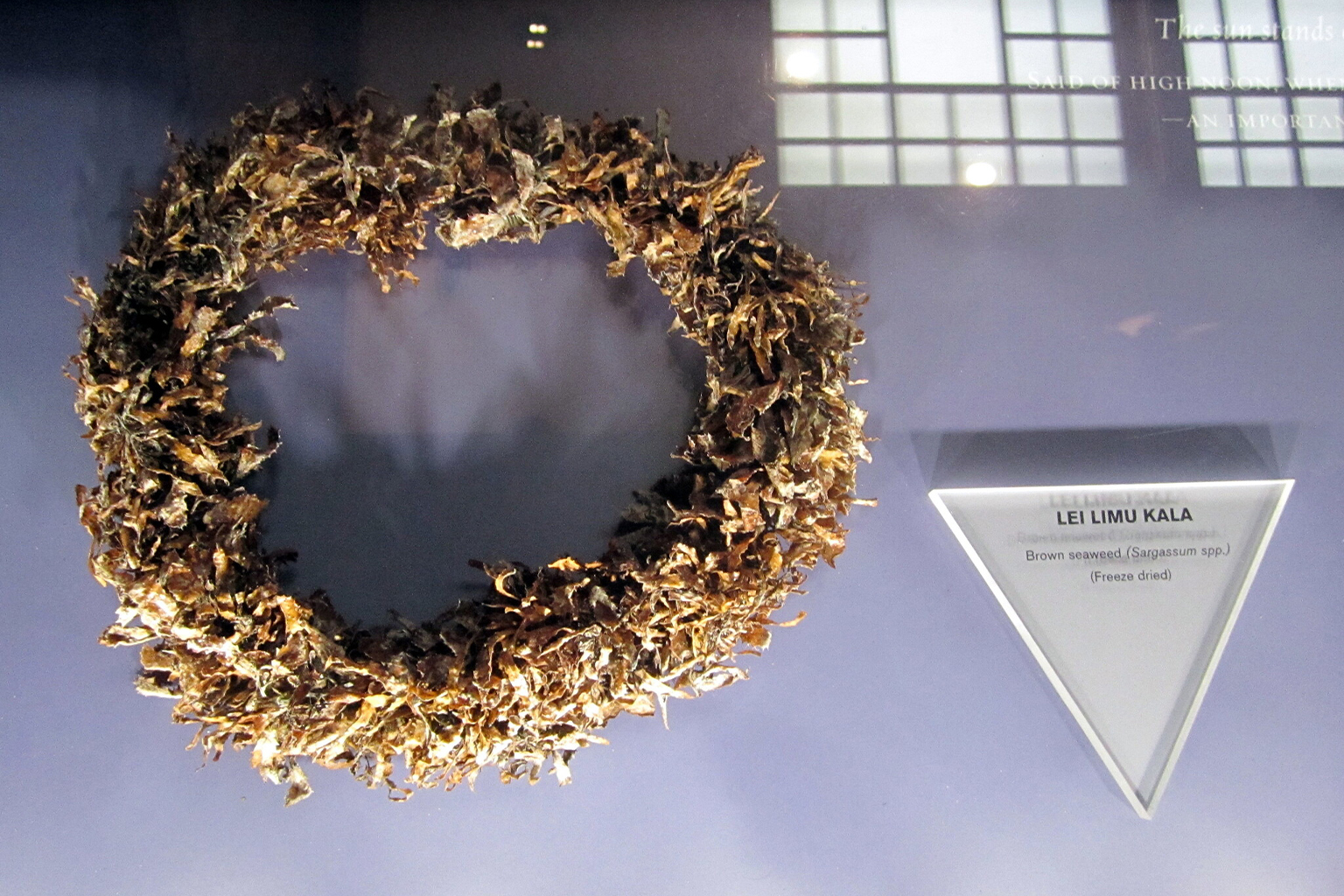 In Hawaii, limu species also have significance outside of serving as food.
This lei, from the Bishop Museum in Oahu, was made of limu kala and used in forgiveness ceremonies to resolve family disputes.
Image by Wally Gobetz via Flickr (CC BY-NC-ND 2.0).
Limu Hui’s work reflects a much broader trend: many Indigenous communities are working to restore degraded seaweed species that support traditional diets.
(Many of these projects work with algae, including limu and kelp, though some touch on seagrasses, a marine plant.) In doing so, these communities are restoring both ecosystems and these species’ traditional cultural functions, a practice known as biocultural restoration.

“If I were to list goals that various community members have expressed, healing from the harms of colonization is one goal, along with food sovereignty and security,” says Melissa Poe, a social scientist at Washington Sea Grant in Seattle and the coordinator of the Indigenous Aquaculture Collaborative Network.
The network helps groups in the Pacific region share information and develop community.
It currently includes at least a dozen groups working on some form of seaweed restoration, and Poe says interest is growing among other network members.

Poe says such work not only enables self-determination, but also the “awakening of knowledge” around resource management from an Indigenous framework: one that recognizes “the kinds of inherent responsibilities and kinship that Indigenous, place-based peoples have with their environments.”

These projects take many forms, including education, ecosystem restoration, commercial farming, research, or a combination thereof.

In Haida Gwaii, a chain of lush islands in British Columbia, Canada, it’s education and restoration.
Each spring, scuba divers swim along coasts once covered in kelp forests with hammers in hand, out to smash sea urchins.

Two centuries without sea otters, hunted for the fur trade, have left these coasts overrun with the urchins, an otter’s meal of choice.
Sea urchins fed voraciously on the holdfasts that keep kelp fixed to the seafloor, decimating Haida Gwaii’s kelp forests.
With the kelp’s decline, the Haida people also face the disappearance of many traditional foods, including abalone — which also graze on kelp — and herring spawn on kelp.
Herring instinctively lay their eggs on the broad leaves of kelp forests, producing a creamy, crunchy delicacy eaten both raw and cooked.

“The work we’re doing directly relates to food security, food sovereignty, and climate resilience, because kelp forests are essentially all of those things combined,” says Jaasaljuus Yakgujanaas, a shellfish biologist at the Council of the Haida Nation who has been a part of the kelp recovery program since 2018. 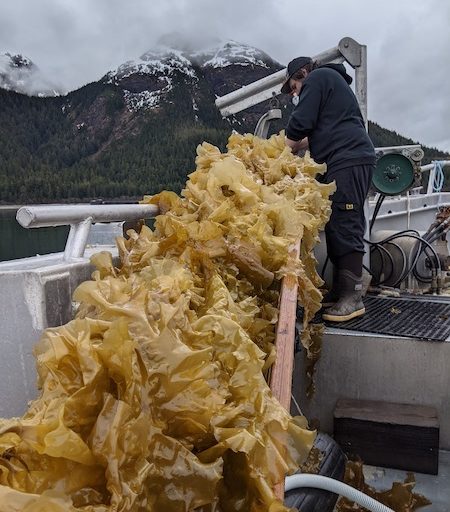 Grafton Schikora harvests sugar kelp grown by the Native Conservancy in Alaska’s Prince William Sound.
Image by Tesia Bobrycki/Native Conservancy.
Beginning in 2017, the Haida Nation teamed up with Parks Canada to conduct a combination of restoration and research over their 3-kilometer (1.9-mile) study site.
Project divers remove more than 75% of urchins at a depth of 17 meters (56 feet) or lower, as well as survey the study site for abalone and other species and collect samples to test ecosystem health.
The team has seen encouraging results.
After urchin removal in 2018, project divers returned the next year to find kelp forest already regrowing in places where there was once little to no growth.

Overgrazed kelp forests become “urchin barrens”; sea urchins there have proliferated so severely that they don’t have sufficient food.
The urchins enter a zombie-like state, slowing their metabolism and reabsorbing their reproductive organs.
This means they contain no roe, a protein-rich traditional food for many First Nations, and one that has been in short supply for the Haida Nation.

Yet this year, Yakgujanaas says the urchins they removed seemed healthier, with better-quality roe.

It’s a sign the project is moving toward its goal of reestablishing balance: between kelp and urchins, and between urchins and the people who treasure them as a food source.
Haida divers now distribute roe to the community when they remove healthy urchins.

As kelp regrows, the Haida Nation hopes to see abalone return, too.
Yakgujanaas notes that her elders harvested abalone as a reliable food source, but she has never been able to; during her lifetime, abalone numbers have been too low for a sustainable harvest.

Kelp forms the backbone of healthy ecosystems, providing food, shelter and oxygen.
The Haida kelp restoration is therefore led by an Indigenous understanding of interconnectedness: that healthy seaweeds sustain the health of the ecosystem as a whole. 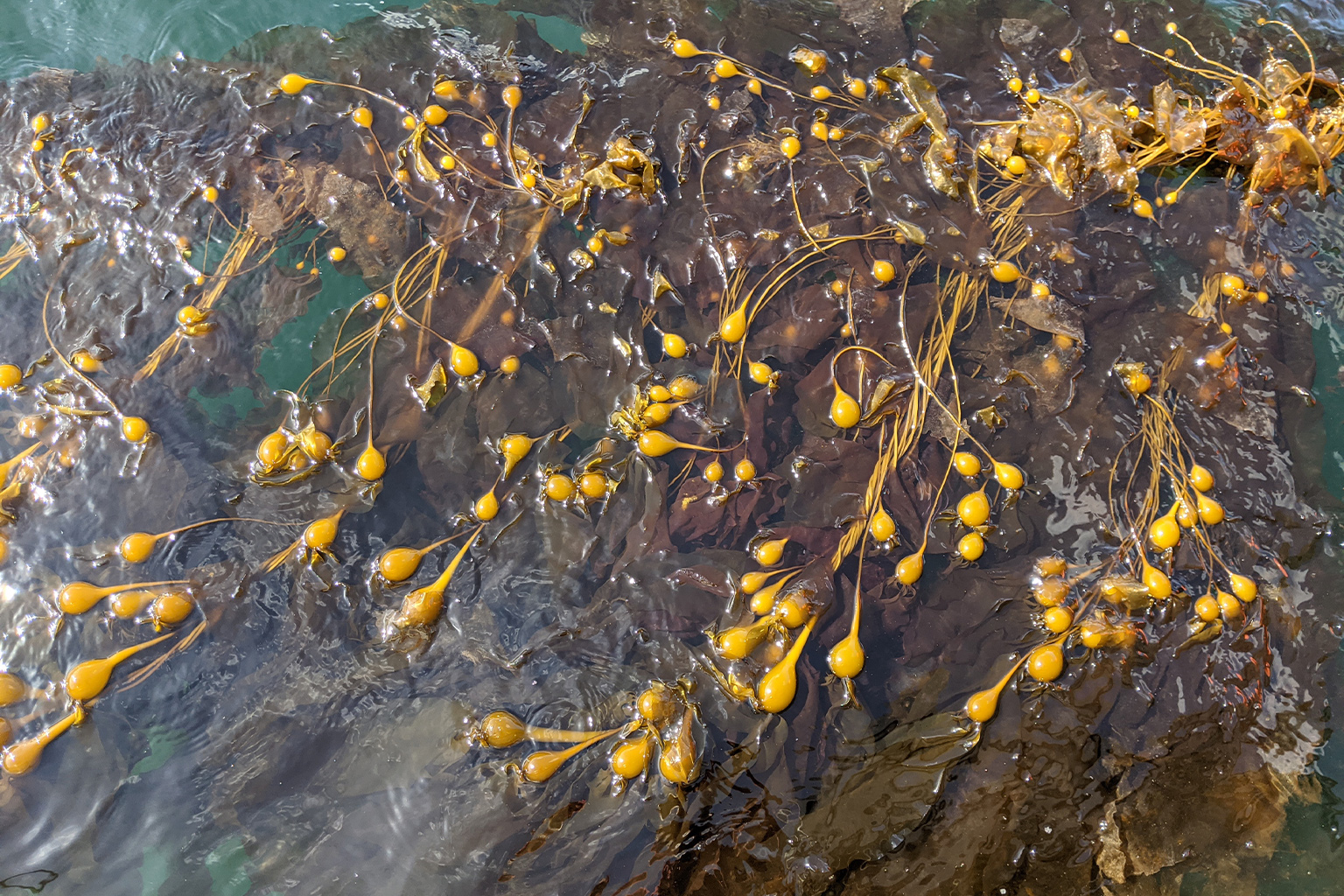 Young bull kelp on a growline in Prince William Sound, Alaska.
Image courtesy of Tesia Bobrycki/Native Conservancy.
It’s a theme shared across many Indigenous seaweed projects, regardless of what form they take.

On British Columbia’s Central Coast, the Heiltsuk Nation and scientists from Simon Fraser University piloted research studying whether commercially harvesting feather boa kelp (Egregia menziesii) could be sustainable for both the algae and the ecosystem it supports.
They found that, by following traditional Heiltsuk practices of only harvesting part of each individual kelp at a time, it actually grew back more enthusiastically than if left alone.

“People were really excited [about] these results, that if we’re careful about following these partial harvesting rules, it really is and can be sustainable just as Heiltsuk knowledge suggests,” says Hannah Kobluk, a Ph.D.
researcher at Simon Fraser who took part in the project.
She says their research underlined “the richness that comes from drawing from multiple forms of knowledge, whether it be Indigenous, local, fishermen themselves … it all paints a way richer picture.”

In Alaska, the Cordova-based Native Conservancy has started several pilot programs in kelp farming.
The goal is to create a “regenerative kelp economy based on conservation, restoration and mitigation — not another resource extraction job in Alaska,” says founder and president Dune Lankard, a member of the Eyak tribe.

Lankard’s hope is that their kelp farms will not only provide kelp itself — fresh, frozen, and dried, for local consumption and to bring to market — but also create shelter where wild salmon can hide from predators, and surface area where herring can lay their eggs.

The Native Conservancy currently has nine test sites along a more than 160-km (100-mile) stretch in Prince William Sound, where kelp grows affixed to long anchored lines, as well as a test farm that the conservancy seeded with ribbon, sugar and bull kelp (Alaria marginata, Laminaria saccharina and Nereocystis luetkeana) in the fall of 2021.

The goal is to make a trifecta of food source, sellable products, and stable jobs for Alaska’s Indigenous communities.
In many, Lankard says, locals choose to move away when they reach adulthood because of the lack of consistent work.
That diaspora has exacerbated a disconnect with the ocean and traditional practices. 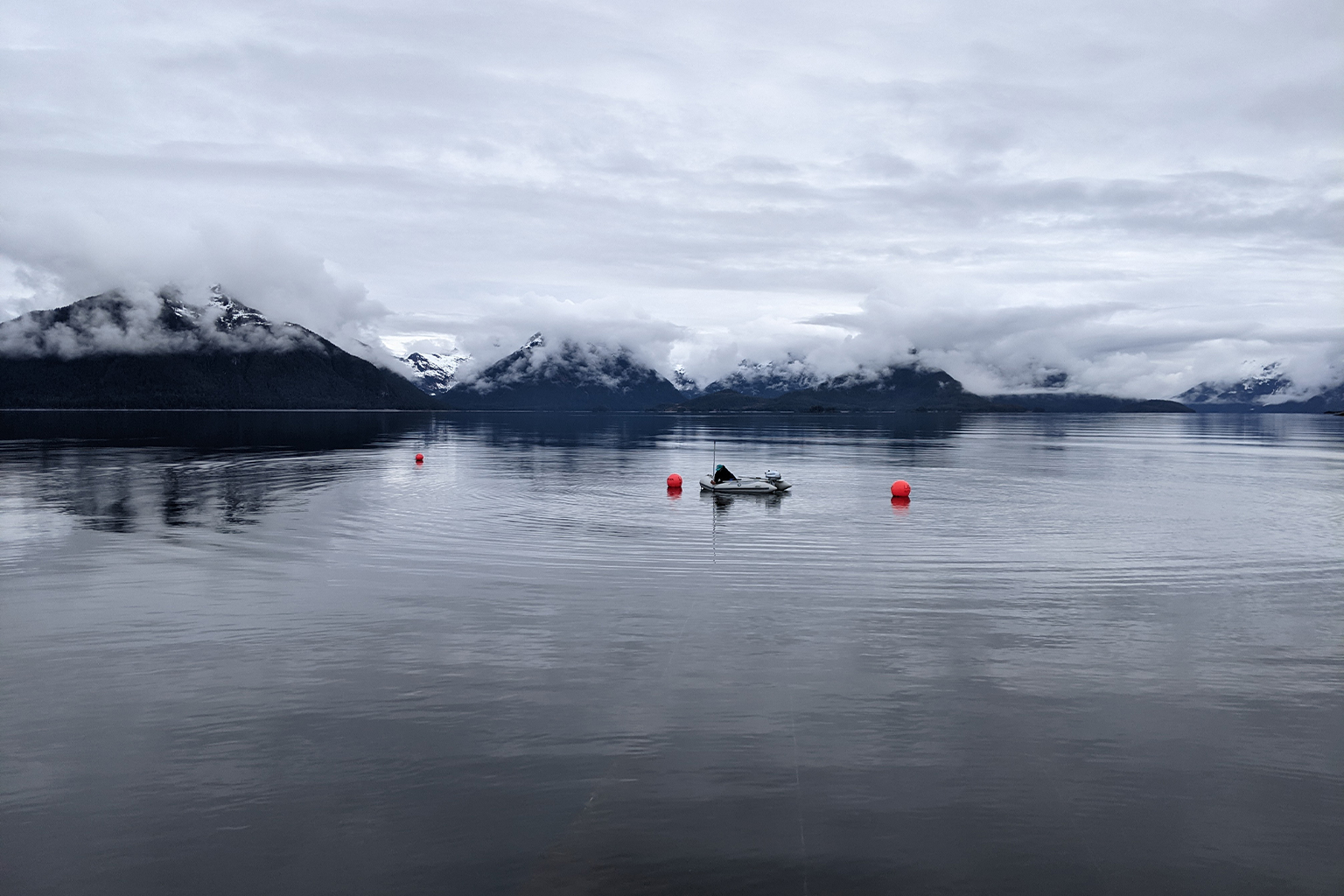 Tyler Quales monitoring grow lines in Prince William Sound, Alaska.
Image courtesy of Tesia Bobrycki/Native Conservancy.
“Native peoples are the original guardians and stewards of their ancestral lands and waterways,” Lankard says.
“If we’re able to build an industry that’s based on one of our traditional food sources and ways of life, it adds that cultural aspect, that spirit, and that relationship with the ocean.”

This relationship becomes particularly important when climate change is thrown into the mix.
For all of the Indigenous groups Mongabay spoke with, climate change is top of mind, especially the question of how warming waters could harm the very seaweed these groups seek to preserve.

Conversely, seaweed could help mitigate climate change.
A 2016 paper estimated that macroalgae sequester 173 million metric tons of carbon every year as they float offshore and eventually sink into the deep sea.
Some research also suggests seaweed buffers against ocean acidification, providing oases of safety as the ocean’s pH drops.
Yet at the same time, the warmer, more nutrient-poor waters that come with climate change are stressing these species; recent marine heat waves have been particularly devastating for kelp forests.

Even so, there is refuge, and hope, in the traditional knowledge deployed for these projects.

“There have been many millennia of environmental and climate changes in the past; that ancestral knowledge has helped communities survive and thrive to this day,” says Poe.
“Sometimes the community members in our network use the phrase, ‘looking to the past to prepare for the future.’”

In Hawai‘i, Limu Hui is breaking new ground as it tests methods of transplanting limu species grown in tanks to the wild ocean.
Yet the group’s members emphasized that Limu Hui’s true focus is encouraging relationships with limu itself. 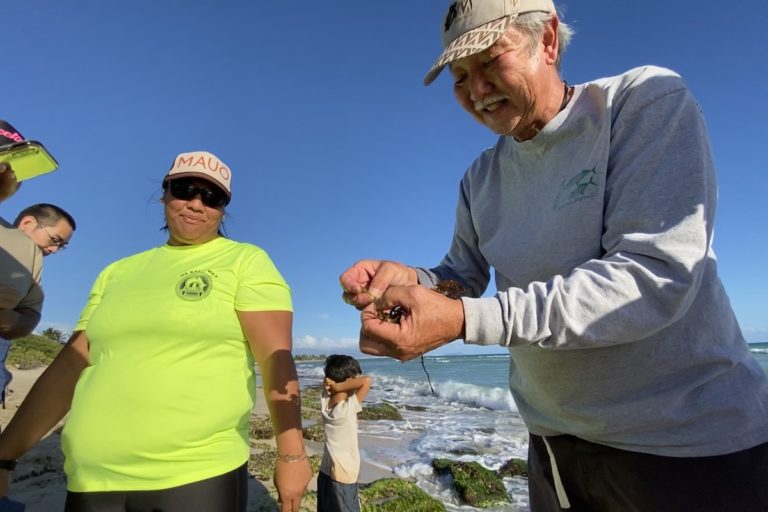 Limu Hui coordinator Wally Ito shows some limu to participants of the organization’s regular limu walks in Hawai‘i, which help locals connect with local seaweed species.
Image by Kim Moa/KUA.
“The idea of limu restoration is not so much just limu planting; it’s a pathway for community cohesion,” says Wally Ito, a co-founder of Limu Hui.
“To get younger kids out of the house, and get them to touch the limu.
Smell the limu.
Taste the limu.
We have this taste, this ‘ono, of limu.
But we cannot pass on that taste to the next generation.
They gotta taste it for themselves.”

Miwa Tamanaha, former co-director of KUA and a founding member of Limu Hui, noted that public attention to marine algae is also growing outside of Indigenous communities; the recent explosion of seaweed farming is a prime example.
As humanity experiences a collective loss of biodiversity, habitat and community, Tamanaha says this interest “maybe is an indicator of re-centering relationship — what each of our places wisely has to feed us, and what we wisely have to give to our places in turn.”
Links :
Posted by geogarage at 1:40 AM