Preparing for rising seas in the Maldives 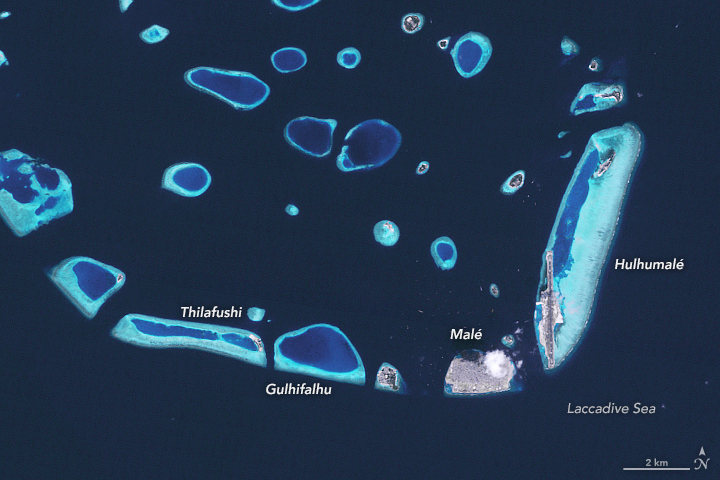 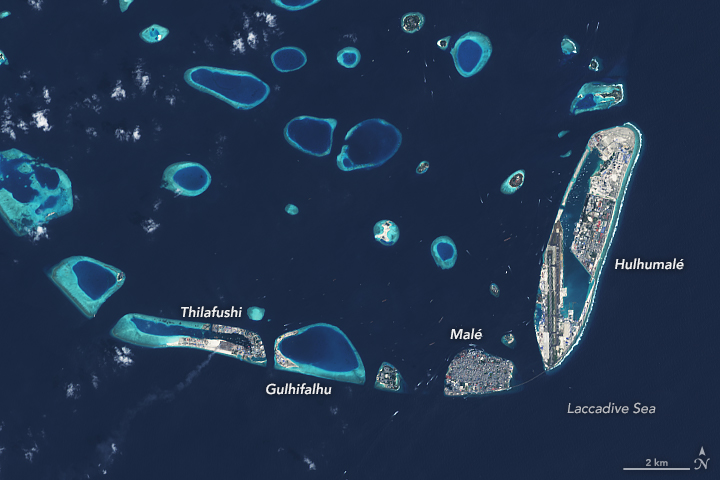 acquired February 19, 2020
From NASA
With more than 80 percent of its 1,190 coral islands standing less than 1 meter above sea level, the Maldives has the lowest terrain of any country in the world.
This makes the archipelago in the Indian Ocean particularly vulnerable to sea level rise.
With global sea level rising 3 to 4 millimeters per year, and that rate expected to rise in coming decades, some analysts anticipate a grim future for the Maldives and other low-lying islands.
One study concluded that low-lying islands could become uninhabitable by 2050 as wave-driven flooding becomes more common and freshwater becomes limited.

Sea elevation
©Christophe Chabert
The Intergovernmental Panel on Climate Changes anticipates sea level could rise by about half a meter by 2100 even if greenhouse gas emissions are sharply reduced or rise up to 1 meter if greenhouse gas emissions continue to increase strongly.
While the Maldives government has explored plans to purchase land on higher ground in other countries as an insurance policy against sea level rise, planners are also working to enhance the resilience of the country’s current islands.
One example is Hulhumalé, a newly constructed artificial island northeast of the capital, Malé.
The pair of Landsat satellite images above show just how much the area has changed between 1997 and 2020.
Construction of the island, designed to relieve crowding in Malé, began in 1997 in a lagoon near the airport.
Since then, the island has grown to cover 4 square kilometers, making it the fourth largest island in the Maldives.
Hulhumalé’s population has swollen to more than 50,000 people, with 200,000 more expected to eventually move there.

Localization with the GeoGarage platform (NGA nautical raster chart)
The new island, built by pumping sand from the seafloor onto a submerged coral platform, rises about 2 meters above sea level, about twice as high as Malé.
The extra height could make the island a refuge for Maldivians who are eventually driven off lower-lying islands due to rising seas.
It could also prove to be an option for evacuations during future typhoons and storm surges.
Hulhumalé is not the only island in the Maldives that has seen major changes since the 1990s. Reclamation projects have enlarged several other atolls in similar ways in recent decades.
Among them is Thilafushi, a lagoon to the west that has became a fast-growing landfill and a common location for trash fires (note the smoke plume blowing to the southwest in the 2020 image). Gulhifalhuea is the site of another land reclamation project that is opening up new manufacturing and industrial space.
There is one piece of positive news: natural processes on coral reef atolls (like those in the Maldives) might make the islands more resistant to sea level rise than their low elevations might initially suggest.
Multiple studies, many of which use Landsat observations, show that most coral atoll islands in the Maldives and elsewhere have remained stable or even grown larger in recent decades.
Scientists are still studying why, but some research indicates that storms and floods that wash over islands can move offshore sediment onto the island surface, building the island up in the process. Other research shows that healthy coral reefs can grow upward even when seas are rising by producing abundant sediment.
“The key thing to understand is that these islands aren’t static. They don’t sit passively as if they were in a bathtub and slowly drowning,” said Murray Ford, a geologist at the University of Auckland.
“They are constantly being reshaped by oceanographic and sedimentary processes.”
These natural processes may offer only limited protection to highly developed islands, partly because the construction of sea walls can disrupt the movement of sediment and human activity often degrades the health of coral reefs.
“Once an island is on an engineered pathway, it can’t easily get off it. Islands that are being built on reclaimed land must factor in sea level rise and build higher off the ground,” said Murray.
“For islands that are unpopulated, or sparsely populated, care should be taken to not interfere with the natural ability of islands to adjust to changes in sea level.”
Links :
Posted by geogarage at 1:31 AM