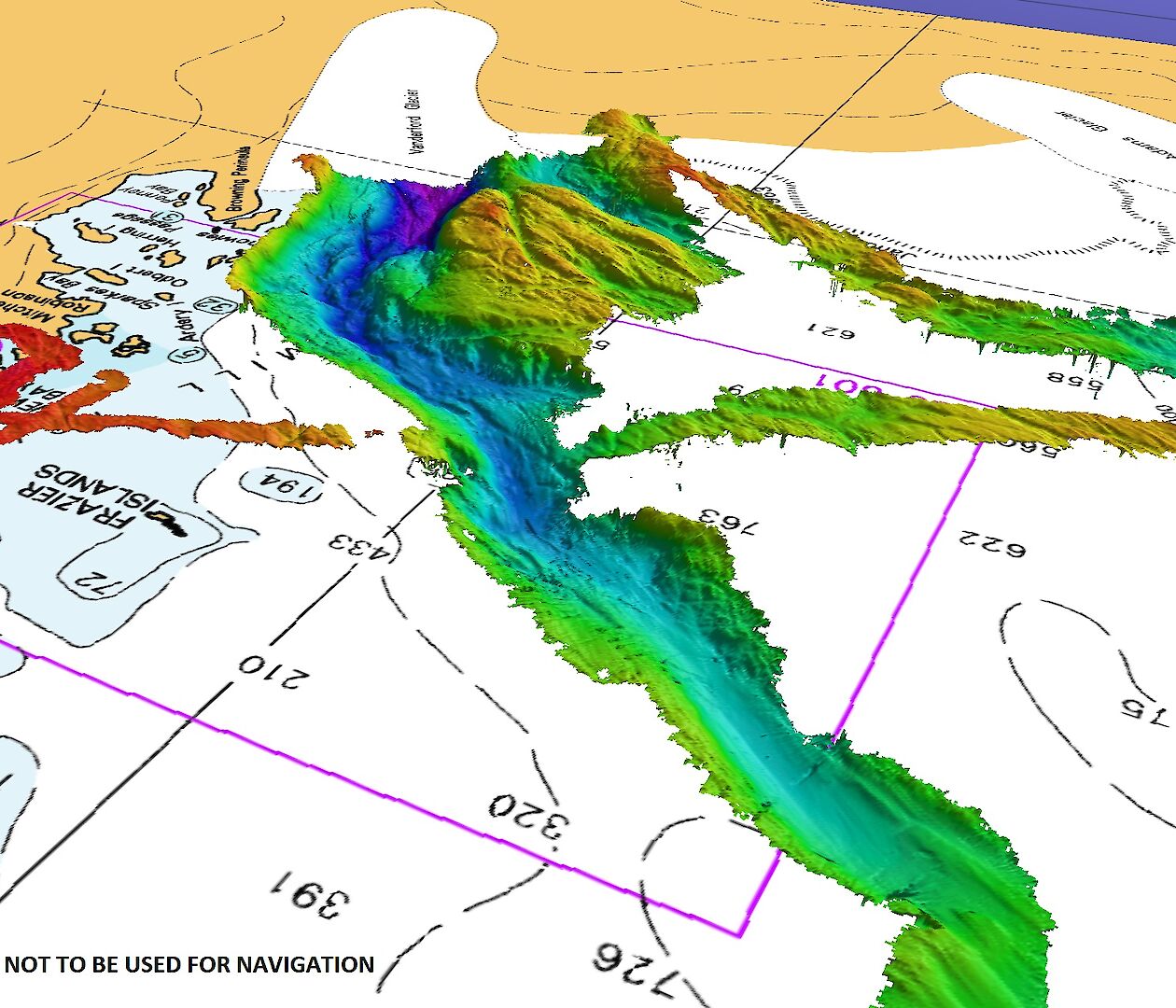 The AAD acoustics team used Nuyina’s multibeam echosounders to map more than 840 square kilometres of the seafloor in front of the Vanderford Glacier, following a canyon more than 55 kilometres long, and 2200 metres deep at the deepest point mapped (in purple).
Hydrographic Material reproduced with permission of The Australian Hydrographic Office © Commonwealth of Australia 2022
Photo: Pete Harmsen/AAD
From Antarctica
A deep canyon at the front of the Vanderford Glacier in East Antarctica has been mapped for the first time by acousticians on board RSV Nuyina. 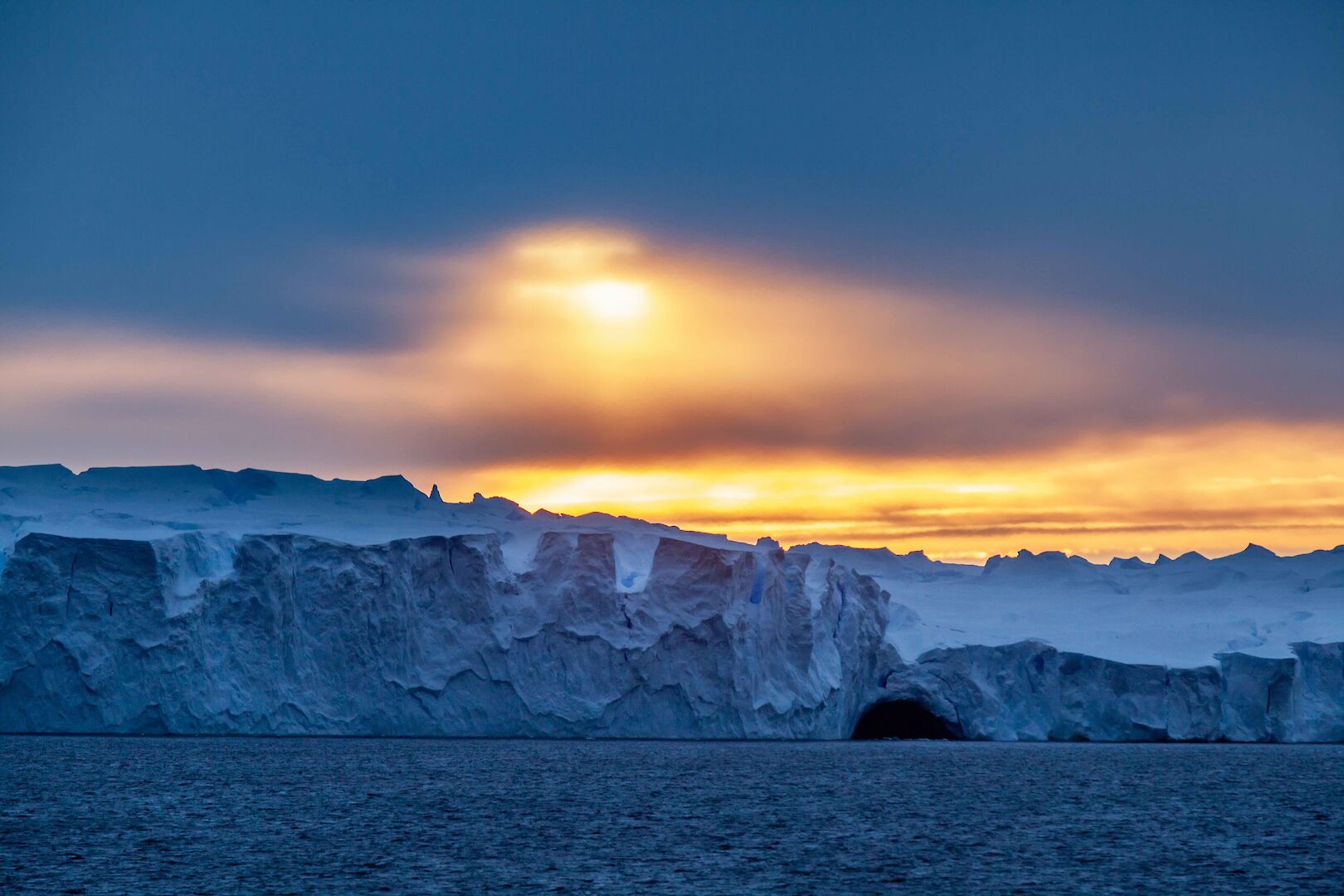 No info with STRM bathymetry data
As the ship navigated Vincennes Bay in front of the glacier, acousticians Jill Brouwer, Alison Herbert and Floyd Howard switched on the ship’s EM122 multibeam echosounder and were surprised by what they saw. 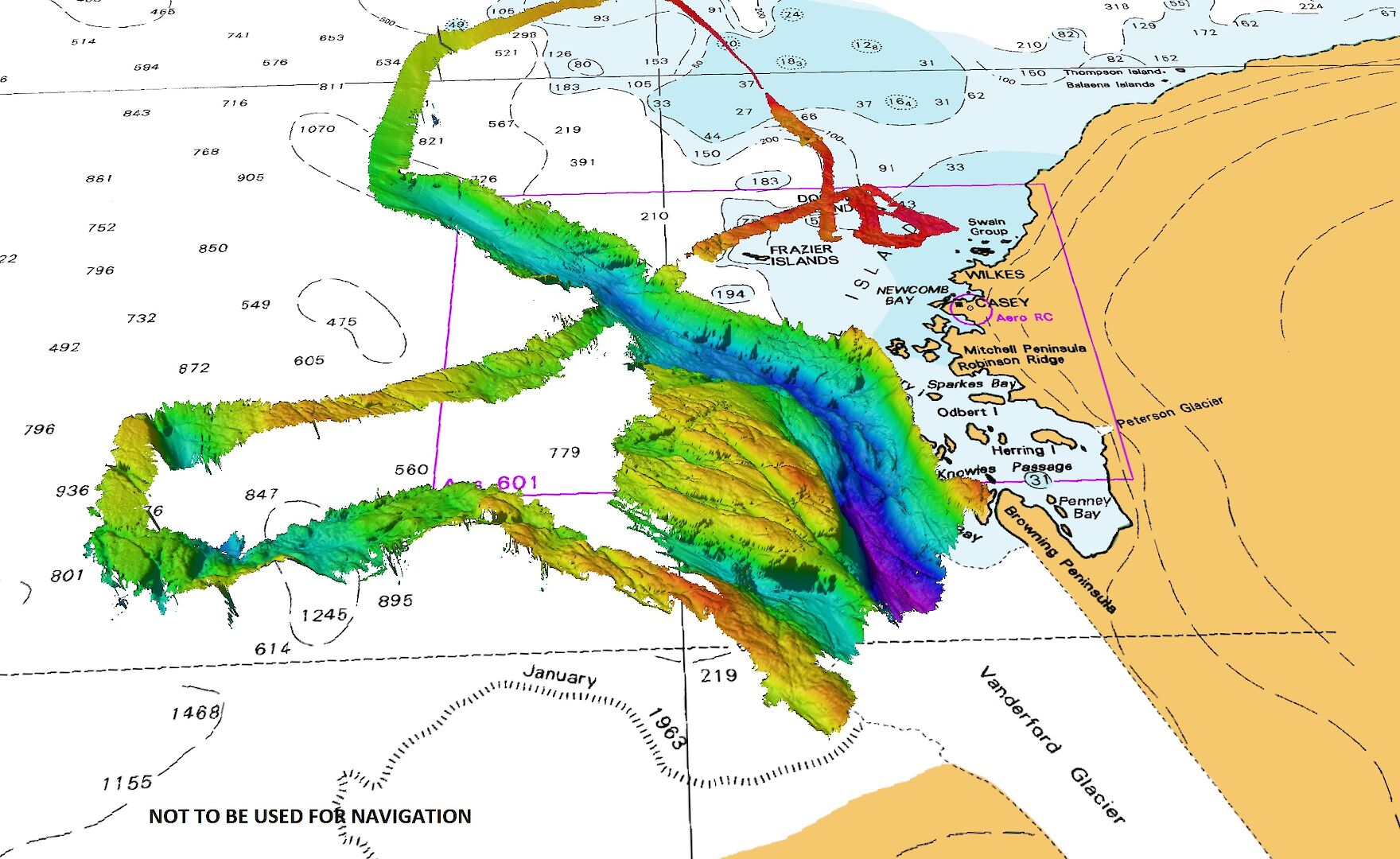 The AAD acoustics team used Nuyina’s multibeam echosounders to map more than 840 square kilometres of the seafloor in front of the Vanderford Glacier, following a canyon more than 55 kilometres long, and 2200 metres deep at the deepest point mapped (in purple).
Hydrographic Material reproduced with permission of The Australian Hydrographic Office © Commonwealth of Australia 2022
(Photo: Pete Harmsen/AAD)
“Although we’ve been visiting this region for decades on the Aurora Australis, we haven’t had the capability to do this sort of detailed mapping before,” Mr Howard said.
“As a result, current navigational charts of this area are based on fairly limited surveys.”
“Our work has shown that the seafloor is deeper and more complex than we thought.” 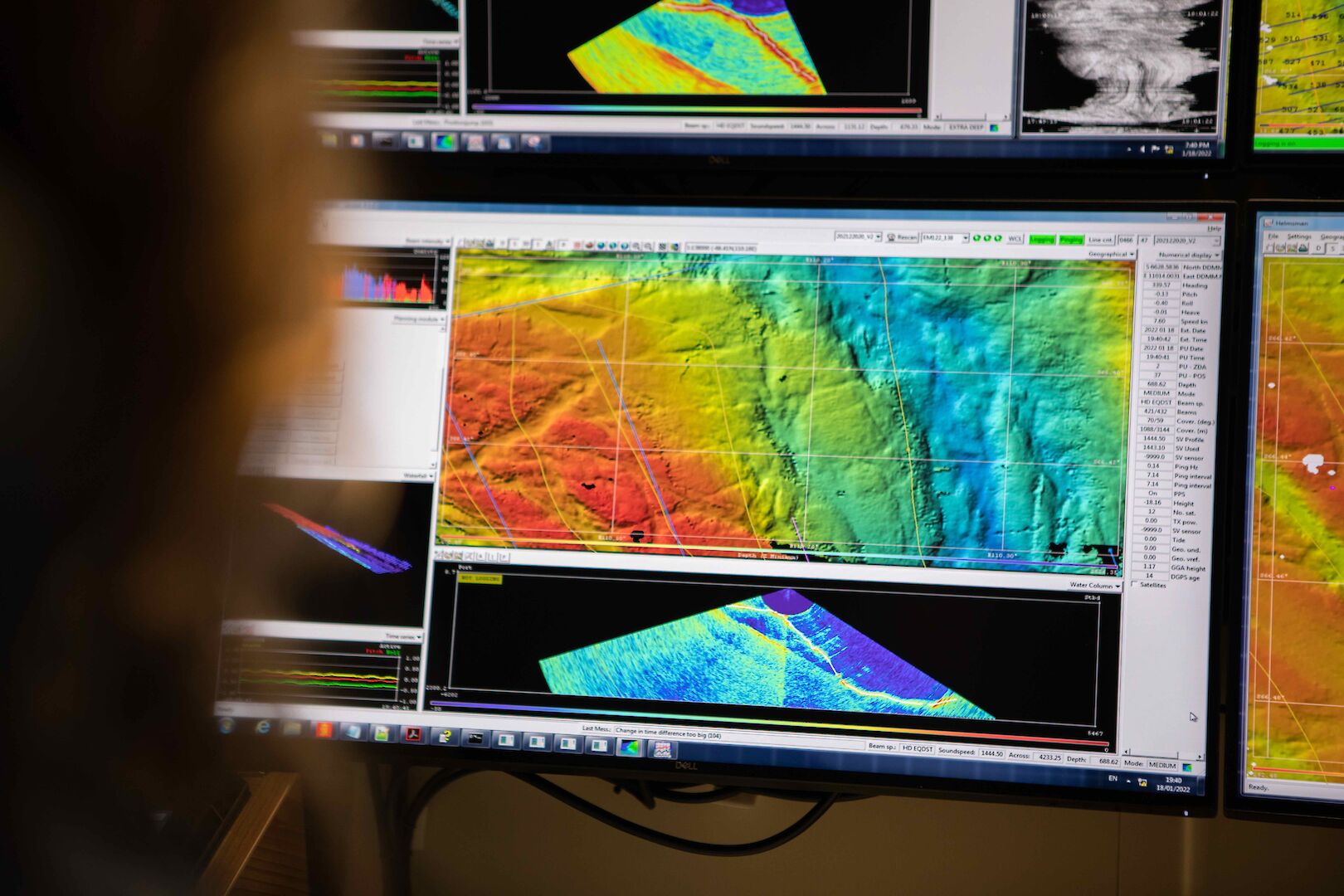 Some of the multibeam echosounder data showing the structure of the seafloor in front of the Vanderford Glacier, with different colours representing different depths. (Photo: Pete Harmsen/AAD)
The multibeam echosounder sends out pings of sound in a fan-shape beneath the ship and ‘listens’ to the returning echoes to build a picture of the seafloor.
The sideways projection of sound also allowed the team to map the canyon underneath the glacier for up to three and a half kilometres from the front.
Voyage Leader Lloyd Symons said it’s not unusual to see interesting features in front of glaciers, which scour the seafloor as they advance or retreat, and drop rocks or ‘erratics’ along the way. AAD acoustician Jill Brouwer monitoring the multibeam echosounder as the undiscovered canyon in front of the Vanderford Glacier is revealed.
(Photo: Pete Harmsen/AAD)
But he wasn’t expecting a canyon this deep.
“It is truly mind boggling to look northward to the nearby Browning Peninsula and know that there is 2200 metres of water underneath the keel,” he said.
“It will be really interesting to see how we can use Nuyina’s acoustic capabilities to improve our understanding of the seafloor bathymetry around our other stations in the future, particularly the approach to Mawson, which has a deep, narrow channel surrounded by pinnacles of rock.” 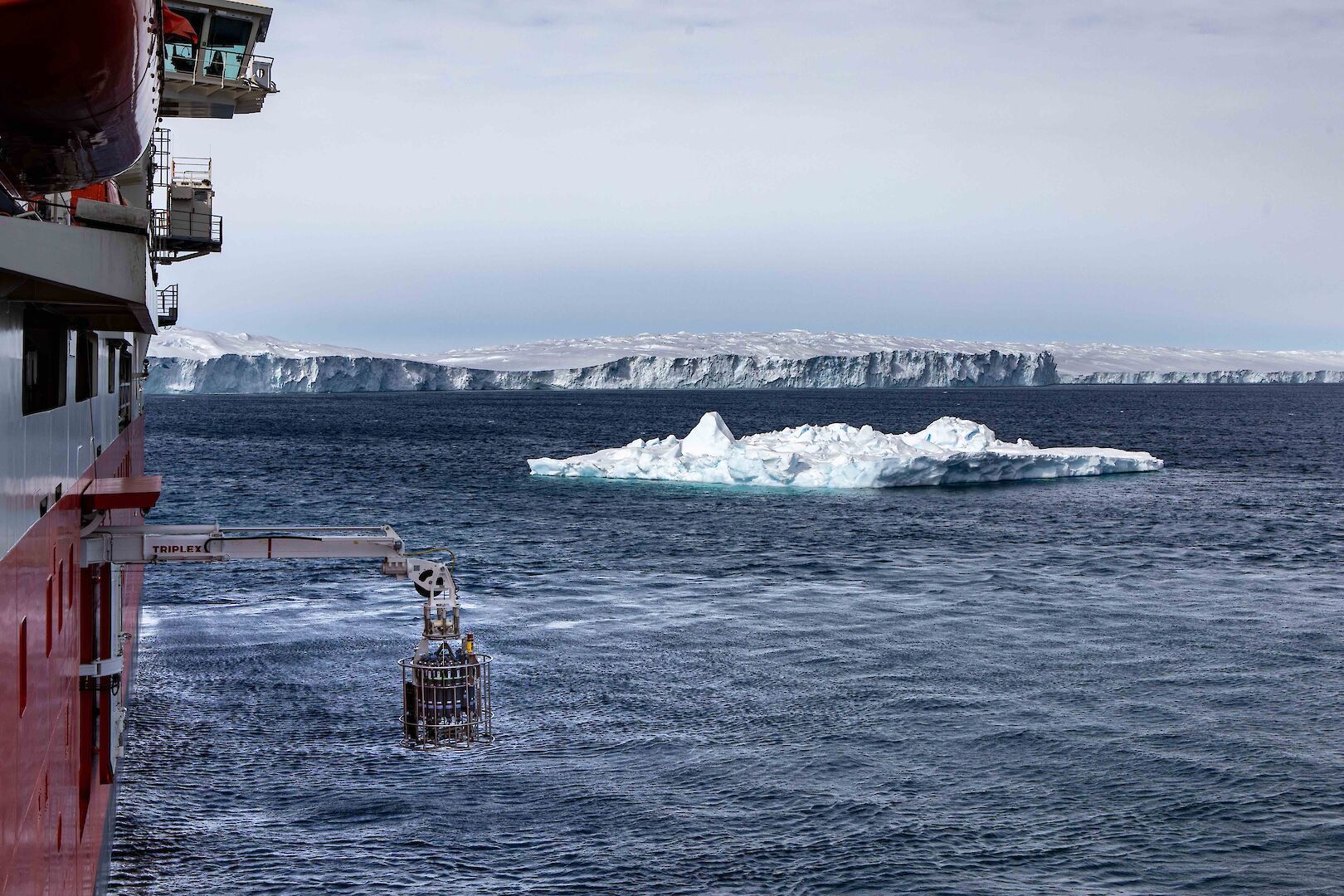 A conductivity, temperature, depth (CTD) instrument was deployed into the deepest part of the canyon, 2200 metres below, to measure water properties such as temperature and salinity.
(Photo: Pete Harmsen/AAD)
The technical team on board also sampled the water in the canyon using a conductivity, temperature, depth (CTD) instrument, deployed to just three metres above the seafloor.
CTDs are used by oceanographers to measure changes in water properties – including ocean temperature and salinity near glaciers, to understand how warming water contributes to glacial melt from below.

The data from this and other mapping efforts on board Nuyina will feed into global efforts to map the world’s oceans by 2030.

Acoustics experts and science systems engineers on the ship are from the AAD’s Technology and Innovation Branch, funded by the Australian Government to manage the suite of world-leading science systems on board RSV Nuyina.
Links :
Posted by geogarage at 1:07 AM