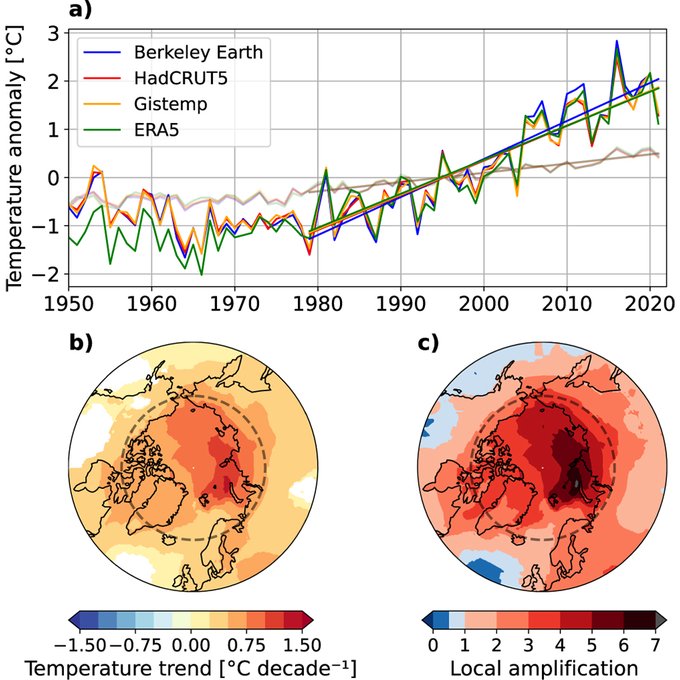 The Arctic has warmed nearly 4 x faster than the global average since 1979, more than previously thought, per study by Finnish Meteorological Institute scientists
From The Guardian by Damian Carrington 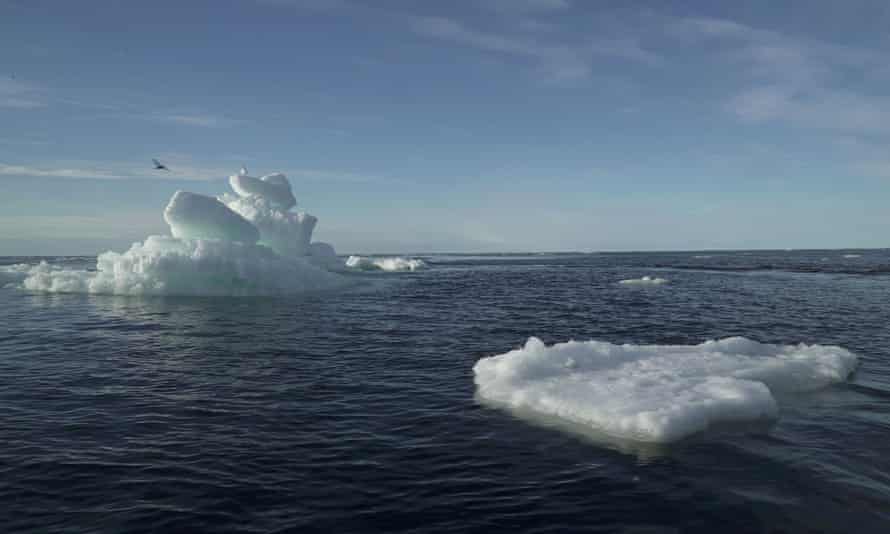 Snow weighs the ice down, so it is critical to know how deep it is in order to calculate the thickness of the ice.
Photograph: Natalie Thomas/Reuters
Sea ice across much of the Arctic is thinning twice as fast as previously thought, researchers have found.

Arctic ice is melting as the climate crisis drives up temperatures, resulting in a vicious circle in which more dark water is exposed to the sun’s heat, leading to even more heating of the planet.

The faster ice loss means the shorter north-eastern shipping passage from China to Europe will become easier to navigate, but it also means new oil and gas extraction is more feasible.

Calculating the thickness of sea ice from satellite radar data is difficult because the amount of snow cover on top varies significantly.
Until now, the snow data used came from measurements by Soviet expeditions on ice floes between 1954 and 1991.
But the climate crisis has drastically changed the Arctic, meaning this information is out of date.

The new research used novel computer models to produce detailed snow cover estimates from 2002 to 2018.
The models tracked temperature, snowfall and ice floe movement to assess the accumulation of snow.
Using this data to calculate sea ice thickness showed it is thinning twice as fast as previously estimated in the seas around the central Arctic, which make up the bulk of the polar region.

Robbie Mallett of University College London, who led the study, said: “Sea ice thickness is a sensitive indicator of the health of the Arctic – and, when the Arctic warms, the world warms.

“Thicker ice acts as an insulating blanket, stopping the ocean from warming up the atmosphere in winter and protecting the ocean from the sunshine in summer.
Thinner ice is also less likely to survive during the Arctic summer melt.” 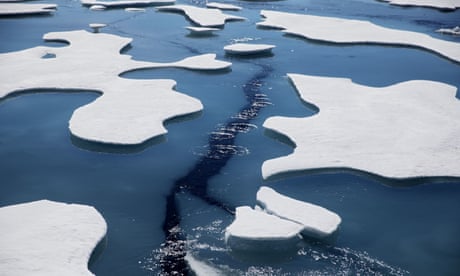 Rising temperatures shrink Arctic sea ice to second-lowest level on record
Changes in the Arctic are also increasingly believed to influence extreme weather such as heatwaves and floods around the northern hemisphere.
The rapid thinning of sea ice has consequences for human activities in the Arctic as well.
Advertisement

In February, a cargo ship made a round trip for the first time in winter.
“However, this also raises the risk of fuel spillages in the Arctic, the consequences of which could be dire,” said Mallett.

“There’s also a lot of interest in oil and gas extraction from the Russian shelf seas,” Mallett said.
But the research revealed much greater annual variability in ice thickness than estimated before.
“Knowing the thickness of the ice is pretty critical to planning those activities, so the enhanced variability is generally bad news for those planning to work in the Arctic,” he said.

The Soviet-era data was hard won, Mallett said.
“They sent these brave guys out and they sat on these drifting stations and floated around the Arctic, sometimes for years at a time, measuring the snow depth.” But the Intergovernmental Panel on Climate Change identified the lack of more recent data as a key knowledge gap in 2019.

Sea ice thickness is calculated from satellite radar data that measures how high the ice sits above the sea surface.
Snow on top of the ice is invisible to the radar signals but it weighs the ice down, so it is critical to know the depth of snow.

“Sea ice has begun forming later and later in the year, so the snow on top has less time to accumulate,” said Mallett.
“Our calculations account for this declining snow depth for the first time.”
The research is published in the journal The Cryosphere.

“We are still learning about the changes to the Arctic environment, and one of the big unknowns – or less well-knowns – is snow cover,” said Walt Meier, at the US National Snow and Ice Data Center, and not involved in the new research.
“The approach in the study is a significant improvement over older methods, and the results fit with other changes we’re seeing with Arctic sea ice, including earlier melt onset, lower summer ice cover, and later freeze-up.”

Prof Julienne Stroeve, at UCL, said: “There are [still] a number of uncertainties but we believe our new calculations are a major step forward.
We hope this work can be used to improve climate models that forecast the effects of long-term climate change in the Arctic – a region that is warming at three times the global rate and whose ice is essential for keeping the planet cool.”