The plans for giant seaweed farms in European waters

The seaweed in the pilot test was harvested by a mechanical arm
At a testing site way off the Dutch coast a breakthrough was made this summer.

Some 12km (7.5 miles) out at sea, a converted fishing boat mechanically harvested a batch of farmed seaweed.

The kelp had been grown on netting hanging below a 50m (164ft) long plastic tube that was floating on the water, held in place by buoys and two anchors on the seafloor.

The boat was positioned alongside, and an 8m tall, electric-powered cutting arm was moved into the water.
It pulled up the tubing and sliced the long strands of seaweed from the 2m wide net.
The seaweed was then automatically bagged-up, and dropped onto the deck.

North Sea Farmers, the consortium behind the test, says it was the world's first mechanical harvest of an offshore (some distance from the coast) seaweed farm.

Eef Brouwers, North Sea Farmers' manager for farming and technology, says that the successful harvest was "an important first step" towards the large-scale cultivation of commercial seaweed farms in the North Sea. 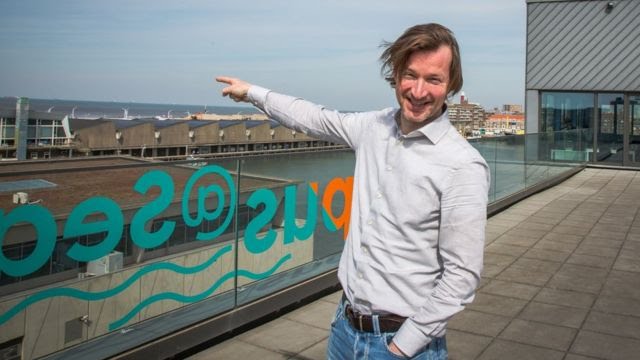 Image : Tristen Taylor
Eef Brouwers, pointing in the direction of the seaweed farm out at sea, says that the North Sea Farmers consortium will now move onto larger-scale testing as it moves towards commercial production
North Sea Farmers has almost 100 members including food and consumer goods giant, Unilever, and energy firm Shell.
They hope to dramatically increase Europe's production of farmed seaweed over the next decade.

Currently global seaweed production is dominated by Asia, and particularly China.
The total worldwide harvest in 2019 was 35.8 million tonnes, and of that amount 97% came from Asia, with more than half from Chinese waters.
By contrast, Europe produced just 287,033 tonnes that year, or 0.8% of the global total, with almost all of this being the harvesting of wild stocks.
While most of us don't give seaweed much thought, it is an increasingly sought after crop.
Its uses ranging from a human food and additive, to animal feed, land fertilizer, an ingredient in cosmetics, as a form of bio-packaging in place of plastic, as a biofuel, and to absorb carbon dioxide.

There are thousands of different types of seaweed around the world, but seven are harvested more than most.
These include kelp and pyropia.
The latter is used to make nori, the dried Japanese seaweed sheets that wrap rolled sushi.

The seaweed industry was worth $40bn in 2020, according to one report. However, the same study predicts that this will soar to $95bn by 2027.

Given those figures, it is not surprising that European producers wish to start farming seaweed at significant scale.
Seaweed for Europe, another trade group for seaweed producers, wants the European Union to produce eight million tonnes of farmed seaweed by 2030.
Adrian Vincent, an associate at the organisation, says this goal is "ambitious but completely achievable".
What will greatly help is that the target is being backed by the European Commission.
A spokesman for Brussels added that the EU is already giving financial support of €273m ($277m; £228m) to seaweed projects, a figure "that is expected to grow".

Meanwhile, the Dutch government is proposing setting aside 400 sq km (154 sq miles) of its territorial waters in the North Sea for large-scale seaweed cultivation. Germany and the Republic of Ireland are also at the forefront of developments. In the UK, which of course is no longer in the European Union, Scotland is leading the way.

Dutch firm The Seaweed Company is now farming kelp off the west coast of Ireland, plus in Moroccan and Indian waters, and in its home country.
"We are seaweed pioneers," says Joost Wouters, the firm's founder.
"Scale and speed is our mission. To be sustainable from the financial, social and ecological side, you need a lot of seaweed." 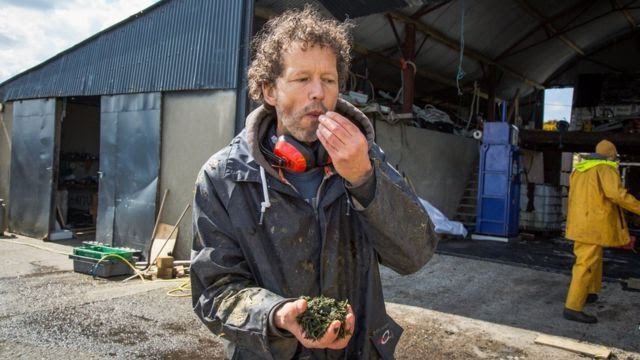 Image : Tristen Taylor
Joost Wouters tasting seaweed at his company's Irish processing facility
Located above the picturesque Mulroy Bay in County Donegal, the company's Irish processing facility consists of a barn where harvested seaweed is shredded and then dried in in the firm's specially-designed own machine.
Mr Wouters refuses to allow the dryer and mechanical cutters to be photographed, wanting to protect the company's technology from rivals.
In order to farm seaweed, the company first has to cultivate spores in a laboratory, which are then placed on ropes in hatcheries.
Once the seaweed starts to grow, the lines are moved to the open ocean. Harvest takes place just a few months later.
"That's the beauty of it," he says.
"You don't need land, fresh water or fertiliser. That's why so many people are now seeing interesting opportunities in algae."

Lucy Watson, the development executive at Ireland's Seafood Development Agency, says that the country has "good sites [for farming seaweed], well informed industry players, and R&D capacity".
She adds: "There are no negative environmental impacts of farming seaweeds per se." 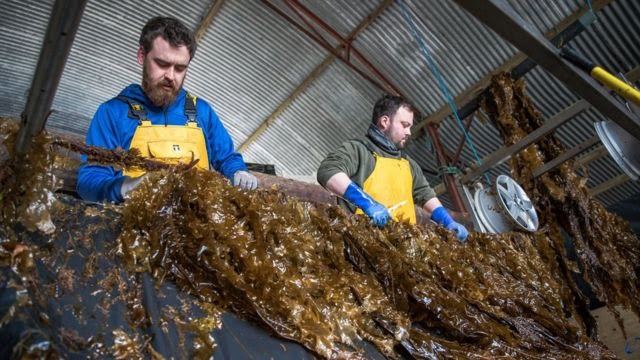 Others are not convinced, such as Marc-Philippe Buckhout from Seas At Risk.
The group is a coalition of more than 30 European environmental organisations working to protect Europe's seas and the wider oceans.
He fears that seaweed has become the new green hype, with potentially negative repercussions, such as crowding out other sea organisms.
"Large scale farms might be the industry's preferred way forward," he says, "but we would definitely favour smaller operations that are set in the sort of carrying capacity of the area that they're situated in."

Reinier Nauta, a specialist seaweed researcher at Wageningen University in the Netherlands, shares these concerns.
"One of the most important questions is the impact of algae cultivation on the nutrient balance of the sea," he explains.
He points out that farming seaweed at scale could result in a decline in phytoplankton, an important food for fish, and these fish are, in turn, then feeding seals and porpoises. 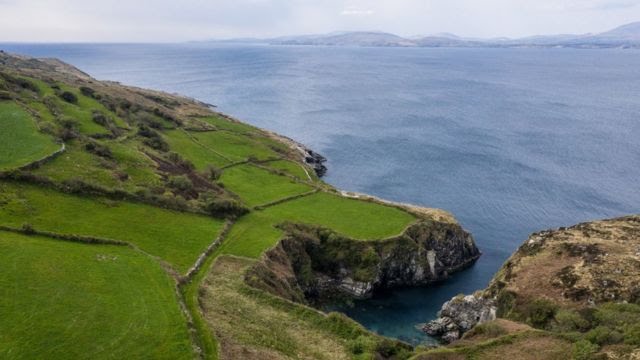 Image : Tristen Taylor
The Republic of Ireland has a coastline of more than 3,000km (1,864 miles), so lots of sea in which to explore the commercial farming of seaweed

North Sea Farmers' Eef Brouwers admits that in order to fully determine the environmental impact there will have to be much larger test farms.
"We need to get to a large scale first to be able to figure out what's going on," he says. A representation of what it will look like in 2030 © North Sea Farmers
Off Germany's Baltic Sea coast, Eva Strothotte a biologist from Kiel University of Applied Science is managing an EU-funded project to see if growing kelp at offshore wind farms is technically and economically viable.

The test site is 100km from the coast and subject to extreme weather.
Her team has had to develop specially toughened moorings for the lines, and set up an extensive array of sensors to monitor the seaweed's growth.
She says: "We talked to seaweed producing companies in Scotland and Norway, and they said 'you must be absolutely crazy, there's no way to grow seaweed in such a location', but if you can do it here then you can do it anywhere."
Back in Mulroy Bay, Mr Wouters admits he is concerned that the fast-growing industry could "attract people who don't care about nature, and don't want to grow with nature."