From traveling to space and going to the deepest point on Earth, the University of North Carolina at Chapel Hill professor has had a busy year.

From Newsweek by Jim Kitchen

I definitely inherited my wanderlust from my parents.
When I was a kid, they would take us from South Florida to Washington state in the back of our wood-paneled station wagon.
So, I've seen all of the continental United States.
Along the way, they took us to Cape Canaveral—and I have been a space enthusiast ever since.

It was always a dream of mine to go to space.
I wanted to be an astronaut.
But I went to college and there, I started my first company—a travel business.
We did big, group tours to the Caribbean.
Then, I began traveling the world with that tour operation business.

While running my travel business I visited 75 or so countries and that's when I really began to explore, learning so much about the world and myself.
This is when I transitioned from being a collector of passport stamps to being a "connector," meeting fascinating people all across the world.
I ended up visiting my 193rd country in 2019, which is the total number of UN-recognized countries in the world.

In March 2022, I had the privilege of being able to go to space aboard the Blue Origin shuttle mission, which fulfilled my lifelong dream.
I had been contacting Blue Origin for several years, trying to get on one of their space flights.
I must have contacted them about 20 times and finally heard from them in December, 2021.
They called and asked me if I'd like to be on the next flight and my knees literally buckled!
Prior to the launch, we flew to Van Horn, Texas for four days of intense training, familiarizing the crew about the launch day sequence, safety procedures, and practicing getting in and out of a seat during zero gravity. 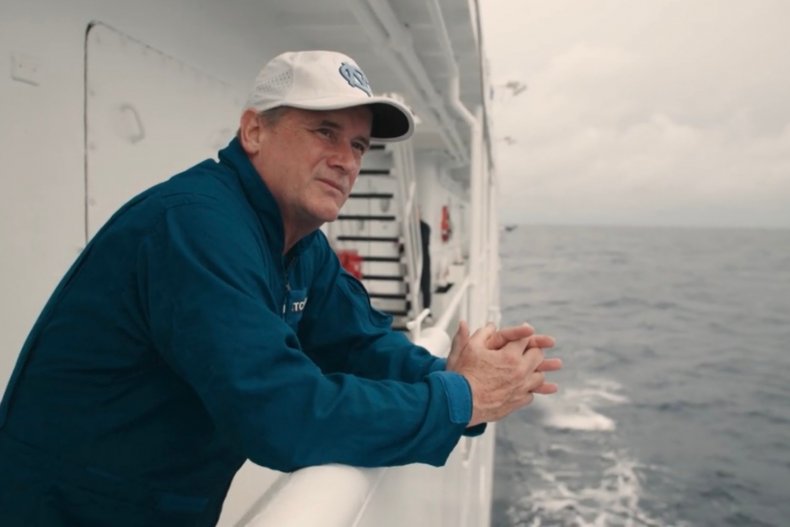 Jim Kitchen is a lifelong explorer.
In 2022 he traveled into space, and to the deepest known point of the Earth's seabed.
courtesy of Jim Kitchen
Going into space was incredible—it was an out-of-body experience.
Being 66 miles above the Earth, I was riveted by the blackness of the universe.

Then, in July 2022, I went down to Challenger Deep, the deepest known point of Earth's seabed, located around seven miles down in the Mariana Trench, in the western Pacific Ocean.
I had learned about the opportunity to go to the bottom of the ocean a few years ago, however with the COVID pandemic, I didn't feel like that was the right time for me to go.
Also, going to space was my primary focus.
The impetus for me going in 2022 was that the submarine was being sold and it was either go now or never.
There was no debate.
I have worked hard my entire life as an entrepreneur.
It was worth every penny.

Challenger Deep consists of the eastern, central and western pools.
Myself and my pilot, Tim McDonald went to the eastern part of the eastern pool, to a place that had not been explored before, reaching a depth of somewhere between 10,925 and 10,935 meters (35,843ft and 35,875ft).
It was utterly amazing.

The goal for me personally was just to explore the very bottom of the ocean.
I didn't do any scientific research ahead of the trip, however there were scientists on board the boat our submarine descended from, mapping the seafloor.
And, we visited a location that, as far as we know, no human had yet traveled in the Mariana Trench.

The trench lies around 210 nautical miles to the southwest of Guam, and we headed out from Guam aboard the DSSV Pressure Drop.
Just before the dive I was mostly confident, although in the back of my mind, of course, I was somewhat concerned about what could go wrong.
As I had been before going to space, I thought about my friends and family, and reflected on how incredibly fortunate I've been to have had these experiences. 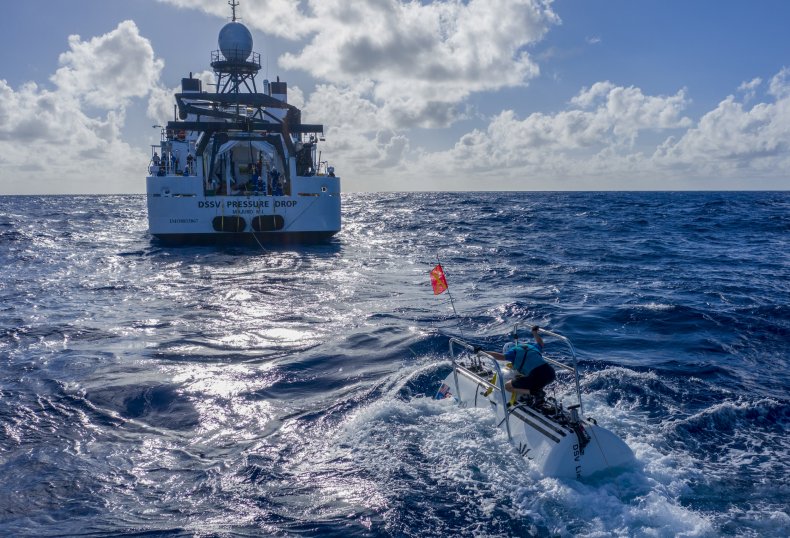 The DSSV Pressure Drop took Jim Kitchen to the point in the ocean where he would descend the depths of the Mariana Trench.
courtesy of Jim Kitchen
At around 8 a.m. on July 5, we got into a submarine and went down.
It took about four hours to descend to the bottom and on the way down, I just had this intense anticipation of what we were going to see.
You don't really know.
There are maps of what the topography of the bottom of the ocean there looks like, but there have been several occasions where the maps don't resemble what is actually there.
So we had no idea what we were going to see.
The aim was to map areas, get high resolution video and put human eyes on unseen places.

When we got to the bottom, it was pretty clear from the beginning that we were in store for something because the sonar readings on the sub were spectacular.
In fact, the eyes of my pilot lit up.
I said, "What do you see?" And he responded, "I've never seen a reading quite like this before."

Just 10 minutes or so from where we landed were spectacular areas where you could see the Pacific tectonic plate actually going under the Philippine Plate.
We were actually witnessing where the two plates are colliding and all of the resulting rubble from that process.

We also saw some incredible life.
We actually collected a number of amphipods that are like little shrimp—they are fantastic.
Think about it, they have no light, they're in almost freezing temperatures, there's no oxygen, there's the crushing pressure.
But these creatures thrive down there.

In addition, we saw some sea cucumbers, which looked like transparent, floating blobs of mucus.
They float around you and you're thinking, "What is that thing?"
They look like alien lifeforms.

But for me, the most mind-boggling thing was seeing these bacterial mats.
In the light from the submarine, they looked like pieces of gold across a two or three square meter area.
But they are not photosynthetic—there's no light and barely any oxygen down there.
It was like being on a Mars rover.
If life exists on Jupiter's moons or other planets, my guess is that it's likely going to be like what we saw in the Mariana Trench.
To be able to see that sea life first hand was amazing. 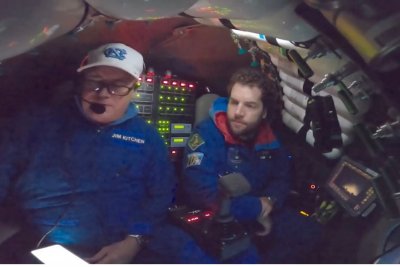 Jim Kitchen and his pilot Tim McDonald in the submarine they used to travel to Challenger Deep, the deepest known point of the Mariana Trench, and the ocean. 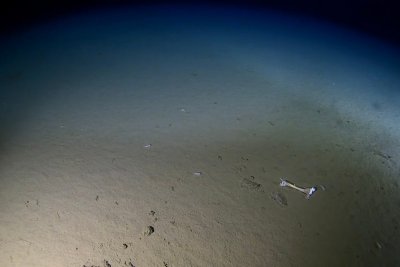 Views from the submarine Jim Kitchen was aboard during his trip to the bottom of the Mariana Trench, the ocean's deepest known point.
At seven miles below sea level, with billions of gallons of water overhead, the pressure was 16,000 pounds per square inch.
So obviously, if something happened where the titanium sphere of the sub was breached it would be instantly catastrophic.
But, the biggest danger is getting entangled and being stuck down on the bottom with only 96 hours of emergency oxygen.

We remained at the bottom of Challenger Deep for about two-and-half hours and I think the hairiest moment was getting to the bottom and the pilot saying, "What's that error message on the screen?"
When the pilot needed to release some weights in order to become more buoyant and he flipped a switch but it didn't work, I thought, "Oh my gosh, are we going to get stuck." But luckily there was a backup, so he flipped another switch and it disengaged.

Overall, everything went as planned.
And the reality is, the sub has been down to full ocean depth before, so I was pretty confident that it would withstand the pressure.
But I was surprised that I didn't experience any unusual physical sensations inside the sub.
It's a fully pressurized cabin so my ears didn't pop or anything like that.

I was one of less than 30 people to have made that trip.
So few people have ever been down to see the bottom of the Mariana Trench because it's just so difficult to reach.
More people have been to the moon, and that's quite a feat.
It's pretty remarkable.

There are eight billion people on this planet.
We have inhabited every square inch of land.
We think we're so fabulous.
Yet 70 percent of our Earth is ocean and so little of it has been mapped or explored.
I am also a professor, and my message has always been to my students that anything is possible—to push through boundaries and keep their dreams alive.
Hopefully, I can inspire them.

This experience was equivalent to going to space, so I would absolutely jump at the chance to go again.
For me personally, to see the deepest point of the ocean was a dream come true.
Links :
Posted by geogarage at 1:46 AM