Theories of giant waves that suddenly appear and vanish

Maritime folklore tells stories of giant waves that suddenly appear on the ocean and disappear just as quickly.
While many people dismiss the existence of such waves as mythology, there are accounts of oil rigs and ships having encountered giant waves and giant troughs that suddenly appear and disappear.
There are theories that seek to explain such occurrences that could occur more frequently as a result of climate change.

During December 1942, the Queen Mary sailed westbound into a storm on the North Atlantic carrying almost 11,400 American soldiers and pushing through swells of 50 to 60-feet in height.
It suddenly encountered a super trough and hit broadside by a giant wave estimated at 90-feet height.
The ship heeled over to 52-degrees and within 3-degrees of its limit before slowly righting itself.
During early 1960’s, the Union-Castle Line’s Pendennis Castle sailed from Durban to Cape Town when it fell into “a hole in the ocean,” causing the ship to heel over to 45-degrees, its limit.

Fortunately, the Pendennis Castle was able to right itself.
During July 1909, the 10,000-ton SS Waratah carrying 211-people suddenly disappeared without trace while sailing from Durban to Cape Town.
It was discovery during 1999 resting upright on the seafloor, indicating that it had sunk very rapidly and possibly the result of having encountered a giant wave.
During February 1982, huge waves estimated to exceed 65-feet pounded the semi-submersible oil rig named Ocean Ranger and caused it to sink offshore from Newfoundland, Canada.
During December 2008, a giant wave hit the Dunbar oil rig in the North Sea. 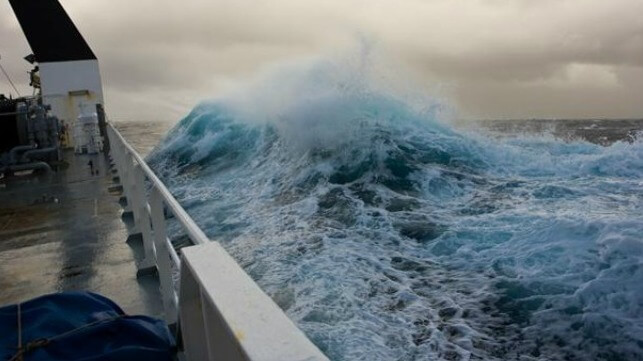 Shallow bodies of water such as Lake Erie, North Sea and Bay of Biscay are notorious for storm driven wave conditions.
The Mid-Atlantic Ridge provides a shallow zone along the shipping route between North America and Europe with potential to cause large waves as winter approaches each year.
At such time and as a result of a combination of rarely occurring factors, steadily increasing wind speed along the American east coast has potential to produce waves that could coalesce and break at mid-ocean above the Mid-Atlantic Ridge, such as the wave that Queen Mary encountered.

The seafloor topography under several bodies of ocean provides locations where large offshore waves are likely to occur.
While the southern region of the Bay of Biscay reaches depths in excess of 9,000-feet, depths in the northern region are less than 300-feet providing a 30-to-1 ratio.
That seafloor profile extends westward into the Atlantic Ocean and across the international shipping channel located west of Portugal and Spain where over the distance of a few miles, water depth changes from more than 9,000-feet to less than 600-feet.
The international shipping lanes that connect to Western Europe pass through this region.

Winds blow across vast expanses of the North Atlantic producing waves that enter this region where wave height increases.
Waves moving south from the Norwegian Sea into the North Sea also encounter a sudden change in water depth between Scotland and southern Norway, where large waves have a propensity to occur.
Water depth off the South African coast between Durban Port Elizabeth rapidly decreases toward shore over a comparatively short distance and especially offshore from East London where a shallow zone extends further into the Indian Ocean and where large waves frequently occur.

Climate change has the propensity to increase storm severity in many coastal regions internationally.
More powerful winds blowing at steadily increasing speed over large expanses of ocean would produce larger and faster moving waves that are more likely to be affected by deeper level seafloor topography.
The result would be an increased likelihood of successive waves coalescing into the occasional supersize wave that would break far offshore in regions where sea depth rapidly decreases.
There are several locations in the world’s ocean where water depth decreases offshore from over 10,000-feet to under 600-feet, where super waves are likely to occur.

It is perhaps a forgone conclusion that ships will encounter storms at sea and on rare occasions during such storms, a wave of extreme height.
In the history of shipping, ships have encountered rogue waves and survived as was the case for the Queen Mary and the Pendennis Castle that were both larger than the ill-fated Waratah.
As future international trade increases, greater numbers of large ships will sail across the ocean and through regions where the seafloor rapidly changes height in mid-ocean.
There will likely be increased future reports of ships having encountered sudden large waves at mid-ocean.
Links :
Posted by geogarage at 1:32 AM