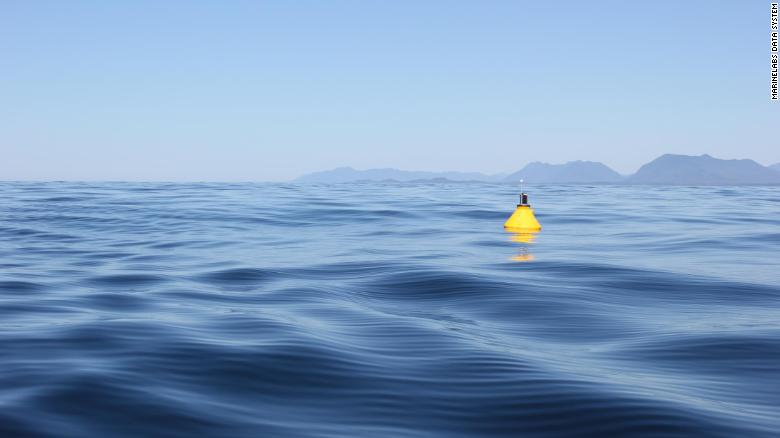 The MarineLabs sensor buoy which detected the record-breaking rogue wave off of Ucluelet, British Columbia.
From CNN by Caitlin Kaiser and Tom Sater

(CNN)A rogue wave measuring 58 feet (17.6 meters) tall was recorded off the coast of Vancouver Island, breaking the record for proportionality at three times the size of surrounding waves.

"Only a few rogue waves in high sea states have been observed directly, and nothing of this magnitude.
The probability of such an event occurring is one in 1,300 years," said Johannes Gemmrich, one of the lead researchers on rogue waves at the University of Victoria.
The wave made a splash in the scientific community for being proportionally the most extreme rogue wave ever recorded.
Although it occurred in November 2020, the study confirming it was just released February 2 of this year.

A rogue wave is exactly how it sounds: unexpected and terrifying.

"They look like a large four-story lump sticking out of the water with a large peak and big troughs before it," Scott Beatty, CEO of MarineLabs, the company operating the buoy which measured the wave, told CNN.
In the past few decades, what was once known as marine folklore has now been accepted as real by scientists.
"Rogues, called 'extreme storm waves' by scientists, are those waves which are greater than twice the size of surrounding waves, are very unpredictable, and often come unexpectedly from directions other than prevailing wind and waves," the National Oceanic and Atmospheric Administration (NOAA) explained. 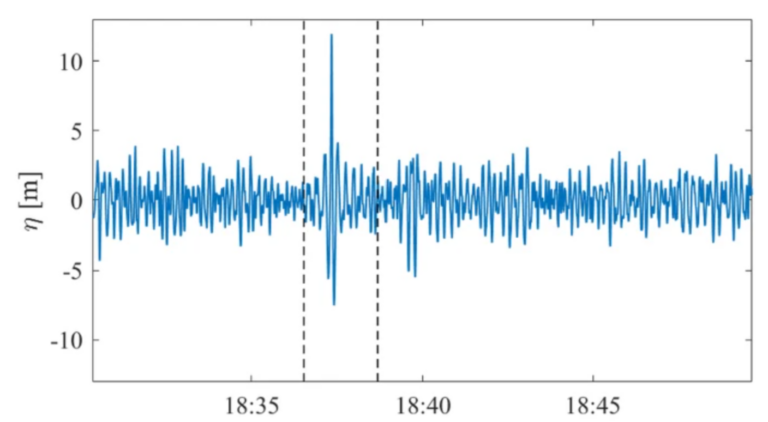 The MarineLabs rogue wave had a ratio of maximum height to significant wave height (Hmax/Hs) of 2.9, the highest ratio recorded to date.
The surface elevation signal was measured in two independent ways: a GPS based method and an IMU based method.
The conservative (smaller) Hmax of 17.6m was used for the study.
see Marine Labs
In simplified terms, "A rogue wave is actually just a wave that is large compared to the surrounding wave field," Gemmrich clarified.

Overall size doesn't matter, but the comparison in size to other waves does.
Thus, while a wave achieving a four-story height equivalent is impressive, its magnitude being three times that of its surrounding waves is what landed it in the record books.
The first rogue wave recorded, known as "The Draupner Wave," was measured in 1995 off the coast of Norway at 84 feet (25.6 meters) with surrounding waves of approximately 40 feet (12 meters), making the original rogue wave about twice the size of those around it.

The record-breaking rogue wave recorded in November 2020 measured at almost 58 feet (17.6 meters) in comparison to surrounding waves of around 20 feet (6 meters), blowing the original proportions out of the water.

The wave was measured via a MarineLabs buoy about 4.3 miles off the coast of Ucluelet,
Vancouver Island, British Columbia
see Station 46206 La Pérouse Bank
Recording these "killer waves" is no easy feat
The rogue wave in the study was measured via a MarineLabs buoy approximately 4.3 miles (7 kilometers) off of the coast of Ucluelet, British Columbia.

"We're a real-time intelligence company, and we provide real-time updates on what is going on along the coastline, including wind, waves, and other data," Beatty explained.
The company produced a video simulation of the buoy around the time the rogue wave came through, showing the swell in comparison to the smaller surrounding waves.

see YouTube
The problem lies in how to continuously track rogue waves once identified by a sensor.
"Most observations are at a single buoy, a single location, and so the wave passes through, and we know at this moment it was this high, but we don't know how long.
That is the big science question," Gemmrich noted.

One thing is known for sure: Rogue waves are not afraid to rock the boat.

Such waves can pose a significant threat to marine operations as well as the public due to their immense power and lack of predictability, Beatty stressed.

"They are unexpected, so the vessel operator has little warning.
If it is high enough that it can cause some damage to the vessel, the operator has no time to change course or react to it." Gemmrich added.

One common misconception Gemmrich wanted to emphasize is rogue waves are not to be mistaken for tsunamis.
Although both are known for being large waves, the way they come about is completely different.
"Rogue waves are generated by wind, so they are just a rare occurrence of wind generated waves.
Whereas a tsunami is generated most commonly by an earthquake, underwater earthquake, or as we've seen recently a volcano eruption," Gemmrich stated.

Coastal communities everywhere are vulnerable to rogue waves.
According to Gemmrich, anywhere exposed to water could experience a rogue wave, though places with strong currents may be more likely to see them.
As for Vancouver Island, there was no reported damage from the rogue wave, as it occurred too far offshore.
However, they can present onshore danger if they originate closer to the coast.

To ensure better safety in the future, the scientific community is pushing for better research and forecasting to help prevent any damage to maritime operations or the public.
Jennie Lyons at NOAA pointed out there are specialized distinctions for rogue waves.
A "sneaker wave" typically describes a rogue wave condition along the beach because it sneaks up on you.
Rogue waves out over open water much larger than those around it, are often called "freak" waves.
And rogue waves large enough to damage a ship or cause a ship to roll more than normal are called "killer waves," because if they are severe enough, the damage could capsize a ship, potentially killing people.
MarineLabs has a system of 26 buoys placed strategically in the oceans surrounding North America with hopes to more than double their number by the end of 2022.

"We are aiming to improve safety and decision-making for marine operations and coastal communities through widespread measurement of the world's coastlines," Beatty stated.
Links :
Posted by geogarage at 1:33 AM