Enormous 'rogue waves' can appear out of nowhere. Math is revealing their secrets. 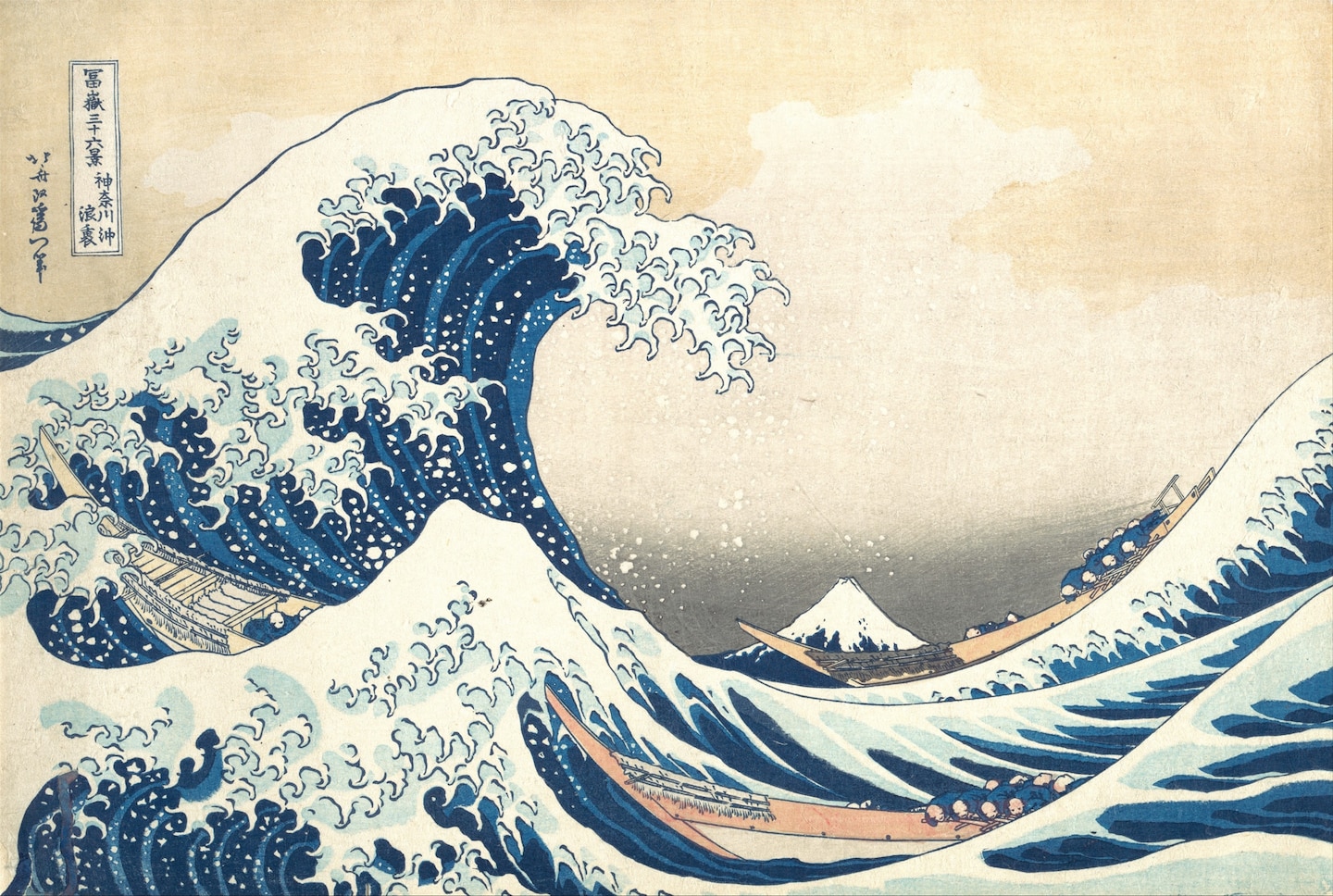 Katsushika Hokusai's iconic woodblock print, Under the Wave off Kanagawa, depicts a large wave many often misidentify as a tsunami.
The large off-shore wave depicted is more likely a rogue wave.
Katsushika Hokusai, The Metropolitan Museum Of Art
From National Geographic by Ally Hirschlag

Once considered a maritime myth, these towering waves can pose serious risks to ships in the open sea.
Now scientists are developing ways to predict them before they strike.

In 1826 Captain Jules Dumont d’Urville, a French scientist and naval officer, was caught in a turbulent storm while crossing the Indian Ocean.
He watched as a wall of water rose some 100 feet above his ship, the Astrolabe.
It was one of several waves more than 80 feet tall that he recorded during the wild storm.
One of his crew was lost to the sea.
Yet after Dumont d’Urville made it back to land, his story, backed by three witnesses, seemed so outlandish that it was dismissed as fantasy.

Scientists at the time believed waves could only reach about 30 feet tall, so the handful of 19th century reports of massive waves rising in the open ocean were largely written off as maritime myths.
Only later would scientists realize that the accounts were rare because many mariners who experienced these so-called rogue waves didn't survive to tell the tale.

Jules Dumont D'Urville's ships, the Astrolabe and Zelee, drawn and lithographed by Louis Le Breton in 1840.
The scene depicts a voyage between 1837 and 1840 to investigate the perimeter of Antarctica.
On a previous expedition about a decade earlier, Dumont D'Urville encountered what he described as a 100-foot wave in the Indian Ocean.
Smith Archive, Alamy Stock Photo 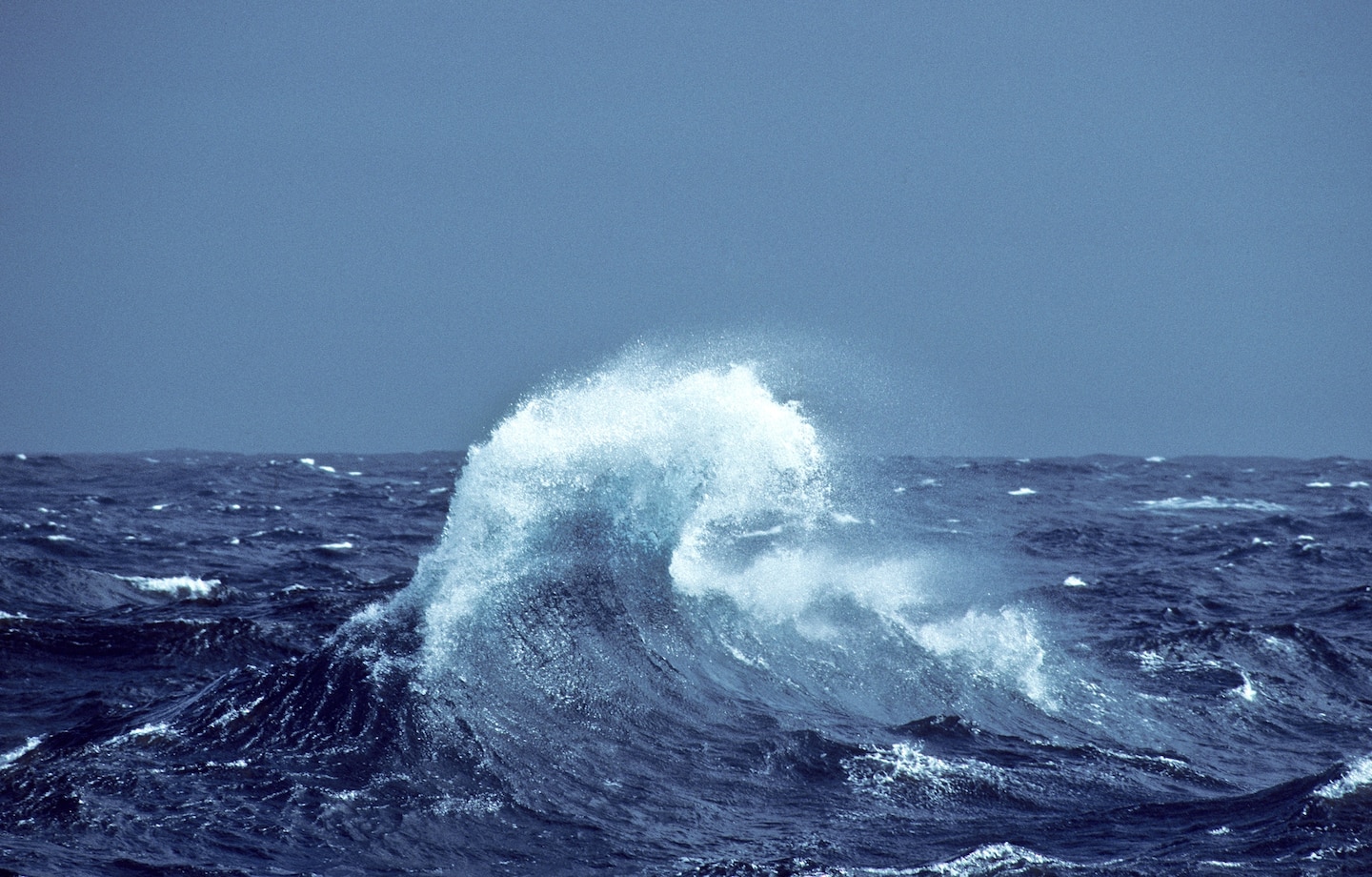 Photograph of a breaking rogue wave in the Southern Ocean taken from the French icebreaker Astrolabe, named after Dumont d'Urville's historic ship, during one of its regular voyages between Hobart, Tasmania, Australia, and the Dumont d'Urville Station in Antarctica.
The shape is remarkably similar to that depicted by Hokusai in Under the Wave off Kanagawa.
Photograph by Veronique Sarano
Today a rogue wave is defined as one that is more than twice as tall as the waves around it.
These giant swells can appear suddenly and seemingly out of nowhere.
With steep sides and a deep trough below, they resemble a wall of water rising out of the sea.
They can occur during storms with choppy seas but have also been reported in calm waters, which is one reason they’re so difficult to predict.

Scientists have recognized rogue waves as real phenomena since the mid-1990s—but keeping sea travelers safe from them is still a major challenge.
Though they are relatively rare, rogue waves can cause severe damage and loss of life if they hit a ship in the open sea.
In the vastness of the ocean, the interaction of the many forces leading to rogue waves can be difficult to untangle.
More recently, mathematicians have been combining real-world data collected from monitoring buoys with statistical models to understand what causes these gargantuan waves to form.
Their work offers hope that we may even be able to predict rogue waves before they strike. This image reveals the morphology of a rogue wave recreated in the lab at the FloWave Ocean Energy Research Facility at the University of Edinburgh in Scotland.
Photograph By Dr Donald Noble, University Of Edinburg, and Dr Mark Mcallister, University Of Oxford
How waves can grow

As shipbuilding technologies advanced in the 20th century, the number of surviving witnesses to rogue waves grew.
In April 1966 an Italian cruise ship called the Michelangelo met with an 80-foot wave that rose high above the storm-driven waves around it.
The ship sustained significant damage and three people were drowned, but most who were on board made it safely back to shore.

The crew aboard the MS München, a German container ship, weren’t so lucky.
In December 1978 the ship left the German port city of Bremerhaven for Savannah, Georgia, packed with steel cargo and a crew of 28.
After reporting bad weather and sending out distress signals in the early morning hours of December 13, the ship and everyone on it disappeared.
A lifeboat that had been attached to the ship about 65 feet above the water was recovered, but it appeared to have been ripped from its post, likely by a towering wave at least that high.

Scientific doubts about these mysterious, giant waves were not completely dispelled until 1995, when a rogue wave hit the Draupner oil rig, a natural gas platform in the North Sea off the coast of Norway.
The wave’s peak, measured by a laser detector on the rig’s scaffolding, rose 85 feet above the surface. 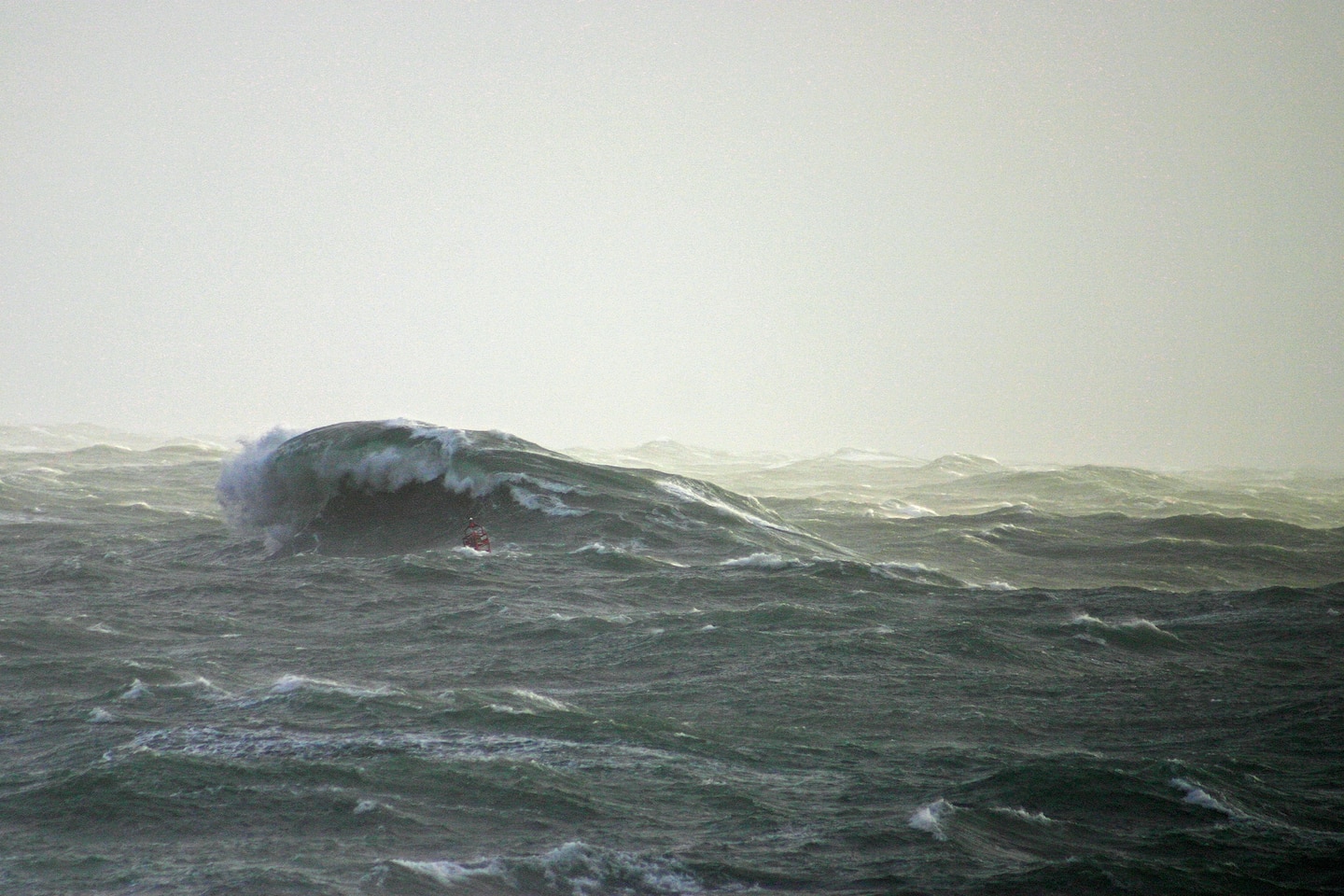 A monitoring buoy operated by Canadian research company MarineLabs is seen in rough waters, approximately three miles from the site off the coast of British Columbia where another MarineLabs sensor buoy measured an extreme rogue wave in 2020.
Photograph by Mary & Ed Goski
Scientists have since figured out that unlike tsunamis, which are large waves produced by a sudden displacement of water from an event such as an earthquake or landslide, rogue waves form due to a chance combination of wave movements through the ocean.

One reason for the uncertainty is that rogue waves are rare.
Even now, there’s a dearth of quality tracking data.

“Generally ocean rogue waves are measured from platform measurements or buoys, which record time-measurements at a specific location without any knowledge of what happened before or will happen further,” says Amin Chabchoub, a wave physicist at the University of Sydney in Australia.
A 2019 study led by Chabchoub evaluated several rogue wave observations and models, and the team concluded that the inciting rogue wave mechanism can change depending on the varying factors in the sea at a given time, known as the sea state.

To compensate for limited observations of rogue waves, scientists rely on wave tanks.
“Recreations in a laboratory mimic almost one-to-one what happens on the ocean surface,” Chabchoub says.
These experiments can even account for currents and winds, although the controlled settings have their own limitations.

When water is trapped in a narrow channel such as a wave tank, it’s much easier for large waves to form and to be observed.
However, these experiments represent an “unrealistic scenario” because waves cannot spread in all directions as they would at sea, says Francesco Fedele, an ocean engineer at the Georgia Institute of Technology.

The National Oceanic and Atmospheric Administration is developing a system that can forecast potentially hazardous areas of the ocean every hour using a program called WAVEWATCH III. The latest version, released in 2019, uses a probability formula that Fedele developed in 2012 to predict extreme conditions in the ocean at a specific place and time.
It’s a useful tool to help mariners steer clear of dangerous seas, but it may not be enough to protect them from a rogue wave that appears out of the blue.

Johannes Gemmrich, a research scientist at the University of Victoria in Canada who analyzed the 2020 rogue wave near Vancouver Island, says rogue waves are most often generated when waves travel at different speeds and occasionally overlap, supporting the linear addition model.
But he believes wave asymmetry—when waves have higher peaks and lower troughs—plays a crucial role as well.
“If we allow for stronger asymmetry, the probability of extreme rogue waves increases drastically,” Gemmrich says.
A general formula for the sea

One school of mathematicians says it doesn’t matter what causes a rogue wave, because one can still predict rogue waves quite accurately using a statistical framework for rare occurrences called large deviation theory.

The idea behind this method is to model the most efficient way a rogue wave can form, then use that model to chart a particular rogue wave’s path of development.
The theory can factor in linear and nonlinear effects depending on the scenario, which is why its proponents consider it a unifying theory—one that could perhaps be used to predict rogue waves in various ocean conditions.

“If you just look at the absolute most efficient way of forming these waves, it very nicely agrees with the actual observed ones,” says Tobias Grafke, a mathematician at the University of Warwick in the United Kingdom.

Grafke and a team of researchers tested this theory in wave channels, measured results against real-time wave observations, and found the method could predict rogue waves in both settings surprisingly well.

One problem with this framework, however, is that it’s extremely challenging to account for all the factors of a sea state at a specific point in time.
If you’re the captain of a ship, the most helpful forecasting information would be derived from real-time observations, not statistical probabilities.
Grafke says his team’s formula can account for the specifics of a given sea state, but the more variables you fold in, the harder it becomes to solve quickly.

“The more complex these [equations] are, the better the prediction, the higher the computation effort and time,” Chabchoub says.
“It is therefore a trade-off between accuracy and time to obtain useful results.”
Real-time forecasting

Scientists have been moving toward real-time wave prediction technology, but the newer approaches need to be tested in real-life settings—a challenge given the rarity of rogue waves.
In many cases, the computation process needs to be ramped up to match the speed of the waves.

Rogue waves can form in just “10 to 15 seconds in rough seas,” Fedele says.
“It is still hard to make fast and accurate predictions in such a brief time interval.”

To predict a rogue wave, scientists would need a radar system to continuously measure waves near a boat, so they could run data through a mathematical model that paints a picture of the ocean’s surface at that moment.
A model that calculates a new surface every five minutes would offer a relatively accurate prediction of how waves would evolve in the next several minutes.

Such a system is not a reality yet.
“The technology is there. The question now is: How [do] you make it fast?” Fedele says.

As more rogue waves are measured, mathematicians may finally find a way to anticipate these deadly waves before they rise out of the ocean—a technology that Captain Dumont d’Urville could have only dreamed of back in 1826.
Links :
Posted by geogarage at 1:54 AM