A moment that changed me: water flowed into our boat – and my parents were at a total loss 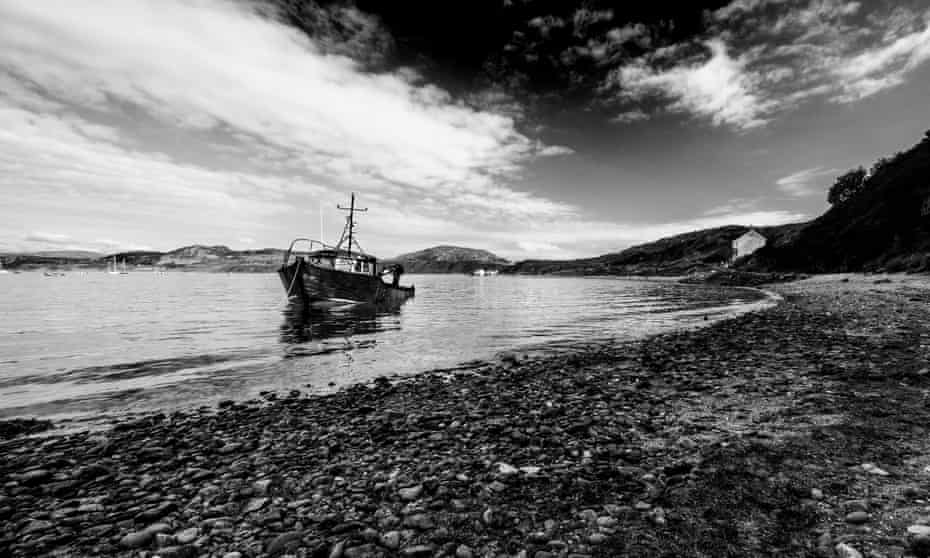 ‘I remember wet summer days, and grey, misty Easters, the sea somewhere between granite and slate.’ Photograph: Tim Merrick/Alamy
From The Guardian by Nick Blackburn

On an ordinary trip out in my father’s boat, we began taking in water.
For once my mother could not comfort me and it felt as if life’s invisible chaos had become clear

It wasn’t something you would think of as particularly grand – a white boat, the shape of an iron with a stripe down it, maybe a foot or two larger than an estate car.
Named after my mother, it lived in a sort of car park for boats, where it rested high up on a trailer and a tractor would come to take it to the shore.
A couple of checks were performed – the battery, maybe; something around the engine; a rubber bung that went in the drain in the back of the boat to stop water coming in.
My parents didn’t often go out on the water together; perhaps the day I’m remembering was why.

The boat was my father’s thing, really.
He came from a family who built planes, raced motorcycles and sailed ships.
At one point, before a fast house move consigned them to a yellow skip, our garage had the kinds of tools to maintain a yacht with: clonky wooden planes and sharp-angled items for working metal.
Honestly, I don’t know what these things were for: they seemed ageless to me when I was a child, and full of purpose – the implements that carved Stonehenge.

I remember being on the boat as one of the only times in my life when I spent significant amounts of time alone with my father – wet summers mostly, or grey, misty Easters when it was flat enough to go out, the sea somewhere between granite and slate.
Now that he’s dead, it’s those afternoons I suppose I imagine replaying with my father until we arrived at a form of connection; sifting them for a closeness I know is wishful thinking.

Usually, my father read the paper, or one of his car magazines, while I fished with a lead weight and a line with feathered hooks: there were electric moments where a shoal of mackerel passed and we would land them by the half-dozen – all wasted.
My mother distrusted things that had come straight out of the sea in that bay; I suppose she was thinking of storm surges and sewage outlet pipes.

The three of us would not have done anything out of the ordinary that day: a trip out to the two small islands, their lighthouse and seal colony.
I remember it being overcast and the water fairly calm, no signs of anything sinister.
But in the centre of the boat near the front there was an oblong, carpeted hatch covering a storage space maybe a foot deep.
When we lifted it up, the space beneath was full of seawater.

Floating boatless in water of that temperature is not deadly: all of us could have swum if we had needed to.
There were lifejackets and ample time to radio for help.
The only sharks of any size you find visiting that bay are basking sharks – vast placid cruisers occasionally sighted round the headland in summer.
The worst risk might have been jellyfish stings, but – horrifying as they were to me as a child – these posed no real threat to our safety.
In fact, as a therapist now, there is a sort of flexibility in this image that I might want to encourage in my patients: yes, floating; why not give in to it, be held up by something bigger than yourself.

The horror for me at the time, though, was twofold.
I don’t remember the specifics, but there must have been a point at which I witnessed my parents at a total loss.
Then, too, the awful realisation that the outside was now on the inside – the water flowing slowly but surely into the boat; that there would come a point at which there was no firm surface any more; there would be new rules.
After my father died, I think I started watching videos of the Chernobyl nuclear disaster for similar reasons: the boundaries of the world suddenly reordering themselves, the invisible chaos of things made dreadfully clear.

The other frightening thing about this moment for me as a child was that I was used to my mother being the one who brought order to my world.
My father was what at that time was called a manic depressive; though good at his job, he rarely spoke and did not excel at parenting.
My mother was now out of her comfort zone: here we were in his territory, the restless sea.
My father turned the key in the engine, which responded.
He slammed on the accelerator, forcing the water out through the hole where the bung ought to have been, and we made it to shore.

You still will not catch me swimming in deep water, and, for many years I stayed away from anything smaller than a ferry.
So it took me by surprise, a few years ago, how much I enjoyed going out on a similar boat as part of a birthday present.
Old enough now to be my younger self’s father, I want to go back to the sea.