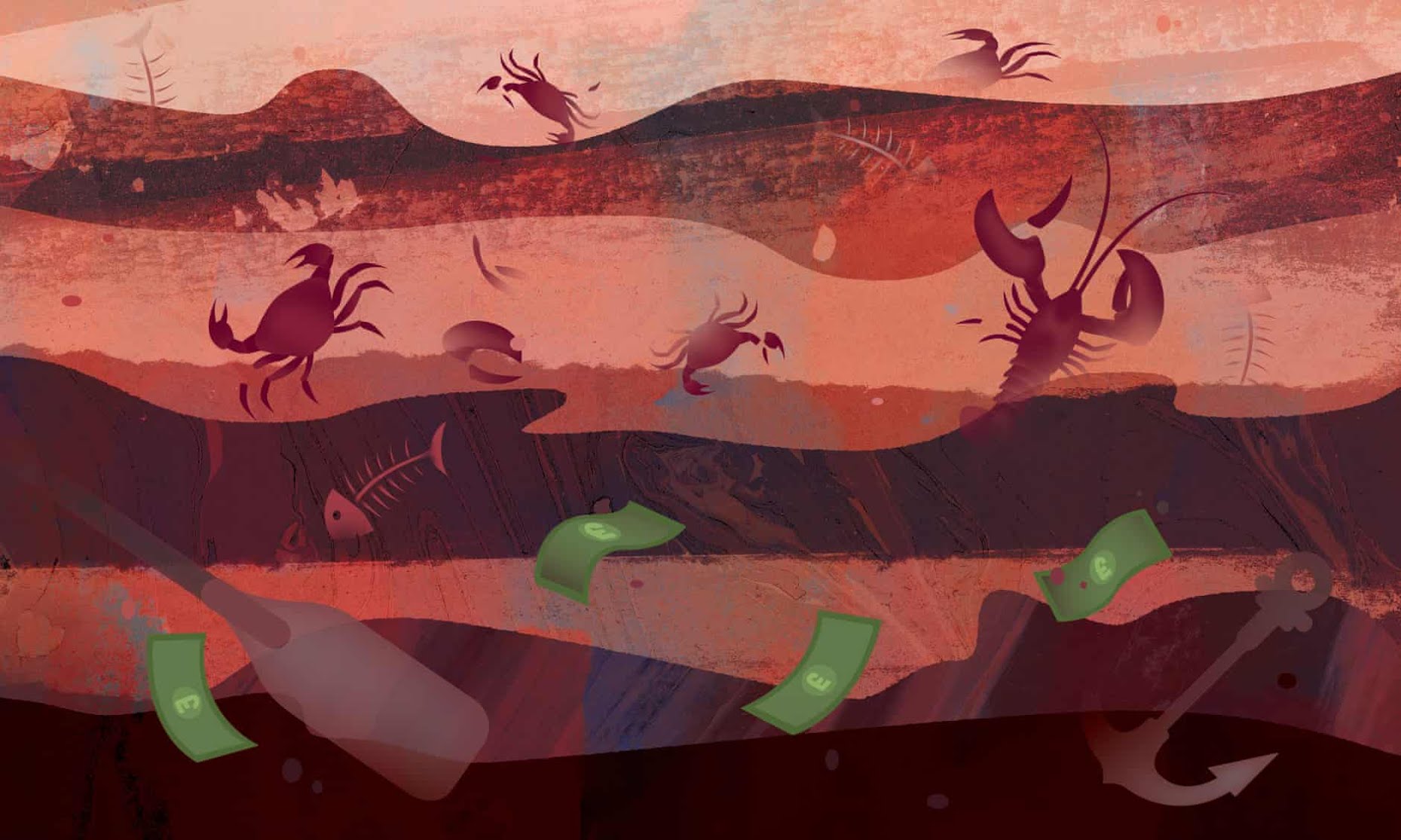 Illustration: Thomas Pullin/The Guardian
From The Guardian by George Monbiot
Environmentalists fear a toxic disaster is occurring on the seabed, and government denials seem less and less plausible

With every passing week, it looks more like a cover-up.
The repeated mass strandings of crabs and lobsters on the coast of north-east England, and the ever less plausible explanations provided by the government, are the outward signs of an undersea disaster and a grim new politics.

Last October, beaches around the Tees estuary and along the coast of North Yorkshire were suddenly covered in dead and dying crabs and lobsters.
The government launched what it called an “investigation”.
In January, hundreds of dogs reportedly fell ill after being walked on the same beaches.
In February, a government press release announced that the mass death of sea creatures was caused by an “algal bloom” – a rapid increase in the population of algae that can release toxins into the water and affect other wildlife.Record low wild salmon catch in Scotland alarms ecologists

No report was published, no data, no evidence of any kind.
An algal bloom in October seems highly unlikely in north-east England, as such blooms require high temperatures and clear water: the sea at the time was almost certainly too cold and turbid.
No bloom had been noticed by the fishing community or any other water users. 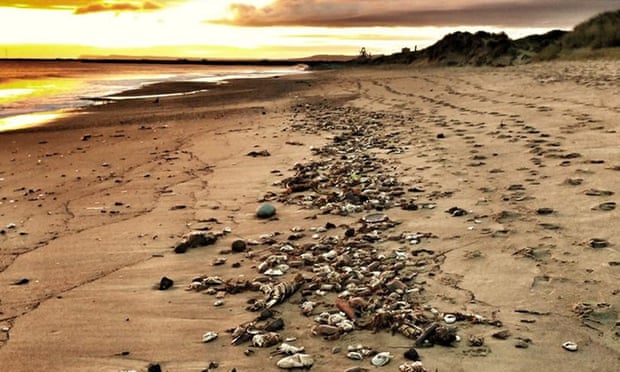 Dead crabs on the beach at Seaton Carew.
Photograph: Paul Grainger/PA
Soon after the press release was published, another mass death of crabs and lobsters was reported on the same coastline.
While an algal bloom in October is implausible, an algal bloom in February is impossible.
The government reopened its investigation, but promptly shut it down again, on the extraordinary grounds that a few healthy crabs and lobsters had been caught.
Nothing to see here.

Last month, there was another mass stranding of crabs and lobsters on the same beaches.
Divers reported that the seabed immediately south of the River Tees was a “dead zone”: even the seaweed was dying.

The government has still not published its evidence.
When I asked, it refused to send it to me.
It was unable to produce a convincing explanation for this refusal.
So we have no means of determining whether its methodology was robust, whether its data gathering, management and analysis was sound, or whether its conclusions reflected its results.
Transparency is a basic scientific principle: if it’s not published, it’s not science.

A coalition of local commercial fishers and anglers raised the money for an independent investigation by the marine pollution consultant Tim Deere-Jones.
He made a series of freedom of information requests, which revealed that the government’s only evidence for an algal bloom consisted of satellite images.
But such images, without corroboration by water sampling, can be misleading: plumes of sediment can give similar results.
Astonishingly, although there is no evidence that it conducted such sampling, the government concluded not only that a bloom had occurred, but that it was caused by a particular, toxic species: Karenia mikimotoi.
This is the stuff of science fiction.
Karenia thrives in temperatures between 20 and 24C.
The average water temperature on this coast in October is 13C.
There is no plausible mechanism by which a Karenia bloom could cause the mass death of lobsters and crabs without also killing large numbers of fish, sea urchins and many other species.

The freedom of information requests revealed something else: that the levels of a pollutant called pyridine in the north-eastern crabs the government tested were up to 74 times higher than those found in crabs caught in Cornwall.
Pyridine is highly toxic to aquatic life.
Despite this finding, the government press release claimed it has “ruled out chemical pollution as a likely cause”.
It says that “pyridine was not present in water and surface sediment samples collected off the Tees”.
Until we see the evidence, we have no means of knowing when, where and how such samples were taken, or how were they assessed.

Environmental Disaster, North East England Coast
Thousands of dead and dying sea creatures have washed up on the shore.
Pyridine is a waste product of heavy industry, and is also manufactured as a base for insecticides and marine biocides.
Several of the industries once located on the Tees estuary are likely to have produced it.
Deere-Jones found that there were very high levels of pyridine derivatives in sediments in the estuary.
A dredger started work in the mouth of the Tees at the end of September, deepening the channel.
Deere-Jones’s hypothesis is that the dredger inadvertently exposed contaminated mud.
This was then dumped at the legal disposal sites farther offshore.
The currents flowing southwards, he believes, spread these sediments down the coast.
As pyridine attaches itself to particles that fall to the seabed, and accumulates up the food chain, it is likely disproportionately to affect bottom-living scavengers such as lobsters and crabs.

The government’s insistence that chemical pollution was not responsible might seem hard to understand.
But consider this.
In July, work begins on the Teesside freeport, the biggest and most spectacular of the government’s fabled “Brexit opportunities”.
The project is being overseen by the Conservatives’ favourite mayor, Ben Houchen.

Constructing the Tees freeport will require a massive dredging operation.
To enable ships to dock at the new South Bank Quay in the Tees estuary, a crucial component of the freeport, the channel needs to be deepened from 9m to 13m, and the “berth pocket”, where the vessels moor, to almost 16m.
This means excavating historic sediments that are likely to contain the chemical legacy of Teesside’s old industries.
Questions have been raised about whether these sediments have been properly tested before dredging begins.
If they turn out to be highly contaminated, the expense of removing them safely could be prohibitive.

Freeports have been a magnet for money-laundering, tax evasion, corruption, smuggling, counterfeiting, drug trafficking and terrorist money flows.
Just before the government launched its consultation proposing 10 freeports in the United Kingdom, Brussels announced that it was clamping down on freeports in the European Union.
This helps the UK to consolidate its position as the world’s financial entrepot for organised crime, now a major sector of our economy.
In conjunction with the City of London, which acts as a global hub for tax havens, the flow of criminal money into our property market and the complete collapse of the prevention of fraud and the regulation of waste dumping (a traditional preserve of the mafia in poorly regulated economies), freeports may secure this country’s place as the favoured destination of the rich and unscrupulous.
That’s what Brexit opportunity means.

It’s possible to prevent some of the criminal uses of freeports if they are tightly regulated.
However, the government has so far failed to commit to the OECD’s protocol for preventing illicit trade, and boasts of “cutting red tape” in developing the ports: in other words, dismantling regulations.

If Tim Deere-Jones’s thesis is correct, marine ecosystems are already feeling the effects.
The government could be obscuring the likely impacts of the freeport’s construction before it has begun.
Those dead crustaceans look to me like a tide of dirty money, washing up on our beaches.