On January 7, 2021, at 0122 local time, the bulk carrier Ocean Princess, with a crew of 24, struck the uncrewed/out-of-service oil and gas production platform SP-83A while operating in the Gulf of Mexico, 24 miles south of Pilottown, Louisiana.
No pollution or injuries were reported.
Damage to the vessel and platform was estimated at $1.5 million. 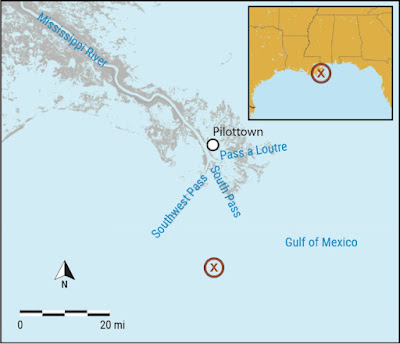 Area where the Ocean Princess contacted platform SP-83A, as indicated by a red X 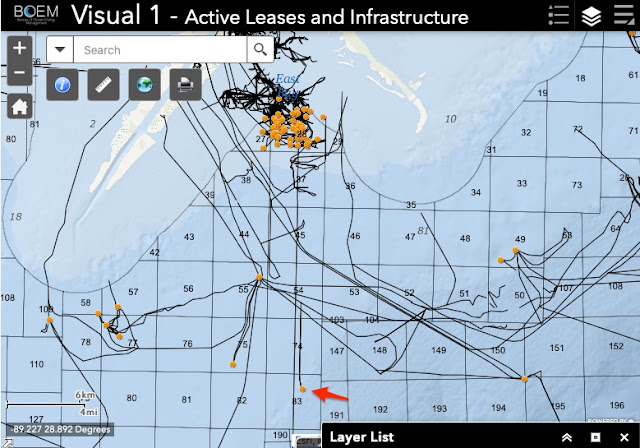 The Ocean Princess was a dry bulk carrier built by Tsuneishi Shipbuilding of Fukuyama, Japan, in 2002 for Ocean Line Holdings of Qingdao, China, the beneficial owner of 32 vessels.
The vessel was one of 32 managed by Ocean Longevity Shipping & Management Co. in Hong Kong, China.

Built in 1990, SP-83A was a US fixed oil and gas production platform located 11 miles offshore of Southwest Pass, Louisiana and 24 miles south of Pilottown, Louisiana, in the Gulf of Mexico, on the southern edge of the safety fairway that connected the approaches to Southwest Pass and South Pass to the Mississippi River.
A four-pile steel structure in 467 feet of water that rose 73 feet above the water, the platform was 162 feet long and 81 feet wide and had three decks and a heliport.
SP-83A was painted orange and equipped with eight flashing white lights with 2-mile visibility 53 feet above the water, and a fog signal with a 2-mile range.
It had been uncrewed since 2020, when it was taken out of service. SP-83A was owned by Arena Energy and managed by Arena Offshore of The Woodlands, Texas. 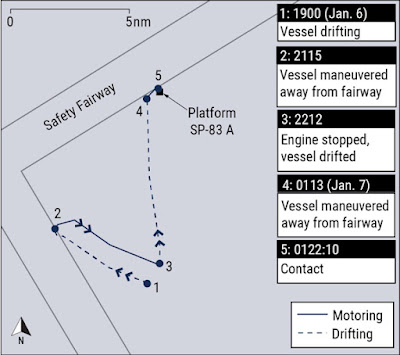 Plot of the Ocean Princess automatic identification system history
shows the vessel’s path  until the time of the casualty.
Navigation Charts
After the casualty, the master and the second officer noted that platform SP-83A was on the paper chart used on the bridge by the mate on watch, but SP-83A did not appear on the ECDIS.
The second officer stated that during the time leading up to the casualty he did not notice SP-83A was missing on the ECDIS.
The paper chart used on the bridge was British Admiralty chart 3857, Southern Approaches to the Mississippi River, 5th edition, December 20, 2012.
The chart was up to date and corrected with the most recent British Admiralty weekly notice to mariners. 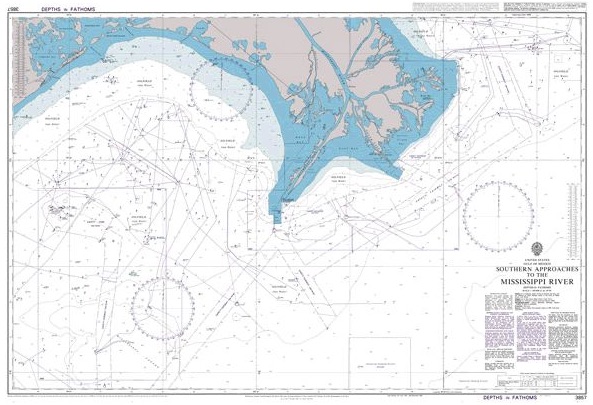 BA3857 Admiralty (scale 1:150 000)
In the casualty location, the ECDIS drew its electronic navigation chart (ENC) information from the National Oceanic and Atmospheric Administration (NOAA) Nautical Information System (NIS) database.
When reviewing the vessel’s ECDIS correction record for the previous year, investigators found that the automatic updates to the electronic navigation charts were received and loaded weekly to both ECDIS units aboard the Ocean Princess.
The last update before the casualty was 53/21

(January 1, 2021). Neither of the two applicable NOAA ENC vector charts covering the area where the casualty occurred contained platform SP-83A.
Although the Ocean Princess ECDIS unit was up to date with chart corrections, the two ENC vector chart updates did not contain platform SP-83A, and therefore SP-83A was not shown on the Ocean Princess ECDIS unit. 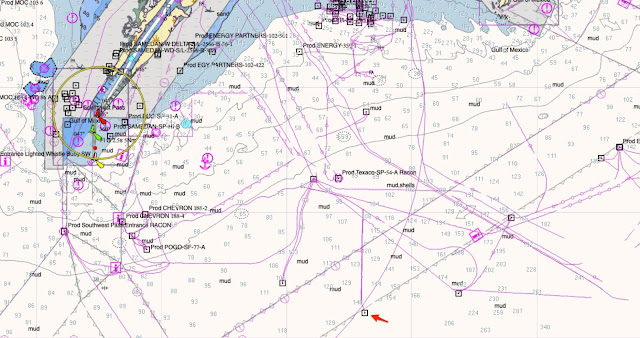 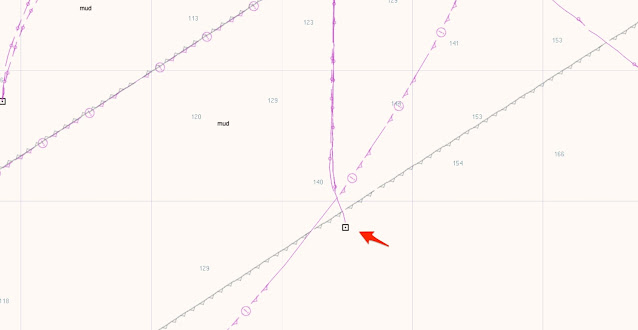 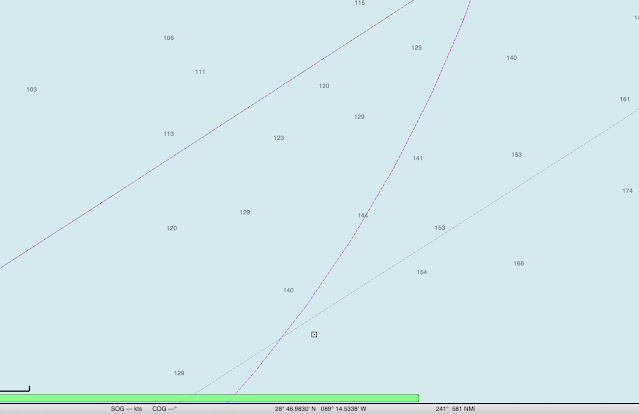 However old version of US4LA30M ENC (from 2012 GeoGarage archives)
seems to provide position info for SP-83A
Investigators also reviewed the three applicable NOAA paper navigation charts (11360, 11361, and 11366), which were up to date with the most recent notice to mariners, for the area where the casualty occurred.
SP-83A was depicted on only chart 11360 but not the other two larger-scale charts.
A representative of NOAA’s Marine Chart Division stated that platform SP-83A was added via a local notice to mariners in 1990, and the platform’s most recent revision was in 1994.
For unknown reasons, SP-83A disappeared from charts 11361 and 11366 in March 2010.
According to NOAA, ENCs were created from the raster (paper) charts, so the unexplained removal of platform SP-83A from the raster charts was critical to it also not appearing on the ENCs.

Since 2017, all NOAA ENCs have been stored in the NIS chart database and are no longer created from raster charts.
Changes to an ENC must be made through the NIS database, and critical chart corrections are issued via the Coast Guard’s local notices to mariners.
NOAA believes that, with NIS and its existing review procedure for ENC corrections and updates before public release, the error of SP-83A being omitted from ENC charts could not happen today.

The British Admiralty chart shows SP-83A while the ECDIS image does not.

Navigation aids used by the Ocean Princess bridge team, with the location of platform SP-83A shown annotated by NTSB with a yellow circle (images are at different scales).
A photo of the British Admiralty chart 3857 (left) and ECDIS screenshot from the Ocean Princess fed by NOAA ENCs (right), which were up to date at the time of the casualty.
There were three platforms in the general area where the vessel was drifting.
Although platform SP-83A was depicted on the British Admiralty paper chart on the bridge, it was not marked as an obstacle with red pencil as required by the company’s SMS, nor were the other two platforms nearby.
The second officer said he was aware of the platform when he plotted fixes on the paper chart nearly an hour before the casualty but did not think it was of concern.
He also stated that he did not tell the master about the platform on the chart and assumed the master was aware of it.
Postcasualty Actions

After the casualty, Coast Guard District 8 (CGD08) issued a Broadcast Notice to Mariners via VHF radio from January 26 to February 9, which provided platform SP-83A’s position and notified mariners that the platform was not displayed on electronic charts.
On February 3, CGD08 issued weekly Local Notice to Mariners 05/21 with the chart correction to add “Platform (Arena Offshore-107-1)” to the two large-scale paper NOAA charts covering the area where the casualty occurred.
On February 11, NOAA released the automatic corrections that added platform SP-83A to the two ENC vector charts covering the casualty area. 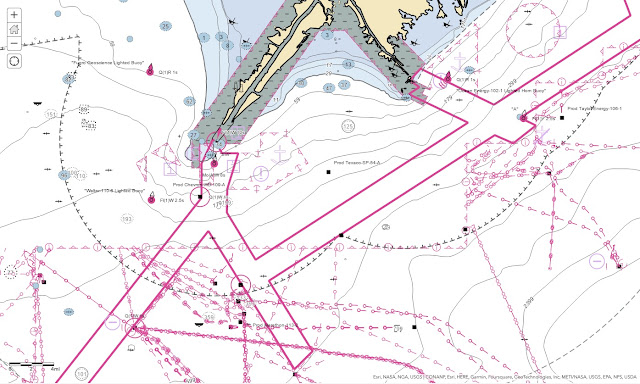 Platform SP-83A was not charted on the official US electronic or paper navigation charts that provided the chart data to the ECDIS aboard the Ocean Princess, but the platform did appear on the British Admiralty paper chart that the mate on watch was using at the time of the casualty.
The platform had been added to the US paper charts when installed in 1990, but for an unknown reason was omitted 20 years later in 2010 and remained off the two larger-scale US paper charts (charts 11361 and 11366) and ENCs for over 11 years—until after the casualty. 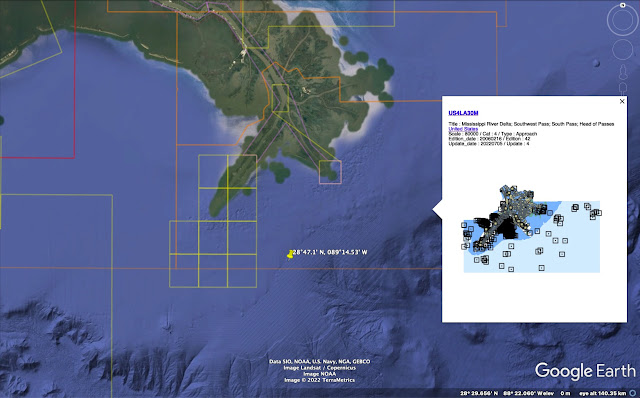 US4LA30M ENC
Following the casualty, NOAA updated and corrected electronic and paper charts that had been erroneously missing platform SP-83A.
Because ENCs have been stored in the NIS chart database since 2017 and the normal procedure for updating ENCs changed, NOAA believes the type of error that omitted SP-83A from the charts could not happen today.

The National Transportation Safety Board determines that the probable cause of the contact of the dry bulk carrier Ocean Princess with the oil and gas production platform SP-83A was poor bridge resource management, which resulted in the bridge team not identifying the platform and recognizing the risk it posed to their safe navigation even though they saw its lights about 10 minutes before the casualty.
Contributing was platform SP-83A not being shown on the vessel’s electronic chart display and information system due to a charting error.
Lessons Learned

Overreliance on the Electronic Chart Display and Information System
The effective use of all available resources by a bridge team, including paper charts, electronic charts, and radars, increases collective situational awareness and contributes to a safe navigation watch.
When identifying hazards, bridge teams should avoid overreliance on a single data source by cross-checking information with available bridge resources and communicating identified risks with fellow watchstanders to ensure a shared mental model.

Increasing operator vigilance and combatting overreliance requires healthy skepticism about situations and information sources regardless of how accurate they could be, or how confident one is in their own assessment.
In this casualty, the electronic chart display and information system (ECDIS) was missing the oil platform struck by the vessel due to a charting error.
The vessel’s safety management system noted, “ECDIS is a valuable asset in assisting navigators and allowing them more time to maintain a proper lookout by providing them with more detailed situational awareness.”
However, it also warned, “navigators should always cross check ECDIS information with the other sources," and, if not used properly, “ECDIS may contribute to accidents rather than preventing them.”
The inability to recognize the fallibility of technology, such as an ECDIS, can result in operator overreliance and overconfidence that degrades sound navigation practices and negatively affects situational awareness.
Links :
Posted by geogarage at 4:29 PM