Due to the power of the explosion, researchers expected to find dramatic changes to the volcano, but instead found it largely intact.
The research is also supported by The Nippon Foundation-GEBCO Seabed 2030 Project which aims to map the world’s ocean floor by 2030. 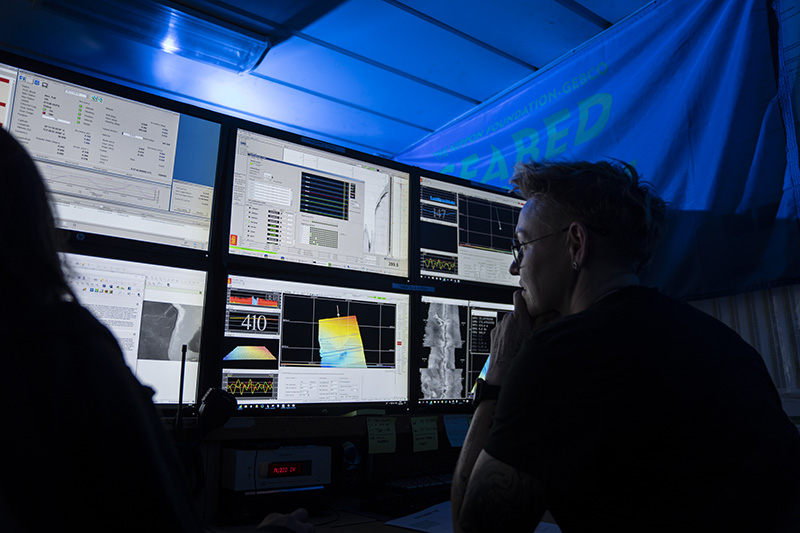 Scientists on board RV Tangaroa operate the multibeam echosounder revealing the impact of January’s eruption. [Photo: NIWA-Nippon Foundation TESMaP / Rebekah Parsons-King]
NIWA mapped 22,000 square kilometres of the surrounding seafloor, which showed changes covering an area of 8,000 square kilometres.
NIWA scientists recorded up to seven cubic kilometres of displaced material – the equivalent of 5 Wellington Harbours or 3 million Olympic-sized swimming pools – but there is likely more yet to be seen.
Tonga’s domestic internet cable that was broken and cut off communication is buried under 30 metres of ash and sediment. 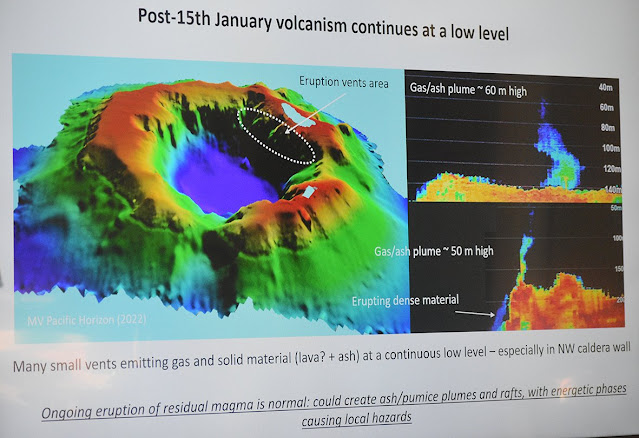 The voyage leader, NIWA marine geologist Kevin Mackay, says that he was completely taken aback by what they first saw.

“With an explosion that violent – the biggest ever recorded – you would expect that the whole volcano would have been obliterated, but it wasn’t. While the volcano appeared intact, the seafloor showed some dramatic effects from the eruption. There is fine sandy mud and deep ash ripples as far as 50 kilometres away from the volcano, with gouged valleys and huge piles of sediment.”

The team also studied impacts on the ecosystem. Sea life caught by underwater cameras on a seamount 80km from the volcano.
[Photo: NIWA-Nippon Foundation TESMaP]
The volcano is devoid of biology, but remarkably there are features as close as 15 kilometres away that still have abundant and diverse populations of fish and other animals.
Scientists speculate that they escaped impact by being out of the eruption flow’s pathway, or far enough away to avoid thick ash fall. Underwater footage showing sediment covering the flanks of the volcano.
[Photo: NIWA-Nippon Foundation TESMaP]
NIWA marine biologist Dr Malcolm Clark says that having healthy life close by is a positive sign.
“Although the seafloor on the volcano is largely barren, surrounding seamounts have pockets of normal biodiversity, such as corals, sponges, starfish, and mussels, indicating the resilience of such marine ecosystems and giving some hope for recovery. More work needs to be done before we can be confident of how the ecosystem will respond, but these surviving animal communities indicate what kind of life may repopulate HT-HH. The sites sampled during the voyage give us a baseline for monitoring recovery in the future.” Researchers collect water samples from the CTD.
[Photo: NIWA-Nippon Foundation TESMaP / Rebekah Parsons-King]
Preliminary data shows that the water column is still recovering, and some airborne ash is yet to completely settle on the seafloor.
There is also evidence that the volcano may still be erupting, with a dense ash layer found in the upper water column near the volcano.

NIWA biogeochemist Dr Sarah Seabrook says the persistence of ash they saw in the water column has a myriad of impacts on the ocean ecosystem. 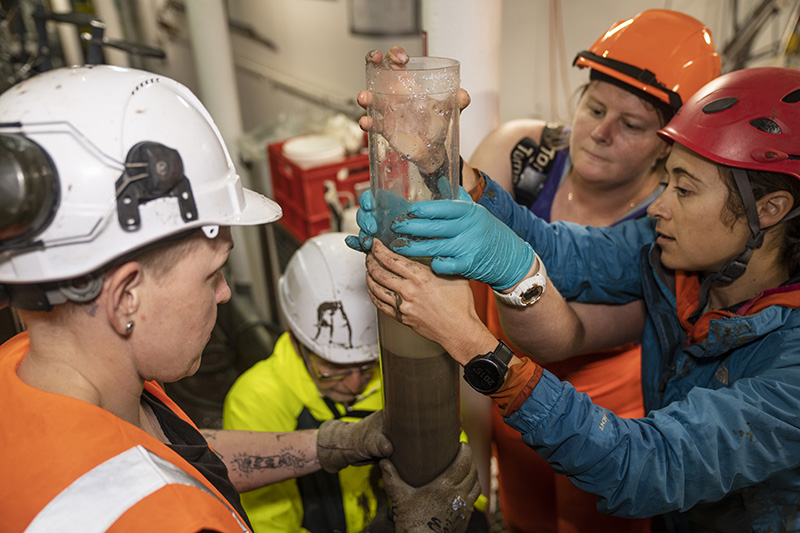 “In the immediate aftermath of an eruption, volcanic ash fertilises microscopic ocean algae thanks to the ash’s concentration of nutrients and trace metals - in this case, there was a bloom of life so big that we could see it from space."

“However, the unexpected persistence of the ash in the water column is creating prolonged impacts. For example, spikes in volcanic ash were coupled to the appearance of oxygen minimum zones – where oxygen levels in the water are at their lowest - which could have implications for important services provided by the ocean, such as food production and carbon sequestration.”

Scientists also collected hundreds of samples during their mission, including seabed cores, various corals and 250 kilograms of rock, some of which were newly formed from the eruption. Deploying the towed camera system to gather live images of the seafloor.
[Photo: NIWA-Nippon Foundation TESMaP / Rebekah Parsons-King]
The TESMaP project provides a unique opportunity to study the effects of an undersea volcano, which has huge implications for nations and ecosystems that live near these natural wonders.

Fisheries are a vital part of Tonga’s economy and subsistence, with species such as snapper and tuna being key to the region. There has been a reduction in some of Tonga's fleet, with many boats damaged in the tsunami which followed the eruption. Rebuilding the fleet is the highest priority and it will be a while before it is fully understood how fisheries have been impacted.

The mission has also given important insight into the fate of the broken domestic internet cable, with strong indications that this will need to be fully replaced.

Tonga’s Deputy Secretary for Lands and Natural Resources Taaniela Kula says this work is vital for the recovery of Tonga.

“The eruption sent shockwaves around the world, but the effects were felt most keenly in Tonga. It was a miracle to lose so few lives (God rest their souls), but our streets, crops, air, and waters were devastated."

“We, along with other nations on the Pacific Ring of Fire, know only too well how at mercy we are to nature. By studying an unprecedented event like this in such detail, we will gain invaluable knowledge and experience so we can recover quickly and be prepared for the next time something like this happens.”

The Nippon Foundation’s Executive Director Mitsuyuki Unno mirrored Mr Kula’s words.
“The eruption of Tonga’s underwater volcano is not ‘fire on the opposite shore’ but is also of great relevance to us living in Japan. We enjoy the ocean’s rich blessings but are faced with the risk of natural disasters that come with being an island nation on the Pacific Rim.
“This project is being conducted in the hope that understanding the effects of the volcanic eruption will contribute to the recovery of Tonga, where the sea is an important resource, and to the disaster preparedness of many countries, including Japan.”

The second part of the TESMaP mission will see the caldera mapped by an uncrewed surface vessel (USV), which was built by SEA-KIT International and is currently being transported from the UK. 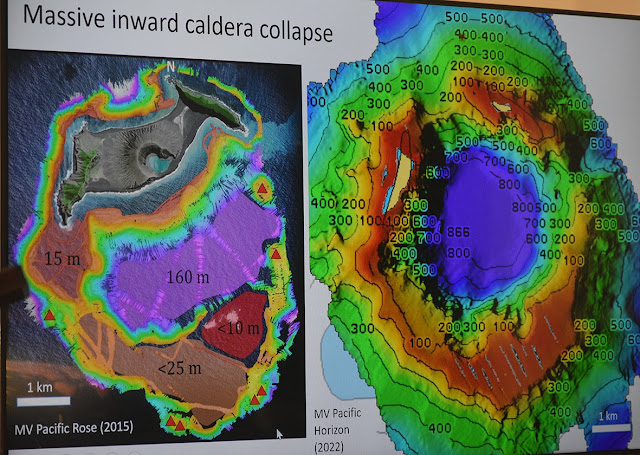 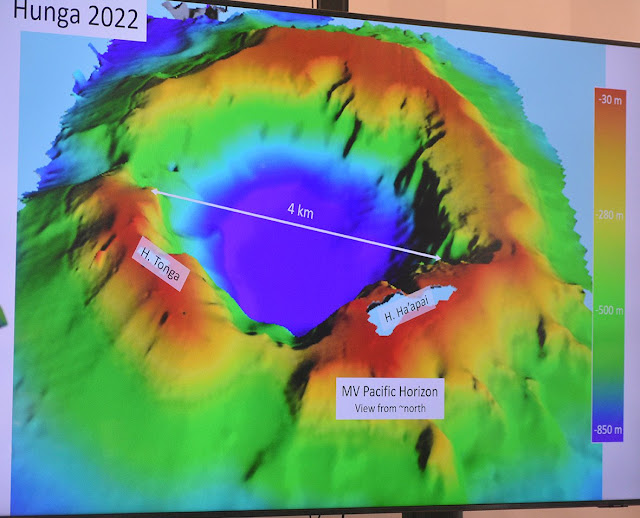 The caldera was unable to be surveyed during NIWA’s voyage because of safety reasons.

CEO of SEA-KIT Mr Ben Simpson says their vessel will fill in the final pieces of the puzzle.
“Our USV Maxlimer will map the current shape of the caldera and measure environmental conditions of the water above it, which are things we don’t yet know. Maxlimer will be controlled remotely from Essex in the UK, which is 16,000km away! The unmanned vessel will also use an innovative winch and sensor deployment capability to map any new volcanic activity. This is a truly global effort to get the full picture of a globally significant event, and we’re delighted to play our part in it”.

The unmanned part of the research mission to study the caldera is expected to be completed in mid-July.