France EEZ
From NavalNews by Xavier Vavasseur
A new "Seabed Warfare Strategy" was unveiled by French Minister of Armed Forces, Florence Parly and Joint Chief of Staff, General Thierry Burkhard on 14 February.
The strategy aims at broadening the capabilities of anticipation and action of the French Navy (Marine Nationale) up to 6,000 m depth.
The seabed constitutes a new field of conflict in the same way as exo-atmospheric space, cyberspace and the information sphere:

“The second exclusive economic zone in the world, France wants to be able to guarantee the freedom of action of its forces and to protect its sovereignty, its resources and its infrastructure even in the depths of the ocean” French Ministery of Armed Forces

Maritime areas are governed by a corpus of international standards, foremost of which is the United Nations Convention on the Law of the Sea (UNCLOS).
This text stipulates that the rights of States diminish as one moves away from the coast.
In recent years, however, some States have developed extensive interpretations of the convention, for the purpose of appropriating resources (mining, biological or fossil) or maritime areas with regard to the geopolitical situation of the area.
Faced with these assertions of power, the resurgence of hybrid actions in the seabed and the emergence of the concept of “seabed warfare” (mastery of the seabed), the protection of France’s strategic interests in this space is a decisive issue for :
Seabed Control Operations aim to integrate these new challenges into the French defense strategy.
This doctrine will be articulated around three functions “know”, “monitor” and “act”. 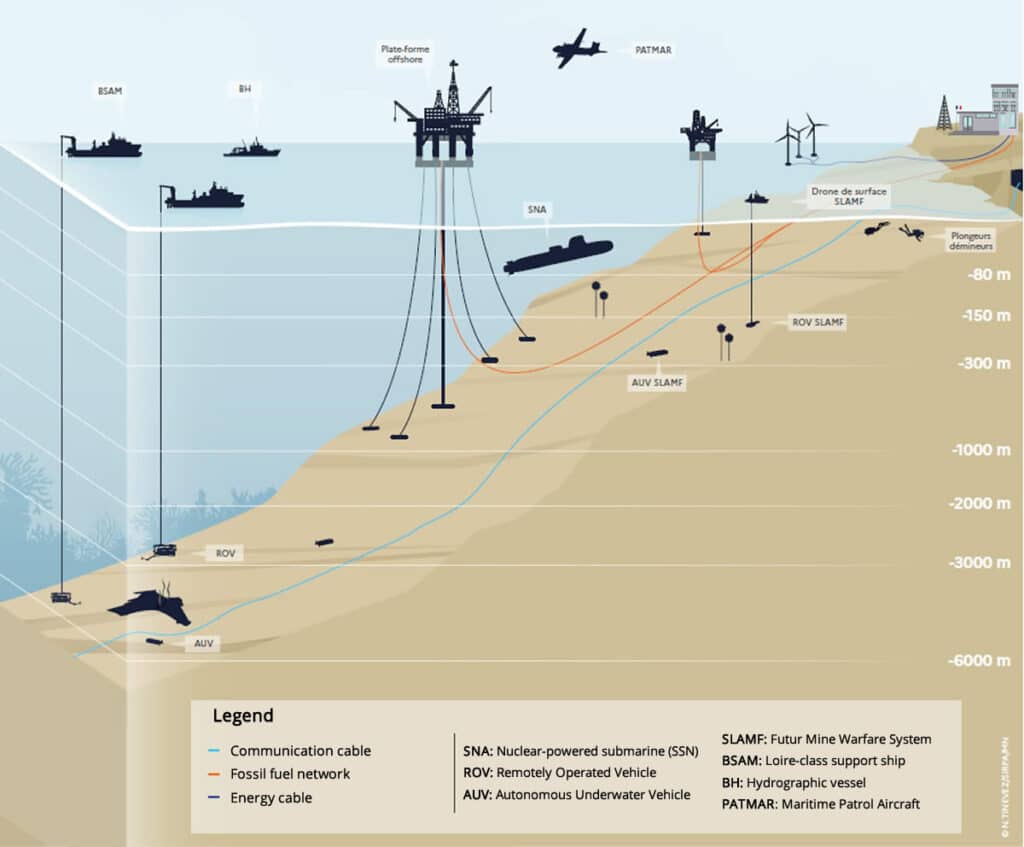 Marine Nationale illustration (translation by Naval News).
The French Navy already has mine warfare and hydro-oceanography capabilities contributing to the control of the seabed.
For expanding its investigation and action capacities down to 6,000 meters deep, France is going to equip itself with deep-sea exploratory military capacities, made up of underwater drones (AUV – Autonomous underwater vehicle) and robots ( ROV – Remotely operated vehicle).
The ambition to control the seabed to protect France’s strategic interests:

“We are obviously not the only ones interested in the seabed. There are many powers that display their ambitions more or less clearly, even if it is under the seal of secrecy for the majority of them. China is known to have an advanced project for a great underwater wall, or more openly, the British have expressed their ambition for the seabed in the Integrated Review of 2021.” Florence Parly

The strategy of the Ministry of the Armed Forces will support the development of innovation with the private sector and the emergence of a national sector responding to its needs in the great ocean depths. 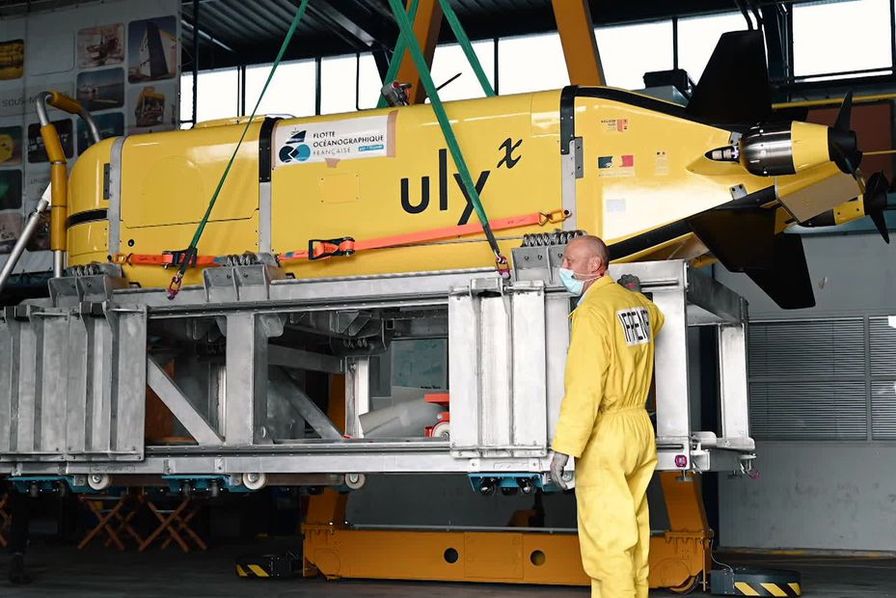 The IFREMER’s deep diving (6,000 meters) UAV “Ulyx” designed and produced by ECA Group. IFREMER picture.
For example, ECA Group designed and produced the new generation deepwater AUV for IFREMER, (French Research Institute for Exploitation of the Sea), an oceanographic institution.
Ulyx will be deployed from French and international oceanographic research vessels for deep water exploration and research. A military variant of such an AUV could be designed for the French armed forces in the future.
The Chief of Staff of the French Navy, Admiral Vandier, shared on Twitter pictures showing a French Navy officer during a demonstration aboard IFREMER’s Nautile deep-submergence vehicle (DSV):
“2152 meters under the sea. Lieutenant Arnaud is the 1st French navy active officer to reach this depth with the Eledone demonstration on board the IFREMER’s Nautile, to inspect a submarine cable. A success which is part of the French strategy to control the seabed.”