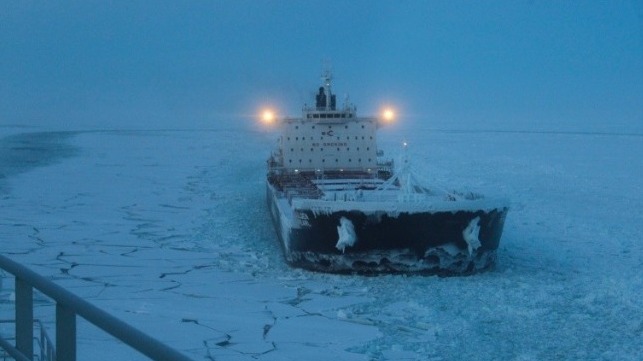 Climate models project continued and dramatic Arctic sea ice reductions, including nearly ice-free summer conditions by the mid-21st century.
While Arctic navigation depends on other factors besides sea ice - including economics, infrastructure, bathymetry, and weather - these projections are useful for strategic planning by governments, regulatory agencies, and the global maritime industry.

The planet’s fast-warming climate brings new opportunities for international transportation networks and offers shorter maritime navigation distances, at least during summer months.
In particular, the opening of Russia’s Northern Sea Route (NSR) increases the need for new ports and modern infrastructure to service ships that plough through ice-free and ice-covered waters.
Projections suggest that the NSR's July-October navigation season will average about 120, 113, and 103 days for PC3, PC6, and OW vessels (respectively) by late-century.

The global competition for the Arctic is clearly intensifying.
One way to understand the unfolding drama is to look at the situation facing Arctic ports.
The icy world which these ports have known, since the very first vessels came ashore, is changing much faster than humans had ever expected.

Arctic shipping arteries are operated by abundant vessels and icebreakers, sailing between principal locations behind the Arctic Circle, Europe and Asia, which means that they need to be supported by well conducted system of hubs.
In lower latitudes, shipping ports are mostly located near city cores, since most cargo activities start and end there.
A supply of longshore labor is another reason for ports to be located close to larger cities.
This means that deepwater ports (and the services they provide) are typically close to global maritime shipping and often taken for granted.

The situation in the Arctic is quite different.
Deepwater ports, places of refuge, marine salvage, adequate port reception facilities for ship-generated waste and towing services are rarely available.
The availability of port infrastructure and support directly influences the level of risk associated with transiting a particular waterway – and it directly corresponds to the levels of marine insurance rates.

There are few deepwater ports in U.S. or Russian waters near the Bering Strait.
The closest U.S. harbor with deep water is Dutch Harbor in the southern Bering Sea.
On the Russian Federation side, the nearest deepwater port is Provideniya.
Other Russian ports near the Bering Strait that are closed to foreign ships are Egvekinot, Anadyr and Beringovsky.

In the North American Arctic, there are essentially no deepwater ports along the North Slope of Alaska, or throughout the Canadian Archipelago, except for the port of Tuktoyaktuk.
Tuktoyaktuk suffers from a shallow approach channel and a high degree of in-fill silting.
There are also limited port facilities at Resolute Bay, in the middle of the archipelago, which acts as a center of transportation, communications and administration for the high Arctic.
However, it can only handle ships of 16 feet of draft alongside a sunken barge used as a dock.

In the Hudson Bay, the Port of Churchill is Canada’s only northern deepwater seaport.
It enjoys well-sheltered infrastructure, alongside berthing facilities.
It provides access, via rail, to the interior of Canada and North America in general.
The growing Port of Churchill offers four berths for the loading and unloading of grain, general cargo and tanker vessels, and it can efficiently load Panamax size vessels.
The current shipping season runs from mid-July to the beginning of November, though the use of icebreakers could significantly lengthen the shipping season.

The primary Russian ports in the Arctic are Murmansk, Archangelsk, Dudinka, Varandei, Vitino, Kandalaskha.
Upgrade and modernization investments are now underway in each one of these.
Statistics show that Murmansk Oblast is the biggest Arctic shipping hub.
Located on the Kola peninsula at the coast of Barents Sea, it is a non-freezing port which can service any type of vessels.
Since 2004, more than €4.4 billion have been invested in improving Murmansk’s deepwater port facilities to include new oil, coal and container terminals, as well as expanded rail lines.

At the other end of the Arctic, Vladivostok is being developed as a significant North-East Asian hub, offering access to China, Japan and South Korean markets.
The port of Petropavlovsk on the coast of Kamchatka is also set to be developed as an eastern hub for the Northern Sea Route.

Russia and China invest in the Northern Sea Route

The Russia-China trade corridor is now the focus of intense concern in both Beijing and Moscow.
The political and trade ties of these two countries are on the rise, and with billions of dollars being spent on the hard infrastructure, those opportunities are only going to increase.
With the increasing number of Free Trade Agreements that China and Russia share, it appears certain that significant future investment potential lies within this corridor.

China has been a huge investor in the Russian Arctic economy, and not just within the region’s hyper-active oil and gas sector.
Beijing’s leaders know quite well that the Northern Sea Route is set to become a major global shipping route for cargoes flowing from Asia to Europe, and vice versa.
Russia has responded to the big opportunities that it sees (and that China also sees) by designating the entire region as a “Free Trade Zone,” as defined by Russian national law.
It covers an area which stretches for nearly 5 million square kilometers.
Arctic residents will enjoy tax benefits and easier administrative procedures.

Work on this newly designated zone is focused on attracting both Russian and non-Russian private sector investments into road and rail, including Chinese investment.
New (and, some think, quite generous) tax incentives are currently being offered to investors, while the knock-on infrastructure requirements are huge.
$243 billion is being set aside in funding in a region that is expected to generate $500 billion per annum by 2030.
Major projects to upgrade Arctic ports are already underway.

In October of last year, President Vladimir Putin formally adopted the “Strategy for the Development of the Russian Arctic Zone and Provision of National Security Through 2035.” The Strategy gives particular significance to Murmansk Oblast, emphasizing a broad range of complex and multifaceted transformative measures targeting this province.
Murmansk has long been the Russian Federation’s most prioritized Arctic entity.

The “Strategy” document lays out the plan for multiple geographies within the country:
Chukotka will see a series of ambitious transit projects.
Those include the Pevek seaport and terminals (Chaun Bay), a transportation-logistical hub in the Provideniya port (Bering Sea), and a year-round sea terminal on the Arinay Lagoon (also on the Bering Sea).
In the Yamal, the document’s envisages several ambitions.
One is the development of an integrated system of transportation infrastructure, which includes measures in both sea- (the port of Sabetta with supporting facilities as well as the canal in the Gulf of Ob).
In the Nenets Autonomous Okrug, the Strategy it calls for the development of strategic-level transportation infrastructure.
Namely, the document emphasizes plans to build a deep-water, ice-free Indiga Seaport suitable for ships with a deadweight of at least 100,000 tons.

In January of 2020, Russia’s government approved a number of acts to give new economic benefits and subsidies to businesses or investors willing to engage in projects in the country’s High North.
This legal framework covers Murmansk Oblast, Chukotka, Yamalo-Nenets Autonomous Okrug and Nenets Autonomous Okrug as well as portions of five other federal subjects - Arkhangelsk Oblast, Sakha Republic (Yakutia), Krasnoyarsk Krai, the Republic of Karelia and the Republic of Komi.

It is all aimed at attracting foreign investors capital into the Arctic territories, and Russia has outlined four main types of projects that will receive a program of benefits from the central government:
The extraction of hydrocarbons located offshore, on Russia’s continental shelf, with a severance tax (imposed on the removal of natural resources) set at 5 percent for oil and 1 percent for natural gas over the next 15 years.
The extraction of hydrocarbons on the continent, with an emphasis on liquefied natural gas (LNG) and gas-chemistry (gazokhimiya).
New investors are expected to be promised a severance tax of zero percent in the next 12 years upon starting industrial extraction.
The production of LNG (as well as other projects related to the gazokhimiya industry).
Investors will have to pay the severance tax in full only after 17 years of industrial production.
For other projects the potential benefits largely depend on what’s being extracted, and the project’s scope.
Aside from non-hydrocarbon-related investments (including minerals), this type includes infrastructure projects (such as seaports and pipelines).

Alexander Kozlov, who heads the Ministry for Development of the Russian Far East and Arctic, says that the Arctic zone’s share of Russian GDP is close to 10 percent and receives 10 percent of total foreign direct investment.
It suffers from chronic under-population, containing less than 1.5 percent of the total Russian population.
Over the past 15 years, the local population has actually decreased by 300,000, according to Kozlov.

Russia’s hopes for the region are pinned on the prospect of creating more than 21 new large regional mega-projects (including the Indiga Port in the Nenets Autonomous Okrug), exploration of large deposits of platinum and other metals in Krasnoyarsk Krai and Murmansk Oblast, and the creation of a full-cycle lumber/timber-producing complex in Arkhangelsk Oblast.

Decreasing sea ice is extending opportunities for global shipping, in turn increasing the geostrategic importance of the region.
The Arctic is rapidly becoming a new theater of great-power competition – both geo-economic and geo-strategic.

Russia has been attempting to expand its exclusive economic zones in the region and is conducting enforcement operations with internationally unrecognized authority in Arctic Seas.
The Russian military has also been improving its capabilities to operate in the Arctic.
Similarly, China, coveting Arctic shipping routes and potential resources, has been attempting to legitimize potential future Arctic claims by describing itself as a “near-Arctic” power.

Russia has the most expansive Arctic territory of any of these countries, and it is by far the most capable Arctic competitor.
The Kremlin views the Arctic as critical to its overall national defense strategy.
Consequently, the country is actively preparing its military forces to operate there, while simultaneously working to secure and exploit the region’s untapped resources.
Russia hopes to control enough Arctic resources, particularly energy resources, to ensure national economic stability and growth while controlling all shipping near its coastline and maintaining sufficient military power to deter any aggressors crossing the Arctic.

Russia maintains that its extensive Arctic capabilities give it additional rights, and has claimed authority to regulate ships transiting international waters in the NSR.
This policy has been protested by other nations, who state that it violates international laws— specifically the United Nations Convention on the Law of the Seas (UNCLOS).
However, UNCLOS—along with the Polar Code—may be inadequate for the unique Arctic environment.
Ambiguities and inconsistency between them have resulted in the Arctic nations enacting their own navigation laws and policies.
Links :
Arctic shipping passage 'still decades away'  /
Posted by geogarage at 1:30 AM