Data storage, mining and wind: oceans seen as new frontier but at what cost? 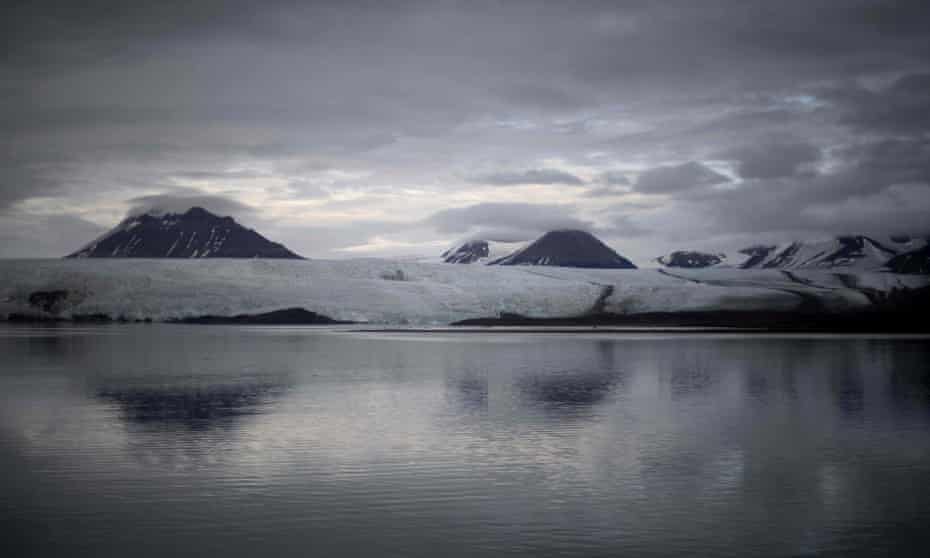 In September 2017, a giant, floating fish farm capable of raising 1.5 million salmon was installed in central Norway.
Besides its vast size – the circular structure is roughly the equivalent of two baseball fields – what set SalMar’s Ocean Farm 1 apart was its location three miles off the coast.
It was hailed as the world’s first offshore salmon farm.

But the facility now lies empty, awaiting the development of new nets after farmed salmon escaped through a tear.
Tougher nets will be vital for SalMar’s next-generation Smart Fish Farm that’s slated to be four times bigger and will operate even farther from the coast.

Plans to place fish cages offshore are part of a wider trend among industries that are gazing out to sea in an effort to find more space, more cold, clean water and more wind.
Many are chasing an ambition of greater sustainability.
These initiatives are mostly at an early proof-of-concept stage, but they offer a glimpse of what the future of the ocean could look like, as well as some of the risks. 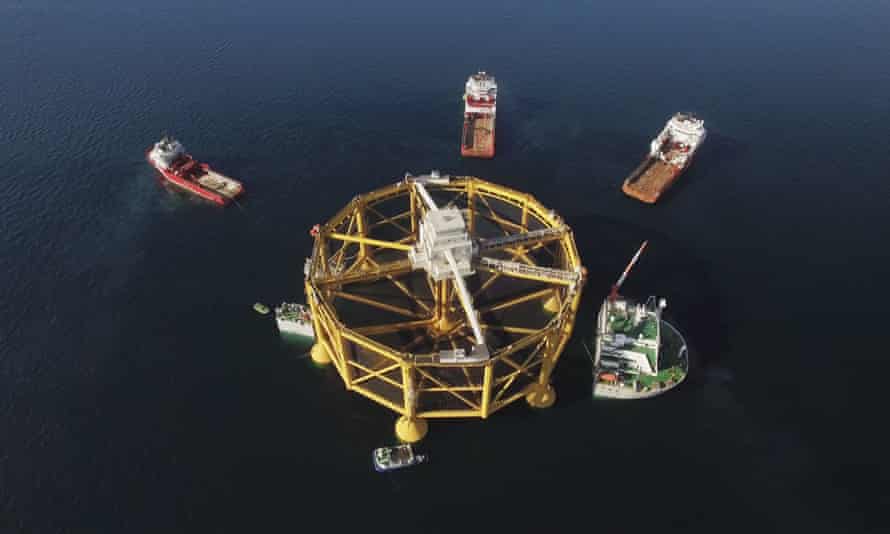 SalMar’s Ocean Farm 1, three miles off the coast of Norway.
Photograph: SalMar ASA/PA
“It’s not the first time we’ve had a kind of offshoring initiative,” said Klaus Dodds, professor of geopolitics at Royal Holloway, University of London.
Popular culture in the 1960s and 70s portrayed the ocean as offering a brighter, shinier future with new opportunities to advance humanity, from seabed mining to living underwater.
“I have a suspicion that the ocean yet again will become either a place for technical scientific fixes or for capitalism to constantly reinvent itself with clever new solutions,” says Dodds.

Part of the new wave of industrial interest in offshore waters comes from tech companies.
Microsoft has tried sinking data centres to see how well the sea can cool the systems and save power.
After two years underwater a mile off Orkney in Scotland, a storage device was brought up encrusted in sea life.
It performed well in its time underwater, according to the company, with fewer failures than land-based systems, and its energy efficiency is being analyzed.

A number of problems could arise if seabed data storage takes off.
“Where does all the heat go for oceans and seas that we’re already worried about in terms of warming?” Dodds said.
It’s also unclear whether operators would carefully remove units at the end of their lifespans, possibly raising equivalent problems as encountered with decommissioning oil rigs in the North Sea.
“I want to see some more careful research that really reassures me that overall, given the scaling-up implications, that it really is better to be offshore as opposed to on land,” Dodds said.
Advertisement

He has seen a lot of interest from companies in data storage in the cold climate of Arctic regions but little research into the implications for ocean biodiversity.
“There’s this presumption that just because we can’t see something or just because the ocean is so enormous, we can probably crack on.”

As well as new ideas for using the ocean, old ones are coming back.
After a decades-long hiatus, mining companies are once again planning to exploit metallic deposits on the deep seabed.
This latest rush to mine the deep is facing growing opposition.
Civil society, governments, scientists and corporations are calling for a moratorium on seabed mining due to the likely impacts on biodiversity and climate.

The International Seabed Authority (ISA), the global regulator, is holding an in-person meeting in December at its headquarters in Jamaica, despite requests from states and observers to postpone – pandemic-related travel restrictions mean the meeting is not likely to be well-attended.
In a letter to the ISA in October, the Deep-Sea Conservation Coalition criticised the plan as “out of step with the growing calls for more inclusion in global decision-making”.
Critics are concerned the ISA may take the opportunity in December to give the deep-seabed mining industry the go-ahead to commence in 2023. 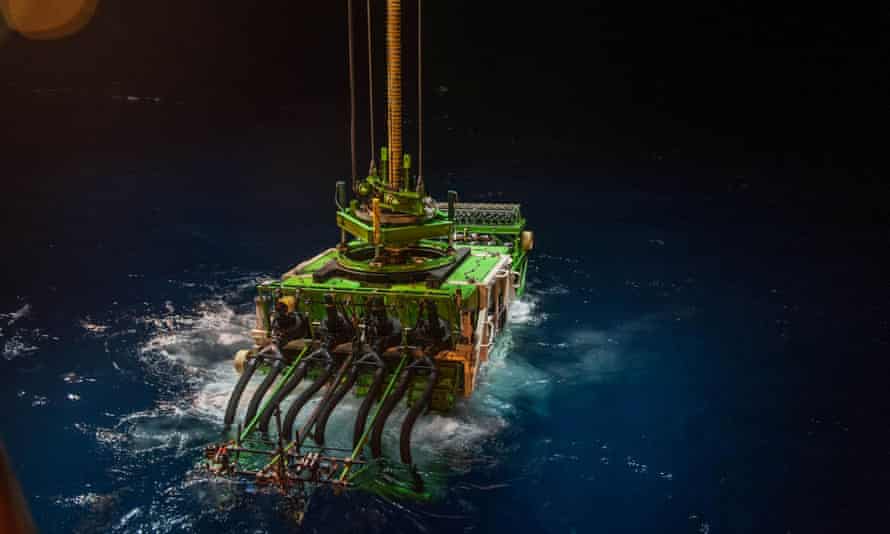 Deep-sea mining robot Patania II was trialled in the Pacific Ocean in April 2021.
Photograph: GSR/Reuters
The race for the ocean has caused conflicts to unfold between different offshore users.
While offshore aquaculture companies are keen to emphasise the sustainable credentials of their operations, they face opposition.

The Don’t Cage Our Ocean Coalition, a group of environmentalists, consumer advocacy organisations and fishing organisations, liken these offshore operations to land-based industrial feedlots.
Their concerns include escaped fish mingling with wild populations and adding nutrients and pollutants to waters that in many places are already struggling.
“It’s all going somewhere, even if we don’t see it,” says founding member Marianne Cufone.
The organisation is campaigning against US federal waters being opened to large-scale fin fish farming, such as salmon and tuna.

At present, there’s no aquaculture in US federal waters but that could change if plans go ahead to streamline the permitting process.
Other regions, Cufone says, are stepping away from fish farms both inshore and offshore, including a Danish moratorium on new fish farms and Canadian plans to phase out ocean fish farms in waters off British Columbia.
“We should learn from what comes before us and move on to smart, progressive, thoughtful, sustainable approaches if we want to increase domestic seafood production without harming our fishing communities and others who care about and want to use the waters,” she said.

The wind energy sector is also looking to move further offshore and meeting resistance from environmentalists and fishing industries.
Earlier this year, the Biden administration committed to building 30 gigawatts of offshore wind capacity by 2030.
Many fishers feel they are being forgotten in the race to tackle the climate crisis.
They are worried about losing access to fishing grounds and that windfarm installations could disrupt ocean currents and fish populations.

Offshore wind developers have held meetings with fishermen to plan windfarms more collaboratively.
After talking with fishers, Empire Wind, a proposed offshore windfarm south of Long Island, changed its plans to include an area open to fishing.

A lack of inclusive planning risks causing problems in UK waters, where the government has pledged to install 40 gigawatts of offshore wind by 2030.
Nature conservation groups are worried the current planning regime is not fit for purpose.
“At the moment, the industry is very project-led,” says Joan Edwards, director of marine conservation at The Wildlife Trusts.

Windfarm developers in the UK can pick an area and approach the crown estate, which owns most of the seabed around the UK out to 12 nautical miles, for a lease.
A better approach, Edwards says, would be to identify places nationally where offshore wind will not affect important parts of the marine environment, via noise pollution and digging up the seabed for cabling.
“We need to work out just how best to develop this industry so that it gives us renewable energy but doesn’t create more of a problem for nature,” she says.

With industries rushing offshore, the ocean is on a course to become more crowded.
To avoid a messy and damaging scramble for marine real estate, a coordinated approach is needed.
“We’re really going to have to be very confident these things are being regulated, monitored and evaluated holistically, and over the long term as well,” says Klaus Dodds.
“There’s a real danger that we think the oceans are this kind of frontier space, that we can just do things and worry about the implications later.
That’s patently not true.”
Links :
Posted by geogarage at 1:51 AM