video
From NASA by Emily Cassidy
Researchers are using satellite data and machine learning to map microplastic concentrations across the ocean.

About 8 million tons of plastic flow from rivers and beaches into the ocean every year.
These plastics are carried by ocean currents and broken down by waves and the Sun into small microplastics.
Much of it floats at the calm center of circular ocean currents (called gyres) in large garbage patches.
The Great Pacific Garbage Patch, which is between California and Hawaii, is a well-known garbage patch because there’s a lot of ship traffic going through it.

Scientists typically measure how much plastic is in garbage patches by dragging nets behind boats.
This sampling method is geographically sparse and doesn’t give researchers a sense of how much plastic concentrations change over time.

A new method developed by researchers at the University of Michigan (UM) maps the concentration of ocean microplastics across the world using satellite data.
The researchers used data from eight microsatellites that are part of NASA’s Cyclone Global Navigation Satellite System (CYGNSS) mission. CYGNSS satellites receive signals reflected off the ocean from global positioning system (GPS) satellites to measure the roughness of the ocean surface.
These roughness measurements provide scientists with measurements of ocean wind speeds that are used to understand and predict hurricanes.

When there’s plastic or other debris in the ocean, waves are dampened, creating less roughness than expected.
“In cleaner waters there’s a high degree of agreement between ocean roughness and wind speed,” said Professor Chris Ruf, principal investigator of the CYGNSS mission and one of the authors of the research.
“But as you head into the Great Pacific Garbage Patch you see a bigger discrepancy between wind speed measurements and the roughness of the surface.”
Ruf and UM research assistant Madeline Evans compared CYGNSS roughness measurements to NOAA measurements of ocean wind speeds to see where waters were less rough than expected.
Using this method, in combination with plastic concentration data from literature, Ruf and Evans mapped daily concentrations of microplastics across the ocean.
This microplastics dataset was recently published at NASA’s Physical Oceanography Distributed Active Archive Center (PO.DAAC). 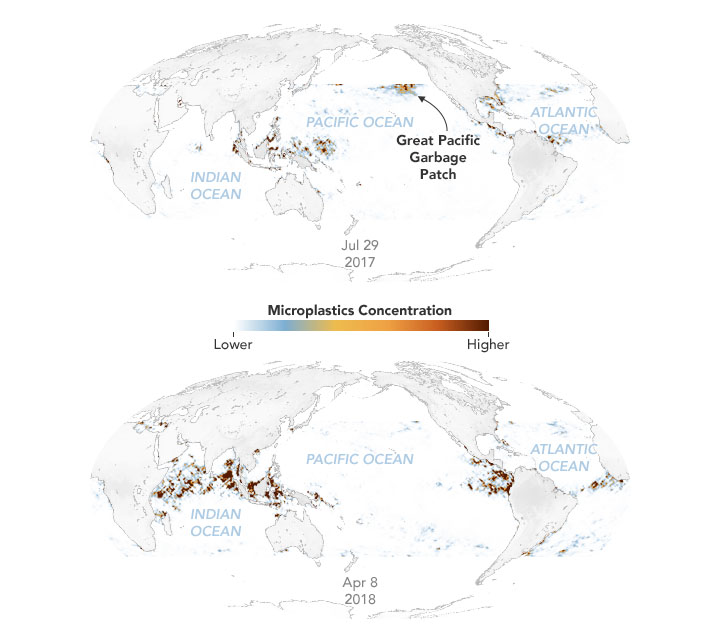 This research is the first to map ocean microplastics over such a large area and is the first to map concentrations at a high temporal resolution, revealing seasonal variations in microplastic concentrations.
In the Great Pacific Garbage Patch for example, microplastic concentrations are higher in the summer and lower in winter.
They saw similar seasonal variation in garbage patches in other gyres too, due to more vertical mixing when the temperatures are cooler. Ruf and Evans also did a time-lapse of all of the major rivers in the world and saw a large amount of microplastics coming from the Yangtze and Ganges.

Another innovative way of detecting ocean debris and plastics in the ocean was recently developed by NASA’s Interagency Implementation and Advanced Concepts Team (IMPACT).
The research team used machine learning, open-source tools, and imagery from Planet Labs to find debris in the ocean.
They trained a model, based on ground truth observations, that can automatically detect and label marine debris globally.
The open-source code they developed (available on the IMPACT GitHub) could also be used to detect other phenomena on Earth using satellite imagery.
Links :
Posted by geogarage at 1:09 AM