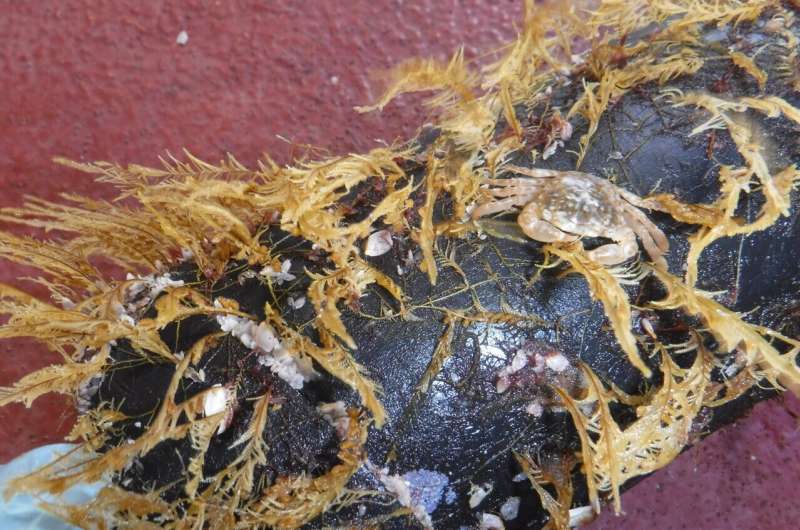 Coastal plants and animals have found a new way to survive in the open ocean—by colonizing plastic pollution.
A new commentary published Dec.2 in Nature Communications reports coastal species growing on trash hundreds of miles out to sea in the North Pacific Subtropical Gyre, more commonly known as the "Great Pacific Garbage Patch."

"The issues of plastic go beyond just ingestion and entanglement," said Linsey Haram, lead author of the article and former postdoctoral fellow at the Smithsonian Environmental Research Center (SERC).
"It's creating opportunities for coastal species' biogeography to greatly expand beyond what we previously thought was possible."

Gyres of ocean plastic form when surface currents drive plastic pollution from the coasts into regions where rotating currents trap the floating objects, which accumulate over time.
The world has at least five plastic-infested gyres, or "garbage patches."

The North Pacific Subtropical Gyre, between California and Hawai'i, holds the most floating plastic, with an estimated 79,000 metric tons of plastic floating in a region over 610,000 square miles.
While "garbage patch" is a misnomer—much of the pollution consists of microplastics, too small for the naked eye to see—floating debris like nets, buoys and bottles also get swept into the gyres, carrying organisms from their coastal homes with them. 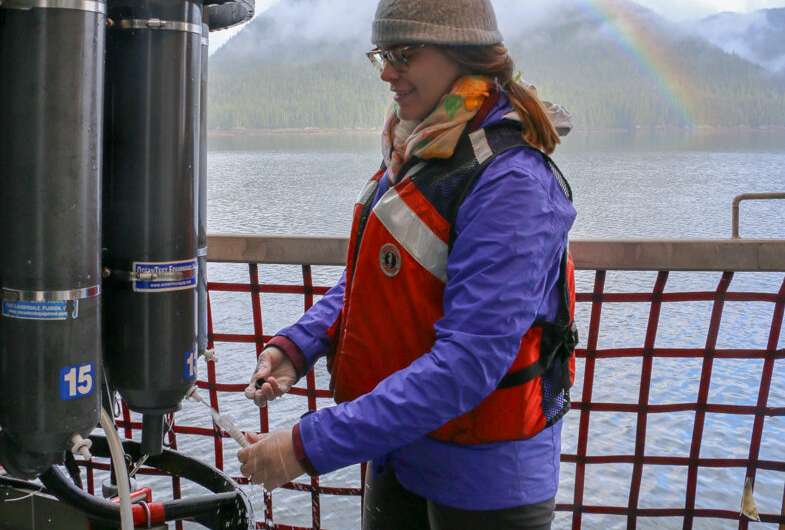 Linsey Haram, a marine biologist who studies organisms on ocean plastic, on an expedition to British Columbia.
Credit: Stephen Page

The authors call these communities neopelagic.
"Neo" means new, and "pelagic" refers to the open ocean, as opposed to the coast.
Scientists first began suspecting coastal species could use plastic to survive in the open ocean for long periods after the 2011 Japanese tsunami, when they discovered that nearly 300 species had rafted all the way across the Pacific on tsunami debris over the course of several years.
But until now, confirmed sightings of coastal species on plastic directly in the open ocean were rare.

One advantage of the institute, Haram—now a fellow at the American Association for the Advancement of Science—pointed out, is the low carbon footprint of its vessels.
"It can take a lot of energy to get out to the middle of the ocean with a gas-powered boat," she said.
"So they use large-cargo sailing vessels to go around and remove plastics from the open ocean."

During the first year of the COVID-19 pandemic, Ocean Voyages Institute founder Mary Crowley and her team managed to collect a record-breaking 103 tons of plastics and other debris from the North Pacific Subtropical Gyre.
She shipped some of those samples to SERC's Marine Invasions Lab.
There, Haram analyzed the species that had colonized them.
She found many coastal species—including anemones, hydroids and shrimp-like amphipods—not only surviving, but thriving, on marine plastic. 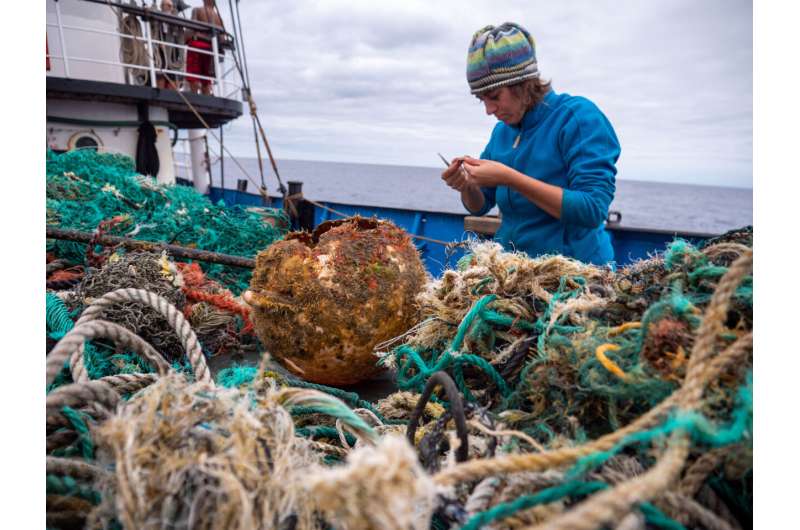 For marine scientists, the very existence of this "new open ocean" community is a paradigm shift.

"The open ocean has not been habitable for coastal organisms until now," said SERC senior scientist Greg Ruiz, who heads the Marine Invasions Lab where Haram worked.
"Partly because of habitat limitation—there wasn't plastic there in the past—and partly, we thought, because it was a food desert."

The new discovery shows that both ideas do not always hold true.
Plastic is providing the habitat.
And somehow, coastal rafters are finding food.
Ruiz said scientists are still speculating exactly how—whether they drift into existing hot spots of productivity in the gyre, or because the plastic itself acts like a reef attracting more food sources.

Now, scientists have another shift to wrestle with: How these coastal rafters could shake up the environment.
The open ocean has plenty of its own native species, which also colonize floating debris.
The arrival of new coastal neighbors could disrupt ocean ecosystems that have remained undisturbed for millennia.

And then there is the invasive-species threat.
Scientists have already seen that begin to play out with Japanese tsunami debris, which carried organisms from Japan to North America.
Vast colonies of coastal species floating in the open ocean for years at a time could act as a new reservoir, giving coastal rafters more opportunities to invade new coastlines.

The authors still do not know how common these "neopelagic" communities are, whether they can sustain themselves or if they even exist outside the North Pacific Subtropical Gyre.
But the world's dependence on plastic continues to climb.
Scientists estimate cumulative global plastic waste could reach over 25 billion metric tons by 2050.
With fiercer and more frequent storms on the horizon thanks to climate change, the authors expect even more of that plastic will get pushed out to sea.
Colonies of coastal rafters on the high seas will likely only grow.
This long-overlooked side effect of plastic pollution, the authors said, could soon transform life on land and in the sea. 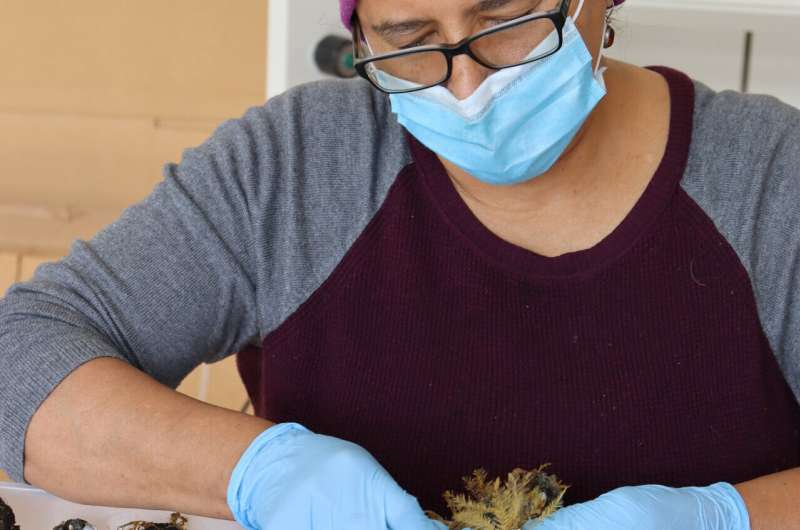 Luz Quiñones, a scientist in SERC's Marine Invasions Lab, analyzes a mix of coastal organisms (the podded hydroid Aglaophenia pluma) and open-ocean organisms (Lepas gooseneck barnacles) on a colonized net.
Credit: Smithsonian Institution
Williams College, the Scripps Institution of Oceanography, the Institute of Ocean Sciences in British Columbia and the Applied Physics Laboratory of the University of Washington also contributed to this article.
For this discovery, Haram teamed up with Ocean Voyages Institute, a nonprofit that collects plastic pollution on sailing expeditions, and a pair of oceanographers from the University of Hawai'i at Manoa.
The oceanographers, Jan Hafner and Nikolai Maximenko, created models that could predict where plastic was most likely to pile up in the North Pacific Subtropical Gyre.
They shared that information with Ocean Voyages Institute.
Links :
Posted by geogarage at 1:27 AM