The deep sea is filled with treasure, but it comes at a price 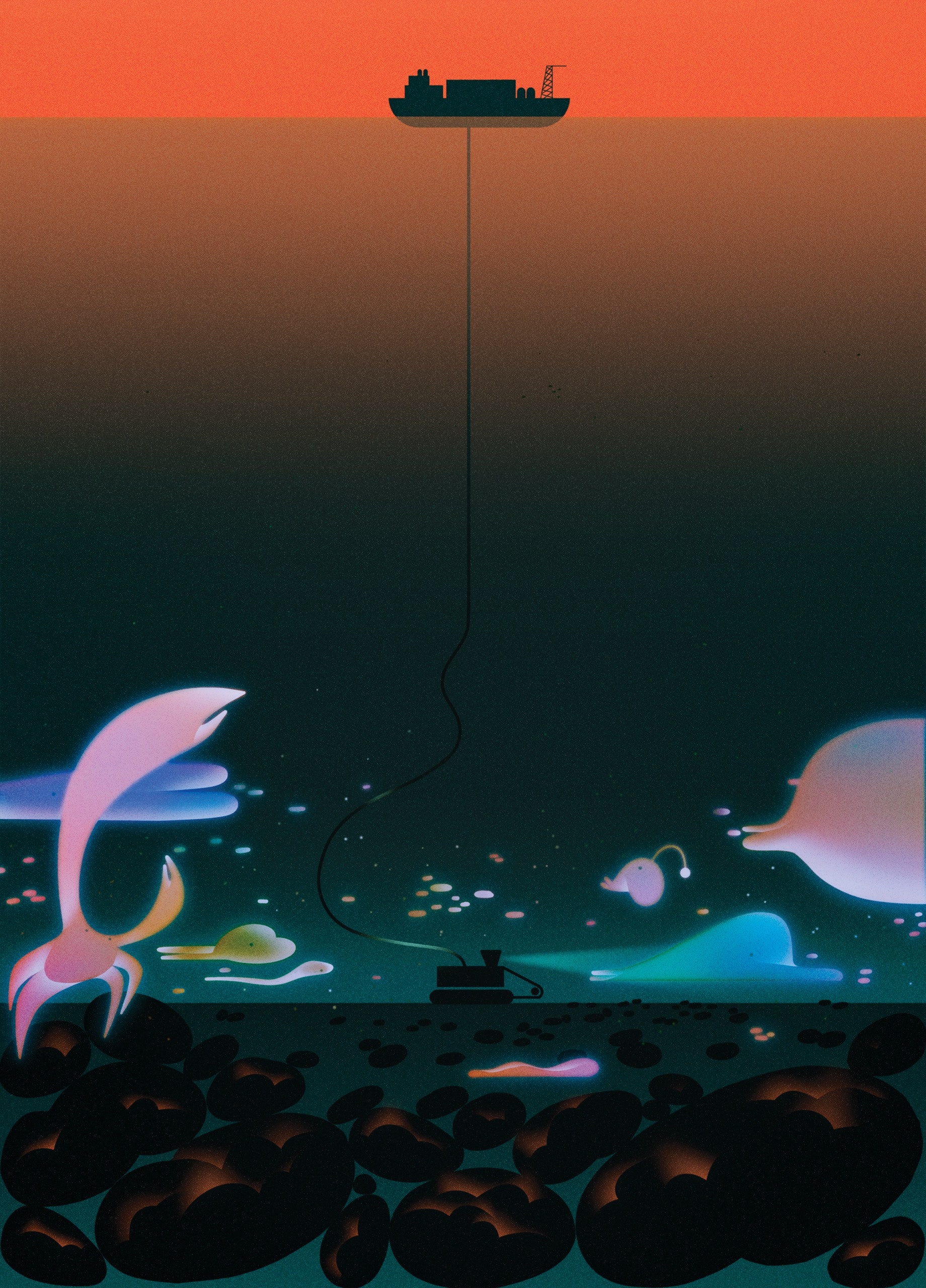 Within a few years, permits could be issued for commercial miners hoping to harvest the submerged wealth of the sea.
Illustration by Sophi Miyoko Gullbrants
From The New Yorker by Elizabeth Kolbert

We’ve barely explored the darkest realm of the ocean.
With rare-metal mining on the rise, we’re already destroying it.

The International Seabed Authority is headquartered in Kingston, Jamaica, in a building that looks a bit like a prison and a bit like a Holiday Inn.
The I.S.A., which has been described as “chronically overlooked” and is so obscure that even many Jamaicans don’t know it exists, has jurisdiction over roughly half the globe.

Under international law, countries control the waters within two hundred miles of their shores.
Beyond that, the oceans and all they contain are considered “the common heritage of mankind.”
This realm, which encompasses nearly a hundred million square miles of seafloor, is referred to in I.S.A.-speak simply as the Area.

Scattered across the Area are great riches.
Mostly, these take the shape of lumps that resemble blackened potatoes.
The lumps, known formally as polymetallic nodules, consist of layers of ore that have built up around bits of marine debris, such as ancient shark teeth.
The process by which the metals accumulate is not entirely understood; however, it’s thought to be exceedingly slow.
A single spud-size nugget might take some three million years to form.
It has been estimated that, collectively, the nodules on the bottom of the ocean contain six times as much cobalt, three times as much nickel, and four times as much of the rare-earth metal yttrium as there is on land.
They contain six thousand times as much tellurium, a metal that’s even rarer than the rare earths.

The first attempts to harvest this submerged wealth were undertaken nearly fifty years ago.
In the summer of 1974, a drillship purportedly belonging to Howard Hughes—the Hughes Glomar Explorer—anchored north of Midway Atoll, ostensibly to bring up nodules from the depths.
In fact, the ship was operated by the C.I.A., which was trying to raise a sunken Soviet submarine.
But then, in a curious twist, a real company called Ocean Minerals leased the Glomar to collect nodules from the seabed west of Baja California.
The president of the company likened the exercise to “standing on the top of the Empire State Building, trying to pick up small stones on the sidewalk using a long straw, at night.”

After the Glomar expeditions, interest in seabed mining waned.
It’s now waxing again.
As one recent report put it, “The Pacific Ocean is the scene of a new wild west.” Thirty companies have received permits from the I.S.A.
to explore the Area.
Most are looking to slurp up the nodules; others are hoping to excavate stretches of the ocean floor that are rich in cobalt and copper.
Permits to begin commercial mining could be issued within a few years. 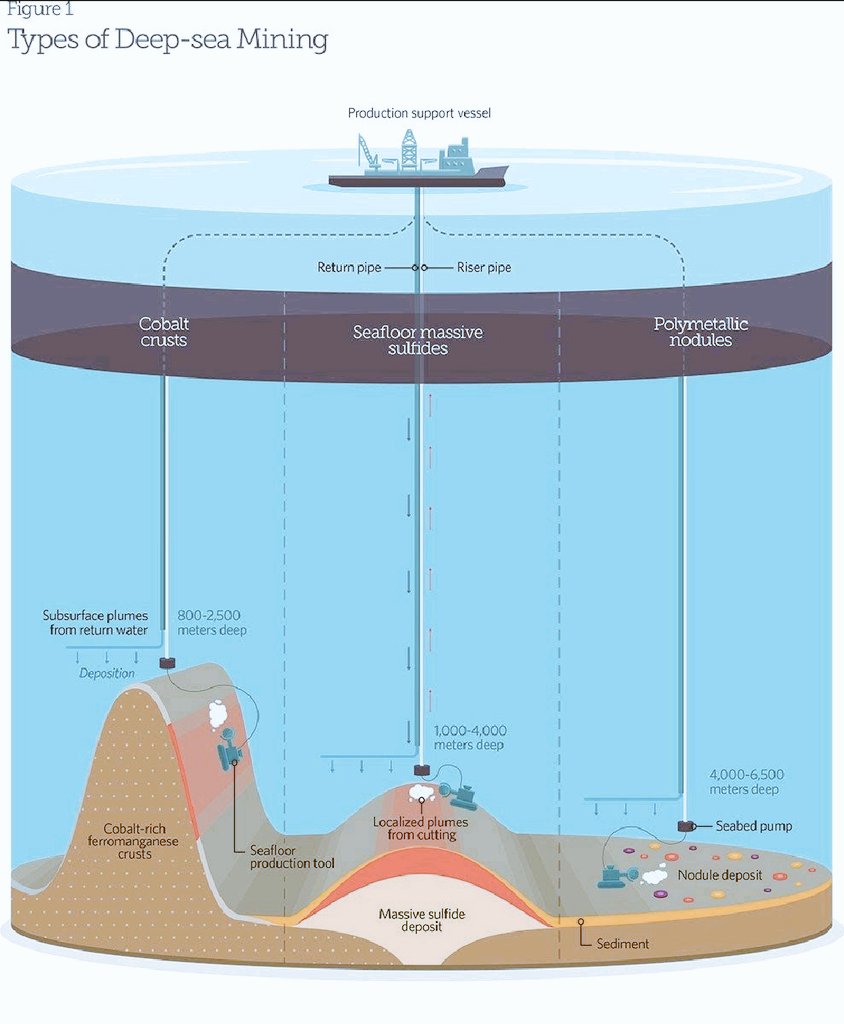 Proponents of deep-sea mining argue that the sooner it starts the better.
Manufacturing wind turbines, electric vehicles, solar panels, and batteries for energy storage requires resources, often scarce ones.
(Tellurium is a key component in thin-film solar panels.) “The reality is that the clean-energy transition is not possible without taking billions of tons of metal from the planet,” Gerard Barron, the chairman of the Metals Company, one of the businesses that holds permits from the I.S.A., observed a few months ago.
Seafloor nodules, he said, “offer a way to dramatically reduce” the environmental impact of extracting these tons.

But seabed mining poses environmental hazards of its own.
The more scientists learn about the depths, the more extraordinary the discoveries.
The ocean floor is populated by creatures that thrive under conditions that seem impossibly extreme.
There is, for example, a ghostly pale deep-sea octopus that lays its eggs only on the stalks of nodule-dwelling sponges.
Remove the nodules in order to melt them down and it will, presumably, take millions of years for new ones to form.

Edith Widder is a marine biologist, a MacArthur Fellow, and the author of “Below the Edge of Darkness: A Memoir of Exploring Light and Life in the Deep Sea” (Random House).
Widder is an expert on bioluminescence, a topic that she became interested in after nearly going blind.
In 1970, when she was a freshman in college, she had to have surgery for a broken back.
The surgery went fine, but afterward she started hemorrhaging.
Her heart stopped beating, and she was resuscitated.
This happened again, and then a third time.
Blood leaked into both of her eyes, blocking her retinas.
“My visual world was swirling darkness with occasional glimpses of meaningless light,” she recalls.
Eventually, she regained her vision, but she no longer took sight for granted.

The same goes for fish.
Only the top layers of the oceans are illuminated.
The “sunlight zone” extends down about seven hundred feet, the “twilight zone” down another twenty-six hundred feet.
Below that—in the “midnight zone,” the “abyssal zone,” and the “hadal zone”—there’s only blackness, and the light created by life itself.
In this vast darkness, so many species have mastered the art of bioluminescence that Widder estimates they constitute a “majority of the creatures on the planet.” The first time she descended into the deep in an armored diving suit called a wasp, she was overwhelmed by the display.
“This was a light extravaganza unlike anything I could have imagined,” she writes.
“Afterwards, when asked to describe what I had seen, I blurted, ‘It’s like the Fourth of July down there!’ ”

Bioluminescent creatures produce light via chemical reaction.
They synthesize luciferins, compounds that, in the presence of certain enzymes, known as luciferases, oxidize and give off photons.
The trick is useful enough that bioluminescence has evolved independently some fifty times.
Eyes, too, have evolved independently about fifty times, in creatures as diverse as flies, flatworms, and frogs.
But, Widder points out, “there is one remarkable distinction.” All animals’ eyes employ the same basic strategy to convert light to sensation, using proteins called opsins.
In the case of bioluminescence, different groups of organisms produce very different luciferins, meaning that each has invented its own way to shine.

The most obvious reason to flash a light in the dark is to find food.
Some animals, like the stoplight loosejaw, a fish with photon-emitting organs under each eye, use bioluminescence to seek out prey.
Others, like the humpback blackdevil, hope to attract victims with their displays; the blackdevil sports a shiny lure that dangles off its forehead like a crystal from a chandelier.

Bioluminescence also serves less straightforward functions.
It can be used to entice mates and to startle enemies.
The giant red mysid, a hamster-size crustacean, spews streams of blue sparkles from nozzles near its mouth; these, it’s believed, distract would-be attackers.
Some animals smear their pursuers with bioluminescent slime—the marks make them targets for other predators—and some use bioluminescence as camouflage.
This last strategy is known as counterillumination, and it’s used in the twilight zone, where many creatures have upward-looking eyes that scan for the silhouettes of prey.
The prey can adjust their glow to blend in with the light filtering down from above.

Since it’s so hard for humans to get to the deep sea—and, once there, to record what they’re seeing—Widder has spent much of her career trying to figure out ways to study bioluminescence remotely.
She’s developed special deep-sea cameras that rely on red light, which marine creatures mostly can’t detect.
Much of “Below the Edge of Darkness” is occupied with the travails of getting these cameras placed, a project that involves journeys so nauseating that Widder describes cycling through the five stages of seasickness.
In the fourth, she explains, “you’re afraid you’re going to die,” and in the last “you’re afraid you’re not.”

The experience that she really wants to convey, though, is not queasiness but wonder.
The creatures of the deep have been putting on the world’s greatest light show for tens of millions of years.
Widder thinks that if people could witness this spectacle—or even just be made aware of it—they’d pay a lot more attention to life at the bottom of the seas and the many hazards that threaten it.
These include but are not limited to global warming, ocean acidification, overfishing, agricultural runoff, oil spills, invasive species, bottom trawling, plastic waste, and seabed mining.

All marine photosynthesis takes place in the sunlight zone.
Beneath that, food is in such short supply that the occasional dead whale that falls to the ocean floor represents a major source of nutrients.
Nevertheless, even in the farthest recesses of the oceans, life finds a way.

The Mariana snailfish, as its name suggests, occupies the Mariana Trench—the ocean’s deepest depression—in the western Pacific.
It’s a few inches long and looks like a large, pale-pink tadpole.
The Mariana snailfish has been found more than twenty-six thousand feet below sea level, where the pressure is eight hundred times greater than at the surface.
To survive under such conditions, the snailfish has come up with various ingenious adaptations: its skull is not completely closed, its bones are unusually rubbery, and it produces special chemicals to prevent its proteins from denaturing under stress.
The creature can barely see and instead relies on fluid-filled chambers along its jaws, which detect the movements of small crustaceans known as amphipods.
Amphipods, for their part, have been collected from the very bottom of the Mariana Trench, almost thirty-six thousand feet down, where the pressure is so great that the animals’ shells, in theory at least, should dissolve.
A team of Japanese scientists recently reported that one deep-dwelling amphipod, Hirondellea gigas, protects its shell by coating it in an aluminum-based gel, produced from metal that it extracts from seafloor mud.