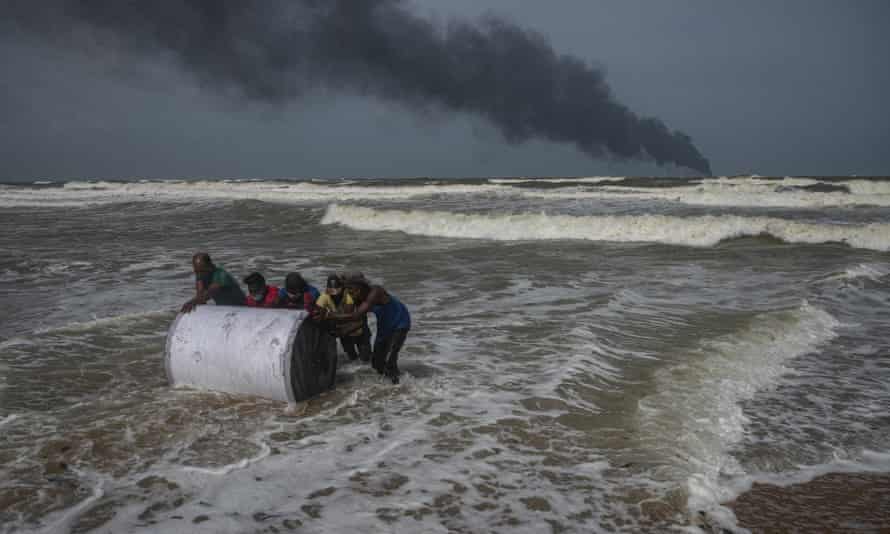 We must find a way to embrace shipping, the ocean and our place in the world without shackling ourselves to unpayable foreign debt

Growing up in Sri Lanka in the 1990s, it was drilled into me from an early age that my island was destined to be a maritime hub.
At school, I was taught that Sri Lanka was once the heart of the maritime Silk Road, a network of trade routes that connected the east and west from 130BC to the mid-1400s.

My textbooks were filled with tales about how Sri Lanka’s strategic positioning and rich natural resources were so prized that it was consecutively colonised by the Portuguese, Dutch and British empires for almost four centuries.

I had no reason to question this: sitting between China and the African continent, our teardrop island south of the Indian subcontinent looked to be at the geographical centre of international trade. 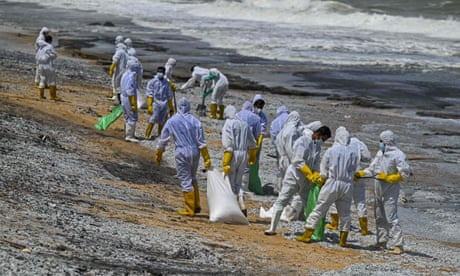 Sri Lanka faces disaster as burning ship spills chemicals on beaches
Then there was the urban legend that Lee Kuan Yew, the father of Singapore, visited a newly independent Sri Lanka in the 1950s, and declared that he would model his city-state after it.
Shortly afterwards Sri Lanka descended into civil war, while Singapore raced ahead, becoming a global maritime huband one of the busiest international ports in the world.
It was only because of the war, we were meant to believe, that Sri Lanka had not developed like Singapore.
We all grew up envisioning a newly prosperous Sri Lanka, a tropical paradise that was the natural hub of international shipping.

Establishing itself as a maritime centre remains at the heart of Sri Lanka’s geopolitical ambitions.
In the process, however, the country has become irreversibly indebted.
In 2010, it used loans from China to build Hambantota port.
In 2017, the Sri Lankan government defaulted on its loans and a majority stake in the port was leased to China for 99 years.
I cried as I watched the blazing fire, because of what it meant for my country and its stunning beaches and biodiversity

With the country carrying desperate levels of debt, and under extreme pressure to not only make a profit from the maritime industry but to also prove it has capable commercial shipping ports, it is not surprising that when a cargo ship approached Colombo port in May, and asked for permission to repair a dangerous chemical leak, the port authority obliged. 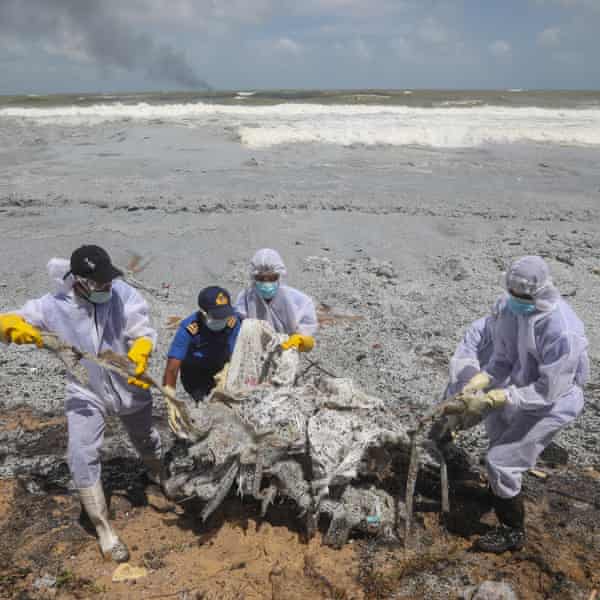 Sri Lanka navy personnel clear debris from the X-Press Pearl, which had 25 tonnes of nitric acid and other chemicals onboard.
Photograph: Chamila Karunarathne/EPA
According to a statement from the harbour master, Nirmal Silva, the ship – the Singapore-registered X-Press Pearl – gave the port a general notice on its arrival, then at anchor sought permission to repair the leak.

“Such reworking activities are not uncommon in the port of Colombo,” Silva stated.
“This is normal, especially in a hub port such as the port of Colombo.
It is a service not only in our port but also in other ports in general.
We must be ready to provide all these services available in the shipping industry as a trans-shipment hub.”

Several other countries, however, felt no such pressure to handle the compromised cargo.
Media outlets reported that the ship was denied entry at ports in Qatar and India prior to arriving in Sri Lanka.
This was later denied in an official statement by X-Press Feeders, the company that owned the ship.
Instead, the company indicated that these ports had not accepted the leaking cargo.

“Applications had been made to both ports to offload a container that was leaking nitric acid but the advice given was there were no specialist facilities or expertise immediately available to deal with the leaking acid,” the statement said.

Meanwhile, AFP News reported that the ship had told its local shipping agent of an acid leak onboard the vessel, but the agent had failed to alert local authorities.

The leak is thought to have caused a fire that has led to the worst maritime disaster in Sri Lanka’s history: a cargo ship filled with dangerous chemicals burning and sinking just off the island’s western coast.
The country is facing an oil leak that could devastate the fishing industry and coastal environment, as well as the threat of the dozens of highly toxic chemicals on board, some of which have yet to be catalogued, let alone recovered. 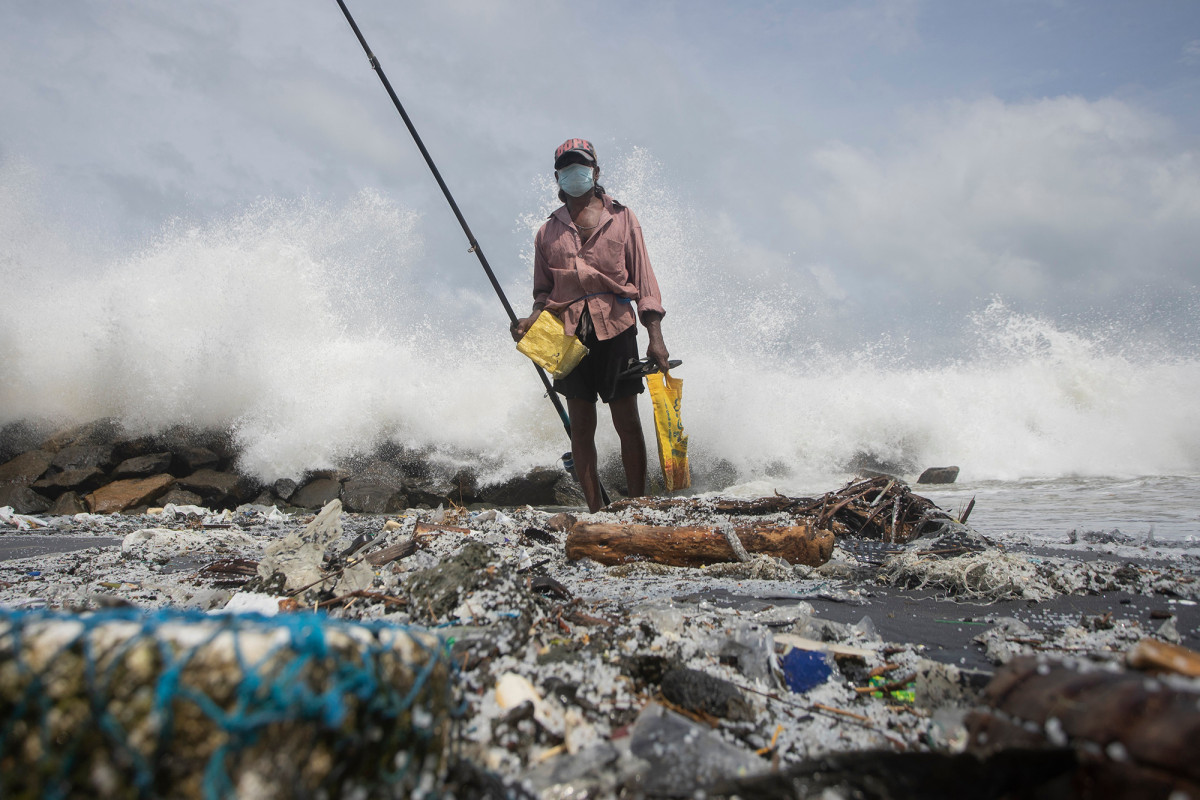 Sri Lankans face up to ‘unmeasurable cost’ of cargo ship disaster
From thousands of miles away in New York, I cried as I watched the blazing fire, because of what it meant for my country’s economy and its most valuable assets: its stunning beaches and unparalleled biodiversity.
I felt dread at the prospect of losing more ground to powerful countries in a geopolitical tug-of-war if this puts more pressure on Sri Lanka’s ailing economy.
Hopefully, the failures in oversight and accountability will serve as a vital learning experience and spur long-overdue environmental safeguards to prevent a repetition of this disaster.

But the disaster also harmed our collective dream of what we should be as a country.
Desperate to prove ourselves at any cost in the service of our self-identity – and with the vast debt that we have incurred to secure that identity – Sri Lanka has been handed a bill for more than just the clean-up.
It has suffered a blow to its reputation as an emerging maritime hub.

Whether this disaster will also be the moment when Sri Lanka stops shackling itself with unpayable debts and teaches a different vision to its children – one that accepts that Sri Lanka is not Singapore, but a country that embraces the ocean’s wonders rather than treating it like a dumping ground – time will tell.
Links :
Posted by geogarage at 1:56 AM