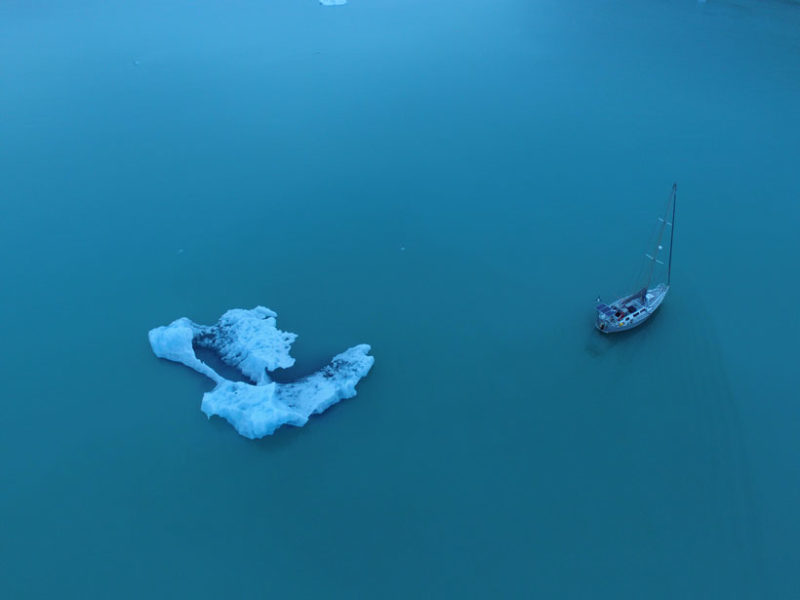 Exiles, whose crew collected data on fjords in the Arctic, anchors near a receding glacier in 2017.
Credit: Daniel Carlson
From EOS by Andrew Chapman

A new study demonstrates the benefits of crowdsourcing science using sailboats to better understand the impact of melting sea ice in the Arctic.


In June 2017, Nicolas Peissel led the 13-meter sailboat Exiles out of port in St. John’s, Newfoundland and Labrador, Canada.
The vessel sailed north to Greenland and into the remnants of Tropical Storm Cindy.
Peissel and several other crew members are aid workers for Doctors Without Borders, but they were on a 3-month scientific—not medical—expedition aboard Exiles.

The expedition explored the feasibility of crowdsourced science using sailboats to expand data collection in fjords affected by the melting Greenland Ice Sheet.
Daniel Carlson, an oceanographer at Germany’s Helmholtz-Zentrum Hereon and science officer for the expedition, sailed on Exiles for a month.
After he left, the crew of nonscientists continued collecting data.
The expedition log and preliminary results were published in April in Frontiers in Marine Science.
“Since you’re spending so much money on a research cruise, there’s usually a push to visit as many fjords as possible. But with the sailboat, you’re able to just stop and investigate things you find interesting.”
The melting ice in Greenland is increasing the amount of fresh water in fjords, which changes the salinity and mixing of ocean water.
Scientists don’t fully know what impact these changes will have on the marine ecosystem.

To study the contribution of meltwater in the ocean, scientists measure the conductivity, temperature, and depth (CTD) of the water column, but reaching these remote fjords to take measurements on research ships is expensive and treacherous.
Ships also often carry several research teams with conflicting experimental needs and schedules.
These limitations leave gaps in our understanding of the changing Arctic waters.

“Since you’re spending so much money on a research cruise, there’s usually a push to visit as many fjords as possible,” Carlson said, “but with the sailboat, you’re able to just stop and investigate things you find interesting.”
Sailboats also require much less fuel, lessening the environmental impact of Arctic research.

Together, the Exiles crew made 147 CTD measurements.
Carlson also took aerial photographs of icebergs with a drone to estimate the rate at which they melt.
He said this wouldn’t have been possible on a research cruise with tight schedules and timelines.

Crowdsourcing Science in the Arctic

Caroline Bouchard, a fisheries scientist at the Greenland Institute of Natural Resources who wasn’t involved in the study, also uses sailboats for Arctic research.
She appreciates their affordability and versatility and would like to see more people with sailboats taking part in research.
“It’s not like you can just make your own thing—you need the instruments—but I think there would be interest from citizen scientists,” Bouchard said. 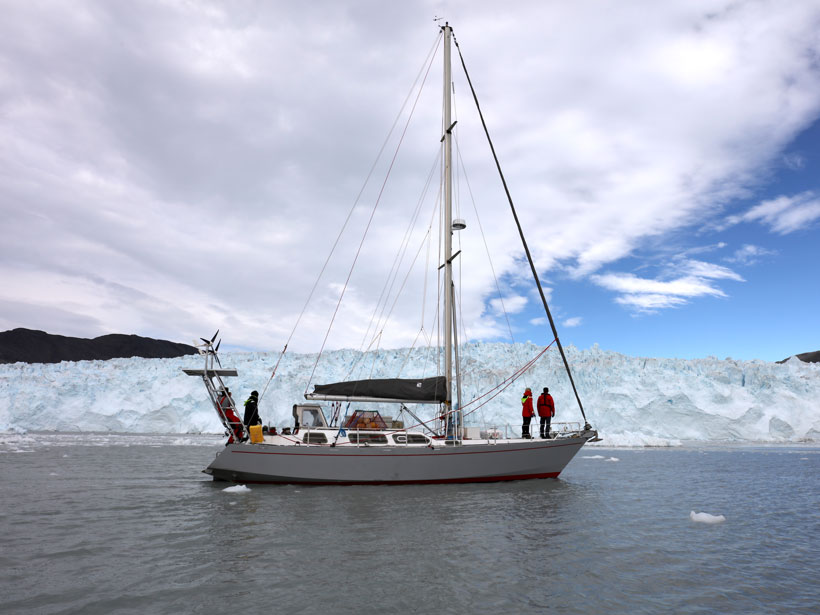 Exiles sails past the Eqi Glacier in Greenland.
Credit: Daniel Carlson
Although it takes experienced sailors to navigate in the Arctic, more sailboats than ever have been heading north, which could bring new opportunities for amateur scientists.
Peissel said sailors in the Arctic usually have an intense connection to the sea and nature.
“These are the people who are more than likely to say ‘Hey, why don’t you put your instruments on board.’”

Following their study’s success, Carlson and Peissel are planning another expedition to the Arctic in 2022.
“The scientific discipline, just like humanitarianism, does not uniquely belong to the scientist or the humanitarian,” Peissel said.
“Scientific work was historically, and should continue to be, undertaken by members of the general public.”
Links :
Beta test of crowdsourced bathymetry holds ... / NOAA announces launch of crowdsourced ...
Posted by geogarage at 1:14 AM