Giant kite will pull a ship across the ocean next month

A rendering of an Airseas Seawing being deployed.
Gif: Airseas
From Gizmodo by Molly Taft

A boat being propelled by the wind may sound familiar, but next month's test could help the shipping industry in its quest to clean up carbon emissions.

Starting in January, a huge boat will attach itself to an enormous kite in a first-of-its-kind test to try and alleviate harmful carbon emissions from toting stuff to and fro across the high seas.

Emissions from shipping are a huge problem.
About 80% of all the world’s goods are transported on around 50,000 ships, which use a particularly dirty fuel known as “bunker fuel.”
It’s estimated that this cheap fuel is responsible for more than 2% of global carbon emissions, and between 10% to 15% of the world’s sulfur oxide and nitrous oxide emissions, both major public health menaces.
Seawing is an automated kite designed to tow commercial ships using the unlimited, free and renewable power of the wind.
Our first system, built for our partner and early customer Airbus, was installed in December 2021 on a first commercial vessel. It took only 12 hours to lift and seafast Seawing on Louis Dreyfus Armateurs' Ville de Bordeaux.
Enter the humble kite.
The parafoil kite that will be used is made by a company called Airseas.
It measures around 5,380 square feet (500 square meters) andwill be attached to a ship 505 feet (154 meters) in length called the Ville de Bordeaux.
The ship is a “roll on/roll off” vessel, which refers to the fact that these ships usually carry wheeled cargo.
(The shorthand term for this type of ship is, incredibly, a “Ro-Ro.”)
This particular boat carries airplane parts between France and the U.S.
The ship will test out the sail—er, sorry, kite—technology for six months before being used for its regular route.

Airseas said it “was founded out of the need to act urgently for our planet and climate” and is “committed to provide all ships with the means to harness free and unlimited wind energy.” That sounds an awful lot like a fancy way of saying “sailing,” which, in case you were unaware, is something we used to use a lot back in ye olden days to get our stuff around.

It’s important to note that unlike the cargo sailing ships of old that relied on their big sails, the Airseas kite isn’t meant to be the sole source of power for ships.
The Ville de Bordeaux will still use its engine.
But the kite, which Airseas calls a Seawing, is meant to reduce fuel use on the journey.

Airseas has promised a super-sized version of the Seawing that measures 3,280 square feet (1,000 square meters) and flies 984 feet (300 meters) above the boat on a figure-8 track, has the potential to reduce emissions on shipping trips by up to 20%.
Computer technology helps the kite move around to maximize the carbon-free wind energy being used to propel the ship. 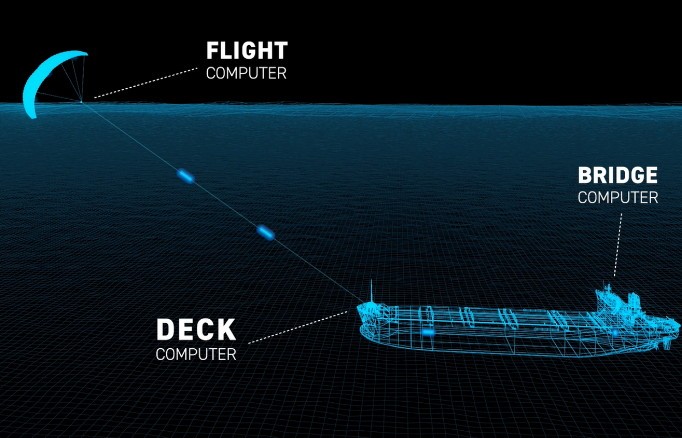 A 20% cut to emissions might sound small, but the shipping industry has been really struggling to figure out how to clean up its act.
Some of the alternative fuels that the industry has developed that are intended to lower emissions have raised new environmental questions.
Shipping products for just four companies alone—Amazon, Walmart, Target, and IKEA—accounted for 20 million tons of carbon dioxide equivalent over the past two years being dumped into the atmosphere.
Emissions could rise even more sharply in the coming decades;some analyses predict that cargo volumes could grow by as much as 130% by 2050 as online shopping becomes more and more popular.

Simply buying less stuff might be one of the best options, but obviously that’s a lot harder on a larger scale than attaching an enormous kite to a boat.
In lieu of larger-scale solutions, if that big kite is going to help cut emissions, even just a little, fly away, sailors.