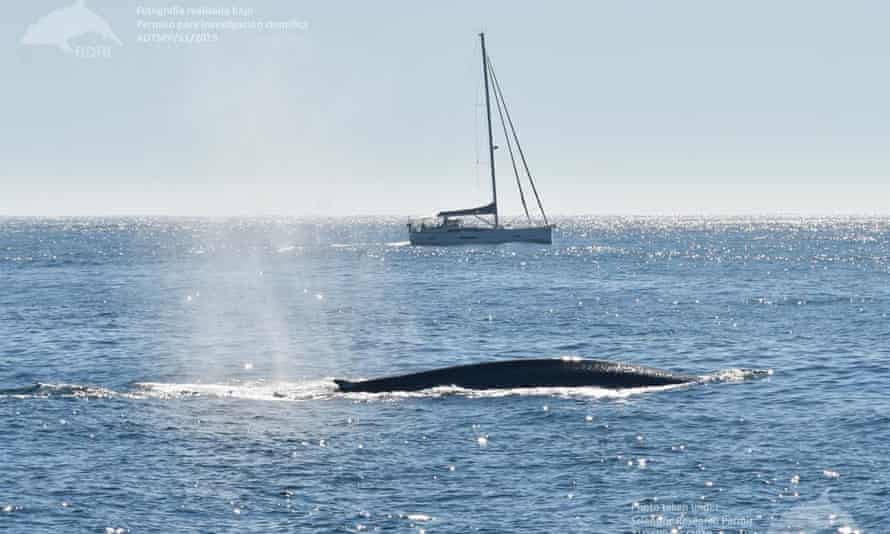 The creatures may have returned to Galicia out of a form of homesickness, or ancestral memory.
Photograph: Bottlenose Dolphin Research Institute

From The Guardian by Stephen Burgen

Blue whales, the world’s largest mammals, are returning to Spain’s Atlantic coast after an absence of more than 40 years.

The first one was spotted off the coast of Galicia in north-west Spain in 2017 by Bruno Díaz, a marine biologist who is head of the Bottlenose Dolphin Research Institute in O Grove, Galicia.

Another was spotted in 2018, another the following year, and then in 2020 they both returned.
Just over a week ago a different specimen was sited off the Islas Cíes, near O Grove.

Díaz said it was not yet clear whether the climate crisis was leading the creatures to change their habits and return to an area where they were hunted almost to extinction.

“I believe the moratorium on whaling has been a key factor,” he said.
“In the 1970s, just before the ban was introduced, an entire generation of blue whales disappeared.
Now, more than 40 years later, we’re seeing the return of the descendants of the few that survived.”

Dolphins playing with a blue whale off Galician coast (NW Spain).
Our research team was recently lucky to caught what we described as an "incredibly magic aquatic moment" when a group of common dolphins start to ride a blue whale.
Riding a whale may serves multiple purposes for dolphins, but that does not preclude dolphins having fun also.
By showing these beautiful moments with all of you, our aim is to encourage our governments to apply conservation measurements and adequate management of human activities in these waters.

There was a centuries-old whaling industry and a dozen whaling ports in Galicia.
Spain did not ban whaling until 1986, by which time the blue whale was all but extinct in the region.

However, not everyone sees the whales’ return as good news.

“I’m pessimistic because there’s a high possibility that climate change is having a major impact on the blue whale’s habitat,” Alfredo López, a marine biologist at a Galician NGO that studies marine mammals, told the newspaper La Voz de Galicia.

“Firstly, because they never venture south of the equator, and if global warming pushes this line north, their habitat will be reduced.
And secondly, if it means the food they normally eat is disappearing, then what we’re seeing is dramatic and not something to celebrate.”

Díaz speculates that the creatures may also have returned to Galicia out of a form of homesickness, or ancestral memory.

“In recent years it’s been discovered that the blue whale’s migration is driven by memory, not by environmental conditions,” he said.
“This year there hasn’t been a notable increase in plankton, but here they are.
Experiences are retained in the collective memory and drive the species to return.”

Researchers believe this type of folk memory, or cultural knowledge, exists in many species and is key to their survival.