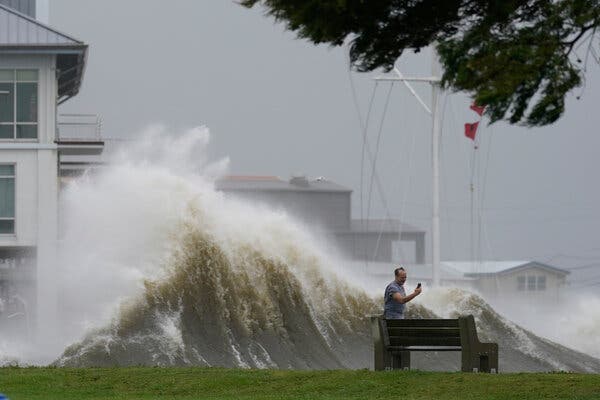 Researchers have found that the frequency of rapidly intensifying Atlantic hurricanes has increased over the past four decades as ocean temperatures have risen, in large part because warmer water provides more of the energy that fuels these storms.

Hurricane Ida, which struck the Louisiana coast on Sunday with winds of 150 miles an hour, gained power faster more than most storms.
Because of climate change, such rapid strengthening is happening more often as hurricanes pick up more energy from ocean water that is warmer than before.

But in a summer of extreme weather, Ida’s intensification was extreme.

According to the National Hurricane Center’s forecast bulletins, the storm’s maximum sustained winds as of Saturday morning were about 85 m.p.h., making it a Category 1 hurricane.
Less than 24 hours later they were 65 m.p.h. stronger, bringing Ida close to a Category 5.

The storm intensified more than the hurricane center’s forecast, which had called for maximum winds reaching 140 m.p.h.
The hurricane center’s definition of rapid intensification is at least a 35 m.p.h. increase in wind speed in 24 hours.
Ida strengthened that much in just six hours overnight.

Climate change is part of the reason.
Researchers have found that the frequency of rapidly intensifying Atlantic hurricanes has increased over the past four decades as ocean temperatures have risen, in large part because warmer water provides more of the energy that fuels these storms.
In the 1980s, there was about a 1 percent chance that a hurricane would undergo rapid intensification. Now, there’s a 5 percent chance.

But experts who study the behavior of hurricanes said other factors played a role with Ida, including seasonal warming of the Gulf of Mexico, the amount of moisture in the atmosphere and the presence or absence of winds that can affect the structure of a storm.

Right now the Gulf is extremely warm because it accumulated heat throughout the summer.It’s this seasonal warming, which happens in the Atlantic Ocean as well, that makes mid-August through October the most active part of the hurricane season every year.

But it’s not just the surface temperature of the Gulf that’s important, said Joshua Wadler, a researcher with the University of Miami and the National Oceanic and Atmospheric Administration.
Hurricanes actually cool the ocean as they travel across it, because they stir up the water down to about 150 feet, mixing in colder water from below.

In this case, Ida traveled across water that was much warmer down to that depth.
Probes sent into the water by hurricane hunter aircraft on Saturday revealed that the temperature, after it had been mixed by Ida, was about 30 degrees Celsius, or 86 degrees Fahrenheit, Dr. Wadler said.
“That’s on the very high end of sea surface temperatures that hurricanes ever experience,” he said.

The storm’s path happened to track over this warm water, what scientists call an eddy, said Chris Slocum, a NOAA researcher.
“Ida found the perfect path across the gulf, where the warmest water is,” he said, and that provided plenty of energy for the storm to extract.
“You could say it’s a worst-case scenario.”

Dr. Slocum compared the situation to that of Katrina, in 2005, which crossed a cooler water column as it neared Louisiana, weakening from a Category 5 to a Category 3. Ida did not encounter any cooler water.
“This one is continuing the upward trend,” he said.
“The only thing that’s going to stop the intensification process is landfall,” he said.

Eddies occur in the Gulf every year, formed when part of a looping current breaks off, Dr. Wadler said. And while it’s extremely difficult to link a specific one to climate change, this one “is as deep as we’ve seen in a very long time,” he said.

While ocean temperatures are most important, two other factors affect how much and how quickly a storm strengthens, Dr. Slocum said.

Atmospheric moisture affects the thunderstorms that make up a tropical cyclone.
The more humid the air, the more these storms will survive and persist.
And the way these thunderstorms interact with each other, particularly at the eye of the storm, can affect whether it strengthens or weakens. 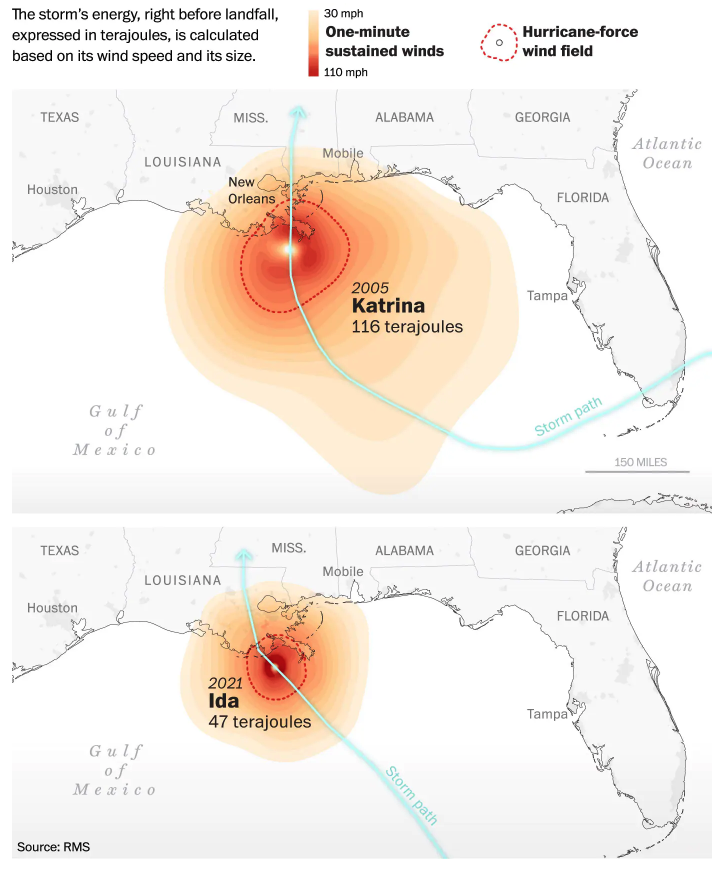 Wind shear — changes in wind speed and direction with height in the atmosphere — can also affect the structure of a hurricane.
If the wind shear is too strong, “you can tear a storm apart,” Dr. Slocum said.
The hurricane center’s forecasters had been watching wind shear closely.It had been a factor as the storm entered the Gulf on Friday, giving Ida an asymmetric structure.
But the shear dissipated on Saturday, allowing the storm to assume a more regular spiral shape.
The effect on wind speed can be likened to what happens with figure skaters during a spin.
Skaters who keep their arms in a tight, precise position will rotate faster.
But if one of their arms is extended, they’ll rotate much more slowly.
Forecasting whether a hurricane will intensify rapidly can be difficult, Dr. Slocum said.
“It’s kind of a Goldilocks problem,” he said.
“If one of these ingredients is a little bit off, we’re not going to see it.”
Links :
Posted by geogarage at 1:51 AM