A 3,700-Mile sailing trip shows why strict quarantine is failing

New Zealand has one of the strictest Covid-19 border restrictions with many quarantine hotels booked out.
Two Kiwis have found a different way to get home.

From Bloomberg by Angus Whitley, Ainsley Thomson & Jinshan Hong
Stuck in Tahiti with no available flights, Paul Stratfold was running out of time to get back home to Australia and renew his residency visa.
The Briton decided his best option was to sail 6,000 kilometers (3,700 miles) across the southern Pacific Ocean, a solo voyage that took almost a month.
A professional sailor, the 41-year-old had done nothing of this magnitude before.
Stratfold’s 50-foot yacht was battered by a storm for two days and he slept no more than 40 minutes at a time to reduce the risk of collisions.
“It was the only way I could get home,” he said in an interview.
He reached Southport in Queensland on July 3.

Desperate journeys like this, along with tales of tragedy and separation, are increasingly common as the pandemic wears on, especially where governments persist with hardline quarantines and border controls.
Nearly two years into this crisis, tens of thousands of frustrated citizens of nations such as Australia and New Zealand remain stranded overseas, unable to secure flights back to their homelands and one of the few slots allocated for compulsory hotel quarantine.
Mandatory quarantines helped insulate so-called Covid Zero nations from the worst of the pandemic by keeping out the virus.
But as other parts of the world start to move on and reopen, maintaining these costly systems is becoming less tenable, and cracks are starting to show.

Under siege from an outbreak of the delta variant after a single case evaded its border curbs, Australia has repeatedly slashed its quarantine quota, with fewer than 3,000 overseas arrivals allowed in each week.
That’s for a nation of 25 million known for its widespread diaspora.
New Zealand’s hotel quarantine system has been derided as demand outstrips supply, a problem exacerbated by a freeze on room releases during the current lockdown, also sparked by a delta incursion.
‘Washing Out’

One of the few places to avoid a delta outbreak, Hong Kong still requires people coming from the U.S. and U.K. to quarantine in a hotel room for 21 days, even if they’re fully vaccinated.
A lack of affordable options has resulted in a mad rush for beds.
Some who can’t stomach three weeks in isolation are flying in via countries deemed as lower risk to reduce their quarantine time. 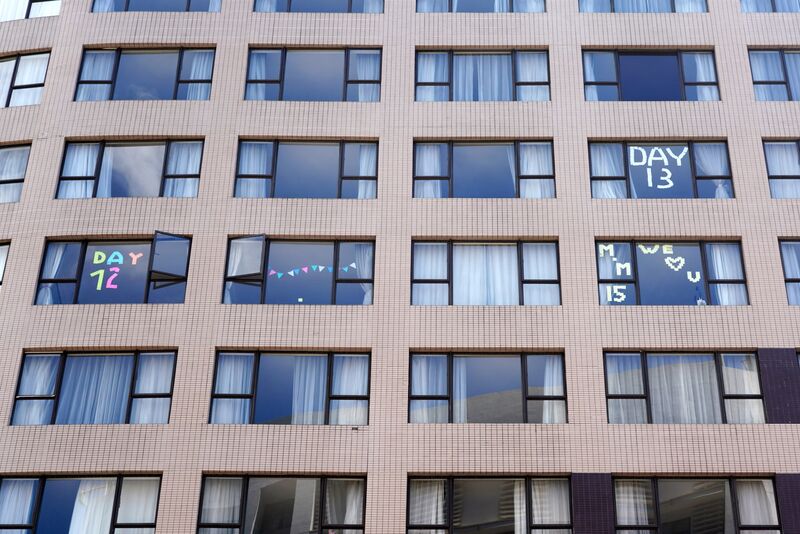 ‘Day 12’ and ‘Day 13’ stickers displayed on the windows of a quarantine hotel in Hong Kong on Aug. 17.
Photographer: Zhang Wei/China News Service/Getty Images
After finishing his studies in London, David Deka adopted this approach -- known as “washing out” -- when Hong Kong abruptly suspended all passenger flights from Britain throughout July.
He spent three weeks in Serbia, which still had flights to Hong Kong as it was deemed lower risk.
While he was there, the only connection to Hong Kong was suspended too.

“It was stressful,” Deka said.
“I thought anything that I do, Hong Kong will do something to stop me from coming back.”

He eventually got back to Hong Kong, where he still had to quarantine in a hotel for 14 days.
Deka said he met dozens of people in Serbia who had traveled from India, which was on several blacklists due to its rampaging outbreak, to “wash out” before heading to places such as the U.S. and Canada. 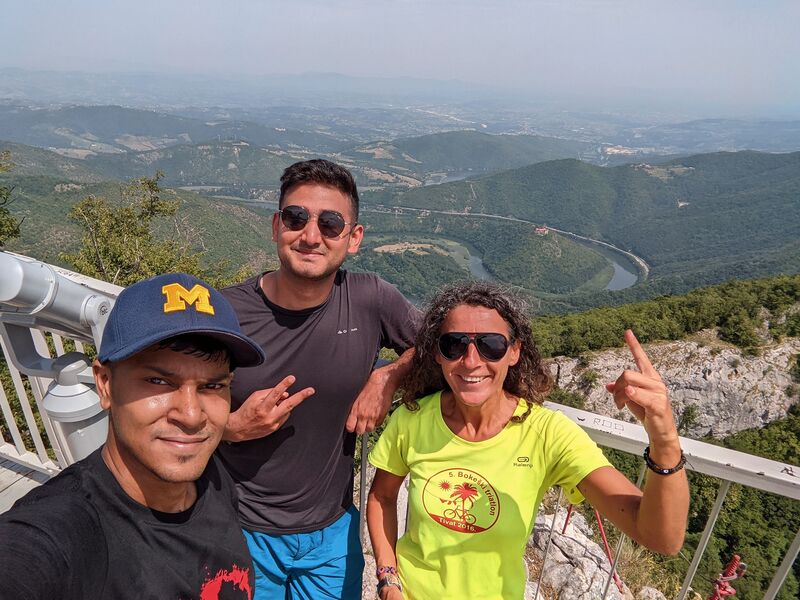 The lengths taken are in stark contrast to many other parts of the world, where vaccinations are ticking higher and border restrictions are easing, or were never really imposed at all.

Locking down countries and eliminating the virus domestically should only be a stop-gap measure until vaccination rates increase, according to immunologist Graham Le Gros, director of the Malaghan Institute of Medical Research in Wellington, New Zealand.

“Elimination has run its course,” he said.
“It’s destroying the fabric of society.”

Up in arms at their inability to return to dying relatives, tend to businesses, or just come home for Christmas, some people are fighting back.

A pregnant New Zealander became one of the most high-profile challengers to the country’s quarantine model.
Bergen Graham, 33, was living with her husband in his home country of El Salvador when she became pregnant in February.
Her tourist visa expired, so she went to Los Angeles and started trying to get home.

Classed as medically high-risk, Graham applied six times for a place in New Zealand’s quarantine system, according to her lawyer Frances Joychild.
All failed.

The situation changed almost immediately when Joychild filed a lawsuit against the government, claiming the quarantine system breached New Zealand’s Bill of Rights Act, a law that states every citizen has the right to enter the country.

“The government were on the phone the next day wanting to settle,” Joychild said in an interview.
“They offered her a place.” Graham and her husband landed in Auckland on Sept.
16 and headed into quarantine.

While Graham dropped her case as part of the settlement, she’s opened a potential pathway for others.
Joychild has been flooded with calls and emails from New Zealanders seeking to challenge the process in the same way.
“A class action is a possibility,” she said.

Grounded Kiwis, a network of more than 3,500 New Zealanders worldwide impacted by the policy, is also weighing legal action.
“This is causing too much suffering,” said spokesman Samuel Drew.

The stage is set for quarantine shakeups across Asia, the region most actively deploying border regimes that ensured fewer deaths but are leaving countries increasingly isolated the longer they persist.
Opposition is growing as the once water-tight systems struggle to keep out the more transmissible delta.
The latest virus outbreak in China, a leading proponent of Covid Zero, was likely seeded by a returnee who tested positive after 21 days of quarantine.

New Zealand’s chief ombudsman, Peter Boshier, said last month he was considering a review of the quarantine regime after a surge of complaints.
In a video message to expatriates this month, Australia’s Prime Minister Scott Morrison acknowledged the heartbreak many had suffered.

Arrivals to New Zealand typically stay for 14 days in one of about 30 facilities dotted across the country.
For those who then depart New Zealand within 180 days, quarantine costs NZ$3,100 ($2,200).
The system’s booking websitesaw 19,600 daily visitors in early August.
Grounded Kiwis said only 200 quarantine rooms are released every day, equating to a 1% chance of success.

Some 45,000 people overseas want to return to Australia, the government says.
They’re increasingly helpless because international arrivals into the country’s airports are capped at just 2,286 a week, a number that has shrunk as delta cases spiraled.
The weekly limit into Sydney was halved to 756 passengers this month.

Morrison says he wants to introduce home quarantine for returning Australians who are fully vaccinated.
While a trial is underway in the state of South Australia, and another will start shortly in New South Wales, a transition away from hotels will only come once Australia’s vaccination rate passes 70% or even 80%, according to the prime minister. 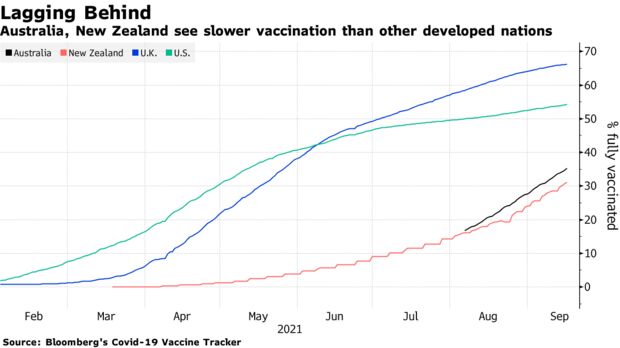 Hotel quarantine is clearly losing relevance.
It served as Australia’s primary detector of infections last year, before delta sent much of the country into lockdown.
But these days, the vast majority of new cases are in the community.
Just 16 of more than 9,000 cases in New South Wales in the past week came from overseas. 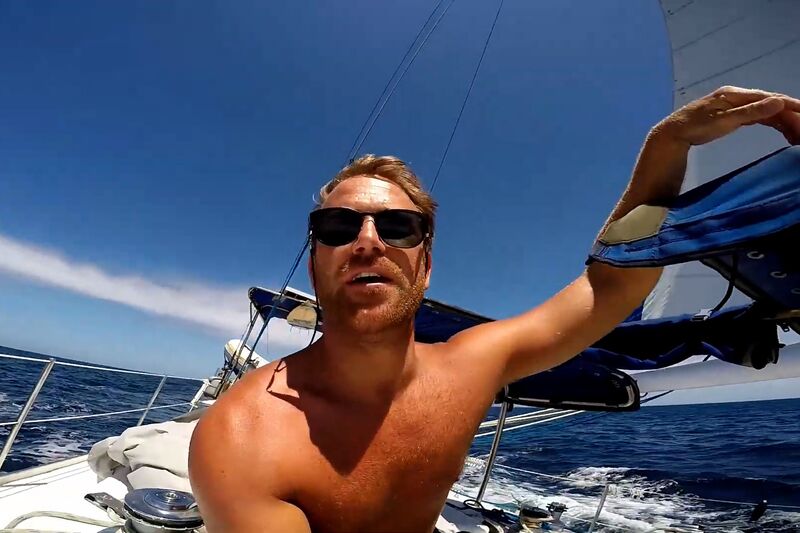 Eric Blackwell sailing in Indonesia in August.
Source: Eric Blackwell
For some, the solution is to avoid quarantine altogether.
Eric Blackwell, 30, and Tim Wright, 28, are sailing back to New Zealand from Indonesia on a 47-foot yacht.
Provided they test negative for Covid-19 on arrival, they won’t have to quarantine after the six-week voyage as long as it’s been 14 days since their last port of call.

While the trip is chiefly an adventure for the two out-of-work pilots, they’re taking a couple with them who were in Bali and couldn’t secure quarantine slots.

“There are a lot of people struggling to get home,” Blackwell said in a video interview from their boat, Kiwi Summers.
“I wouldn’t even try to fly.”

Fellow sailor Stratfold, who is fully vaccinated, wasn’t so lucky.
Unable to secure an exemption from quarantine after making landfall in Australia, he had to isolate in a nearby hotel for 14 days, at a cost of almost A$3,000 ($2,200).

“To go through all this hardship and expense is just ridiculous,” he said.
“How could anyone have Covid after 26 days alone on a boat?”
Links :
Posted by geogarage at 1:41 AM