The Mantis shrimp inspires a new material—made by bacteria 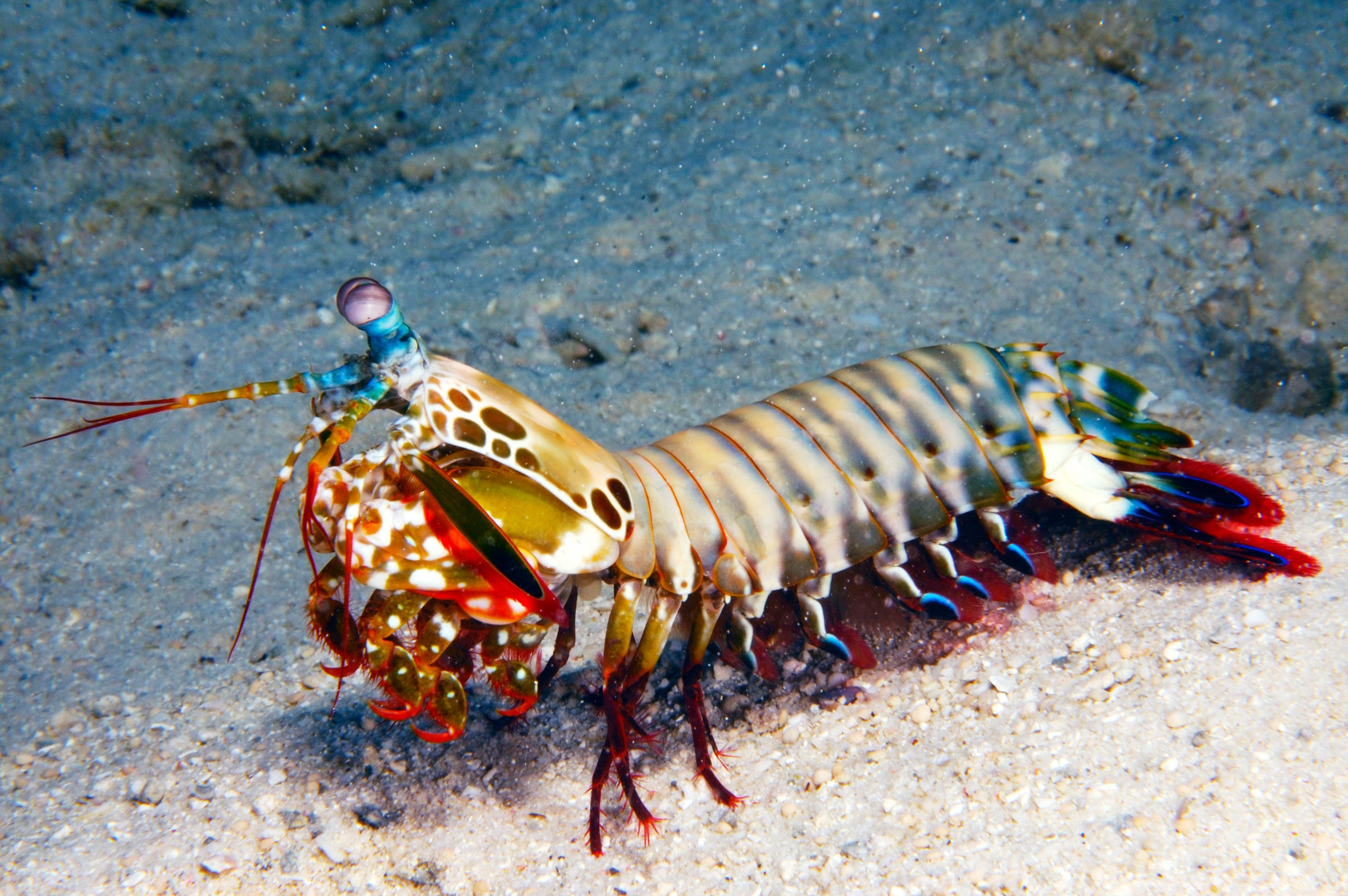 Photograph: Getty Images
From Wired
By 3D-printing scaffolds and dipping them in microbe juice, scientists make robust structures that could one day lead to self-growing roads.

To humans, the mantis shrimp is known as the “thumb splitter,” due to its propensity to punch the digits of unfortunate fishers.
To its prey on the seafloor, the mantis shrimp is known as “death incarnate”—the crustacean cocks back its two hammer-like appendages under its face, releasing them with such force that they obliterate clam shells, one of the toughest materials in nature.
The mantis shrimp has even more fun with crabs, strategically blowing off their claws first so the prey can’t defend itself.
All that bashing puts serious stress on the hammers themselves.
So to deal with the constant punching, evolution gave the material of these weapons a “Bouligand” shape.
Instead of the layers of material neatly stacking one on top of another, the layers are twisted, almost like the helical structure of DNA.
So when a mantis shrimp’s hammer smashes into a thumb or a clam or a crab’s face, any crack in its structure will propagate in a twist pattern, dissipating the energy throughout the material.
As a result, the hammer doesn’t snap in half.
Neat, said engineers at the University of Southern California and the University of California, Irvine, who’ve invented a clever kind of material based on the mantis shrimp’s clobber-sticks.
(If you’re one for formal terminology, they’re called dactyls.) It’s a twist within a twist: They’ve been able to get minerals to grow within a 3D-printed shrimp-inspired Bouligand structure with the help of bacteria, of all things. 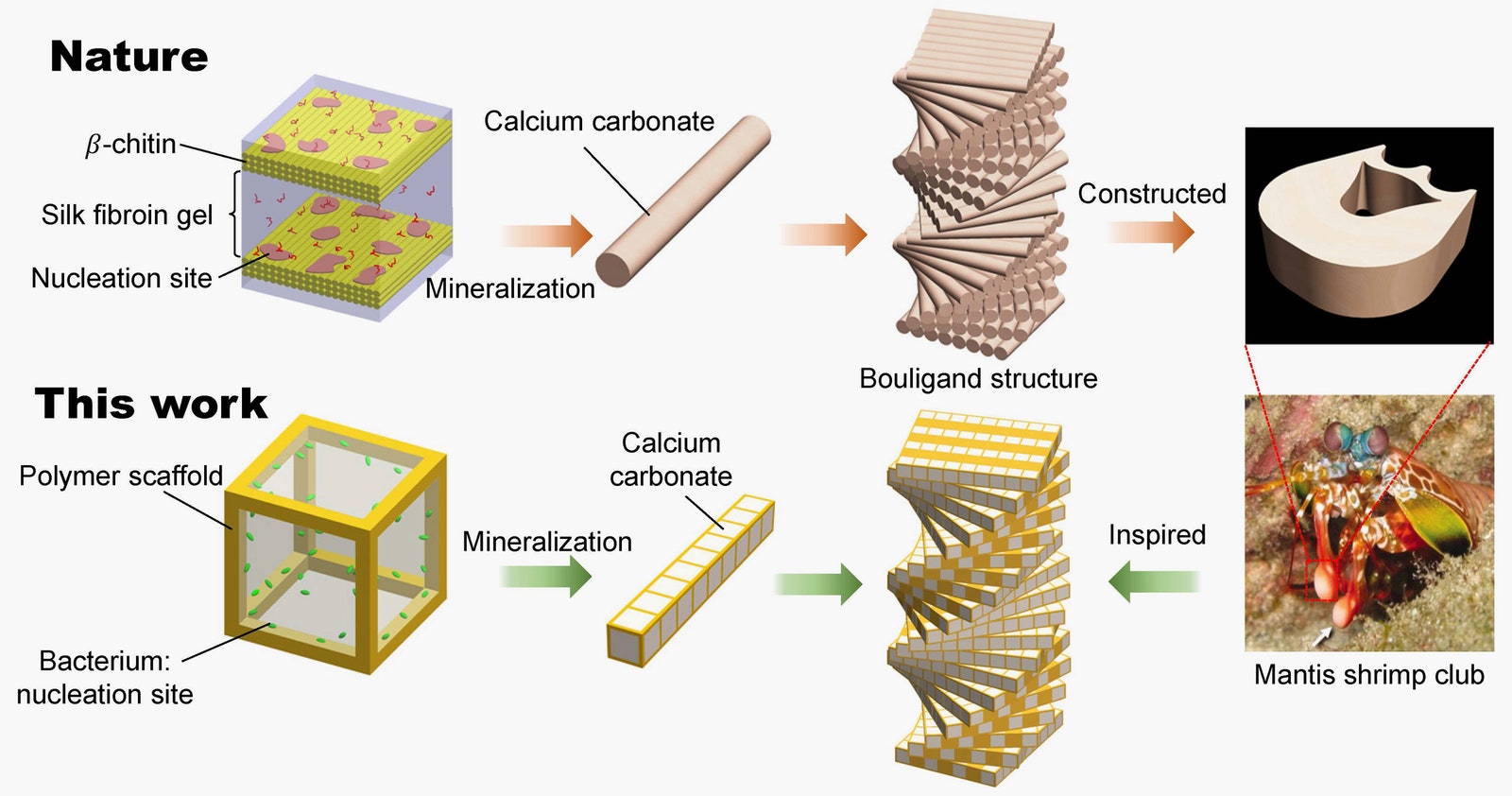 Courtesy of Qiming Wang
The researchers began by 3D-printing a simple lattice structure, basically a grid, out of a polymer.
As you can see in the image above, the resulting scaffold had plenty of empty space within—think of it as being like the beams that support a building.
They then dipped the whole structure in a bacterial solution and let it sit for 12 to 24 hours.
The Sporosarcina pasteurii bacteria in the solution attached to the polymer lattice and started secreting an enzyme called urease. 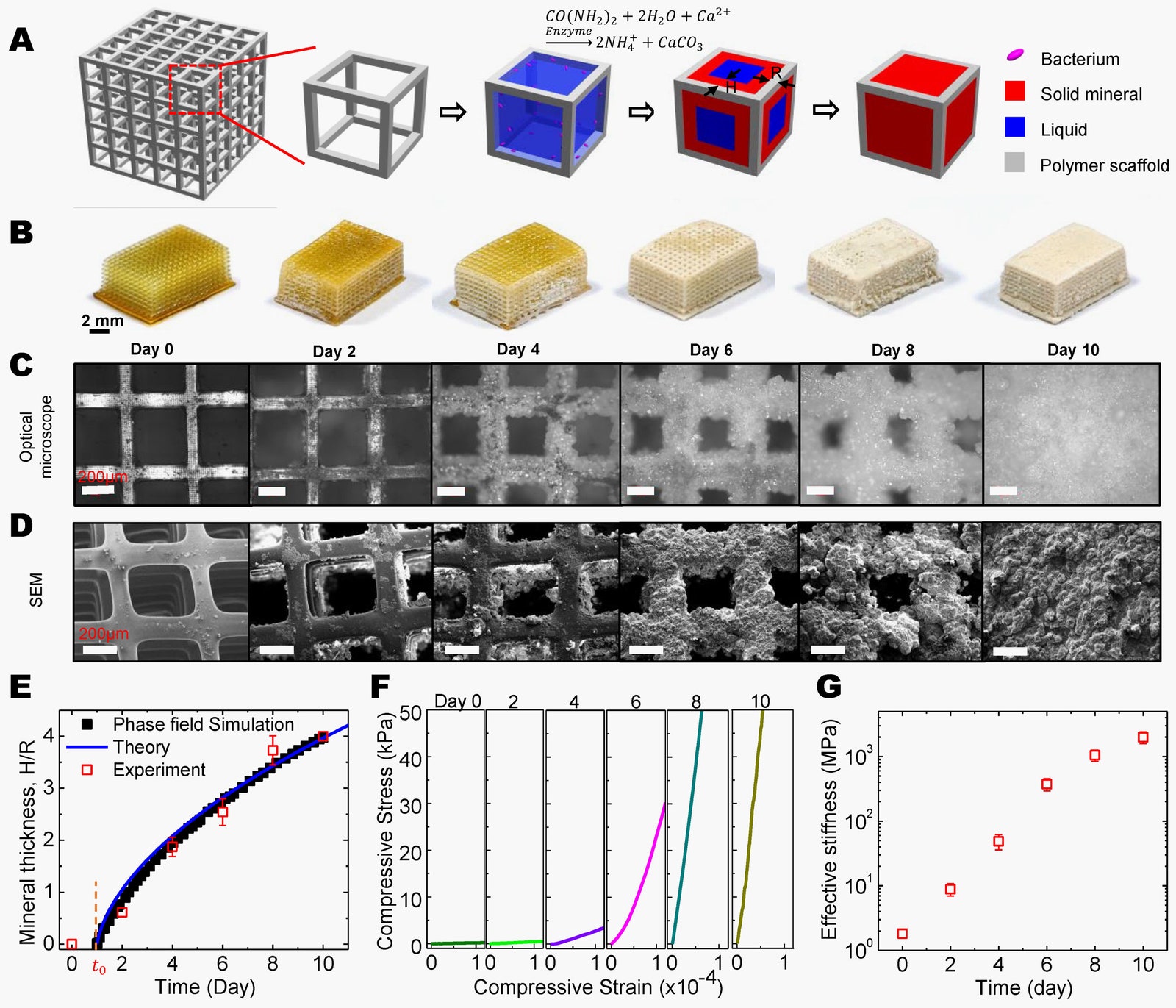 Courtesy of Qiming Wang
When the researchers dipped the structure into a second bath of urea and calcium ions, the urease kicked off a chemical reaction that created calcium carbonate.
This is the same material that gives a clam’s shell—as well as your own bones and teeth—their strength.
It’s also a component of the mantis shrimp’s hammer.
In the lab, as the researchers left the scaffolding in the solution, the calcium carbonate kept on accumulating, filling in the lattice entirely within 10 days, and giving the researchers a super-tough material made of a polymer skeleton and mineral innards.
You can see the structure’s progress in the image above. 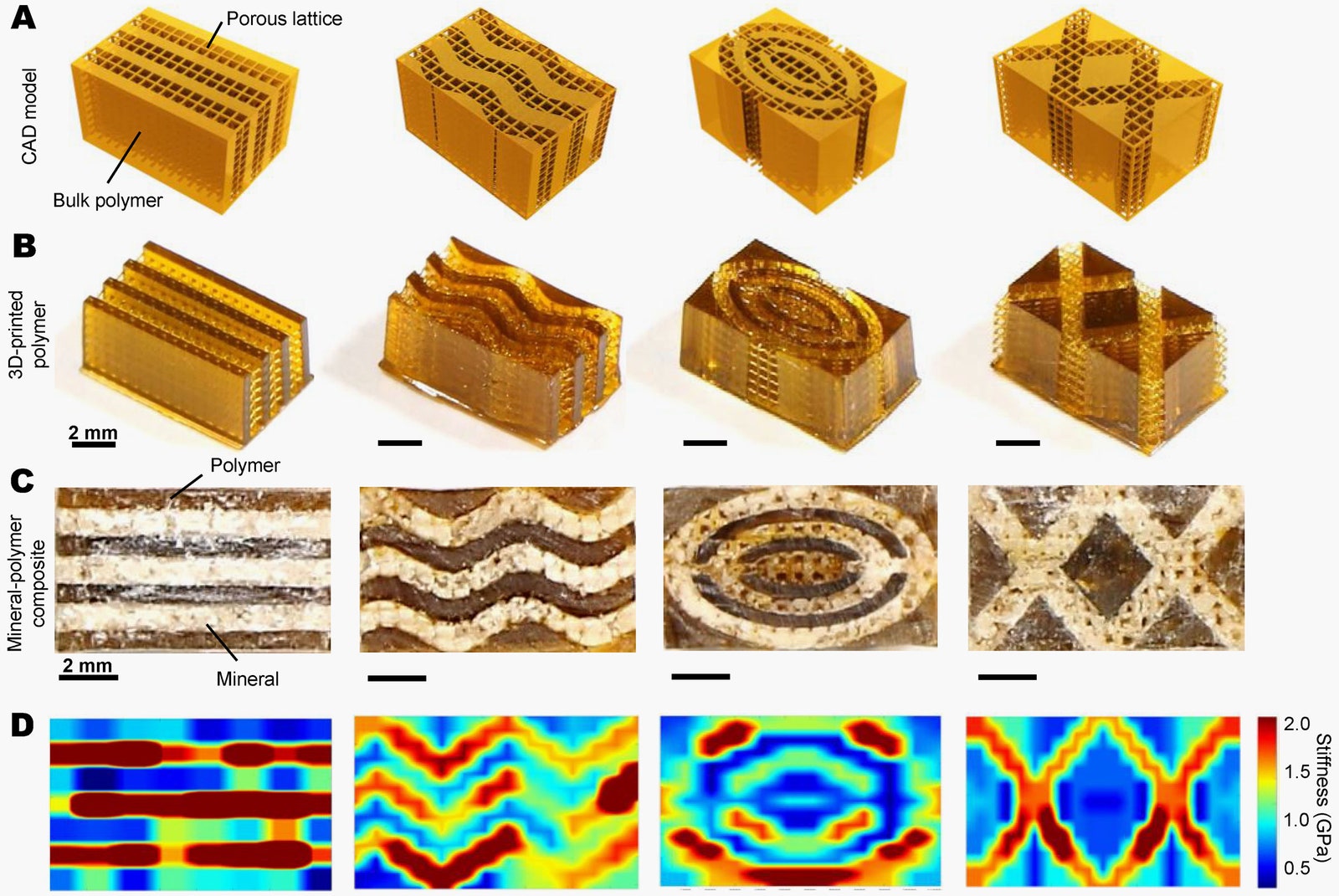 Courtesy of Qiming Wang
The researchers were able to 3Dprint lattices with a variety of interior shapes, from wave patterns to crosses, as shown in the images above.
Row C shows where the mineral filled in gaps in the polymer skeleton.
In the colorful images of row D, you can see that calcium carbonate mineral deposits score high in stiffness (indicated in red), while the lattice ranks lower (shown in blue and green).
But what the researchers were really after was the Bouligand structure, which gives the mantis shrimp’s hammer its resilience.
In the image below, there are four different types of lattices.
Image A shows what those 3D-printed structures look like, with Type I being just a linear stack of material, while Type IV is the Bouligand structure—each layer shifts 45 degrees, creating a kind of swirl.
In row C, the images show the dark bands of polymer filled in with white calcium carbonate.
Type I is arranged like aisles in the grocery store, whereas Type IV looks more chaotic. 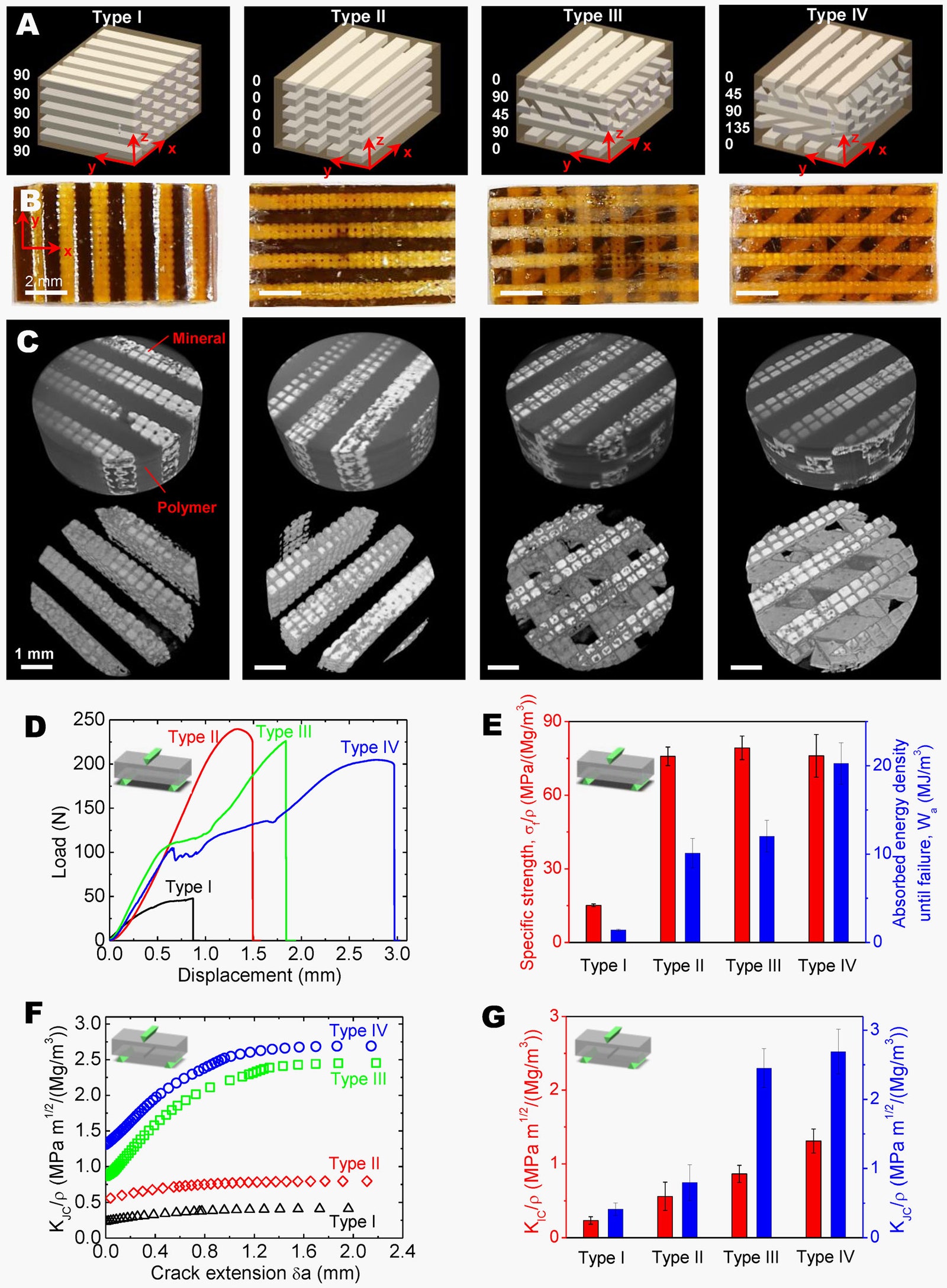 Courtesy of Qiming Wang
A good kind of chaotic, as it happens.
When the researchers tested the strength of each lattice, the Type IV Bouligand structure absorbed 20 times as much energy as Type I.
“This kind of microstructure makes sure that this kind of composite is very tough,” says University of Southern California engineer Qiming Wang, coauthor on a new paper describing the findings in the journal Advanced Materials.
“When you have a crack, that crack will propagate in the twist pattern to dissipate the energy inside the material.” In fact, the material absorbs more energy than natural nacre (mother of pearl), which gives some shells their strength, and also beats existing artificial materials, Wang and his colleagues say.
Just as the mantis shrimp’s hammer absorbs the energy of its punches without snapping, so too might materials developed with this new method.
For potential uses, Wang says to think of body armor, which needs to dissipate a bullet’s energy.
Calcium carbonate is also fairly lightweight, so scientists might also be able to grow tougher panels for aircraft or even skins for robots, Wang says.
“This is, for me, a way to do manufacturing in the future, and I'm not the only one saying that,” says Purdue University civil engineer Pablo Zavattieri, who wasn’t involved in this research.
In traditional manufacturing, defects can sneak in.
Nature, on the other hand, has, over the course of millions of years, developed the wondrous Bouligand structure in the mantis shrimp’s hammer, and it’s a pattern that can be replicated with a simple lattice and a bacterial bath.
“Nature is, in that way, impeccable,” Zavattieri says.
“Nature is a 3D printer.”
Another thing that makes this bacteria-built material special is its ability to regenerate.
Like, what if instead of building roads, we grew them? “If we have damage, you just introduce bacteria inside, and it can grow it back,” says Wang.
“These structures are very tough, very strong, and can potentially repair themselves.”
The researchers aren’t there quite yet—they got the bacteria to grow minerals in controlled conditions in the lab, and even then it was only in small quantities.
Scaling up for constructing roads would bring additional engineering challenges; for instance, getting the right ratio of supporting scaffold to hardening material.
But Zavattieri is actually already working on 3D-printing concrete.
“I don't think it's super crazy,” he says.
“We can totally have robots print the classic scaffold, leave the bacteria there, and then let them grow the material for 10 days.”
So perhaps one day the unabashed bashing of the mantis shrimp could help fix America’s busted infrastructure, instead of just breaking thumb.
Links :
Posted by geogarage at 1:45 AM