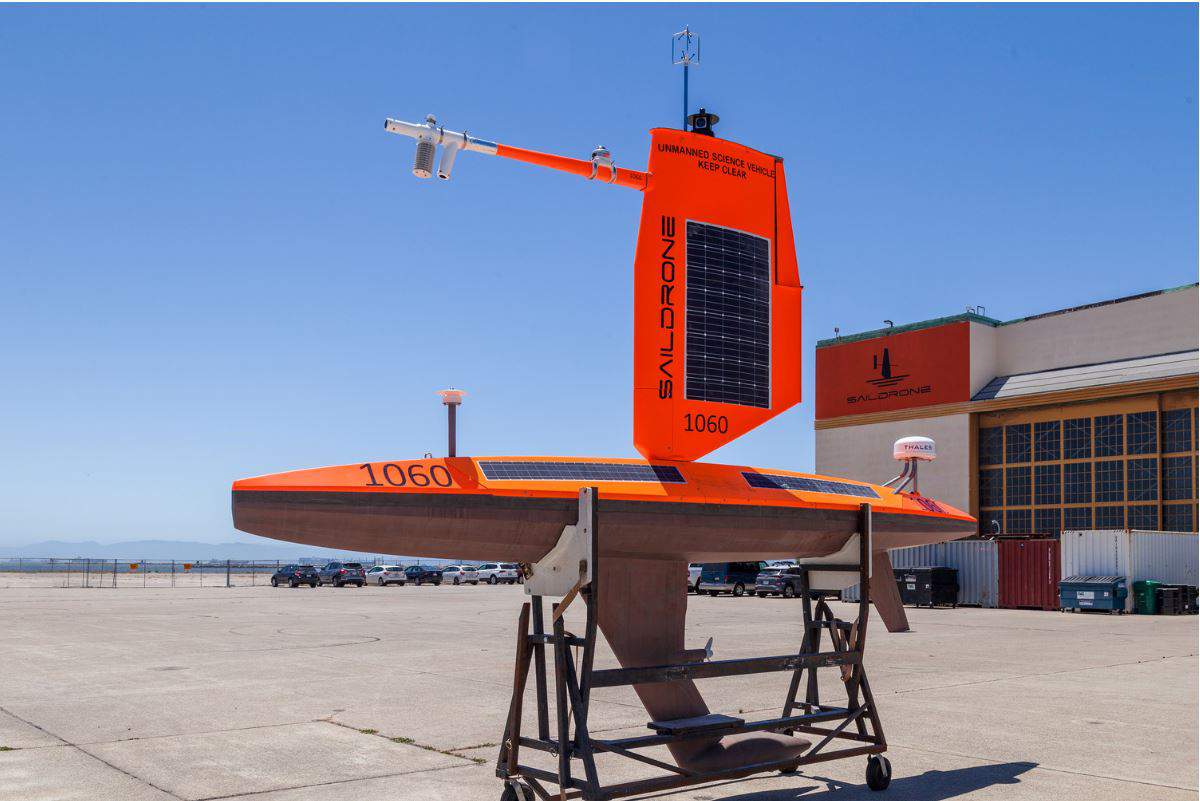 From WashingtonPost by Matthew Capucci

The Gulf Stream, the warm water current that weaves a serpentine path from the west Atlantic to the United Kingdom, routinely brews some of the most extreme winter storms in the northern hemisphere, disrupting shipping and marine commerce while affecting weather throughout the globe.

The Gulf Stream is also an enormous absorber of carbon dioxide, trapping greenhouse gases and preventing the pace of climate change from accelerating further.

Scientists are now hoping to gain a better understanding of what makes the Gulf Stream tick by launching “saildrones” — or surfboard-like “uncrewed surface vehicles” — that will ride the waters and transmit observations for up to a year.
Developed by the Saildrone company in Alameda, Calif., they are used to survey weather and ocean observations and can cover thousands of square miles with no carbon footprint.

“We had a competition where we asked what people would do if they had a Saildrone for a month,” said Anne Miglarese, Saildrone’s program executive officer for impact science.
Jaime Palter, a professor of oceanography at the University of Rhode Island, said she would “stick it in the Gulf Stream,” Miglarese recalled.

Saildrone was enthusiastic about the proposal.
It loaned Palter a unit that was launched from Newport, R.I., on Jan. 30, 2019.
Palter’s aim was to better understand how currents like the Gulf Stream fit into the global carbon cycle and how much of a net carbon sink, or absorber, they are.
Humans routinely emit more than 35 billion tons of carbon dioxide annually, about a third of which is believed to immediately end up in the oceans. 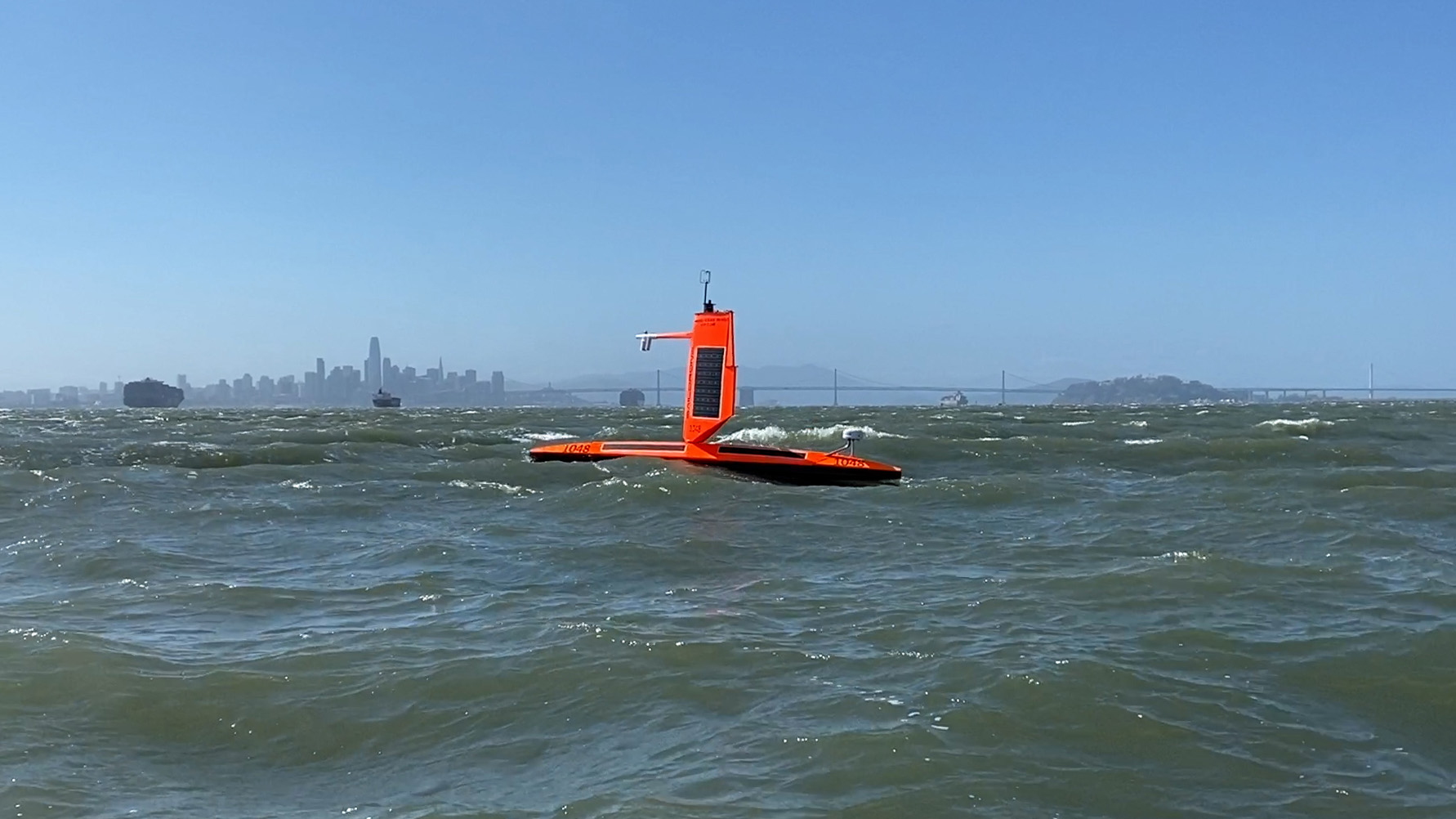 Recent Saildrone missions in the Antarctic have shown that the ocean’s role in the carbon cycle may not be as well understood as once believed, which could result in significant changes in how scientists model and research the dynamics of climate change.

“We circumnavigated the Antarctic last year on another philanthropic mission focused on monitoring carbon,” Miglarese explained.
“The scientific consensus [at the time] was that the Antarctic was a sink for carbon.
Our science showed it was a source part of the year.”

According to the paper published with the data, “observing the Southern Ocean is challenging due to its size, remoteness, and harsh conditions,” a problem that is also inveterate to the North Atlantic during winter.

The challenges of collecting data from the Gulf Stream motivated Saildrone to work with partners to explore the current’s role in the sequestration and release of CO2.
They’re partnering with NOAA, along with Palter, to analyze the findings once obtained.

“We need a more accurate global carbon budget, and missions like this one will support that and help test our assumptions,” Miglarese said. 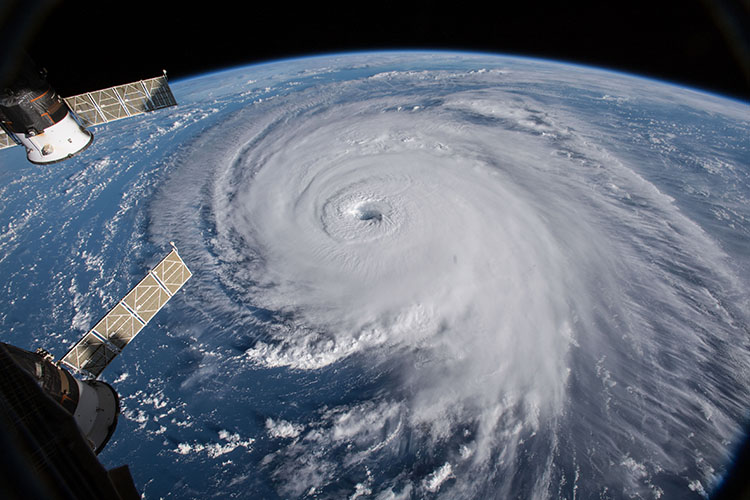 A dramatic view of Hurricane Florence as seen from the International Space Station.
A tropical cyclone is a generic term for a rapidly rotating tropical storm with a low-pressure center and clouds spiraling toward the center of the system.
In the Atlantic, they are also called hurricanes; in the Pacific they’re called typhoons.
Photo: NASA Goddard Space Flight Center/Flickr.

With the help of a roughly $1 million investment from Google, Saildrone will be launching a half dozen of its drones to roam the North Atlantic.
The company has three sizes of drones and is choosing its 23-foot Explorer model for this mission.

The drones resemble enormous surfboards with fins and have a 16-foot sail on top that is used as a mast for weather instruments, solar panels and a camera.
It can travel at speeds of three knots on missions lasting up to a year at a time.

The drones are powered by sunlight and wind and wirelessly transmit compressed data back to shore.
Some Saildrones are equipped to monitor populations of sharks and other fish and algae.

The design builds upon the last iteration of the Saildrone Explorer, which was used in Palter’s 2019 study.
During that mission, a strong gust of wind tore the wing from the Saildrone — but that didn’t halt the project.

“The wing ripped in half, but the drone continued to operate for about 10 days,” said Miglarese.
“They got more data than they’ve ever gotten before.
After that mission, Richard, [Saildrone’s CEO], redesigned the wing.
Now they are meant specifically for this work.”

The new “hurricane wings” will be added to Saildrones that the National Oceanic and Atmospheric Administration will place in the tropics during hurricane season as part of a later project.

Saildrone’s latest endeavor will investigate more than just dissolved carbon concentration.
The drones will collect weather and water temperature data in a part of the Atlantic largely bereft of weather buoys.
That could prove enormously beneficial in improving the accuracy of weather forecasts.
NOAA’s Climate Prediction Center is predicting a 60% chance that the 2021 Atlantic hurricane season will be above-normal, with 13–20 named storms.
About half of those are expected to become hurricanes, and 3–5 of those are expected to become major hurricanes, Category 3 or higher.

The European Centre for Medium-range Weather Forecasts, or ECMWF, hosts the most powerful weather model in the world and is often considered the most accurate.
It hopes that data provided by the Saildrones will improve forecasts made for Europe.

“We will ingest some of the data from the Saildrones, but not all,” Philip Browne, a data scientist at the ECMWF, wrote in an email.
“In particular we will use the surface pressure data operationally, and that will go straight into the weather forecasts we produce.”

That could bring model improvements as soon as the data starts flowing.

Ocean current data from the Gulf Stream will be vetted and used only internally at first because scientists at the ECMWF need to make sure the data is processed and handled by computers correctly.

“The many other sensors and observation types carried by the Saildrones have different routes into the system,” Browne said.
“For example, the sea surface temperature measurements will end up in our forecasts.”

He explained that sea surface data is first taken in by the United Kingdom Met Office, which produces a global sea surface temperature analysis, which is fed into the ECMWF model.
“The data should be available for all weather centres to use if they can,” Browne wrote.

In the meantime, Miglarese said she is excited for what’s ahead for Saildrone and is looking to the rollout of its biggest model yet — the Saildrone Surveyor.
“We just launched a 72-foot drone that does bathymetric measurements,” she said.
Bathymetry describes the shape, depth and topographic features of the sea floor.
“It’s a big vessel. It’s pushing a lot of power.”