In sailing, women are taking more than a seat 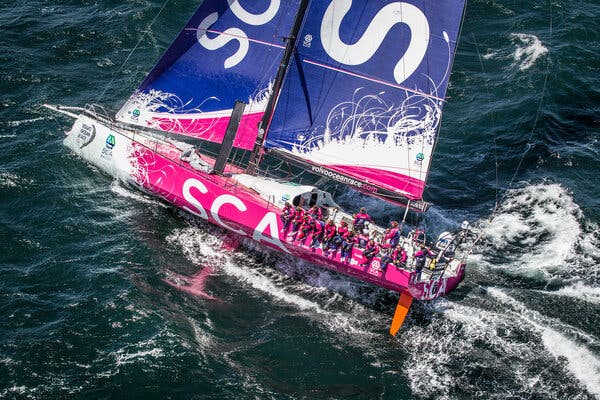 The all-female Team SCA, of which the British sailor Sam Davies was the skipper, during the Cape Town Practice Race of the Volvo Ocean Race 2014-15.
Credit... Ainhoa Sanchez/Volvo Ocean Race, via Getty Images
From NYTimes by David Schmidt

They have waited years to earn respect, but now they are winning races and skippering and owning boats.

Competitive sailing has long been an old-boys’ club, yet over the past several decades, women have not only been joining the sport, they have also sometimes been taking charge of it.
They have become senior executives of sailing organizations and yacht clubs, and skippers and owners of boats.

For the first time, in 2018, a female skipper won an around-the-world race, one of the most grueling events in any sport, and five all-women’s teams have completed the round-the-world Volvo Ocean Race (now called just the Ocean Race).
The last American sailor to win an Olympic gold medal was a woman, in 2008, and women have also hoisted the America’s Cup.

Dawn Riley did that in 1992, and she now leads one of the pre-eminent high-performance sailing training centers in the United States.
Cory Sertl is president of US Sailing, the national governing body, and vice president of World Sailing, the international governing body.
And Lindsey Duda Coe was one of the winners of the Chicago Yacht Club’s 2019 Race to Mackinac on the boat she owns.

“Women athletes have been participating in Olympic sailing since 1988,” Sertl said.
“So, there are now more women who have experienced sailing at the highest level, and a number of these women have been drawn into being officials and leaders in the sport.” 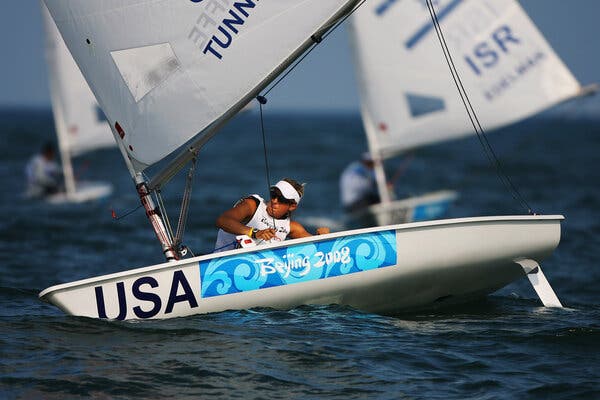 Anna Tunnicliffe Tobias of the United States, competing at the 2008 Olympic Games in Beijing, where she won a gold medal.Credit...
Clive Mason/Getty Images
Pamela Healy, a bronze medalist at the 1992 Summer Olympics, said having female leaders was vital.

“There was a Harvard Business Review study on boardroom dynamics that showed that corporations are more successful when they have at least three women voting members on their board of directors,” she said.
“Women add a diverse perspective that is invaluable to decision making and problem solving.”

Still, she sees opportunities for improvement.
“It’s important to see photos of women in blazers on the wall, so women feel represented,” Healy said, referring to yacht-club leadership.
“And we need to improve boat ownership. That will equate to true equality.”

Some gender accomplishments have been hard-won.
Riley said she once discovered that a male crew member with similar duties and experience was being paid twice as much as she was.

“I’m pretty happy with where I’ve gotten,” said Riley, who later served as team captain of the mostly female America’s Cup team­ Mighty Mary.
“But my path was decidedly different than if I was male.”

Sertl, who was a member of the 1988 United States Olympic Sailing Team, said sailing was still evolving.

“I feel really fortunate in the U.S. to have tremendous support from men and women,” she said of her position at US Sailing.
“But World Sailing is different and changing.”

For example, five years ago, Sertl made a motion at a meeting of World Sailing to have gender equity in classes of boats and in the number of medals and athletes at future Olympics.
At that time, there were more sailing events for men than for women.
“Three men in the room objected,” she said.

While women have competed for sailing medals since the 1988 Summer Olympics, and the International Olympic Committee is mandating a push for gender equality, Sertl wants to see more female coaches who can serve as role models for aspiring female Olympic athletes.
“Many female athletes coming up haven’t had a high-performance female sailing coach,” she said

Sam Davies is one of the most accomplished offshore sailors in the world, male or female, and has competed three times in the Vendée Globe, the solo around-the-world race.
Far more people have reached the summit of Mount Everest than have completed the Vendée Globe, which takes about 80 days to finish.

“I think that some of the hardest challenges I face are not because I’m a woman skipper, but because what I do is hard,” said Davies, who has also skippered the all-women’s Team SCA in the 2014-15 fully crewed Volvo Ocean Race.

But she also said that women had a possible advantage in her sport: sponsorships.

“It’s maybe easier if you’re a good woman skipper,” she said of the Vendée Globe.
“Women can bring a good return on investment for a sponsor, because we’re a minority in a male-dominated sport.”

But finding sponsorship and acquiring the right boat are different matters.
Of the 30 boats that were on the starting line of the 2020-21 Vendée Globe, five were skippered by women.
Eight were new designs, all skippered by men.
“What’s missing is a sponsor who will give a boat that’s capable of winning to a female skipper,” Davies said. 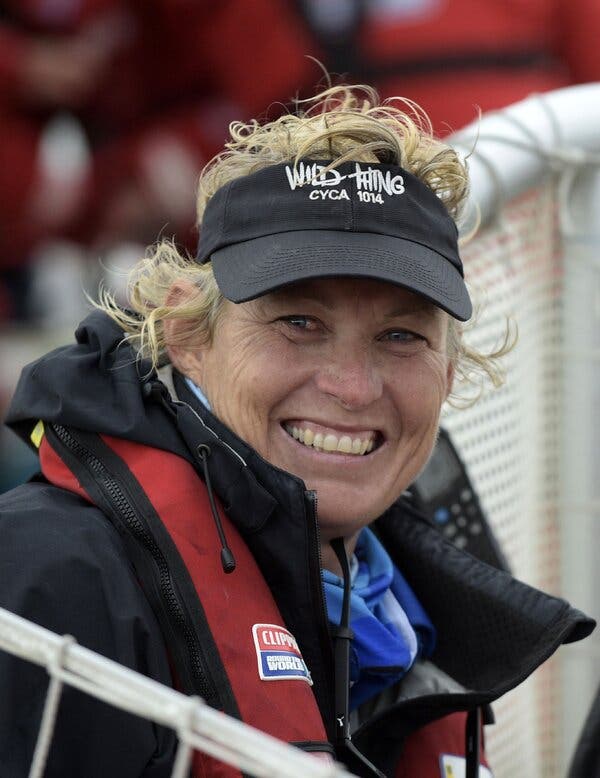 The skipper Wendy Tuck, winner of the 2017-18 Clipper Round the World Race.Credit...Miguel Rojo/Agence France-Presse — Getty Images
So far, Wendy Tuck is the only female skipper to have won an around-the-world race.

“When I started skippering, I didn’t realize there wasn’t one,” said Tuck, who won the 2017-18 Clipper Round the World Race.
Unlike the professional crews of the Ocean Race, Clipper crew members pay to race aboard identical boats under the tutelage of experienced skippers like Tuck.
While this may lower the race’s level of competition, it increases the skipper’s leadership challenges.
“My crews varied, but they were roughly 30 to 40 percent women,” Tuck said.
“I’ve been on non-Clipper trips where the men say that they like having females aboard, because it changes the dynamics.”

Although the number of women who are skippers has been growing, they are still outnumbered by men, which can hurt confidence.

“A lot of women still believe that men are more capable than women,” said Kristina Plattner, who is skipper of the TP52 Phoenix 12, which she races on the 52 Super Series circuit.
“But it’s not true, especially for helming a yacht.”

Which is why role models are critical.
“I really hope that other girls can see women out there driving,” said Duda Coe, owner of the Santa Cruz 52 Sin Duda.
She admitted that being a female skipper was sometimes a struggle.
“Even on a boat I own, I’ve been intimidated by guys,” she said.

The gender disparity, she added, is part cultural and part physiological.
“Body size and strength are important,” Duda Coe said, but they are not the whole picture. 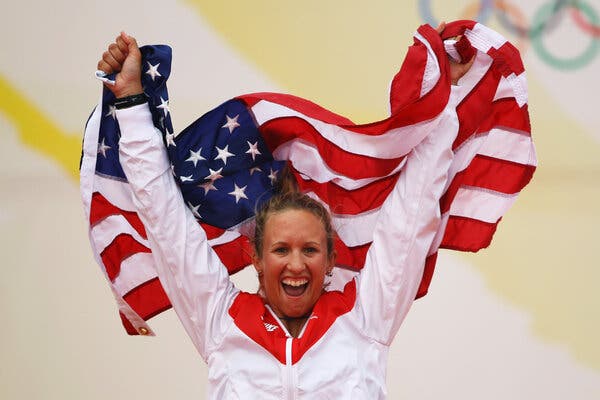 “I’m fairly fit, I think, but I cannot put out the wattage on the winches that some of the guys put out for 10 to 20 minutes, just because I don’t have the weight or height to put behind it,” she said.
“However, there are many other positions that I can do in the back of the boat, like drive, call tactics and navigate.”

Still, Tunnicliffe Tobias, who is also an elite-level CrossFit athlete, acknowledged that Grand Prix sailing is highly competitive.
“At the elite level, there are only so many spots available,” she said.
“I was once told, ‘If you want a spot on the boat, earn it’. It resonated well with me.”

More women are getting the opportunity to earn their spots aboard the most sophisticated boats because of efforts like SailGP’s mandate that teams have at least one female sailor.
Other Grand Prix events, such as the Ocean Race, offer incentives, like having a larger crew, to teams that race with female sailors.

So while women have made great strides in sailing, Riley isn’t content.
“When you shatter the glass ceiling, it’s not the first woman, it’s the third,” she said.
“That’s when you start to get equity.”
Posted by geogarage at 1:25 AM