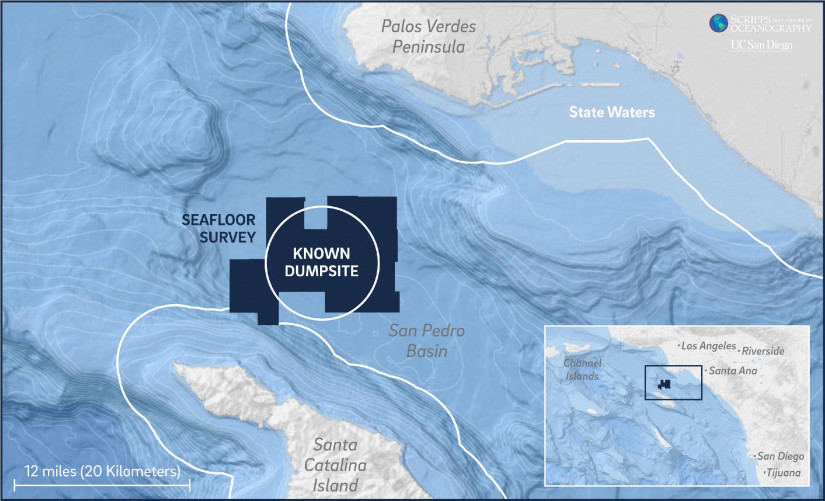 Barrels and targets of interest were found in nearly all areas of the 36,000 acres surveyed and extended beyond dumpsite limits, which is roughly 12 miles offshore Los Angeles, and eight miles from Catalina Island. Credit: Scripps Institution of Oceanography at UC San Diego. 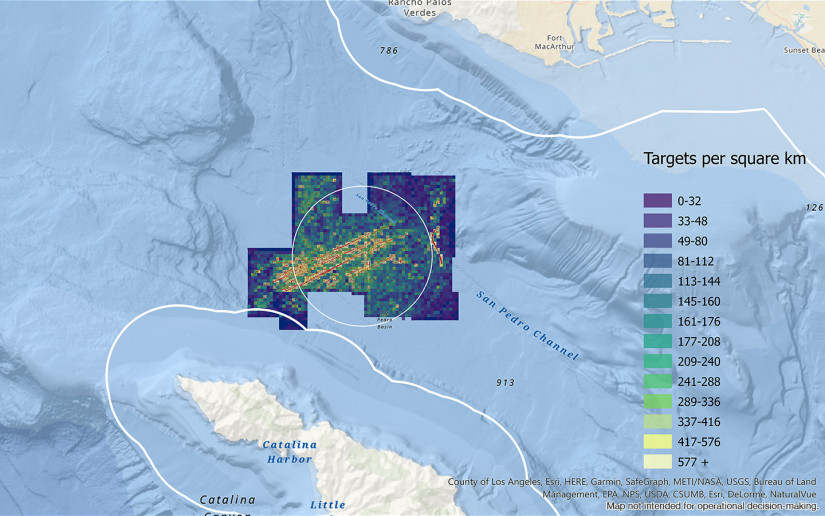 A heat map showing concentrations of targets detected in the San Pedro Basin.
There are several distinct track-line patterns in the surveyed area, suggesting that the dumping was repeatedly done from an underway platform such as a moving ship or barge.
Credit: Scripps Institution of Oceanography at UC San Diego.
From The Guardian by AP
Extent of possible toxic waste site near Catalina Island ‘staggering’, says chief scientist on sea survey 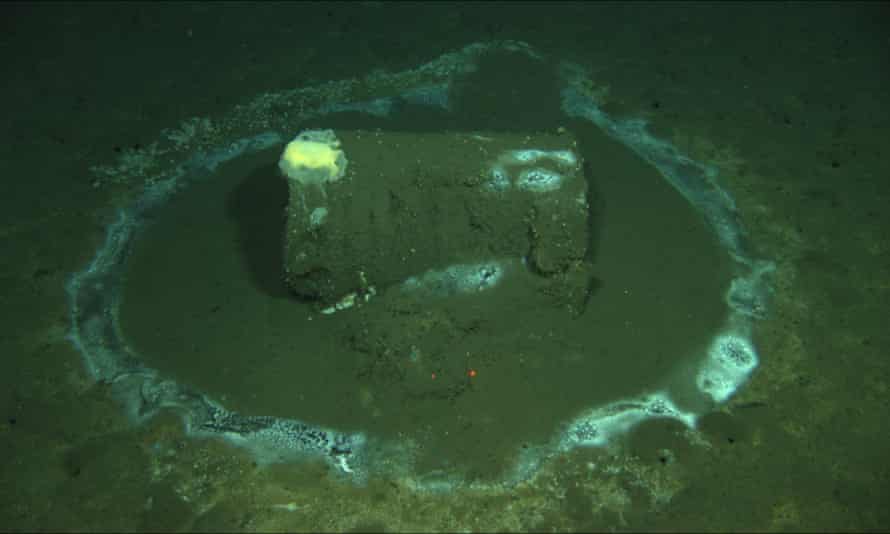 In this 2011 image provided by the University of California Santa Barbara, a barrel sits on the seafloor near the coast of Catalina Island.
Photograph: David Valentine/AP
Marine scientists say they have found what they believe to be as many as 25,000 barrels possibly containing DDT dumped off the southern California coast near Catalina Island, where a massive underwater toxic waste site dating back to the second world war has long been suspected.
The 27,345 “barrel-like’” images were captured by researchers at the University of California San Diego’s Scripps Institution of Oceanography.
They mapped more than 36,000 acres of seafloor between Santa Catalina Island and the Los Angeles coast in a region previously found to contain high levels of the toxic chemical in sediments and in the ecosystem.
Historical shipping logs show that industrial companies in southern California used the basin as a dumping ground until 1972, when the Marine Protection, Research and Sanctuaries Act, also known as the Ocean Dumping Act, was enacted.
Resting deep in the ocean, the exact location and extent of the dumping was not known until now.
The territory covered was “staggering”, said Eric Terrill, chief scientist of the expedition and director of the Marine Physical Laboratory at Scripps Institution of Oceanography.
Underwater drones using sonar technology captured high-resolution images of barrels resting 900 metres (3,000ft) below the surface all along the steep seafloor that was surveyed.
They also were seen beyond the dumpsite limits.
“It really was a surprise to everybody who’s worked with the data and who sailed at sea,” he told reporters on Monday.
The survey provides “a wide-area map” of the barrels, though it would be up to others to confirm through sediment sampling that the containers held DDT, Terrill said.
It is estimated between 320 and 640 tonnes of DDT were dumped in the area, 12 miles from Los Angeles, and 8 miles from Catalina Island.
The long-term impact on marine life and humans was still unknown, said Scripps chemical oceanographer and professor of geosciences Lihini Aluwihare, who in 2015 co-authored a study that found high amounts of DDT and other man-made chemicals in the blubber of bottlenose dolphins that died of natural causes.
“These results also raise questions about the continued exposure and potential impacts on marine mammal health, especially in light of how DDT has been shown to have multi-generational impacts in humans,” said Aluwihare, who was not part of the survey expedition.
Diana Aga, a chemistry professor at University at Buffalo who is not affiliated with the study, said the findings were shocking if the barrels were proven to contain the toxic chemical.
“That’s a lot of DDT at the bottom of the ocean,” she said.
If the barrels had not leaked, they could be moved to a place where disposal was safer, Aga said.
If they leaked, scientists could take samples from the water, sediment and other marine life to gauge the damage. 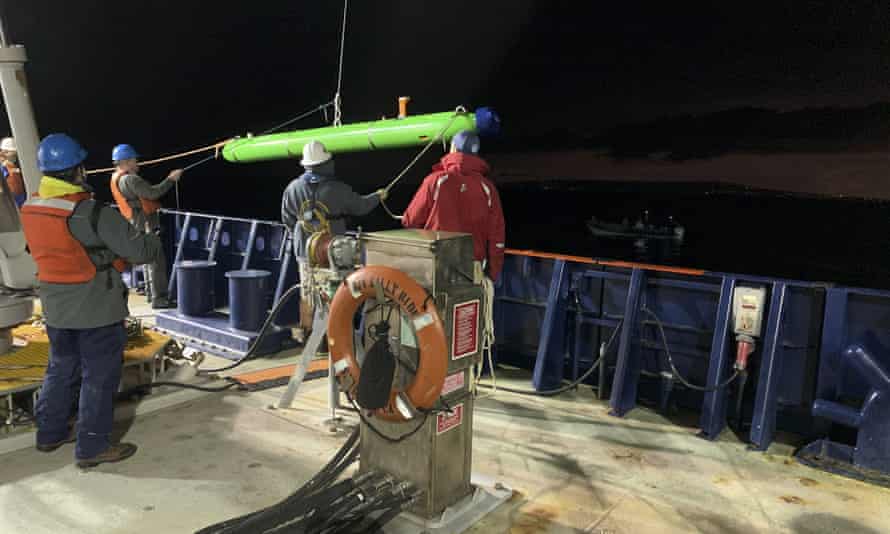 Researchers on the research vessel Sally Ride deploy an autonomous underwater vehicle near Santa Catalina Island. Photograph: AP
Scientists conducted the survey from 10-24 March following a Los Angeles Times report last year about evidence that DDT was dumped into the ocean.
Terrill said: “Unfortunately, the basin offshore Los Angeles had been a dumping ground for industrial waste for several decades, beginning in the 1930s. We found an extensive debris field in the wide area survey.”
Scientists started the search where University of California Santa Barbara professor David Valentine had discovered concentrated accumulations of DDT in the sediments and spotted 60 barrels about a decade ago.
High levels of DDT have been detected in the area’s marine mammals, and the chemical has been linked to cancer in sea lions.
Scripps researchers say they hope their survey will support clean-up efforts.
The expedition on the Sally Ride research vessel included a team of 31 scientists, engineers, and crew conducting 24-hour operations and two autonomous underwater vehicles.