What is an 'internal wave'? It might explain the loss of an Indonesian submarine 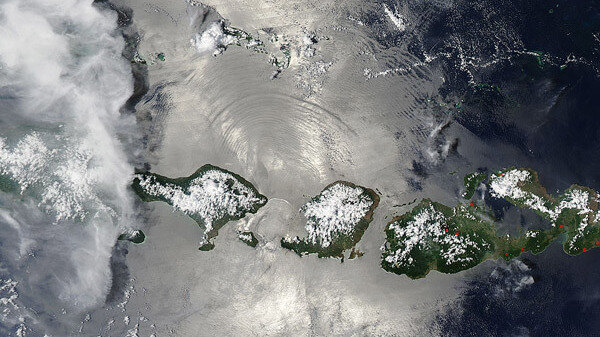 An image taken by NASA's Aqua satellite as it passes over Indonesia, captures evidence of an internal wave in the same general area where the KRI Nanggala submarine disappeared earlier this month.Jeff Schmaltz/, MODIS Land Rapid Response Team, NASA GSFC
From NPR by Scott Neuman
No official cause has yet been established for the destruction of an Indonesian submarine with 53 people aboard earlier this month, but some speculation has zeroed in on an undersea phenomenon which has been noted by submariners since at least World War II, though it has become better understood only in recent decades.
A senior Indonesian navy official suggested earlier this week that an "internal wave" may have pushed the KRI Nanggala 402 below its crush depth, causing the loss of the vessel and all aboard.
He cited satellite images showing the presence of such a wave in the area at about the time the sub disappeared.

Such waves — while seldom noticed by observers on the surface — can reach dizzying undersea heights and therefore cause concern for submarines, scientists say.
They are generated by the interplay of strong tides, warmer and cooler ocean layers and the undersea geography.

Internal tides, or internal waves, can reach hundreds of feet underneath the ocean surface, but might only be a few inches high on the surface.
Even though they’re underwater, NASA can see these tides from satellites.
They provide oceanographers with a unique way to map and study the much larger internal water motion.
Internal waves occur in specific ocean regions around the world – places such as the Strait of Gibraltar that links the Mediterranean with the Atlantic Ocean, parts of the Western Pacific and the South China Sea.
They are also known to exist in the Lombok Strait area in Indonesia, where the Nanggala was lost.
Matthew Alford, the associate director of the Marine Physical Laboratory at the Scripps Institution of Oceanography in San Diego, says that the U.S., China and Russia "have spent a lot of money" studying internal waves in the South China Sea because of their potential impact on naval operations in the strategic waterway.
"[I]nternal waves are very strong and are a hazard because they sweep ocean layers (and potentially anything in them including divers or subs) downwards hundreds of meters in just a few minutes," Alford says in an email to NPR.
"Lombok Strait is also a known region of strong internal waves," Alford, who researches the phenomenon, says.
Though he has never before heard of an internal wave sinking a submarine, it is a "plausible" scenario, Alford says. 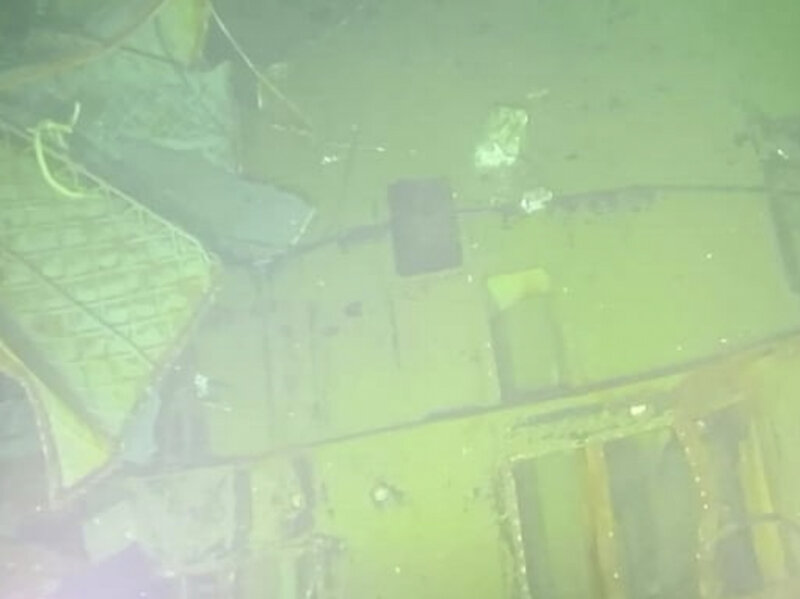 A photo released on Sunday by the Indonesian navy shows parts of submarine KRI Nanggala that sank in the Bali Sea. Officials now speculate that the loss of the sub could have been caused by an internal wave.
Indonesian Navy/AP
A 1966 study by the U.S. Navy noted that "The passage of large-amplitude internal waves could make submarine depth control difficult, particularly when the submarine is running quietly at low speed."
The report, titled Internal Waves: Their Influence Upon Naval Operations, added that such waves "could initiate uncontrollable sinking of a submarine."
In World War II, submariners avoided the Strait of Gibraltar partly because they were aware of its reputation for propagating unusual undersea waves that were considered hazardous, David Farmer, a physical oceanographer at the University of Rhode Island, told USA Today in 2014.

Internal waves in the Strait of Gibraltar. Computer Graphics Animation of the outputs of a numerical model run in the Strait of Gibraltar showing the phenomenon of the internal waves produced by tides. Physical Oceanography Group University of Málaga (Spain)
At the height of the Cold War in 1984, a Soviet submarine that was apparently running beneath a tanker to mask its exit from the Strait suddenly smashed into the tanker's hull, causing damage to both vessels and forcing the submarine to surface.
The collision is thought to have been caused by an internal wave that unexpectedly thrust the submarine toward the surface.
Maarten Buijsman, a marine scientist at the University of Southern Mississippi, agrees that it's possible that an internal wave could have caused the sinking of the Nanggala.
"Some internal waves can have large amplitudes and they can displace submarines," he says.
The waves "are generated over steep topography due to the surface tides," he tells NPR. "In the South China Sea, internal wave amplitudes can be about 100 meters (330 feet)."
In the case of the Nanggala, what happened may have been the exact opposite of what occurred with the Soviet submarine in the Strait of Gibraltar in the 1980s – instead of an internal wave causing the submarine to hurtle toward the surface, the Indonesian vessel may have been pushed much deeper than it was designed to safely operate.
The Nanggala's demise is still under investigation. According to Indonesian Adm. Yudo Margono, the vessel was located in at least three pieces on the ocean floor at a depth of nearly 840 meters (2,750 feet) — far deeper than the submersible's "collapse depth" of 200 meters (655 feet).
An internal wave is just one possible explanation for the destruction of the German-built diesel-powered submarine.
Although it underwent a refit in South Korea that was completed in 2012, it was an old boat — having gone into service with the Indonesian navy in the early 1980s.
Nanggala was also reportedly preparing for a torpedo exercise at the time radio contact was lost — and torpedo accidents have been the cause of some high-profile submarine losses in the past.
In August 2000, an explosion of a torpedo in a tube aboard the Russian submarine Kursk set off the other torpedoes, causing the sub to go down in the Barents Sea, with all 118 of its crew, according to an official investigation.
Decades earlier, in 1968, the nuclear-powered USS Scorpion was lost with its 99 crew.
The cause of the Scorpion's sinking has never been conclusively proved, but one theory suggests that the submarine succumbed to a "hot-run" torpedo that unexpectedly became active while still in its tube.
During a media briefing in Jakarta earlier this week, Rear Adm. Iwan Isnurwanto, himself a former submariner, painted a grim picture of KRI Nanggala's final moments.
If it was an internal wave, he said, "that would be nature we are up against."
"We would be dragged by the waves, sending us to a quick descent," he said, adding, "No one can fight nature."
Links :
Posted by geogarage at 1:57 AM