Embarking on Magellan and Elcano’s first journey around the world 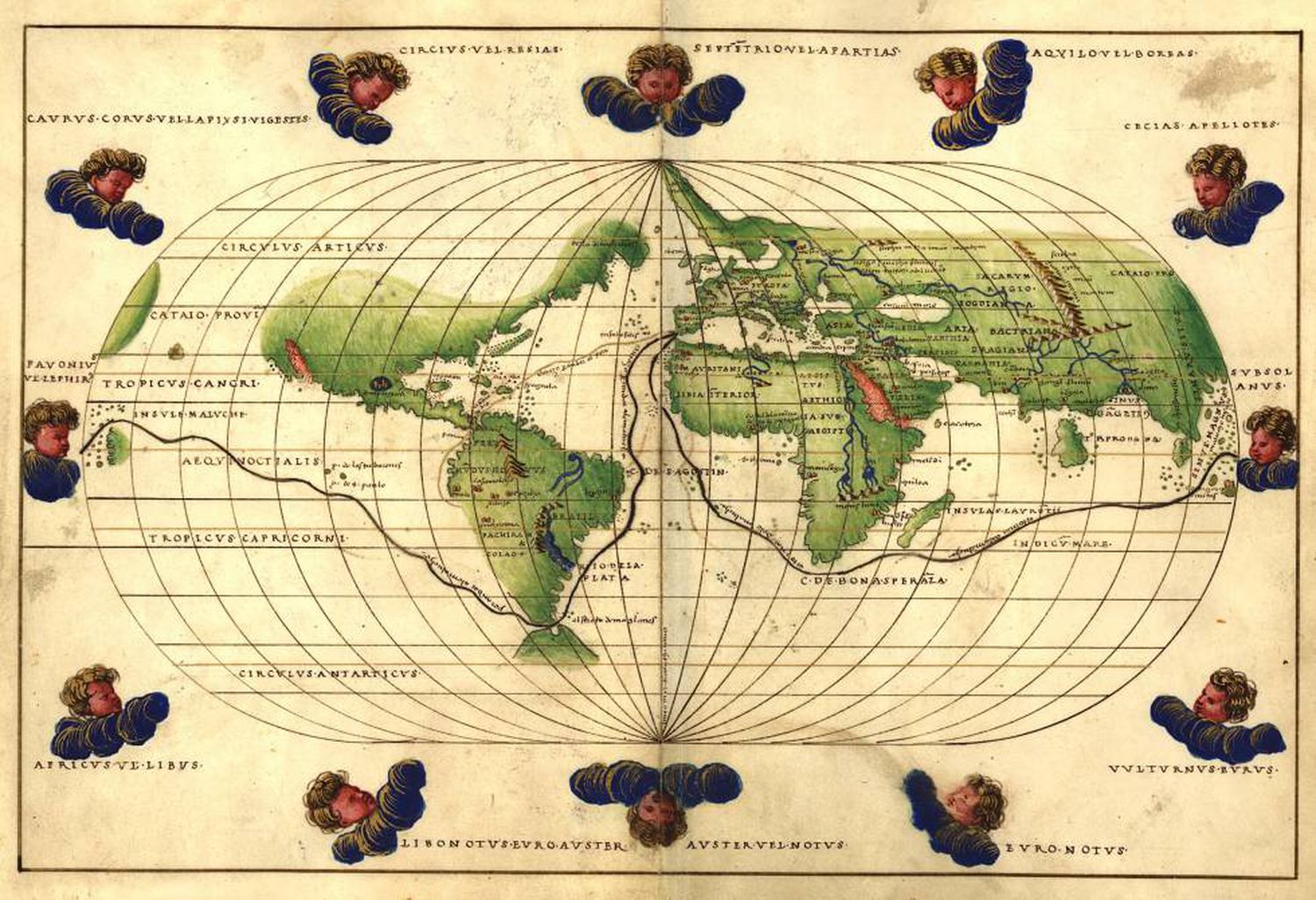 Map of the Magellan route from a Battista Agnese atlas (1544).

From El Pais by Elena Sevillano

Using a thousand images and 73 digital features, Google Arts & Culture has devised a new digital experience allowing users to follow in the footsteps of these two groundbreaking explorers

On December 10, 1520, an expedition led by Portuguese explorer Ferdinand Magellan and Spanish navigator Juan Sebastián Elcano crossed what is now the Straits of Magellan, bringing it to the brink of the unexplored vastness of the Pacific Ocean.
Five centuries later, Google has brought its entire technological arsenal to bear to celebrate the fifth centenary of what was the first journey around the world.

https://artsandculture.google.com/project/first-world-tour
In collaboration with the Spanish Culture Ministry and the Spanish National Commission of the First Trip Around the World, Google Arts & Culture has launched a digital platform that examines the details of the three-year voyage, which lasted from 1519 to 1522, and its impact on Europe’s understanding of the enormity of the planet, using a thousand images, 73 digital features and the support of 12 cultural institutions.

Magellan and Elcano’s route for the first trip around the world.
Dubbed “The First Round-the-World Trip,” the initiative invites online users from all over the world to immerse themselves in the minutiae of the journey and accompany the protagonists on their route with reference to historical documents and maps as well as visiting a replica of the Victoria – the only ship to make it back.
It also introduces us to the communities we would find at the explorers’ various destinations if we were making the same journey today.

“The exhibition is divided into three sections that try to explain not only the naval adventure but also the before and after – its consequences, which are evident today,” says a Google Arts & Culture spokesman. The first section, called Expedition, tells us about the preparations for the trip, giving detailed descriptions of the five ships, their crews, their protagonists and the historical context in which the journey took shape. The Exploration section shows the maps and instruments used by the explorers, and the flora and fauna they encountered along the way. Finally, the Transformation section analyzes the legacy of the voyage, which, in the words of the organizers, left “a spherical world connected by oceans, cultural and social exchanges and trade.”
Seville and Sanlúcar de Barrameda in the 16th century

The illustrator Arturo Redondo has provided two interactive maps that allow users to explore the two points of departure, Seville and Sanlúcar de Barrameda, in 1519.

On August 10, 1519, the expedition led by Portuguese explorer Magellan and Basque explorer Elcano left the port of Seville.

Seville in 1519, illustrated by Arturo Redondo.
Its goal was to seek a new westward route toward the Moluccas or Spice Islands in Indonesia.
The expedition involved five ships – the Trinidad, the San Antonio, the Victoria, theConcepción and the Santiago – and a collective crew of 245 sailors, including Castilians, Portuguese, Greeks, French, Italians, Belgians, English and Germans.
The only ship to return to Seville in 1522 was the Victoria, captained by Elcano.
It came back with 35 men on board after a 1,084-day voyage covering 46,270 nautical miles – about 85,700 kilometers, which is more than twice the Earth’s circumference.
The ship’s reappearance at its port of departure was empirical proof that the oceans were interconnected and that the Earth was round.
“We have discovered and rounded all the roundness of the world,” Elcano wrote to King Charles V of Spain from Sanlúcar de Barrameda on his return.

An engraving by Magellan discovering the strait that will bear his name in Patagonia.
Credits: Hulton Archive - Getty
A virtual walk through a replica of the Victoria

The replica of the Victoria is 26 meters long and six meters wide. It can be visited digitally, with a 360º view, thanks to Google’s Street View technology (click here to see it).
The tour includes its sails (six, with a total area of 286 square meters), the hold, the deck and main mast and the forecastle. 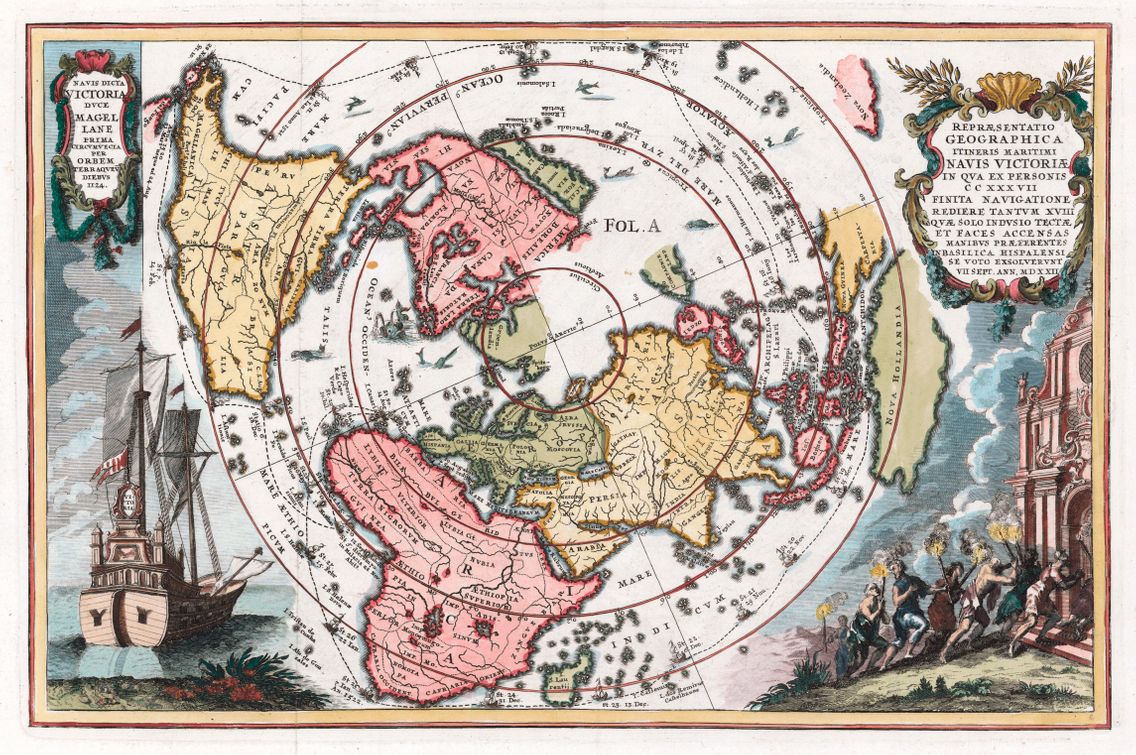 Users can trace the voyage on a detailed map: the journey along the African coast; the arrival on November 29, 1519, in Brazil with a stopover in Santa Lucía Bay in what is now Río de Janeiro; and the journey through the Tierra del Fuego, which was named after the bonfires lit by the native Indians.
On November 28, 1520, the ships Trinidad, Concepción and Victoria found their way to the South Sea via what is now known as the Straits of Magellan, which are 565 kilometers long.
It took 38 days to cross and took them from the Atlantic to the Pacific. 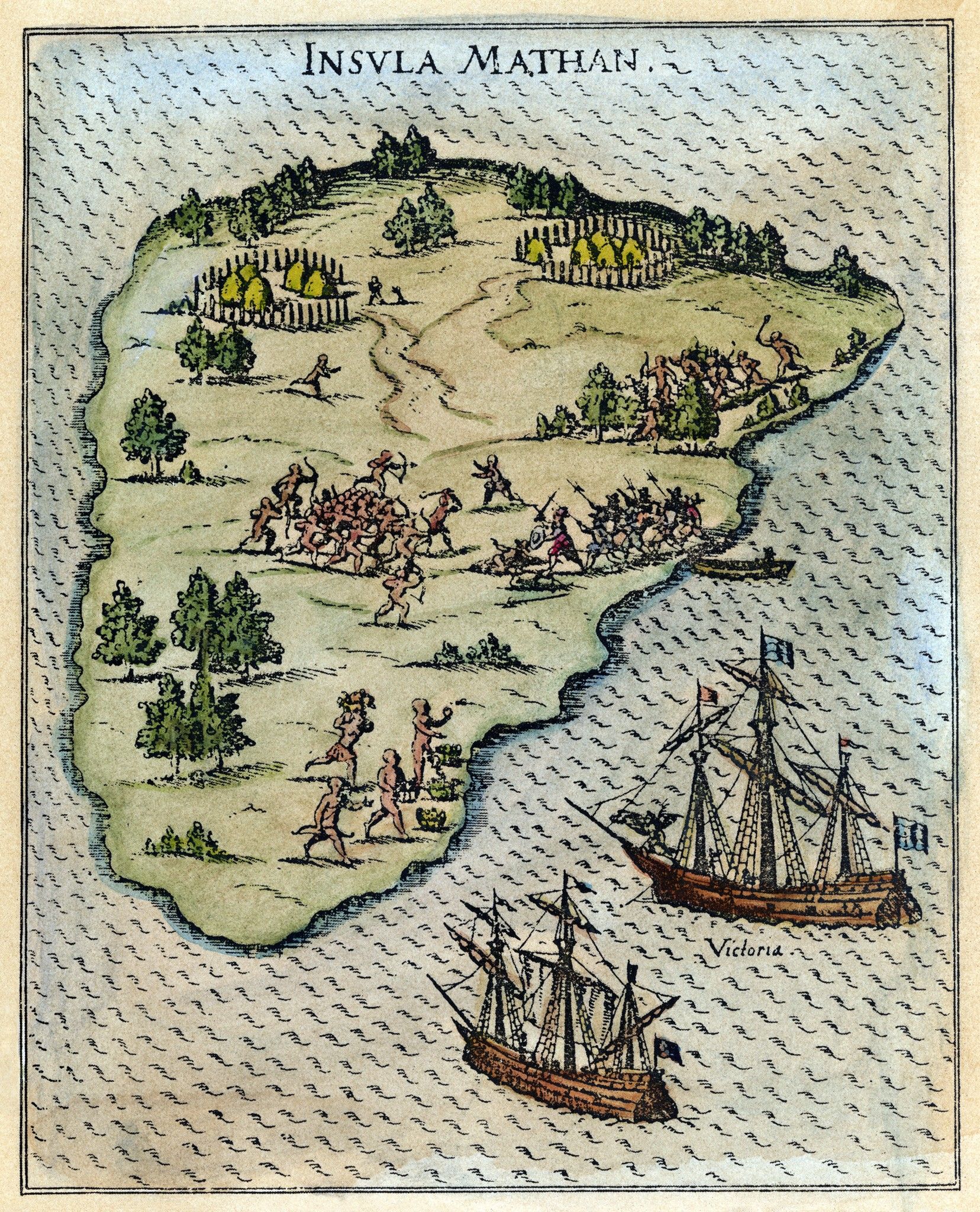 In March 1521, the expedition reached the Philippines, where relations with the indigenous people changed from a peaceful exchange of fruits to a fierce battle.
Magellan was killed on the island of Mactan on April 27th.
After 100 days crossing the biggest ocean on the planet, they arrived at the Mariana Islands east of the Philippines and south of Japan; on April 27, 1521, Magellan died in battle, in Cebu in the Philippines; on November 8, 1521, two years and three months after leaving Spain, the expedition arrived in the Moluccas Islands in Indonesia. 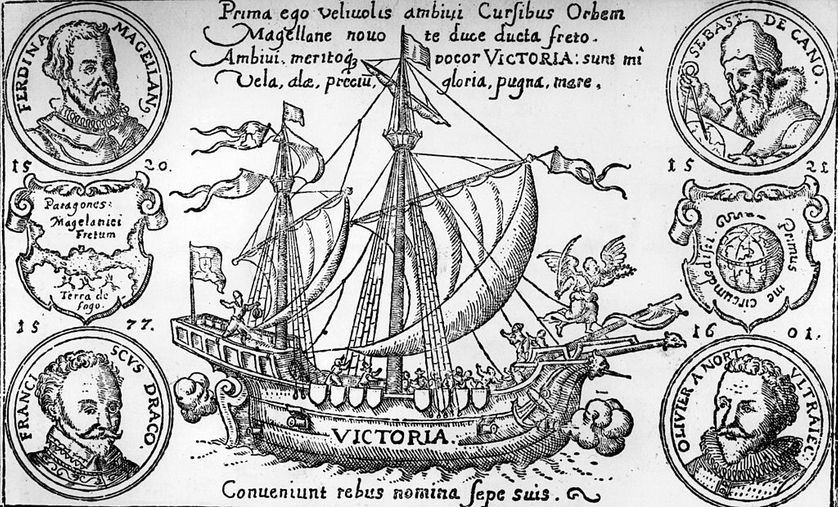 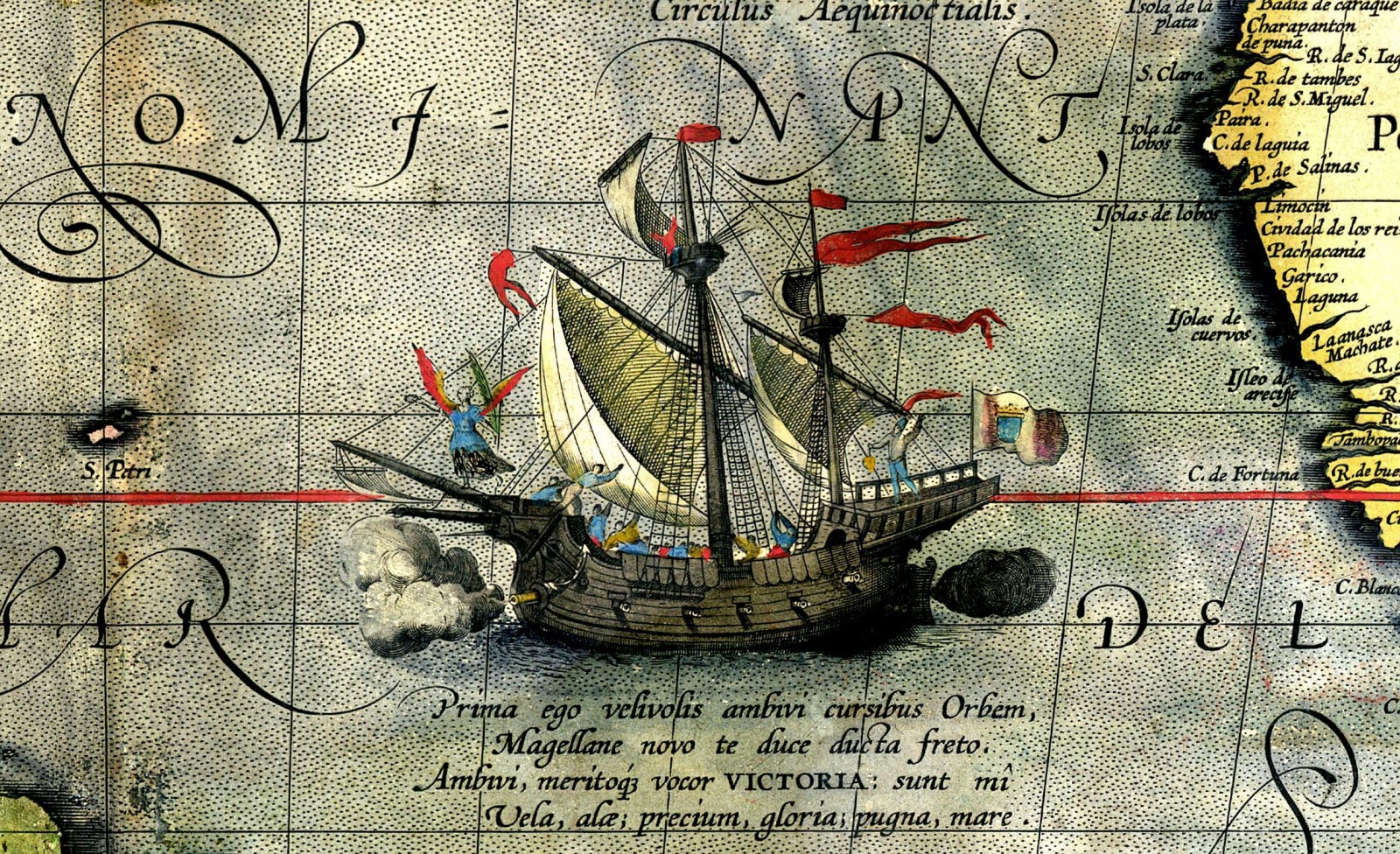 In September 1519, Magellan left Spain with a fleet of five ships.
Three years later, only one of them, the Victoria (painted here on a 1590 map), returned to Spain after circumnavigating the world.

On January 25, 1522, Elcano set out for home on the last surviving ship from Timor on a direct journey westward across the Indian Ocean.
In the spring of that year, he rounded the Cape of Good Hope. Afterwards, he would reach Cape Verde and the Canary Islands. And, on September 8, he docked in Seville.

Facsimile of the map attributed to Jorge Reinel, who joined Magellan in Seville - Credits: Gallica/BNF
Mapping the New World

The Google Arts & Culture collection has managed to reproduce high quality cartographic maps that show the transformation of Europe’s vision of the planet after Elcano and Magellan’s expedition.
For example, Juan Vespucio’s 1526 map already incorporates the Straits of Magellan, although he calls it Sant Anton.
see also : Google Art & Culture : Portuguese nautical chart (ca.1472)
Links :
Posted by geogarage at 1:52 AM