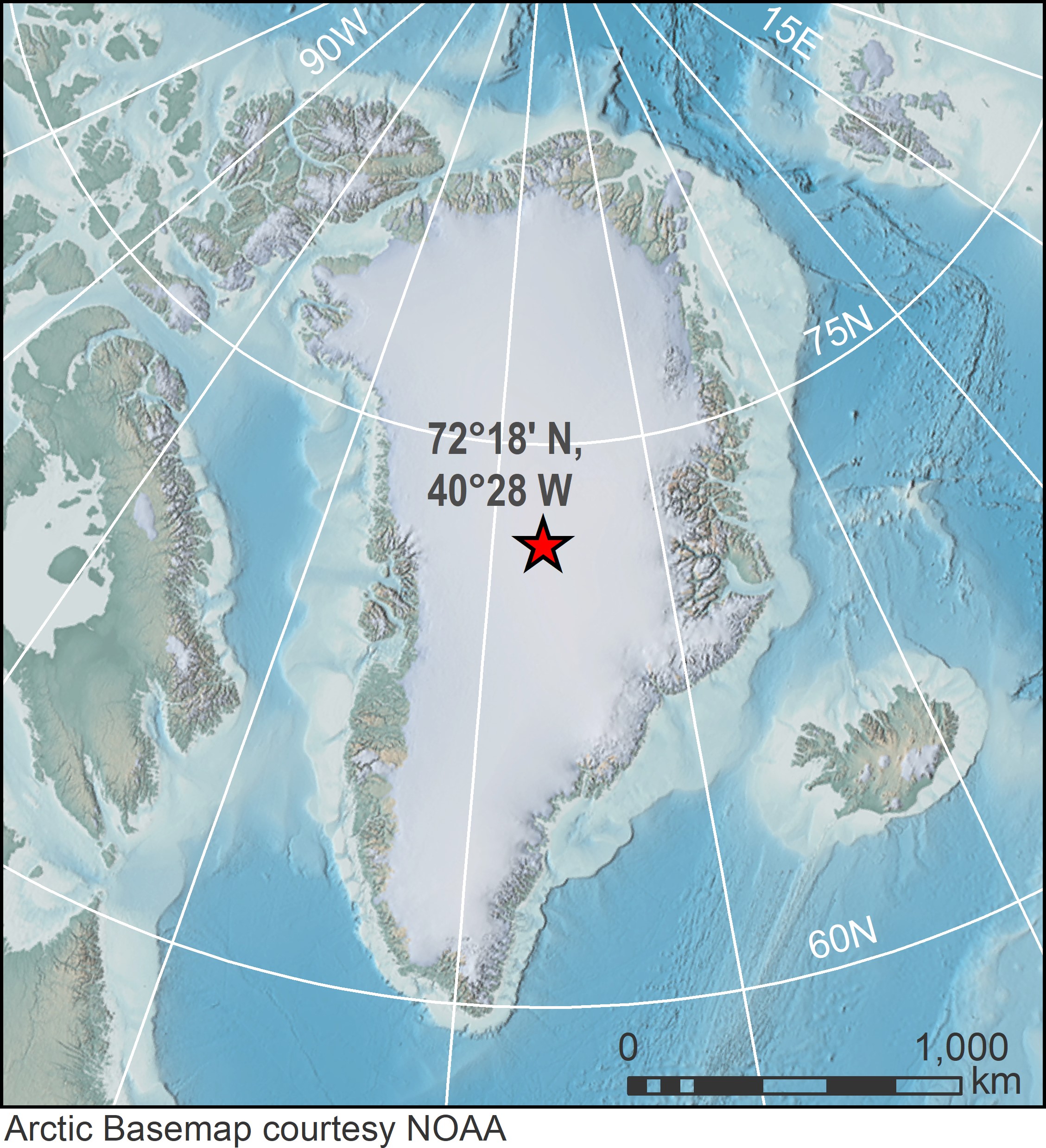 In an article released online today (Wednesday 23 September, 2020) in our Quarterly Journal, the World Meteorological Organization has recognised a temperature of -69.6°C (-93.3°F) at an automatic weather station in Greenland on 22 December 1991 as the coldest ever recorded in the Northern Hemisphere.

It eclipses the -67.8°C recorded in 1892 in Russia's #Verkhoyanksk, which this year reported a temperature of +38°C on 20 June during Siberia's heatwave.
❄️ 🌡️https://t.co/qX05pdhjgC pic.twitter.com/vEjoqx2g3R
— World Meteorological Organization (@WMO) September 23, 2020

The temperature record was uncovered after nearly 30 years by “climate detectives” with the WMO Archive of Weather and Climate Extremes.
It eclipses the value of -67.8°C recorded at the Russian sites of Verkhoyanksk (February 1892) and Oimekon (January 1933).
The world’s coldest temperature record, of -89.2°C (-128.6°F) on 21 July 1983, is held by the high-altitude Vostok weather station in Antarctica. 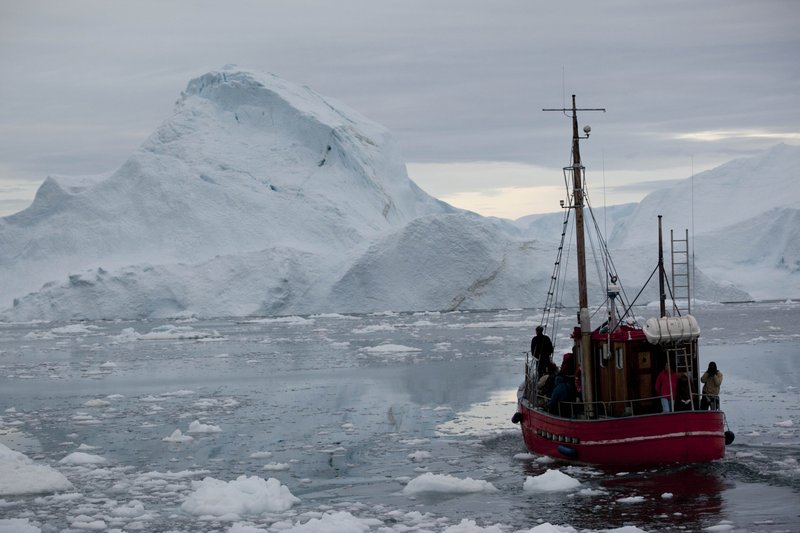 In this July 18, 2011 file photo, a boat steers slowly through floating ice, and around icebergs, all shed from the Greenland ice sheet, outside Ilulissat, Greenland. Climate historians hunting for past temperature extremes have unearthed what the U.N. weather agency calls a new record low in the Northern Hemisphere.
The World Meteorological Organizations publicly confirmed Wednesday Sept. 23, 2020, the all-time cold reading for the hemisphere: -69.6 Celsius recorded on Dec. 22, 1991 at an automatic weather station in a remote site called Klinck, not far from the highest point on the Greenland Ice Sheet
(AP Photo/Brennan Linsley, File)

The weather station at Verkhoyanksk, which previously held the northern hemisphere cold temperature record, hit the headlines when it recorded a temperature of 38°C on 20 June during a prolonged Siberian heatwave.
WMO is currently verifying whether this is a new record high temperature north of the Arctic Circle (a new category for the archive).
That ongoing investigation, following the lead of this evaluation, will also examine possible past occurrences of high temperatures north of the Arctic Circle.

“In the era of climate change, much attention focuses on new heat records.
This newly recognised cold record is an important reminder about the stark contrasts that exist on this planet.
It is testimony to the dedication of climate scientists and weather historians that we are now able to investigate many of these older records and secure a better global understanding of not only current, but also historical, climate extremes,” said WMO Secretary-General Professor Petteri Taalas.

While most climate extreme observations evaluated by the WMO’s Archive of Weather and Climate Extremes have been made within the last few years, occasionally climate historians uncover long overlooked weather data that contain important climate information that must be analysed and verified.
Such was the case with the just-concluded evaluation of a nearly 30-year-old weather record of an automated weather station at the remote Greenland site named Klinck, located at an elevation of 3,105 metres close to the topographic summit of the Greenland Ice Sheet. 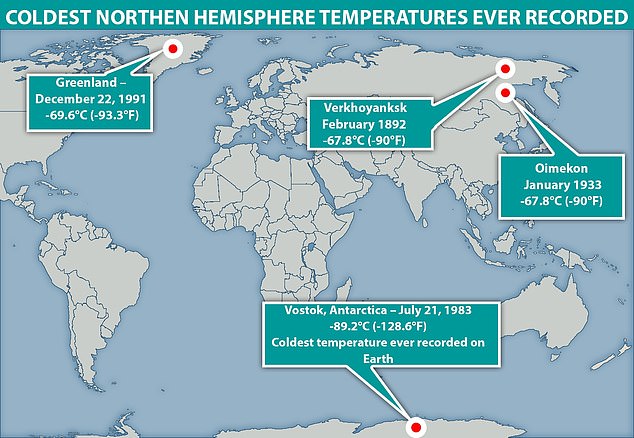 The automatic weather station operated for two years in the early 1990s as part of a network established by the University of Wisconsin-Madison to record the meteorological conditions around the Greenland Crest during the Greenland Ice Sheet Project.
In 1994 it was returned to the laboratory for testing and then sent for use in the Antarctic.

This was before WMO began evaluating global extremes, as the World Weather and Climate Extremes archive was established in 2007.
The record came to light only after a WMO blue-ribbon international panel of polar scientists tracked down the original scientists involved.
The committee commended the station’s original project scientists in the careful maintenance of the calibrations and metadata for an observation made so long ago.
Such diligence indicates a high degree of detail and quality of observation.

After extensive analysis of the equipment, observation practices and the synoptic weather situation of December 1991, the panel unanimously recommended acceptance of the observation as valid.

“This investigation highlights the ability of today’s climate scientists to not only identify modern climate records but to play "climate detective" and uncover important past climate records - thereby creating a high-quality long-term record of climate for climate-sensitive regions of the world,” said Professor Randall Cerveny, Rapporteur of Climate and Weather Extremes for WMO.

The WMO investigations also serve to improve the quality of observations through the careful analysis of observation practices and proper equipment selection.

All components of the Automatic Weather Station had to be selected to be able to function in extremely cold conditions, according to George Weidner, who helped design the station.

“On Greenland, all of the sites were installed by snowmobile.
So the Automatic Weather Station had to be packed to survive a traverse over very rough snow surfaces.
Years of packing experience in Antarctica helped us keep our Automatic Weather Station safe and snug on the sleds being pulled by the snowmobiles,”he said.
A.
Unaltered Klinck AWS photograph as photographed in 1994 during a maintenance check.
Photograph by Mark Seefeldt.
B.
Annotated 1990 Klinck AWS installation photograph: a) air temperature probe at 3.3 metres after installation, b) 2.0 – 2.2 metres above snow surface (at time of time of 22 Dec.
1991 -69.6°C temperature observation), c) estimated snow level in July 1992, d) estimated snow level at time of 22 Dec. 1991 -69.6°C temperature observation, and d) lower temperature probe installed at ~0.9 metre above snow surface at installation (became buried in September 1991, based on the AWS data).
Photograph by Dr. Julie Palais

The WMO international evaluation committee consisted of polar science and climate experts from Denmark, Spain, the United Kingdom and the United States.