A team of seismologists and oceanographers has shown that small earthquakes repeatedly emanating from the same spot beneath the ocean floor can help measure changes in ocean temperature.
The quakes generate reliable acoustic signals for measuring ocean temperatures, including at depths below 2000 meters, beyond the reach of other techniques.
If validated, the approach, published this week in Science, could open an entirely new ocean observation system for understanding past and future climate change, says Frederik Simons, a geophysicist at Princeton University unaffiliated with the study.
“There’s a potential treasure trove of data waiting to be analyzed.”

From CleanTechnica by Steve Hanley

Almost every vehicle has a cooling system.
Whether it uses a internal combustion engine or an electric motor, it creates heat while in operation and that heat must be managed to keep the machinery working properly.
If it is not, the radiator may boil over or the battery could catch fire.
Either way, the consequences may be catastrophic.
The world’s oceans are the cooling system for the Earth.
In fact, they absorb up to 95% of the excess heat in the atmosphere.
And if the oceans overheat, the consequences for humanity will be dire indeed.

In 1951, Rachel Carson published The Sea Around Us, a beautifully written book about the oceans that explained in plain language everything we knew about them at the time.
I read it over the past summer and learned much that I didn’t know about the ocean.
In truth, even though people have stood on the moon since then, our knowledge of the deep oceans has advanced hardly at all since Carson’s book was published.

Oceanographers now have access to the ARGO system, a collection of buoys that can descend up to 2000 meters to measure things like salinity and temperature then rise to the surface where solar powered transmitters send the data to oceanographers around the world.
ARGO is a powerful tool but it covers only a tiny portion of the world’s oceans.
Now scientists at CalTech say they have devised a system that could provide data about deep ocean temperatures and track changes going back decades. 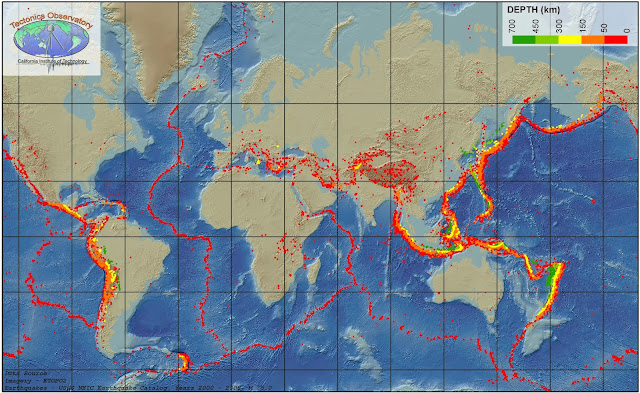 A global map of earthquake activity.
The earthquakes occur at the boundaries between Earth's tectonic plates.
The colors indicate the depth of the earthquakes, with red being the shallowest and green the deepest. [USGS earthquake catalogue from 2000 to 2008, magnitude of 5.0 M and above.]

How is that possible?
When you hear a siren in the distance, the sound gets higher if the source is getting closer to you, lower if it is going away.
That is known as the Doppler shift.
That shift can be decoded electronically to determine how fast the source of the sound is travelling.
What the scientists at CalTech discovered is that the sounds of undersea earthquakes travel great distances through the water.
But how fast they travel is a function of the temperature of the water they are travelling through.
Carefully measure the amount of time it takes for those sounds to travel underwater and you can calculate the temperature of the water.

And here’s the kicker.
There are recordings of those sounds from some areas of the world that go back decades, so now for the first time it is possible to perform the necessary calculations over a significant period of time and plot the changes.
Jörn Callies is an assistant professor of environmental science and engineering at Caltech and co-author of a study published in the September 18 edition of Science.
He says earthquake sounds are powerful and travel long distances through the ocean without significantly weakening, which makes them easy to monitor.

Wenbo Wu, postdoctoral scholar in geophysics and lead author of the paper, explains that when an earthquake happens under the ocean, most of its energy travels through the earth but a portion of it is transmitted into the water as sound.
These sound waves propagate outward from the quake’s epicenter just like seismic waves that travel through the ground, but the sound waves move at a much slower speed.
As a result, ground waves will arrive at a seismic monitoring station first, followed by the sound waves, which will appear as a secondary signal of the same event.
The effect is roughly similar to how you can often see the flash from lightning seconds before you hear its thunder. “These sound waves in the ocean can be clearly recorded by seismometers at a much longer distance than thunder — from thousands of kilometers away,” Wu says.
“Interestingly, they are even ‘louder’ than the vibrations traveling deep in the solid Earth, which are more widely used by seismologists.” The speed of sound in water increases as the water temperature rises, so the length of time it takes a sound to travel a given distance in the ocean can be used to deduce the water’s temperature.

“The key is that we use repeating earthquakes — earthquakes that happen again and again in the same place,” Wu adds.
“In this example we’re looking at earthquakes that occur off Sumatra in Indonesia and we measure when they arrive in the central Indian ocean.
It takes about a half hour for them to travel that distance, with water temperature causing about one tenth of a second difference.
It’s a very small fractional change, but we can measure it.”

Because the researchers are using a seismometer that has been in the same location in the central Indian Ocean since 2004, they can look back at the data it collected each time an earthquake occurred in Sumatra, for example, and determine the temperature of the ocean at that time.
“We are using small earthquakes that are too small to cause any damage or even be felt by humans at all,” Wu says.
“But the seismometer can detect them from great distances, thus allowing us to monitor large scale ocean temperature changes on a particular path in one measurement.”

The process can detect temperature changes as little as a thousandth of a degree.
Using just the data from the Sumatra area, the researchers say the temperature of the Indian Ocean has risen 0.044 degrees Celsius over the past decade, a result that correlates well with the data provided by the ARGO network.
In fact, the preliminary findings suggest the oceans are warming faster than predicted, although those results are preliminary.

The new research tool is “quite extraordinary and very promising,” says Susan Wijffels, a leader of the ARGO project at the Woods Hole Oceanographic Institute.
What excites here about the new technique is that it allows researchers to examining old seismic records that predate the beginning of the ARGO project.
“What a gift to the climate community that would be,” she says.

Because undersea earthquakes happen all over the world, Callies thinks it should be possible to expand the system to monitor water temperatures in all the world’s oceans..”We think we can do this in a lot of other regions and by doing this, we hope to contribute to the data about how our oceans are warming.” Wu adds that because the technique makes use of existing infrastructure and equipment, it would be quite inexpensive to implement on a global basis.

Of course, having such information available is one thing.
Acting on it is another.
In today’s world, there are any number of powerful corporations who prefer to put masking tape over any global temperature gauge to disguise the danger ahead.
They are only too happy to put profits ahead of people, little realizing that if there are no people, there will be no profits.
There is also an anti-science cult that actively denigrates any and all science.
Either of those forces could delay action to address the factors causing our planet to overheat to the point where corrective action becomes impossible.

Knowing how ocean temperatures are rising is vital information but overcoming the cabal of ignorance and stupidity dedicated to ignoring global heating is even more important.
In the upcoming election, vote as if your life depends upon it, because it does.