35 years of submarine cables in one map

The 400 or so submarine cables weave an invisible yet crucial network of the contemporary world. 1.3 million km long, they are essential to the smooth functioning of the Internet and host 99% of our intercontinental exchanges.

From VisualCapitalist by Nick Routley

You could be reading this article from nearly anywhere in the world and there’s a good chance it loaded in mere seconds.

Long gone are the days when images would load pixel row by pixel row. Now, even high-quality video is instantly accessible from almost everywhere. How did the internet get so fast? Because it’s moving at the speed of light. 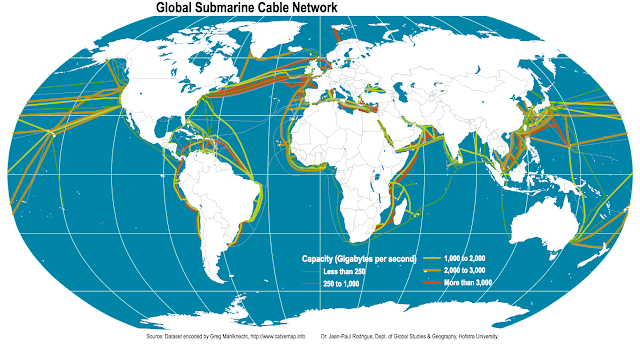 The miracle of modern fiber optics can be traced to a single man, Narinder Singh Kapany.
The young physicist was skeptical when his professors asserted that light ‘always travels in a straight line’.
His explorations into the behavior of light eventually led to the creation of fiber optics—essentially, beaming light through a thin glass tube.

The next step to using fiber optics as a means of communication was lowering the cable’s attenuation rate.
Throughout the 1960-70s, companies made gains in manufacturing, reducing the number of impurities and allowing light to cross great distances without a dramatic decrease in signal intensity.

The first intercontinental fiber optic cable was strung across the floor of the Atlantic Ocean in 1988.
The cable—known as TAT-8*—was spearheaded by three companies; AT&T, France Télécom, and British Telecom.
The cable was able to carry the equivalent of 40,000 telephone channels, a ten-fold increase over its galvanic predecessor, TAT-7.

Once the kinks of the new cable were worked out, the floodgates were open.
During the course of the 1990s, many more cables hit the ocean floor.


Deep on the ocean floor you will find communication cables made to carry signals from one land to another.
The first undersea communications cables, laid in the 1850s, carried telegraphy.
Now these cables carry our phone and Internet traffic.
Yet, they remain relatively hidden in the depths of the ocean.

By the dawn of the new millennium, every populated continent on Earth was connected by fiber optic cables.
The physical network of the internet was beginning to take shape.

From 2016-2020, over 100 new cables were laid with an estimated value of $14 billion.
Now, even the most remote Polynesian islands have access to high-speed internet thanks to undersea cables.

*TAT-8 does not appear in the video above as it was retired in 2002.
The Shifting Nature of Cable Construction

Even though nearly every corner of the globe is now physically connected, the rate of cable construction is not slowing down.

This is due to the increasing capacity of new cables and our appetite for high-quality video content.

New cables are so efficient that the majority of potential capacity along major cable routes will come from cables that are less than five years old.

Traditionally, a consortium of telecom companies or governments would fund cable construction, but tech companies are increasingly funding their own submarine cable networks.

Amazon, Microsoft and Google own close to 65% market share in cloud data storage, so it’s understandable that they’d want to control the physical means of transporting that data as well.

These three companies now own 63,605 miles of submarine cable.
While laying cable is a costly endeavor, it’s necessary to meet surging demand—content providers’ share of data transmission skyrocketed from around 8% to nearly 40% over the past decade.
A Bright Future for Dark Fiber

At the same time, more aging cables will be taken offline.
Even though signals are no longer traveling through this network of “dark fiber”, it’s still being put to productive use.
It turns out that undersea telecom cables make a very effective seismic network, helping researchers study offshore earthquakes and the geologic structures on the ocean floor.