Ravenous wild goats ruled this island for over a century. Now, it's being reborn.

The island of Redonda, once thought doomed by ravenous goats and rats.
photo : by Ed Marshall, Redonda Restoration Programme

The rocky island of Redonda, once stripped of its flora and fauna by invasive species, makes an astonishingly quick comeback.
What’s the secret to its recovery?

It takes four hours to sail to Redonda, but only two minutes of wandering around here before the first dragon appears.

This tiny, secluded island in the Caribbean West Indies, an imposing piece of old volcano ringed by hundred-foot cliffs, is covered with bushes and knee-high grass that can obscure some of the unusual species that call it home.
The nests of various boobies and frigate birds are scattered amidst the greenery underfoot, while their owners dot the sky overhead by the dozens.
Tree lizards and pygmy geckos, both native to the island, linger in nearby patches of shade.
And the Redonda ground dragon, a rare, six-inch, all-black lizard, is even bolder: I stop walking for a few seconds and lean against the rusted remains of a cable head, and an entire lounge of them emerges and runs across my sneakers. 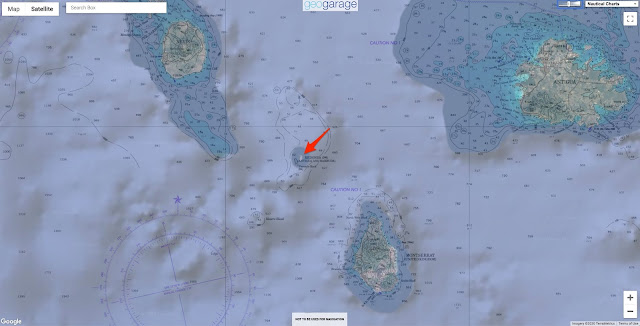 It wasn’t always this way.
In fact, if you’d visited Redonda even five years ago—no easy feat, then or now—you’d have seen a place that locals from nearby Antigua (of which Redonda is technically part) had written off as a dying island falling into the sea.
For a half century in the late 19th and early 20th centuries, Redonda bustled with activity as the site of a mine that used a large pulley system to lower buckets of guano and phosphates—used as fertilizer—down to the shoreline below.
More than 100 men were employed at the mine’s peak, most of whom lived full time on the island.

But the mine shut down following the outbreak of World War I, and two critical things were left behind: goats and rats.
For the next hundred years, these foreign species would team up to eat everything in sight until there was nothing left but dust and scraps of old machinery.

In recent years, however, a stunning ecological turnaround has taken place on Redonda at a rate faster than even its most optimistic supporters could have imagined.
For many people, “rewilding” brings to mind a quiet and passive process, like stepping away from a garden to let the natural weeds back in.
For the Redonda Restoration Programme, rewilding has been a more complicated journey involving helicopters, goats wrapped in plastic, mountaineers armed with rat poison, and protective gear made out of pool noodles and yoga pants.

Long gone? Not so fast.

“By and large, conservation in Antigua is seen as an elitist thing,” says Natalya Lawrence, a coordinator with the non-profit Environmental Awareness Group, which oversees the Redonda restoration project.

The Redonda tree lizard (Anolis nubilus), one of the reptiles that rebounded after invasive species were removed from the island.
photo by Ed Marshall

“If you have money, you can be concerned with trees and lizards.
But if you need a dollar today to feed your children today, you don’t really have time to see the long-term effects.”

The EAG was started in the late 1980s and has since grown to include many restoration projects in and around Antigua.
Over the past few decades, they’ve managed to eradicate rats from more than a dozen islands in the area.
Still, Redonda, which looms on the southwest horizon, was always the organization’s dream project.
And finally, in 2016, after multiple rounds of stakeholder consultations and feasibility studies, a group of volunteers set up camp on the island’s main plateau and got to work.

Goats on Redonda before they were airlifted to Antigua.

The first step was relocating Redonda’s herd of approximately 60 wild goats.
Volunteers went in with a plan, but after two months they’d only managed to capture a single animal.
“Those goats were so smart,” remembers Shanna Challenger, coordinator for the Redonda Restoration Programme, with a laugh.
“They would look at our snares, and jump over them.”

Lures of food and fresh water had no effect, either.
In the end, a larger group of workers managed to round up the goats by hand and transport them off of the island via helicopter.
To keep them calm, each goat was placed up to its neck in a plastic bag, was blindfolded with a hood made of old yoga pants, and had its horns protected with foam pool noodles for the 20-minute flight back to Antigua.

At the same time, that larger group (which included representatives from several organizations, including Fauna and Flora International and Wildlife Management International) was also tasked with eradicating the roughly 6,000 black rats that had infested every corner of the island.
Those rats were big and they were voracious: By the time workers returned to check on their poisoned traps, other rats had already started eating their dead brethren.
And because so much of Redonda is virtually inaccessible to humans, the EAG also hired climbers from the British Mountaineering Council to scale the cliffs and plant poison in the island’s hardest-to-reach nooks and crannies.

Once the goats and rats were officially gone, the EAG decided to wait to see what kinds of regrowth would happen naturally before taking further action.
As it turned out, they didn’t need to do much of anything.
Within a year, land-bird populations had increased tenfold.
Rare endemic species like the ground dragon and tree lizard have seen their populations spike as well.
Even the color of the island itself has changed, from brown to green, as the native grasses and trees have returned more quickly than expected.
A study from 2012 counted 17 different types of vegetation growing on Redonda; the latest count, from 2019, showed 88.

Plans for the future

As with many conservation projects, there’s no such thing as a hard-and-fast completion date.
While human visitors to Redonda remain few and far between, the EAG continues to monitor the island to make sure that the regrowth continues apace, and that rats or other invasive species don’t suddenly reappear.
A plan to turn Redonda and its surrounding waters into a permanent nature reserve, meanwhile, is currently before the Antiguan government.

Either way, for the EAG, Redonda is already a capstone in decades of rewilding work.
The speed of the island’s regrowth demonstrates not only that conservation is effective, but also that even the most seemingly barren places can be saved.
“With a little bit of help,” Challenger says, “nature can recover.”

Lawrence says she hopes that people around the world will admire Redonda, but also understand and celebrate all of the hidden work that goes into a rewilding project of this scale.
It’s easy, she says, for people to marvel at how beautiful an island is.
“But they don’t know the work that goes into keeping it that way.”