A new consequence of Arctic Sea Ice melt: changing weather at the Equator 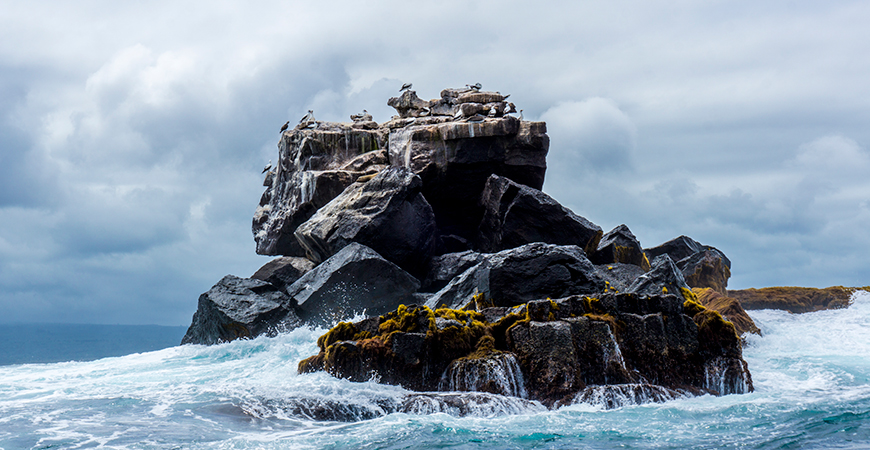 The weather these seabirds experience on the Galapagos' Isabela Island may be influenced by Arctic sea ice melt. Photo: Ryan Cox

From Scripps by Robert Monroe

Two researchers present evidence today in the journal Proceedings of the National Academy of Sciences that the accelerating melt of Arctic sea ice is linked to weather patterns near the equator in the Pacific Ocean.

Charles Kennel, a physicist and the former director of Scripps Institution of Oceanography at UC San Diego, and colleague Elena Yulaeva said there is strong evidence that the ice melt sets a chain of events in motion that sends cold air equatorward in the upper atmosphere.
The two used computer analysis of historical data to identify which atmospheric phenomena also change as Arctic ice diminishes, as it has steadily since 1999.
Among the variables that seemed to move in lockstep with ice melt were intensifying trade winds at the equator in the Central Pacific Ocean.
The study marks the first time that researchers have looked at both world regions together in this context.

“There’s a definite relationship and a change in tropical Pacific climate,” said Kennel.
“There’s now a network of consistent correlations.”

The Pacific Ocean is considered one of the biggest, if not the biggest, drivers of global climate.
What originates in the Pacific, including patterns of warm equatorial water known as El Niño and La Niña, affects weather experienced on every continent.
Thus the melt of Arctic sea ice could have a global reach by influencing the influencer of weather set in motion around the world.

Sea ice melt affects climate by first raising the temperature of surface water in the Arctic Ocean. While most sunlight bounces off the ice, the dark water absorbs about 93 percent of sunlight “like applying a flame at the bottom of the atmosphere,” Kennel said.

The warmth creates convection of air that reaches the boundary of the troposphere and the stratosphere above it.
The air has nowhere to go but south.
This movement goes hand in hand with contortions of typical weather patterns that have caused frigid “polar vortex” weather in the U.S. Midwest and deadly flooding in Asia in recent years.

Though many researchers had thought that air originating in the Arctic couldn’t make it to the equator, Kennel and Yulaeva said their work suggests it does.

One consequence is that the nature of El Niño storms changes. Classical El Niños feature build-ups of warm water at the eastern end of the Pacific Ocean off South America.
Kennel and Yulaeva’s analyses indicate that El Niños starting in the Central Pacific Ocean are the ones that respond to the arrival of Arctic air near the equator.
Kennel suggested that since so much of California’s rain comes from atmospheric river storms that develop in the Central Pacific, the Arctic-Tropics connection merits further study.
He added that their research suggests but does not rigorously demonstrate that changes in Arctic sea ice are causing changes at the equator.
It does, however, “point the way toward studies that could do that,” he said.