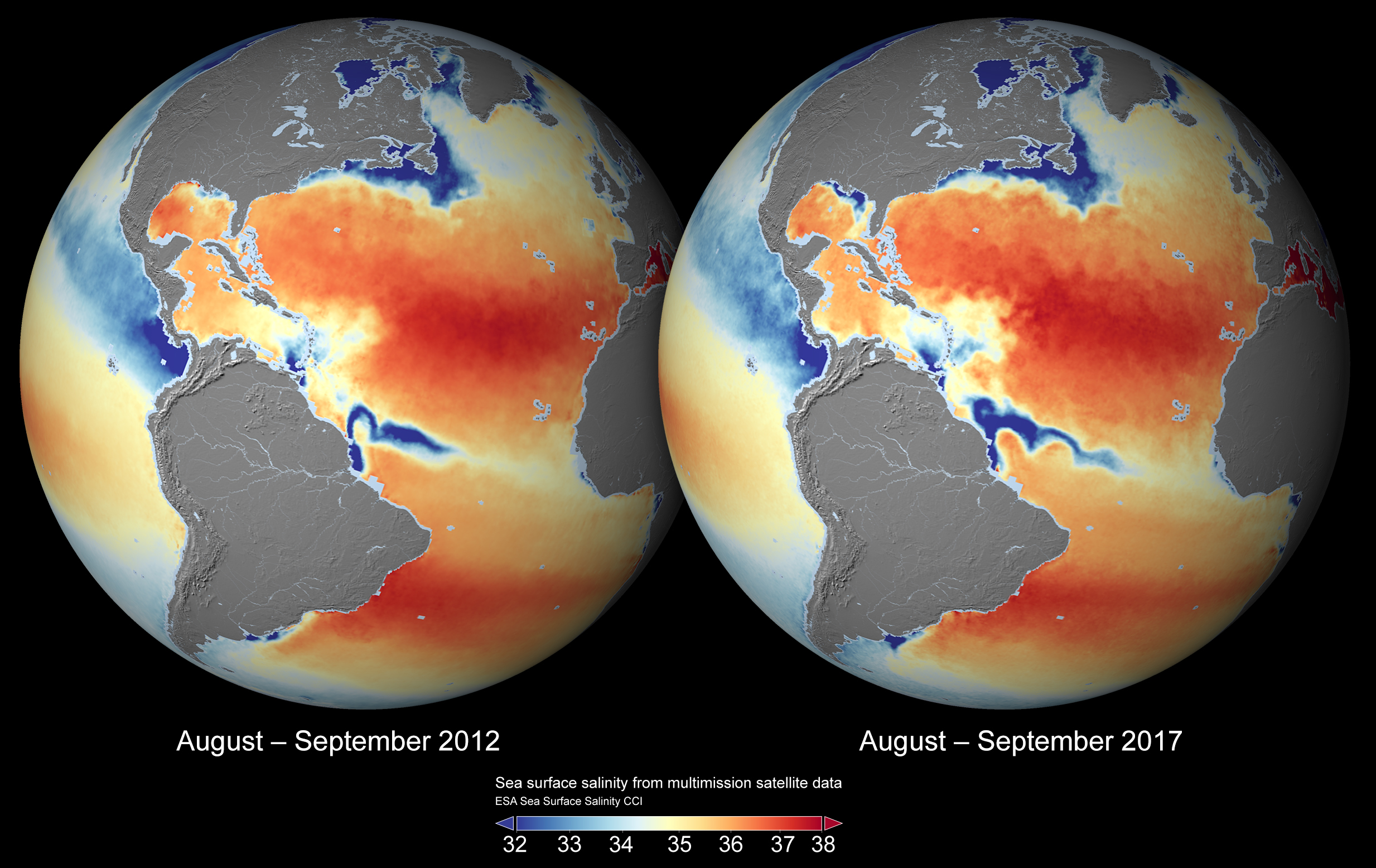 Since the saltiness of ocean surface waters is a key variable in the climate system, understanding how this changes is important to understanding climate change.
Thanks to ESA’s Climate Change Initiative, scientists now have better insight into sea-surface salinity with the most complete global dataset ever produced from space.

If you’re a keen sea-swimmer, you may have noticed that the water can be saltier in some places than others.
This is because the saltiness of the water depends on nearby additions of freshwater from rivers, rain, glaciers or ice sheets, or on the removal of water by evaporation.

The salinity of the ocean surface can be monitored from space using satellites to give a global view of the variable patterns of sea-surface salinity across the oceans.

Unusual salinity levels may indicate the onset of extreme climate events, such as El Niño.
Global maps of sea-surface salinity are particularly helpful for studying the water cycle, ocean–atmosphere exchanges and ocean circulation, which are all vital components of the climate system transporting heat, momentum, carbon and nutrients around the globe.

A new and ongoing project for ESA’s Climate Change Initiative (CCI) – a research programme dedicated to generating accurate and long-term datasets for 21 Essential Climate Variables, required by the United Nations Framework Convention on Climate Change and the Intergovernmental Panel on Climate Change – has generated the most complete global dataset of sea-surface salinity from space to date.

“The project aims to make a significant improvement to the quality and length of the datasets available for monitoring sea-surface salinity across the globe,” says Susanne Mecklenburg, head of ESA’s Climate Office.
“We are keen to see this new dataset used and tested in a variety of applications, particularly to improve our understanding of the fundamental role that oceans have in climate.” 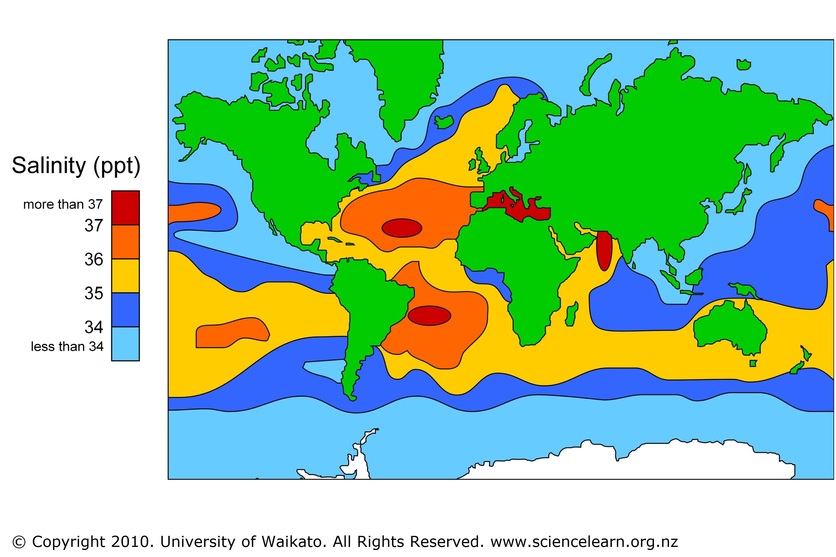 The research team, led by Jacqueline Boutin of LOCEAN and Nicolas Reul of IFREMER, has merged data from three satellite missions to create a global timeseries that spans nine years, with maps produced every week and every month at a spatial resolution of 50 km.

Dr Boutin said, “By combining and comparing measurements between the different sensors, the team has been able to improve the precision of maps of sea-surface salinity by roughly 30%.”

Salinity measurements taken since the 1950s indicate that globally, the more saline areas of the ocean are becoming saltier, and the freshwater areas are becoming fresher.
The data for this, however, are relatively coarse, taken by ships.

It is only since the beginning of the 21st century that ocean floats called Argo have been installed, on average every 300 km, to provide subsurface salinity vertical profiles between approximately 5 m and 2000 m depth at 10-day intervals.

“Monitoring salinity from space helps to resolve spatial and temporal scales that are poorly sampled by in situ platforms that make direct observations, and fills gaps in the observing system,” says Dr Boutin.

Ocean–atmosphere exchanges are driven by winds around the globe, as well as by exchanges between the surface and subsurface ocean owing to changes in the density of the water itself.
Water density depends on both temperature and salinity.
Warm water is less dense than cold water, but salty water is denser than freshwater.
At depth, ocean circulation is powered by differences in density between masses of water.


As carbon dioxide builds up in the atmosphere, increasing amounts of carbon are entering the world’s oceans, which is changing the chemical balance of seawater and leading to ocean acidification.
Marine chemistry can be studied using four parameters: partial pressure of carbon dioxide in the water; dissolved inorganic carbon; alkalinity; potential of hydrogen (pH).
Two of these parameters, along with measurements of salinity and temperature, allow us to understand the complete carbon chemistry of the ocean.
Salinity and temperature can be detected from space by their effect on electromagnetic emissions from the ocean surface.
ESA’s SMOS mission provides information on ocean salinity – a key piece of the puzzle.

To demonstrate the benefits of the new dataset, ESA’s CCI Sea Surface Salinity project is carrying out a number of climate studies.
These are focused on an improved understanding of the water cycle in the Bay of Bengal, an area prone to severe tropical cyclones, and in the Gulf of Guinea; on understanding the role of salinity on the stratification of the upper layer of the ocean and its effect on the air–sea exchanges; and on a climate variability reconstruction in the Atlantic that encompasses the recently-observed North Atlantic salinity anomaly.

The team is currently working with climate scientists to compare the new dataset with in situ observations from Argo floats and ships, and with the output from models.

The dataset is freely available for download from the CCI Open Data Portal.